Almost Home: What to Expect Midway Through Custom Building Projects 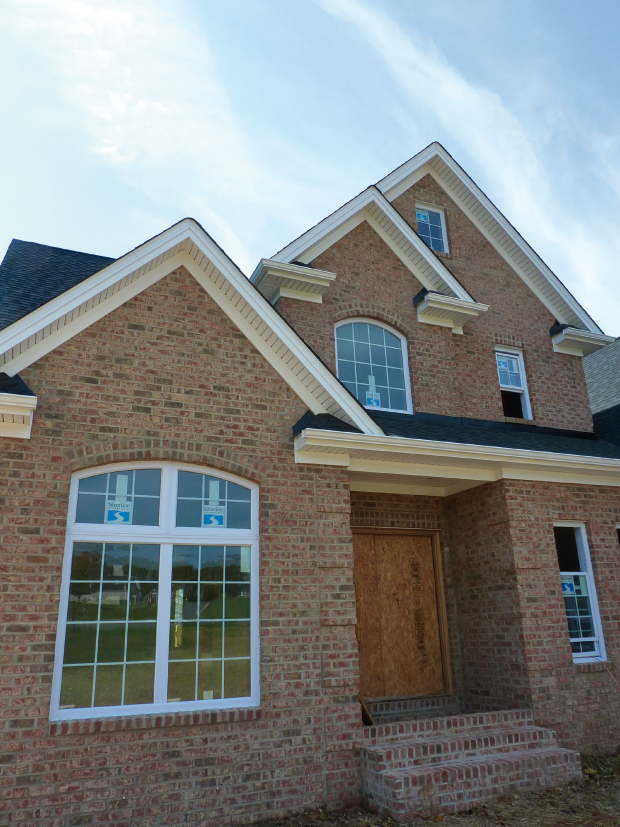 In our Fall 2011 issue, we introduced you to Linda and Reggie Lynch as they embarked on building the custom home of their dreams, and we explored the ins and outs of choosing this home-buying process. Here, enjoy a progress report on our featured couple’s home and learn more about what to expect when you’re “almost there.”

Building a custom home with the help of new home building contractors can take a good bit of time, so the midway point can be a particularly exciting time as you watch your new home take shape. Daily discussions pertaining to colors, light switches and all things interior are happening and replaying through your head. If you are like our model couple, the Lynches, these decisions have already been made. From switch plates to furnishings, Reggie and Linda Lynch know exactly what they want and where they want it to be. And now that their dream home is finally taking shape, they can sit back and watch with anticipation, waiting for moving day.
Not all homes progress this easily. Challenges certainly arise along the way. Experts will agree, though—and so will the Lynches—that one thing holds true: don’t sweat the small stuff. To achieve the highest satisfaction, it’s important to keep expectations in line, and to be able to compromise, especially when the little things come up. 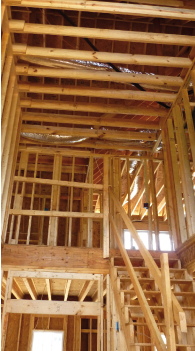 Avoiding Common Pitfalls
Scott Elliott of Lynchburg’s Custom Structures suggests that homeowners find a builder who will keep them calm and constantly updated on what is happening. He points out that some homeowners become fixated on this whole undertaking, and this can present difficulties. He emphasizes, “Trust your builder! Communication and trust make a project successful.”

This aspect has made the Lynch project go particularly well. “We have no issues with our builder,” says Linda. “Because of everything we did up front, it saved us from that. We did our homework, communication was good, and there is nothing that we cannot talk about with the builder.” Their builder, Gary Schmincke of Wellington Builders, Inc., agrees. “Communication throughout the process will minimize mistakes, and ultimately the homeowners will move into a home that they envisioned,”
he says.

The couple shares the same vision and has very similar tastes. However, Linda points out that there were times when she and her husband Reggie did not agree. When that happened, they turned to the experts for help making decisions, asking, “What makes this house more saleable? What do people want or look for?” Linda elaborates, “We don’t want the house to be so custom that no one else would ever want it!” 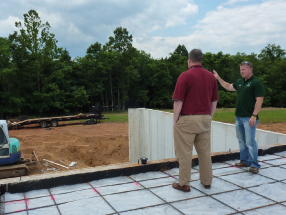 Contracts, Meetings Make A Difference
For easier progress, everyone must be on the same page, figuratively and literally. The contract should state clearly what is expected regarding standards of workmanship. John Vincent, of Lynchburg’s John Vincent, Custom Builder agrees. All the details should be in writing, including a list of specifications detailing how the work is to be done. Vincent calls this list his “recipe book.” Whenever a homeowner has any questions, he suggests, “First turn to the specs.” These will detail exactly what both parties have agreed upon.

If a problem cannot be resolved, there should be mechanics written into the contract to allow a fair value to be withheld until the project is completed as described. Scott Elliott emphasizes the importance of a contract that protects both the homeowner and the contractor. “There should be language in the contract that allows both parties to reconcile their differences,” says Elliott. “Be sure to set milestones.” According to Elliott, there are times when it is necessary for the builder and homeowner to part ways. The contract must enable both parties to agree
to disagree.

Throughout the construction process, it is important to schedule regular meetings between the contractor and homeowners. “Every Friday, we meet at the site with the builder,” says Reggie Lynch. Before each meeting, the couple prepares what topics to discuss and any changes that should be considered. “We bring a copy of the contract and all the specs,” he explains. “We talk about things that are coming up and what type of information they need to know from us.” 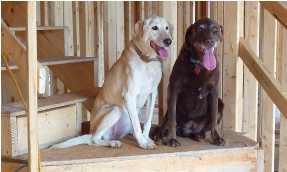 Linda keeps track of the construction schedule. She adds, “Reggie and I can go over the specs and make sure that everyone is on target.” According to Vincent, the start date and the completion date should be written into the contract. At each meeting there should be a progress report to evaluate the target dates and set future milestones. When will it be under roof? When will the windows be set? And when will it be roughed in? It is in everyone’s interest to be on target.

These meetings are not only important to keep updated on the progress, but they also allow the homeowners to communicate their concerns. “When you have an unsettling feeling about something, communicate it!” says Scott Elliott.

During the construction process, Linda has been available almost 24/7, and Reggie works locally and can break away for the Friday meetings. They say that their availability has been helpful. “I think that the process has been easier and quicker because I don’t work,” says Linda. This allows her to keep close tabs on progress, and report daily to her husband about issues to discuss or decisions to be made.

Construction at the Lynch home has been moving at a very fast pace. Nothing is slowing down their work. Only 70 days after breaking ground, the crew was already installing the sheet rock.

Know When to Stay Quiet
While all of this communication is certainly crucial to a successful project, it is also important that homeowners not overstep their boundaries, especially when directing comments to subcontractors. In fact, it is often written into the contract that homeowners cannot talk directly to subs. This can result in some confusion. For example, a homeowner may find the electrician stringing wires for outlets, and decide to add several outlets to the plan, telling the electrician directly. The sub completes the change, then charges the contractor. When the contractor passes on the charge to the homeowners, they may be irate because the job has gone over the agreed-upon price. 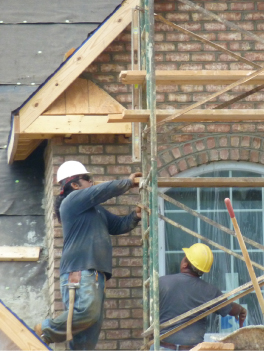 Choosing Big-Ticket Items
Bert Allen of Sidney B. Allen, Builder, Inc., explains that midway through the building process, a homeowner should begin to select the big ticket items. It is also the time to closely re-examine the budget and keep it on track. “Homeowners must recognize that any decision that they make can affect the appearance, price and timetable,” explains Allen.
He points out that some homeowners become overwhelmed with all the decisions that must be made in the building process, and recommends staying ahead of the game. The key is to be organized, he says. A delayed decision can slow down the project. “It’s a two-way street,” says Allen. Both the homeowner and the builder need to work together.
It is important to keep track of any changes and how these might affect the bottom line. According to Reggie, “When we decide on a change, the final price tab can go up or down.” He notes these changes and brings an addendum sheet to every Friday meeting. Keeping this running tab helps them stay within their budget. “So far we have not had any surprises,” says Linda.

“We both know what we like and what we want,” says Linda. “We made sure that it was all in the contract on the front end.” Before the Lynches even broke ground, everything was down on paper. Linda recommends that homeowners take it slow. “Never be in a hurry! It is so critical to do your homework, so that midway you do not discover that you cannot afford what you want.”

Building a custom home can be compared to a wedding. Both are significant events in our lives. While the construction of a home doesn’t hold the magnitude of a nuptial, there should be a close relationship between the contractor and homeowners. According to Scott Elliott, success is almost guaranteed if you find a team that feels right. Like a suitable marriage match, make sure that you can communicate with your contractor, and that you are both willing to listen to each other.

Have the confidence to trust your contractor, and recognize that respect and proper decorum should be followed throughout the process. Follow this formula and you are well on your way to a successful home-building experience. 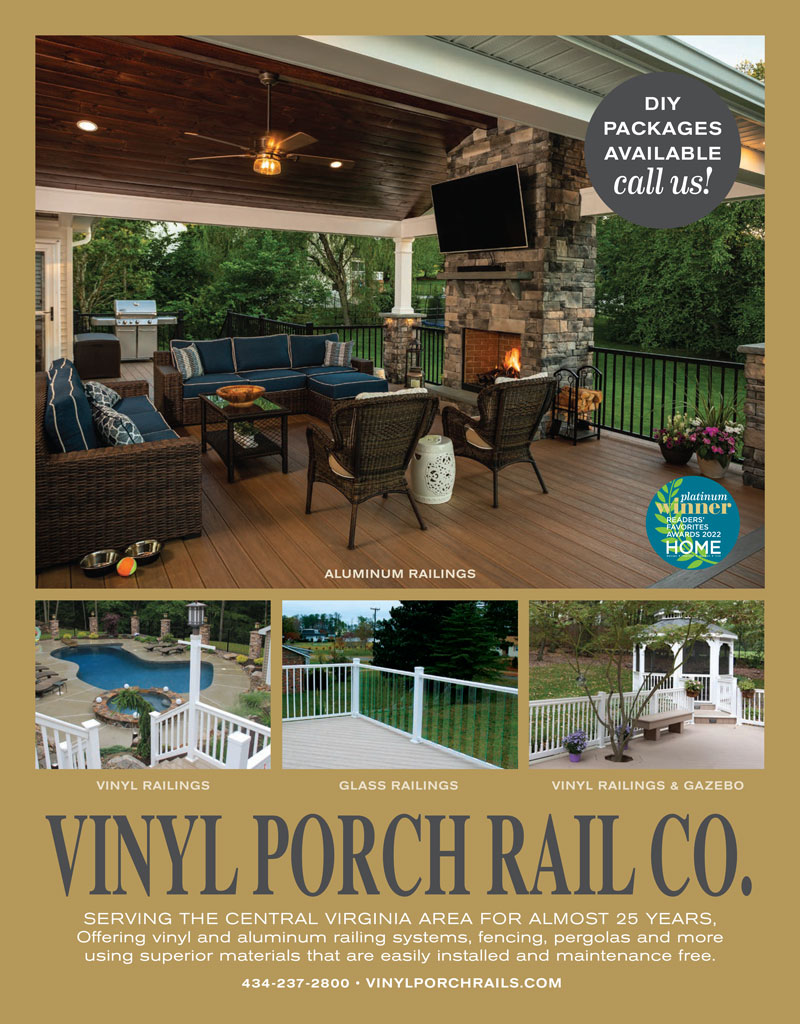