One With Nature: Architectural Delight Blends Home and Environment 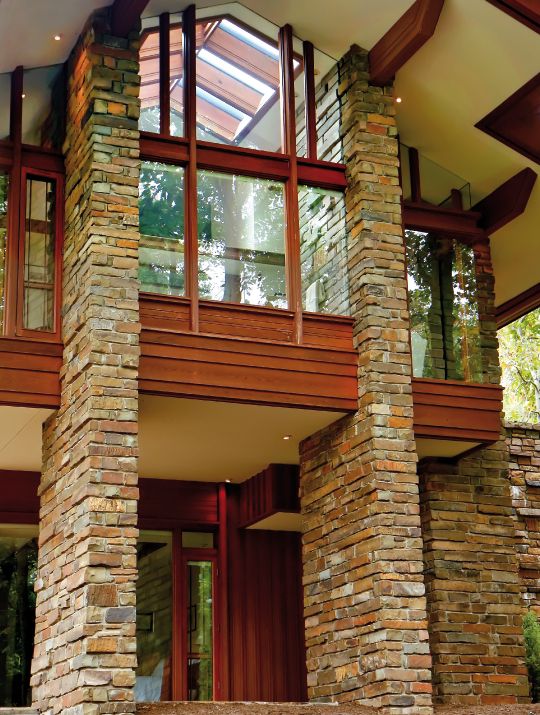 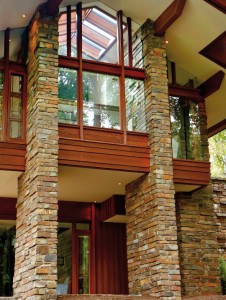 Rivergate stands alone as a remarkable example of contemporary architecture in the Lynchburg area. This spectacular estate is perched on a bluff 200 feet above the James River looking out toward Amherst’s Tobacco Row Mountain.

Originally built in 1999 for Harold Gordon Leggett and his late wife Patricia, the home was designed by the nationally known Arkansas architectural firm of Fay Jones and Maurice Jennings.

Strongly influenced by Frank Lloyd Wright, the firm adheres to the principles of organic architecture, which strive for harmony between structures and their natural surroundings. The designs characteristically demonstrate a generous use of natural light and materials.

Exactly why Rivergate is such a unique construction is quite clear when considering its designers and their philosophy. Euine Fay Jones was an apprentice of Frank Lloyd Wright. Like Wright, Fay Jones ignored the popular trends in architecture, preferring to focus on his own aesthetics. His belief that architecture should touch people in a certain way is evident in all of his work. His designs move the soul. Well known for his chapels, Jones’ most famous creation is the Thorncrown Chapel in Eureka Springs, Arkansas, which was selected as one of the best American buildings of the 20th century.

His buildings have a distinct presence and are both simple and transcendental. For 25 years, Maurice Jennings worked alongside Jones, and in 1986 became his partner. Rivergate was one of the final projects that the two architects worked on together. Jones passed away prior to its completion.

The contemporary estate, Rivergate, is situated on nine acres in Boonsboro and utilizes the Prairie design of architecture. Here the intent is to make the landscape even more beautiful with the structure’s design. Using cypress, stone and glass, the residence offers panoramic views from every room, terrace and balcony, all the while adding beauty and grace to its surrounding landscape.

The home and surrounding gardens offer both residents and visitors alike an experience that is both moving and spiritual, not unlike walking through a sanctuary. The home is a masterpiece of design, and the surrounding plantings carry on the traditions of natural beauty and simplicity. 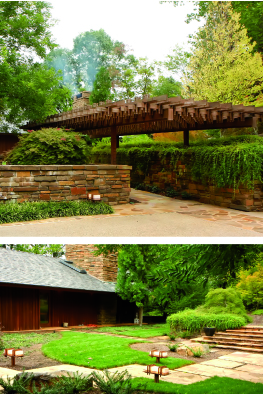 At the entrance to Rivergate, gates forged of metal appear to be literally dripping with icicles. A winding pebble-lined roadway travels over a bridge bordered by fieldstone railings and leads to an open and expansive courtyard.

A covered parking pavilion, which the architect calls a “carport,” cannot be compared to most carports. Its open beams, flaggers, fieldstone walls and slate roof combine to transform an ordinary parking area into an extraordinary expanse that is not only ideal for housing numerous vehicles under cover, but transforms into an outdoor gathering and party spot.

Guests are treated to a walk along flagstone paths through planted and raised gardens. The raised beds use fieldstone for their supports and are filled with winter jasmine that flows to the ground. Surrounding trees, including a specimen Katauratree, dogwood hybrids, and several varieties of Japanese maples all provide spectacular seasonal color.

The most stunning facet of the garden is an exquisite pergola of Far Eastern design. The effect is both spiritual and ethereal. Fashioned with over 4,000 interconnecting pieces of cypress, this pergola was designed to cleanse your spirit while walking underneath.

The home is positioned on the property with consideration of the sun’s path, making it energy efficient. The skylights, angled roofs and huge overhead eaves let in ample daylight while keeping summer’s heat at bay. “It is amazing that a house this size and with so much glass is so environmentally friendly,” says the homeowner.

The walls throughout the home are literally transparent. Glass is everywhere, even angled in the corners! Shutters and louvered doors take the place of all window treatments. The sheer volume of glass helps provide a deep connection to the outdoor surroundings. And these outdoor surroundings are truly sublime; wildlife abounds here. Set in the woods with mostly indigenous plantings and trees, and high up over the river, the estate serves as a sanctuary for local wildlife. Visitors literally feel outside even when inside. Bobcat, bear, red and grey fox as well as a white-tailed deer have all been sighted by the residents of Rivergate.

The marvelous stone, both inside and out, comes from Arkansas. “The walls here are incredible!” says the homeowner. She explained that the stone was brought out of state for matters of economics. According to architect Walter Jennings, who is Maurice Jennings’ son, this is still the case. For this project, stone was less expensive in Arkansas compared to Virginia, even taking into account the costs of hauling it interstate.

Stone, like any natural material, has a personality all of its own. The stone used here is both quarried flagstone used as flaggers outside and for the interior floors, and field stone for the interior and exterior walls and vertical pillars. The stonework emits warmth as well as wonderful reds and earthy tones of orange.

While most of the interior flooring is flagstone, a few areas have wall-to-wall carpeting cut and placed within the stone floors. The exercise room on the lower level has a floating wooden floor—a floor specially engineered using many layers of wood that performs well in areas experiencing temperature changes and humidity. Whatever is not made of stone or glass is cherry wood, including all interior cabinets, shelving and other built-in pieces.

While there is not as much need for additional furniture with all the built-ins, the homeowner carefully chose just the perfect pieces to accent each room. “We are big fans of Thomas Moser!” says the homeowner. Several classic Moser chairs can be found throughout the house. In addition, the homeowners have selected a handful of exquisite antiques that intermingle beautifully with the simplicity of the home’s interior. For example, an early 19th- century blanket chest and an enormous wooden dough bowl from Appalachia keep in total harmony with the décor.

Other standouts throughout the home include the towering fireplaces that rise from floor to ceiling. Each is embellished with a massive stone mantel. “It was a fun process to locate each mantel,” says Walter Jennings. All were hand-chosen for form and size, and add individual character to each and every fireplace. 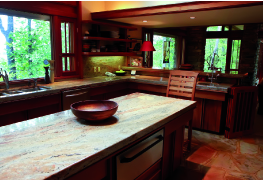 The home’s design is perfect for entertaining. There are two kitchens, including the main kitchen on the first floor. This is truly a cook’s dream with granite counter space galore, open cherry cabinetry, two ovens, a pantry, and an enormous sink with an even larger picture window above. The view is superb! “This is where we spend most of our time,” says the homeowner.

There are several dining spots throughout the home. These include a spectacular banquet-sized dining room, a dining area off the kitchen, an eating spot on the enchanting screened porch, an area in the downstairs recreation room with another galley kitchen nearby, plus numerous terraces and balconies. All offer the perfect backdrop for formal and informal entertaining. The homeowner described one dinner party that the couple hosted where intimate tables were placed throughout the home, including one in front of the fireplace in the master bedroom suite. 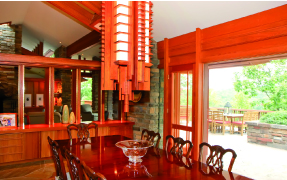 The master bedroom suite is literally made up of an entire wing of the home. A central focal point is one of the four grand fireplaces that help bring warmth into the home. The architect designed an ingenious method for starting a fire in the hearth. Each fireplace has a built-in gas starter. A hand controlled knob turns on a gas jet under split logs. Once lit, the wood catches on fire. Turn off the gas jet and presto! There is a roaring fire without the kindling, newspaper and smoke.

The bedroom suite features many built-in pieces including the bed, side shelves, and lighting above. A large built-in cherry wood chest at the foot of the bed holds an entertainment center. With a press of a button, out pops a full-size television unit. The suite features a private entrance to an outdoor balcony and another gorgeous view. 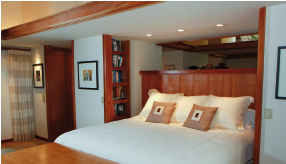 The master wing continues on and on, with numerous dressing areas and wardrobes. The bath’s use of Italian pink marble in the sinks, Jacuzzi tub and shower stall is quite luxurious. A combination sitting area and dressing room has one of the finest views of all. Surrounded by glass on two sides, the room offers a perfect view of the forested landscape. Here the homeowner has viewed face-to-face a bobcat as it ambled through the property. “This is actually my favorite area,” says the homeowner. “If anything ever happens to me and I become incapacitated, I want to live right here. I love this spot!”

There are small but important details throughout the house that make this residence special. For example, Jennings designed elongated and narrow windows installed alongside the massive glass walls. These windows are screened with copper screening, and open like shutters, allowing outside air to flow into the home. The copper emits a golden color and a warm glow, and it is also a stronger alternative to everyday household screening.

Beams and skylights are prevalent in every room. One of the features of the architect’s skylights is his use of mirrors. These mirrors are built around each skylight and help reflect more light into the rooms. Jennings also used mirrors to create the illusion of greater depth and installed them alongside doorways.
Another feature that is typical throughout the home and in many of Jennings’ designs is cove lighting in the ceiling. The reflecting light emits a warm glow into the cavernous rooms. 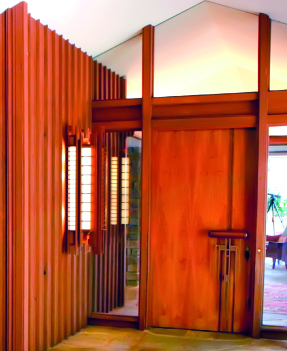 Welcome Home
It is perhaps the front door that truly embodies the spirit of the home. It is visible from the carport and is one reason the homeowners love this spot so much. “I love my front door!” exclaims the homeowner. “Whenever I come home I sigh! I love that door! And I love coming home to this setting!”
According to Walter Jennings, their firm never creates the same door for any of their projects. Walter was involved with the design of Rivergate when he was a student of architecture at the University of Arkansas. He explains that the carport was planned not only to house vehicles but to serve as an entrance—one that makes a statement. It leads visitors through a beautiful space with cathedral-like ceilings and vertical stone columns to this remarkable front door.

“Typically in our designs, geometry is repeated throughout the house,” says Jennings. And throughout the estate one can see a pattern repeated over and over. It begins at the main gate and can be found on the front door, on the shutters, in the custom-made chandelier in the formal dining room and along the metal railings on the terraces. Again and again you’ll see the form of icicles dripping down from a level plane. Jennings describes these artistic motifs as “not a direct copy, but cut from the same bolt of cloth.”

“We feel like we are at a retreat house,” says the homeowner. “I love the woods, and this particular architect builds into the land and not on the land. He incorporates this into his buildings so they look like they have been here forever.” Rivergate is the only home designed by this firm in the area, and only one of two in the state.

The homeowners are so captivated by Maurice Jennings’ work that they have engaged his firm to design their retirement home on Smith Mountain Lake. We can be sure that the property incorporates a bluff and overlooks water. And while the home has not yet been built, we also can be sure it will have clean lines and integrate the woodland setting and beautiful views in every space. And the front door – it will indeed be unique and so Maurice Jennings! 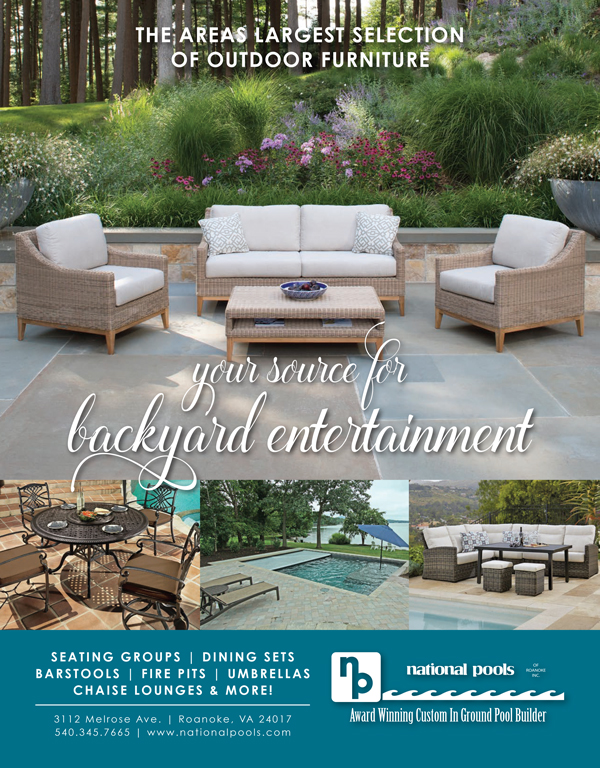