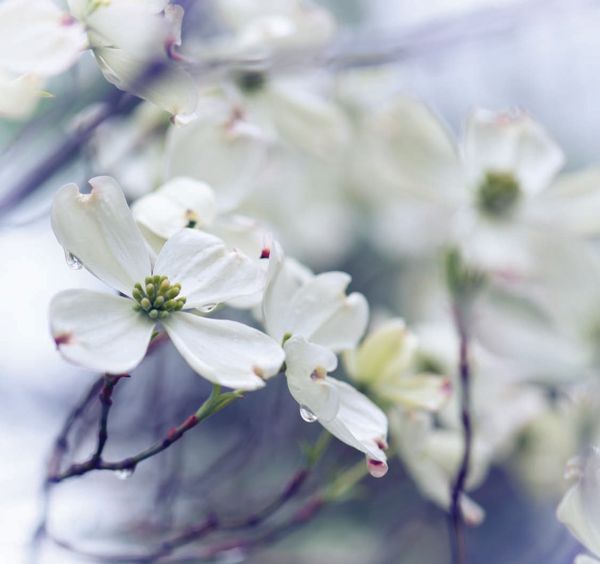 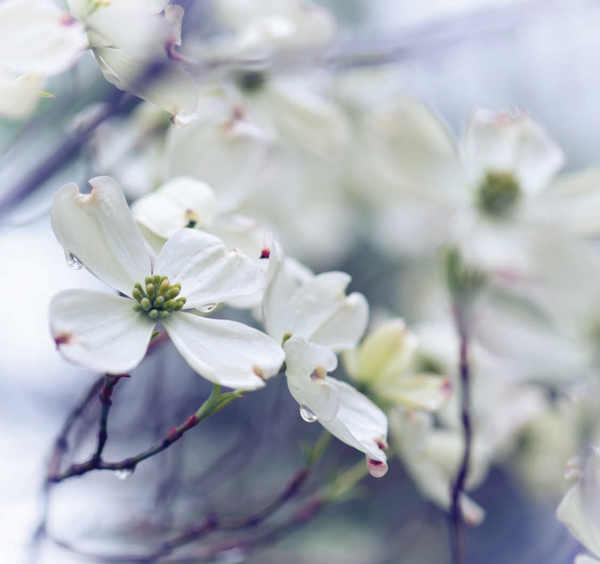 UPDATE
As of press time, the Garden Club of Virginia has cancelled Historic Garden Week 2020 due to the COVID-19 coronavirus pandemic. HOME magazine is dedicated to providing awareness of this worthy annual cause, and appreciates the work that garden club staff, volunteers, members, homeowners and other supporters have poured into this wonderful event.

Each spring visitors are welcomed to more than 250 of Virginia’s most beautiful homes, gardens and historic landmarks during Historic Garden Week, which has been called “America’s Largest Open House.” Hosted by the Hillside Garden Club and the Lynchburg Garden Club, Lynchburg’s tour will take place on Tuesday, April 21 from 10 a.m. to 5 p.m. and includes five properties featuring historic to twentieth-century design. The homes on the tour capture the homeowners’ creative spirits, including those of a skilled portrait artist, a talented floral designer, a dynamic decorative artist, and a well-traveled decorator. Secluded gardens brimming with hues of spring showcase a dedication to native plants, careful planning, and attention to scale and proportion. Tour proceeds support the restoration and preservation of Virginia’s historic gardens, landscapes and state parks. 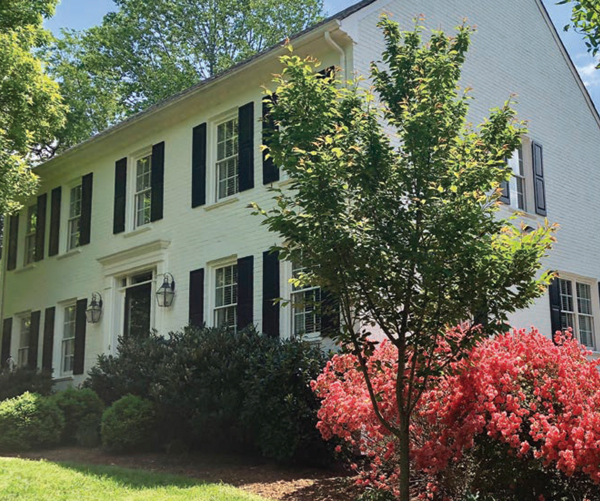 209 Carters Grove Lane
The spacious landscape of this twoacre property, commonly known as “Creekside,” incorporates both formal and casual elements. Adjacent to the home, a fenced English cottage garden confines plantings to symmetrical beds. Peonies, daffodils and Lenten roses, inherited from the homeowner’s grandmother, provide contrasting hues to defined pea gravel paths. Beyond the cottage garden, a lawn bordered by native plants and mature trees reflects the natural flora of the Piedmont. Botanical themes and a love of art and color continue in the interior of this custom brick colonial home. An 18th-century mantel from Rockbridge County, restored by the homeowner, displays Rose Medallion china against a bold turquoise wall in the living room. A museum-quality Sampson Diuguid cabinet houses an extensive collection of majolica in the family room. Notable art, including portraits of Heald family members by William Henry Hilliard and works by Marion Bullard and Dutch realist painter Anton Mauve, blends seamlessly with modern furnishings throughout the home. In the dining room, a c. 1850 Civil War era Repousse silver service graces an 18th century chest. The service was given as payment from a railroad company to Mrs. Bendall’s grandfather.
Mr. and Mrs. Richard A. Bendall, III, owners 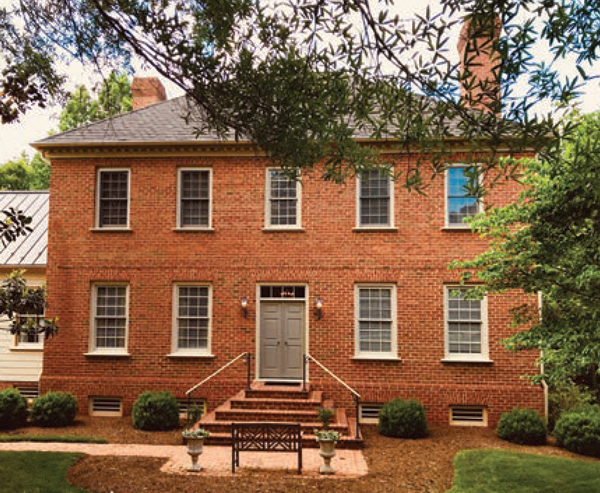 4941 Locksview Road
Based on the George Wythe House in Williamsburg, this home was designed by the homeowner and built in 1995. The two-story brick Georgian honors Colonial architecture while incorporating modern conveniences. An expansive sunroom, the new heart of the home, and a deck overlooking the garden were added in 2013. The homeowners’ artistic eye is evident in collections of porcelain as well as French and English antiques throughout the home. An extensive display of paintings by Mrs. Richards, a skilled portrait, landscape and botanical artist, provides a connection to the garden beyond. The sloping backyard is terraced with mortared fieldstone walls. Sunloving perennials, including peony, lavender and columbine, border the garden and complement recently planted boxwood shrubs. One of the first homes in Lynchburg to suffer the boxwood blight in 2016, the homeowners removed 62 diseased boxwoods and replanted new cultivars to blend seamlessly with the existing landscape. Beyond the terrace, a shade garden planted in honor of a friend leads to an Arts and Craftsstyle cedar garden shed with a standing seam metal roof constructed by Mr. Richards.
Mr. and Mrs. James R. Richards, owners 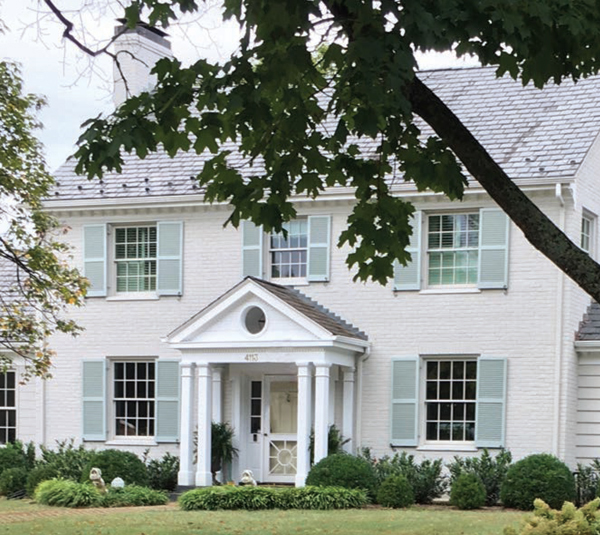 The newly planted landscape features a Williamsburg shed and a fairy garden discreetly tucked behind the west wing of the home. Hydrangea, boxwood and peony provide color and texture in the border.

4113 Peakland Place
Located in the heart of Boonsboro on a charming tree-lined parkway, once home to the Rivermont Trolley, this Colonial Revival home was extensively renovated and expanded in 2018. The house now features a gourmet kitchen, airy family room, vaulted master suite, and a columned rear porch with a working fireplace. The east wing, previously a family room, has been transformed by white-onwhite treillage, or lattice work, into a sunroom complete with double doors opening to a French balcony. A painted floor with a central compass medallion grounds the space. In the dining room, an antique crystal chandelier is balanced by a painted floor overlaid with geometric Moravian stars. The homeowners’ antiques gathered during frequent travel adorn the interior. Of particular note are collections of folk-art figurines and majolica. The design of the addition intentionally creates easy access to the outdoors. Two sets of double French doors in the family room lead to the rear veranda. The newly planted landscape features a Williamsburg shed and a fairy garden discreetly tucked behind the west wing of the home. Hydrangea, boxwood and peony provide color and texture in the border.
Dr. and Mrs. James E. Foster, owners 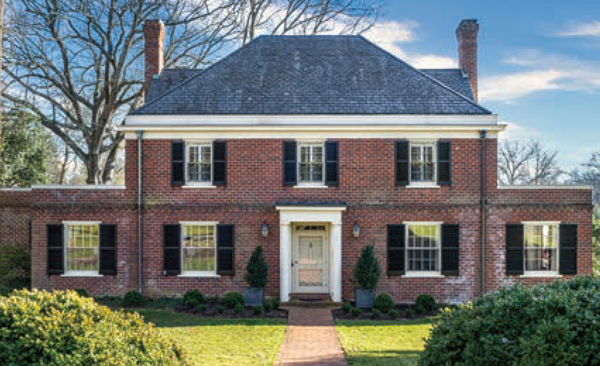 TO LEARN MORE ABOUT THE BURTONS’ HOME, CLICK TO SEE THE FEATURE IN THIS ISSUE.

Meticulously crafted in 1941, this two-story, five-bay brick Colonial boasts classic design elements, generous living areas, and a newly renovated modern kitchen. The home is located in the Rivermont Historic District, listed on the National Register of Historic Places. A northfacing Doric portico welcomes guests into a foyer where generations of family portraiture line the stairwell. In the living room, a 3 x 6-foot detailed replica of the U.S. Capitol anchors the space. The model, built by a Shenandoah Valley craftsman, was painstakingly restored by Mr. Burton’s father and is more than 100 years old. While history abounds in the space, the current owners’ interests influence the furnishings. Visual arts in pastel hues brighten and modernize timeless architectural elements, while taxidermy specimens speak to a love of nature and the hunt. Behind the home, a slate terrace provides a place to lounge and view the garden. Encased by a serpentine brick wall, an arched fountain draws visitors to the southeast corner. The formal hardscaping is softened by generous planting beds of boxwood, hydrangea, spring bulbs and flowering perennials.
Mr. and Mrs. James E. Burton, IV, owners 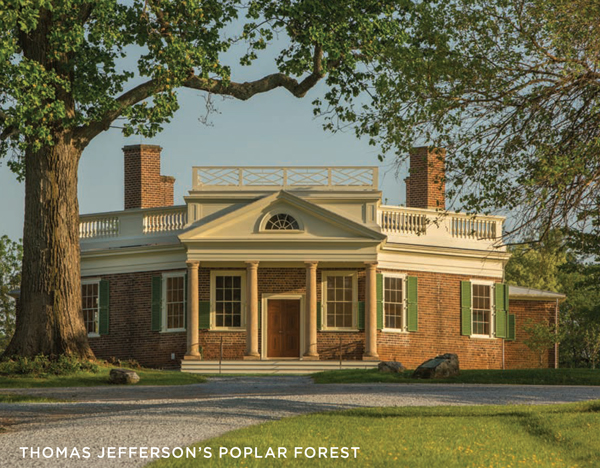 1542 Bateman Bridge Road, Forest
Jefferson’s private retreat and plantation, Poplar Forest provided Jefferson with the perfect setting to pursue his passion for reading, writing and gardening after retiring from public life in 1809. The octagonalshaped home, designed by Jefferson, with ongoing interior restoration by Poplar Forest’s team of expert craftsmen, reflects Jefferson’s idealistic design aesthetic and celebrates classical forms in architecture. The interior is divided into four elongated octagons surrounding the center dining room, a perfect 20-foot cube. Jefferson’s landscape continues his love of geometry and classic design. Poplar Forest archaeologists have carefully excavated and studied evidence related to Jefferson’s ornamental grounds, including his 80-footdiameter carriage turnaround constructed by enslaved laborers, the double row of mulberry trees to the west of the retreat, and the clumps of ornamental trees and oval flower beds located in front. The property, officially adopted by the Garden Club of Virginia in 2011, has undergone significant restoration. The north side of Jefferson’s retreat is beginning to look as it did during Jefferson’s ownership for the first time in nearly 200 years.
Thomas Jefferson’s Poplar Forest 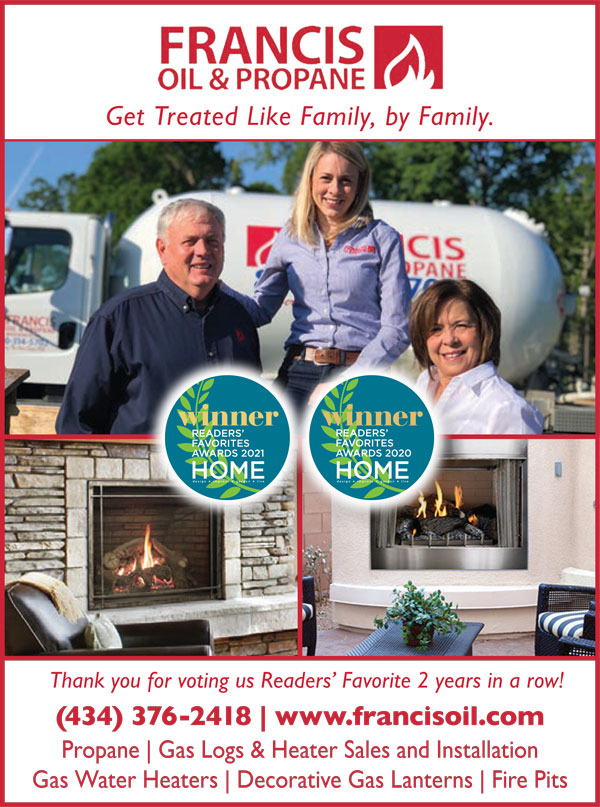