With most plants sitting dormant this time of year, the winter months can be short on freshly cut garden flowers to add a burst of color to your home. Thankfully, in a process known as “forcing,” you can remedy this while also addressing some of your late-winter pruning.

Many spring-blooming trees and shrubs set their flower buds during the previous growing season. After six to eight weeks of cold temperatures (generally below 40 degrees), the blooms are ready to move out of dormancy with just a little push of warmth and moisture. By bringing branches trimmed from these early bloomers indoors, you can force them to bloom earlier than they would on their own outdoors with just a little bit of effort.

Branches that are a half-inch or less in width are best suited to forcing. To start, you’ll need sharp hand pruners. The process is best done on milder days when the temperatures are above freezing. While you’re out there, don’t forget to trim off the old and dead wood; this is a great opportunity to get your pruning done.

Select branches with a large number of flower buds; these are usually the younger branches. Flower buds can be easily confused with leaf buds, but keep in mind flower buds are larger and rounder than leaf buds. You can always gently open the buds to look for the various flower and leaf parts to confirm what’s what. Cut the branches longer than they need to be; you’ll be trimming them again once inside, and should continue to trim them as needed to keep them fresher longer. Cut a few more than you think you’ll need, as not all the branches will necessarily burst forth in flowers. 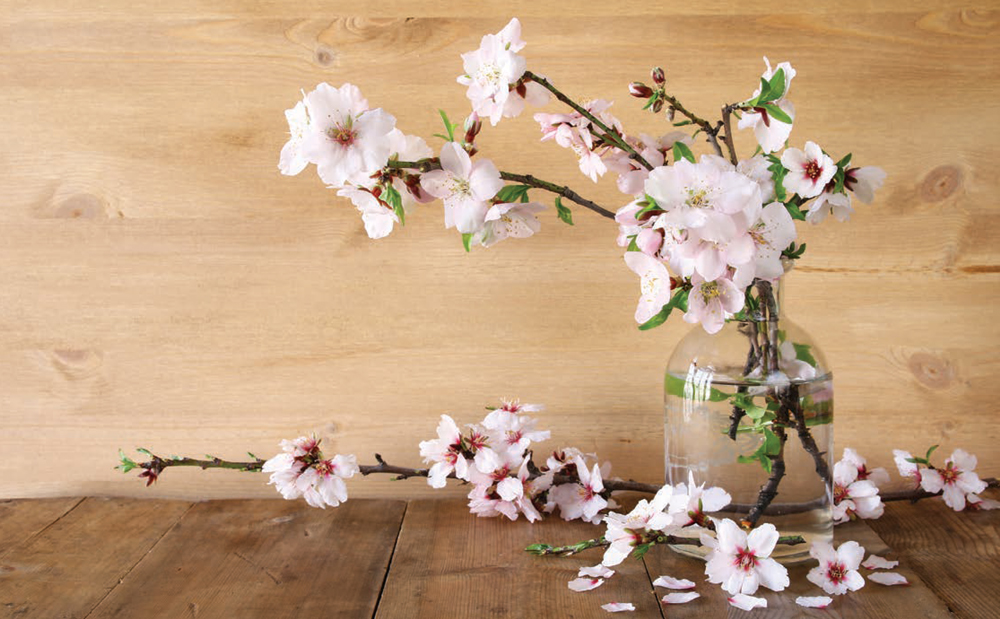 Bring your branches inside and place them in water; somewhere around room temperature is good. It used to be suggested that smashing the ends of the branches helped them absorb more water, but that practice isn’t helpful if they are too damaged. Instead, after ensuring your branches are cut at a 45-degree angle, make a slit about an inch long in the bottom of the stem, which helps them take up the necessary water. Be sure to remove the lateral branches that could touch water, so the main stem can focus on blooming. They’ll want to be out of direct sunlight, with a daily misting and water changed every two to three days to ensure freshness. You can keep the stems in a bucket in a cool room until they start to open up. Then it’s time to bring them in and put them on display, where you can watch the blooming process over the weeks it takes them to open. 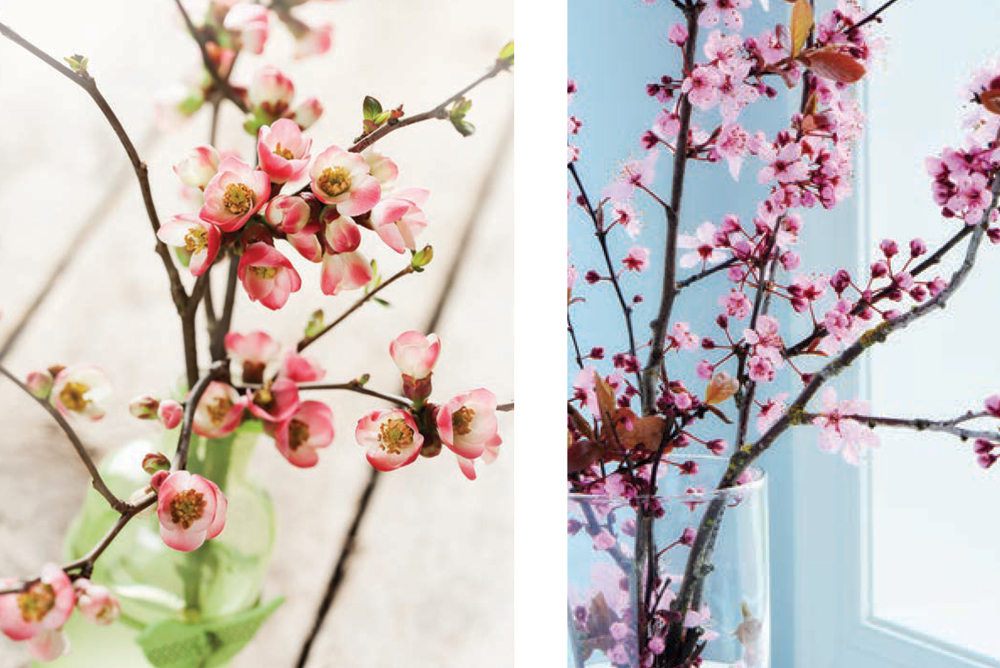 FLOWERING BRANCHES HAVE A SLIGHTLY WILD APPEARANCE TO THEM, SO THEY ARE A CASE OF “LESS IS MORE.” PLAN ON ABOUT THREE TO FIVE STEMS PER VESSEL FOR MAXIMUM PUNCH.

The list of what you can force to bloom is long and changes every few weeks, making the practice one to do with everything growing in your yard. Cut various branches at various times for a succession of blooms and color until warmth is here to stay! Branches to bring indoors into February include forsythia, witch hazel, cherry, Cornelia cherry, Bradford pear, fothergilla, red maple, quince, serviceberry, willow, apple and crabapple, dogwood, magnolia, azalea and rhododendron. As the calendar drifts into March, lilac, oak and mock orange join the list of excellent candidates for forcing inside.

Some plants take longer than others to bloom. Forsythia can generally be forced to bloom in about a week, while dogwoods can take up to five weeks. If the blooms do not appear to be getting larger, you can always cut a few more and try again. The secret is to not let them get above 70 degrees while also keeping them moist.

These little bits of early spring can be used dramatically inside in a variety of vases and arrangements, but keep in mind that the blooms will add a bit of weight to the branches. You’ll want your vases to keep the arrangement anchored. Generally, the rule of thumb for flower arrangements is a ratio of two to one, where the arrangement is twice as tall (and wide) as your base. You don’t have to follow that rule precisely, but make sure the balance is there so that the arrangement is pleasing to the eye. Flowering branches have a slightly wild appearance to them, so they are a case of “less is more.” Plan on about three to five stems per vessel for maximum punch.

With the sweet reward of early spring flowers, the process of forcing blooms to open is an easy one that also gives gardeners an excuse to wander their gardens on those sunny but chilly days. And what gardener doesn’t love both those ideas? ✦ 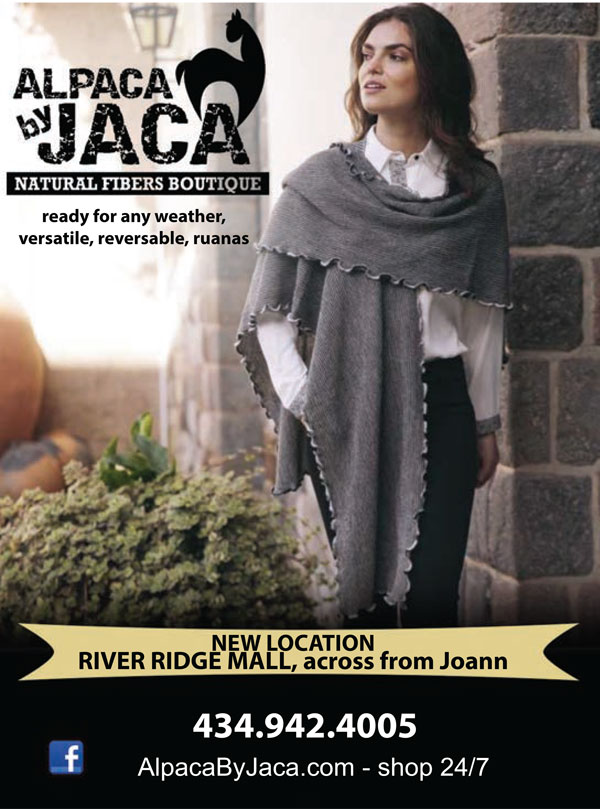