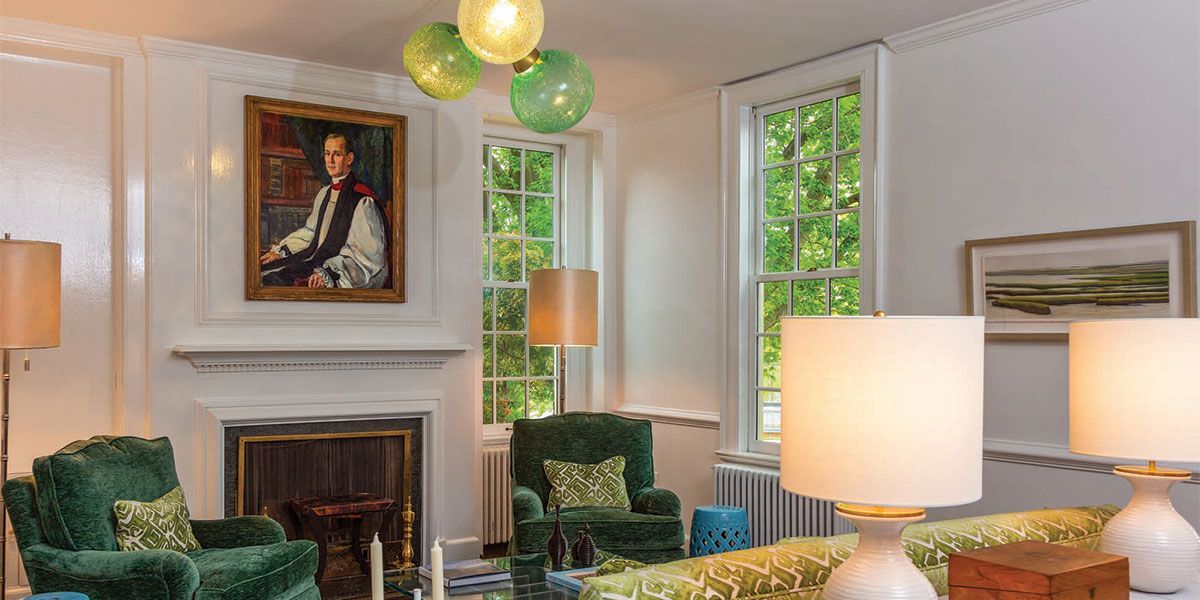 For the Ainslie family, Virginia Episcopal School (VES) is a part of their family. Anne and Garth Ainslie moved back to Lynchburg in 2020 from California for Garth to start his new role as the 13th Head of School at VES. For some families, this might have been a daunting experience, but for Garth, he was simply moving back into the house he grew up in. Garth’s father, Lee Sanford “Sandy” Ainslie, Jr., served as the 8th VES headmaster from 1974-81, so the moving process proved to be a smooth transition. After renovations, the Ainslies moved into the house in time for Thanksgiving 2020.

Garth’s family spent his childhood at VES. He attended VES for 7th through 10th grade, back when VES had a middle school program. Garth remembers all of his middle school classes were in the basement of the classroom building because there just weren’t any other rooms available. This was back when there were not many, if any, options for private middle schools in Lynchburg. Garth’s brother Lee also attended VES and is a member of the class of 1982. Garth’s childhood bedroom was on the third floor. He says he remembers “throwing open a window and hopping onto the roof to escape my brother after getting into some type of mischief.” He feels lucky to be able to return to the house full of so many memories. 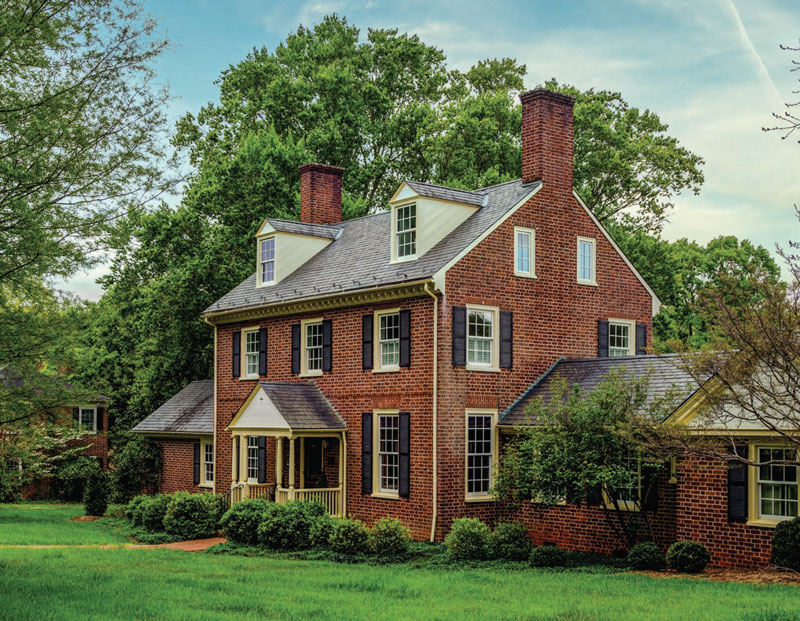 The Head of School’s house was built in 1954 and is officially known as the Robert Carter Jett Memorial Headmaster House. Bishop Jett founded VES in 1906, with hopes of the Episcopal Church of Southern Virginia establishing a way for deserving youths from all walks of life to acquire a superior secondary education. The house sits in the middle of the main campus and is easily accessible by faculty and students alike. This was intentionally done so that the house would be used by all as a home away from home for its boarding and day students.

Before the Ainslies moved into the house, thanks to a VES board member, it underwent renovations to bring it up to modern standards. The footprint of the house stayed the same while the footprint of the back patio was doubled. The main floor of the house and the basement are public rooms, open to all faculty, students and guests, while the second and third floors remain private for the Ainslies’ use. Bedrooms and their own personal offices are found on those floors.

Jamerson-Lewis Construction spearheaded the renovations, led by 2004 VES graduate William Cook. Anne says, “William was so wonderful to work with. He understood the needs of the house, being an alum, and where it could be improved.” The Ainslies brought in their friend, Henry Cochran, to help with interior design. Cochran is a graduate of the School of Architecture at University of Virginia and is a New York- and Palm Beachbased designer. Anne loves how he was able to pull in pieces with history to the house. Cochran says when he first started in the design field, many women wanted “pink and blue houses, but not Anne.” He says, “Anne wanted a proper house, but not stuffy. Traditional with a twist.” Together, these two worked to create a house that is eclectic but shows respect for tradition. “Overall, I didn’t want the house to feel expected or decorator-contrived,” Anne says. The balance has been struck in this fun, cozy and warm house. 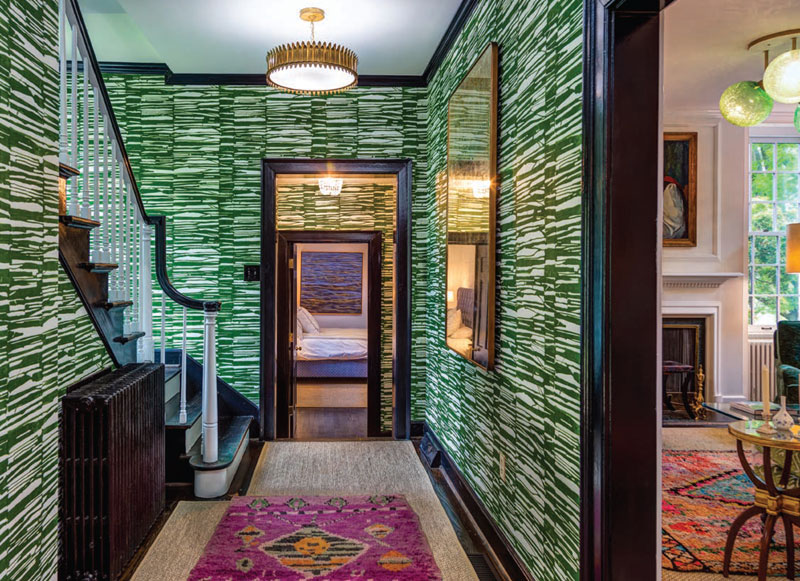 Upon walking in the front door of the brick house with black shutters, guests are immediately signaled that this house is not ordinary. The front hallway walls are covered in green-and-whitestriped wallpaper and all the trim is painted black, including the radiators and handrails going up the steps. A pair of modern flushmount gold light fixtures illuminates what could be a dark hallway. On the floor is one of four Moroccan rugs sourced from 1996 VES graduate Emmy Ellison, who serves on the VES board and is from North Carolina, just like Anne. “These rugs served as the color inspiration and jumping off point for the whole house. We are so thrilled to have them here,” says Anne. 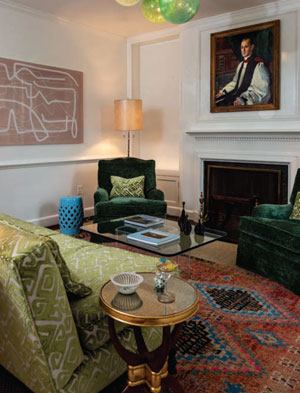 Light flows in through numerous large windows in the back of the house. It floods the living room, which is located off the front hallway—a room intentionally bright white to contrast the black trim in the hallway. Above the fireplace mantel is a portrait of Bishop Jett. Cochran moved it here to hold a position of honor and to serve as a talking point for guests as they sit on the green chenille armless sofa and two club chairs. Another highlight of this room is the multi-color glass ball flush-mount light fixture created by Paul Clements, who has done work at the Virginian Hotel in downtown Lynchburg. Clements made the glass balls, which Anne bought at an art show at Trey and Laurie Ward’s house; Laurie is yet another VES graduate. Anne then had Clements create a light fixture out of them. 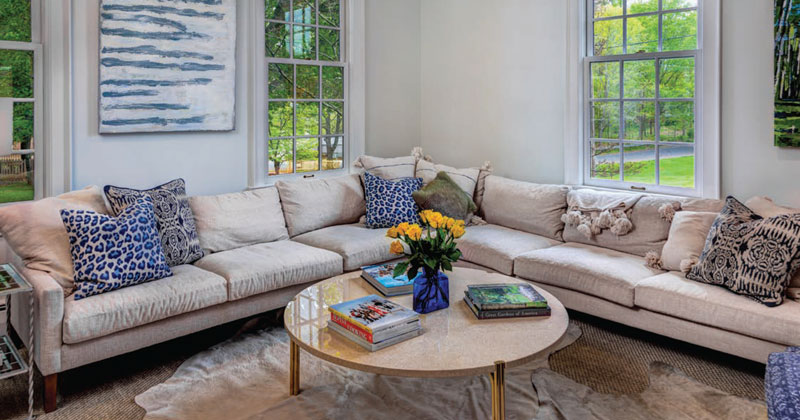 A trail of light leads guests to the back of the house, where a great deal of the renovations took place. The whole back of the house was opened up into one great room that holds a TV area, open kitchen and breakfast table. What used to be a screenedin porch is now the main kitchen. Visitors to the house tend to flock to this room which holds a large off-white sectional sofa purchased from Nowell & Co, owned by Margaret and Al Nowell whose daughter, Mary Allison Nowell Allen, graduated from VES in 2002. Two swivel chairs round out the room and sit on top of a sisal rug with cowhide throw rugs layered on top. A VERY large TV sits off to the side. “The senior girls used this room for senior girls’ night and watched a rom-com piled up on the sofa,” says Anne. The Ainslies strived to create a house that would be a public space for the school and foster a sense of community. Garth says, “We want the house to be used with or without us here.” When the Ainslies’ grown sons, Quinn and Hayne, come home, Anne says they feel right at home in the great room, because it is after all, “a house of boys that love to watch sports while cooking and eating.”

The new kitchen took this desire for a community space to the next level. Large glass windows and French doors let in natural light, while a massive island spans the length of the kitchen and houses a large sink and dishwasher. “People always end up at this island,” Anne says. “It is the true heart of the renovation.” Three white metal light fixtures hang above the island and acrylic bar-height chairs are used as more seating for the room.

There are no upper cabinets or shelves in the kitchen, creating a clean, modern look. Above the stove are handmade navy tiles, a color that is repeated in the door handles that open the pale gray flat-front cabinets. White quartz countertops were chosen for their durability. A breakfast table overlooks the back patio. Anne says their family has really appreciated the kitchen renovation, particularly since Garth is such a “fantastic cook.” She says, “We have had over Garth’s parents, once everyone was vaccinated, for dinner and we plan to host my mother’s 80th birthday dinner here as well.” The faculty and board also use the house to host numerous events during the year. 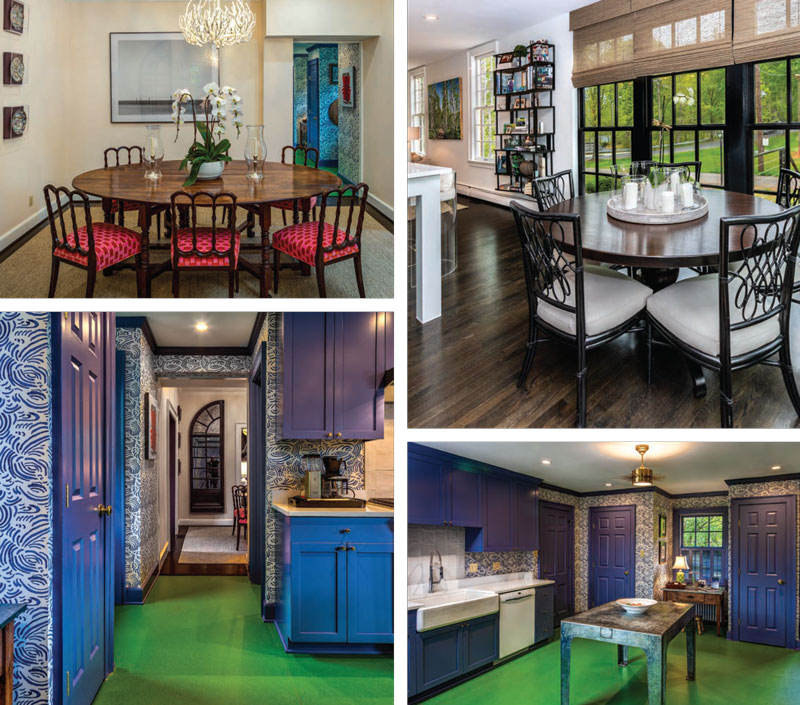 In the renovation, attention was paid to how the kitchen could make entertaining easier for the house. With the guidance of Rie Godsey, owner of locally based catering company Meriwether Godsey, the home’s original kitchen was not torn out. Instead, it was kept to allow catering staff for events to have more room for party prep. This auxiliary kitchen has been painted a French blue, and a new apple green linoleum floor was installed for its ease of cleaning and durability. Funky blue and white wallpaper coordinates with the cabinets, and the same white countertops from the main kitchen flow into this space. The tile backsplash in this room is the same as the main kitchen, but here in white. On the wall is a painting of a red row boat that the Ainslies purchased at the VES Parent’s Council Auction in 2016. Allison Sprock, who donated the piece from her gallery, asked the artist to add a VES emblem to it after the sale, much to the Ainslies’ delight. 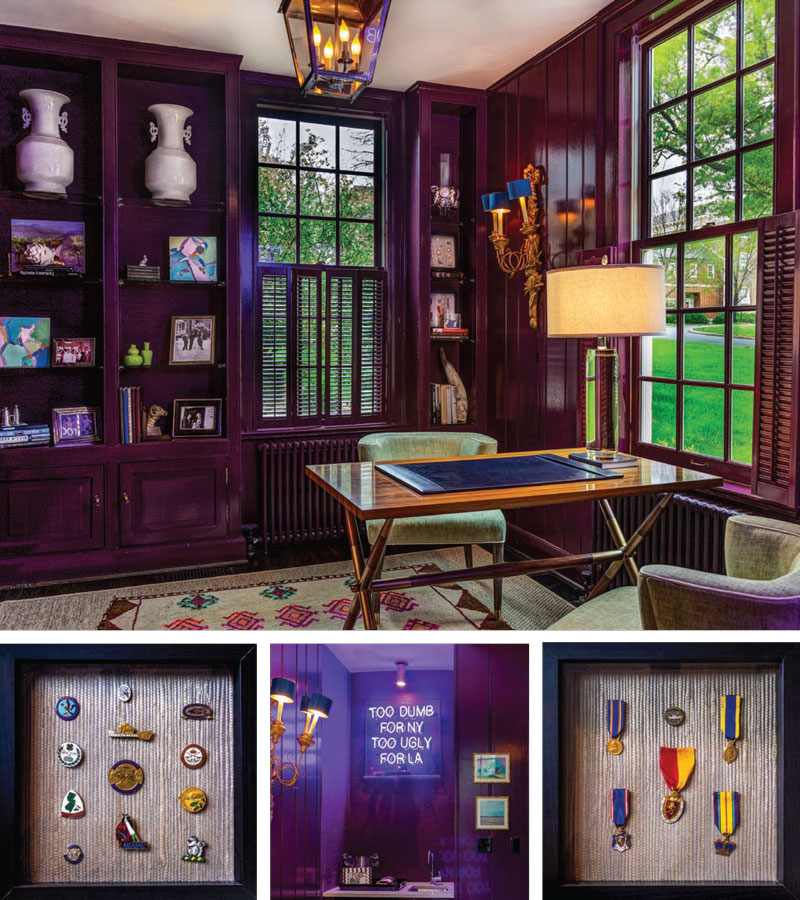 A dining room, guest bedroom (known for years as the Bishop’s bedroom) with its own exterior entry and a library round out the main floor of the house. In the library, Cochran says that Garth requested a dark room. When Cochran approached him with the plum color, Garth was all in. The walls and trim were painted this color as well as the grass cloth that was used behind the shelves in the built-in cabinets. The shelves hold mementoes like Anne’s grandmother, Annie Koonce Ragsdale’s, social pins, and Garth’s grandfather, Garth Quinn’s, curling pins. Above the bar area is a neon sign that Anne had made in Roanoke that says, “Too dumb for NY, too ugly for LA.” This eclectic piece is one of Anne’s favorites because of the smile it brings to people’s faces.

The basement was also updated in the renovation to create a cozy area for students and campus families to hang out and watch TV. The same linoleum floor used in the auxiliary kitchen was used in the basement as well, this time in French blue. Anne set up a coffee nook and candy bar, and she provided a retro Polaroid camera for students to take pictures and place on a bulletin board. Anne borrowed historical VES pennants from the archives to decorate the walls.

This basement area leads directly onto the extended patio, where numerous metal chairs with blue cushions provide seating, and tables for outdoor dining are scattered all around. Don Lee, owner of Lee Landscaping and Sprinklers LLC, landscaped the area and planted all of the container gardens. The black modern pots are anchored with trees, while yellow annuals are added seasonally to pick up the yellow in the garden stools used on the patio. “The patio is a favorite spot of our family, the faculty and students because of the privacy it affords,” Anne says. A tent was raised above it during the height of COVID quarantine so that functions could take place safely outside. The senior class used it after the senior dance for a party. The Ainslies served cheesy westerns and ice cream and relished the good times that were had by all.

After 31 years of marriage, the Ainslies have learned a thing or two (or 12) about how to entertain. Their house at VES is not only their private home, but also the home for the VES community. After the renovation, the house is truly living up to its potential to provide this home away from home for so many. Garth’s dad and hopefully Bishop Jett would approve of what the “Lucky 13th” Head of School has done with this much-loved abode. ✦ 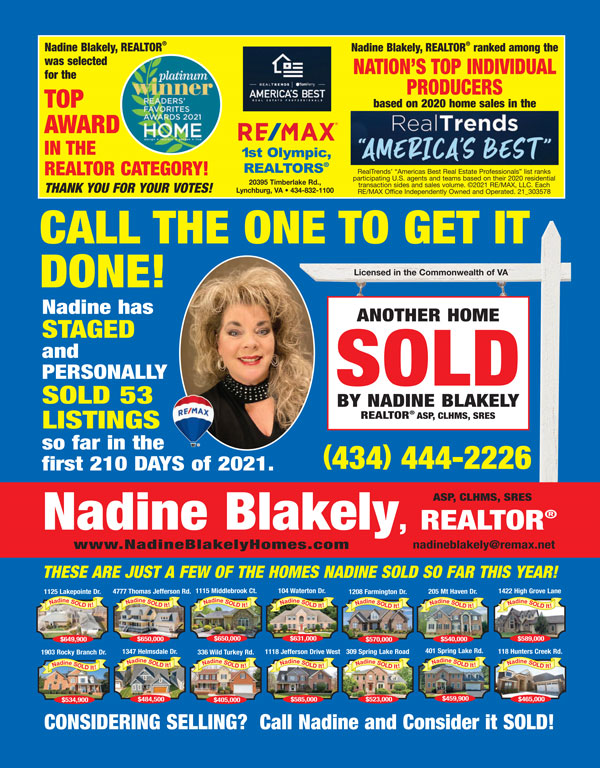