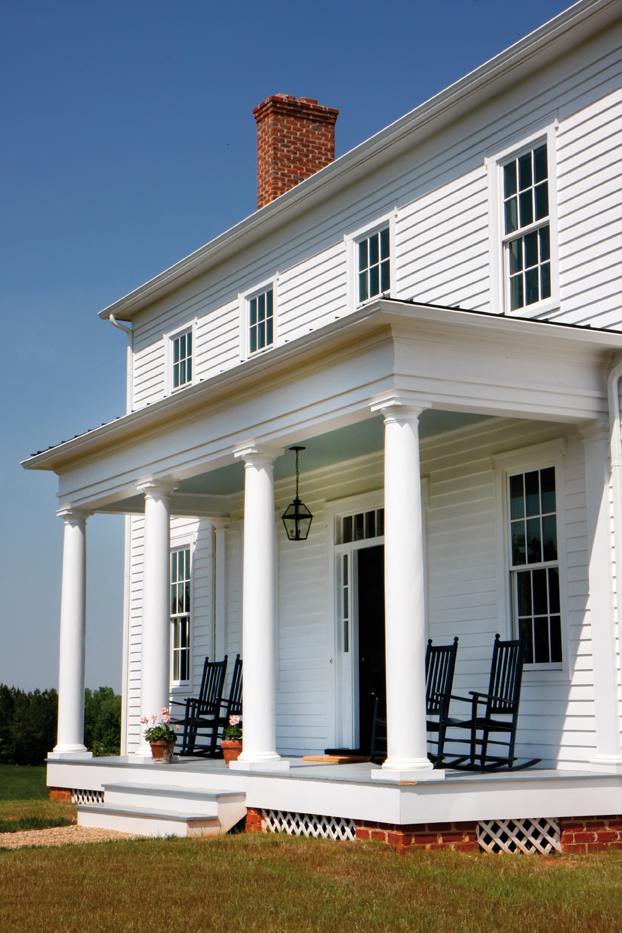 “Is it new or is it old?” This is the first thing you’ll wonder as you walk through the door of Kristin and Frank Wright’s Campbell County home. And this is exactly the question that the Wrights want to hear.

Approaching the home, a dirt road followed by a long lane finally leads to a clearing. Here a simple farmhouse stands alone. “We have always loved old houses,” says Kristin. “We considered renovating but didn’t think we were the sort of people who would want to live with dust and plaster for all of those years, so we decided to build a new one in the style that we wanted.”

The Wrights chose a 200+-acre piece of land in Brookneal that was once owned by Westvaco timber land. “This piece of land attracted me because of its isolation and access to the Falling River,” explains Frank. “The mountain views were an unexpected bonus.”

“I am not sure that I always dreamed of living far out in the country,” says Kristin. She grew up in a Detroit suburb “where to own half of an acre was a luxury, and nobody needed a riding lawnmower.” But Kristin likes country life, and Frank loves it. Although he grew up in Campbell County, Frank always thought that he wanted to live in a big city. “But after six months of college in the Boston area, I realized that I wanted to live in the country,” he says. Here was the perfect place to bring up a family! 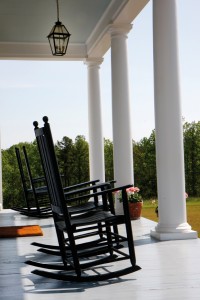 In their househunting, the couple closely examined every old house that they could find. History has always been a favorite subject for both Kristin and Frank. Kristin enjoyed history from the time she was a child, and majored in it in college. Frank’s mother instilled in him an interest in history. Her family arrived in Virginia in the 17th century and settled in Campbell County in the 1700s. So both Kristin and Frank came into the project with a keen interest in traditional design and a desire for historical accuracy.

The couple’s dream was an “old” but “new” 19th-century farmhouse typical of the area. “We wanted a Campbell County-style farmhouse,” says Kristin. The couple shied away from designs that were architecturally inconsistent to the area. So they carefully studied the local architecture of the older farmhouses along nearby Red House Road. Here were several examples that the Wrights could emulate.

When they visited Lynchburg’s historic site, Sandusky, they recognized that this design was close to what they envisioned for their home. They studied the floor plan, taking measurements of every room and using it as the jumping-off point for the blueprint of their home. 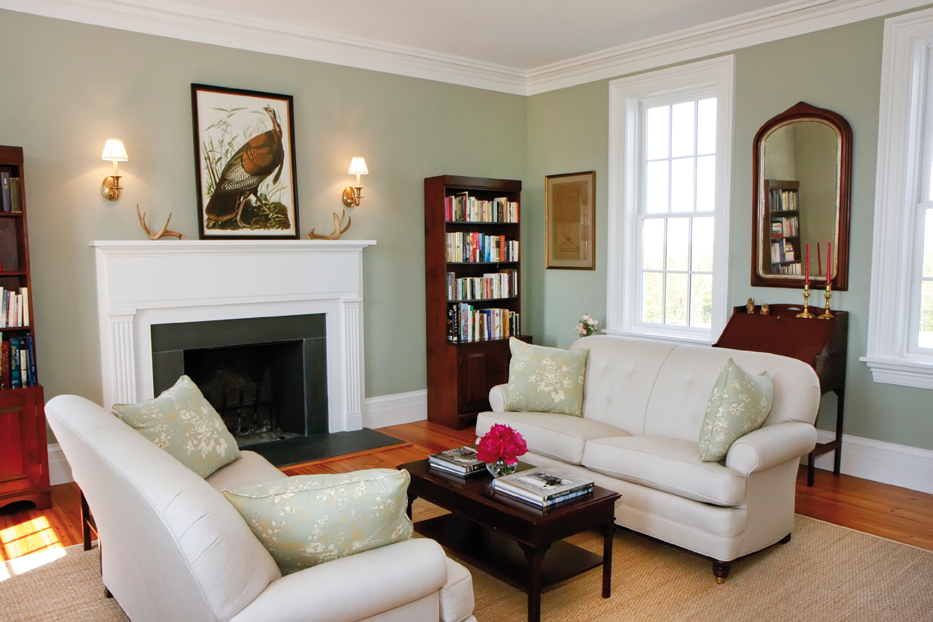 The Wrights took their ideas to contractor Scott Elliott and architect Ron Driskill at Custom Structures in Forest. Together they came up with a home design representing an 1830 Greek Revival style with a Federal influence. The home would fit perfectly on the rural piece of property that the Wrights had chosen for the building site.

Custom Structures was a perfect fit for this project. They understood exactly what Frank and Kristin were trying to achieve and also knew the steps that would be necessary to reach their goal.

According to Ron Driskill, their objective was to build a home that appeared as if it had graced the site for the past 150 years. “We knew that we had achieved this goal when a vendor visiting the building site asked us if we were doing the renovation,” says Driskill.

To reach this objective, Custom Structures used materials and methods characteristic of the mid-19th century. Reclaimed flooring, a hand-crimped roof, thick walls and deep casings, high ceilings, and moldings typical of the era all add up to a charming mid-19th century rural farmhouse. These older houses are usually connected to a septic system which requires septic tank cleaning every three to five years.

The simple home has white clapboard siding fashioned from cypress and a tin low-pitched roof which was crafted with the help of a professional roofing contractor. Instead of using the newer roofing materials featuring metal with baked-on finishes and mechanical crimping, tin sheets were crimped by hand then painted green. Typical of the Greek Revival period, transoms surround the front door. And a columned front porch with four rocking chairs beckons visitors to come and sit for a while. 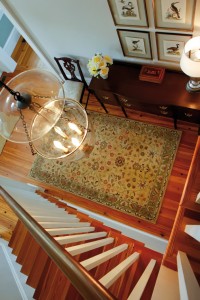 A wide center hall leads visitors to the interior of this charming home. The first floor ceilings are high—10 feet high, to be exact! They provide a touch of elegance to this unassuming farmhouse. The fireplaces and molding throughout the home also help set it apart and make this new home seem old.

Grayson Ferguson Woodworking was responsible for the woodworking. Based in Lynchburg, the company custom-makes everything imaginable in wood for a home. While most of their work is in restorations, the Wrights’ home gave them an opportunity to demonstrate their talents in new construction. Using the designs set by Asher Benjamin, woodworkers were able to replicate the moldings of the era. A master of building and carpentry, Benjamin lived between 1773 and 1845. He wrote The American Builder’s Companion and also developed pattern books which modern-day woodworkers used to determine the proportions for the moldings in the Wrights’ home.

At the outset of the project, the Wrights contacted designer Heather Kinder of “SPACES by a little french.” “They came to us at the conception of the project,” says Kinder. “And we were able to take them through to the final product.” By being involved from the very start, Kinder was able to consider their plans for specific pieces of furniture and the space needed in each room.

“The Wrights did their homework,” explains Kinder. “Their home truly reflects their personality.”  Most of their pieces are typical of the first half of the 19th century. “We tend to be drawn to the Sheraton, Chippendale and Hepplewhite styles,” says Kristin. “The house style we picked fortunately goes with the simpler style of furniture that we also like.” Kristin points out, however, that they never wanted their home to feel like a museum. They have also included modern furnishings, including some basic and comfortable upholstered furniture. The Wrights found their pieces through many sources. While some of the furniture came from Kinder’s SPACES, the couple has uncovered some great finds at local antique shops and estate sales, as well as on eBay and Craigslist. 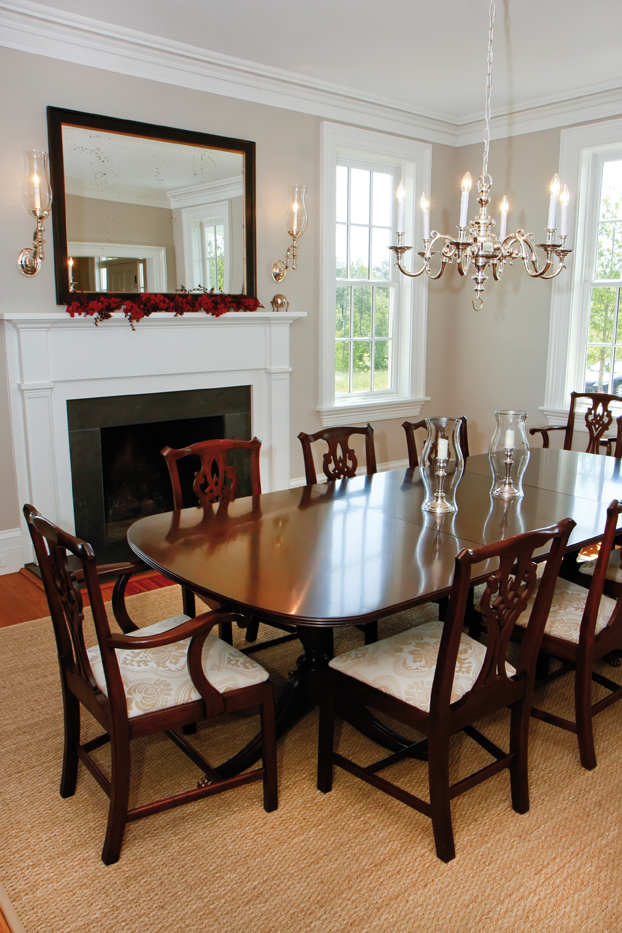 A dining room includes a fireplace and is large enough to hold a table for eight. Across the hall, the living room houses a matching fireplace and offers the creature comforts that only upholstered furnishings can provide. Kinder found lovely sea grass rugs for both rooms. These rugs are popular for their texture, look and durability, and provide a warm tone, all the while withstanding the traffic of a busy household.

The home, free from window treatments, affords incredible views of rolling hills and far-off mountains. The Wrights had no idea when they bought this land of the beautiful view that lay hidden among the trees, but when they cleared off a high spot for the home site…behold, there it was!

Framed prints featuring both wildlife and historical maps hang throughout the house. According to Kristin, the Wrights have found most of their hanging art at James River Framing & Art in downtown Lynchburg. This local gallery’s prints certainly add charm to their home.

The floors are a beautiful heartwood pine. They were reclaimed from a cotton mill in Georgia and purchased through Antique Building Products in Amherst. A tung oil finish gives them that weathered glow that only rescued old flooring can provide. 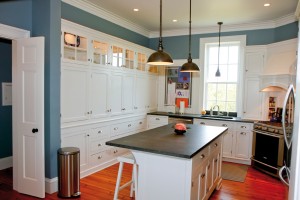 The inviting kitchen is free from cluttering gadgets, keeping with the style of a traditional kitchen of yesteryear—yet has everything a modern family would ever want or need. The countertops, fabricated, designed and installed by Spectrum Stone Designs, are made from soapstone that is quarried locally at Alberene Soapstone Company. Typically used for lab counters, soapstone is a popular choice because it does not have to be sealed. One entire kitchen wall is lined from top to bottom with white cabinets and drawers.

According to Kristin, “We spent a long time looking through magazines and old house pictures. And we looked at a lot of old houses as well.” Frank adds that there is a “trend toward new-old houses.” The idea is to try to build something that is consistent with the area and tells a story about the progression of the house as it ages. The front portion of the Wrights’ home appears to have been built first, and the back area with the kitchen, den, downstairs bath and upstairs master suite and bath added later. The home appears to have evolved over time. 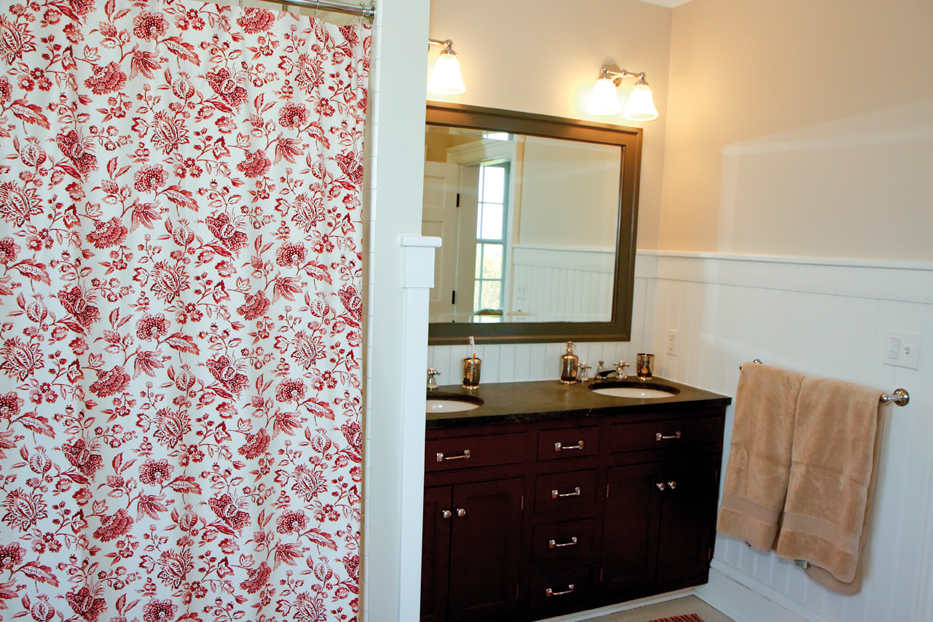 Bathrooms would not have been included in the original home. They would have been added later. In the Wrights’ home, the master bedroom bath follows the design of a 1910 bathroom with a hex tile floor, and subway tile on the walls of the tub and shower area. Subway tile, which is thicker than most tile and has thinner grout lines, gives the bath a very distinctive, period look  and adds to the total charm of the bath. Barn-red cabinets and soapstone counters provide a strong contrast to the white wainscoting beadboard walls. On the tiled floor is a Dash & Albert woven rug. Known for its durable, colorful and affordable products, Dash & Albert rugs grace several rooms in the Wrights’ home.

The children’s bedrooms boast large fireplaces. Each room reflects their interests. One room features everything seaworthy. And the room on the opposite side of the hall is decked out with railroad memorabilia, including a train on its tracks and a miniature version of the family’s farmhouse. 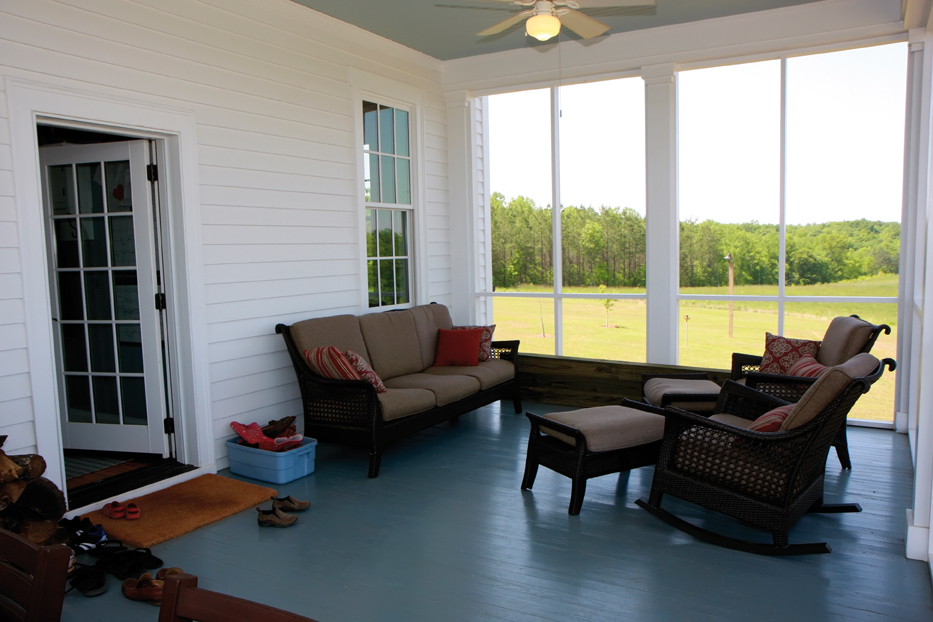 The back porch is everything one would dream about for a screened-in porch. Ample in size, it looks out into a field and far off into a forest. The white clapboard walls stand out against the “haint blue” ceiling. Historically, the paint choice for porches has often been a shade of blue that ranges from turquoise to sky blue. Theories for using this blue include warding off evil spirits, extending daylight at dusk, and helping keep bugs at bay.

Eventually the Wrights will build a shed behind the house. After all, what farmhouse does not have a shed? Even this will appear as though it has been on the property forever. Plans include a dry-laid rock foundation and rough-cut lumber for the sides, topped with a painted green hand-crimped tin roof. It will look like any other old shed on an aged farm. Other farm improvements include a vegetable garden that their two young sons will tend, and lots of fencing for a herd of beef cattle.

Frank says that as a child he always loved being in places, like the Surrender Grounds at Appomattox, where nothing modern was in sight. “If you stand in our yard, you really can’t see anything that appears to be modern except for the cars and tractor, so in essence, it’s a realization of a childhood dream,” he says. Unassuming yet elegant, the home and interior design all come together. Here, form and function work to create a perfect home for this family. 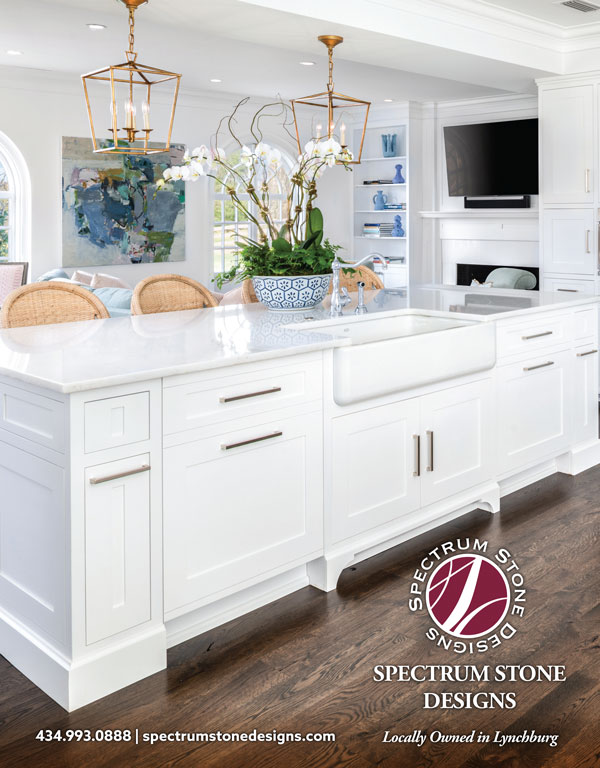