When A House Tells A Story 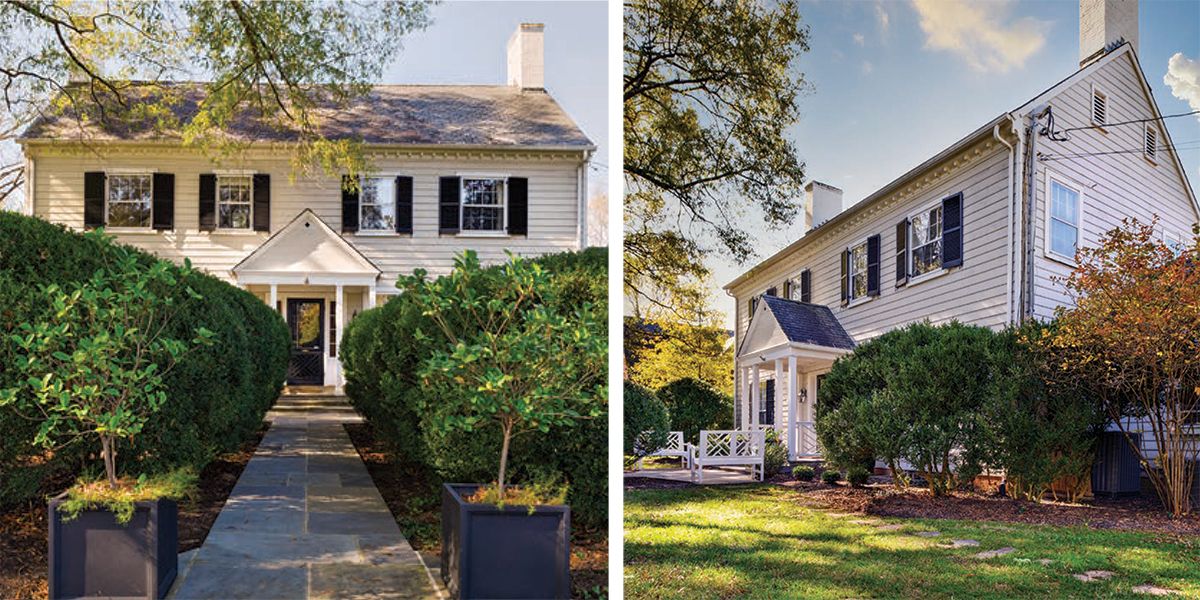 Tucked behind large boxwoods sits the Colonial-style home of Heather and Lewis “LH” Mundin. The Mundins moved into the house in 2000, but their appreciation for it goes back much longer—to 1992 to be exact. Heather’s parents, Louise and Buck Bradley, live next door, and hosted Heather and LH’s wedding at their house. During the reception, LH looked up from the festivities and was struck by the house next door, wondering “what if.” Eight years later when moving back to Lynchburg from Richmond, as luck would have it, this house was on the market, and it only felt right to take a look. Serendipity in full force, the couple bought the house. “The house met all of our needs,” Heather says. “We love old homes with character that sit out from the other houses in the neighborhood. Having family next door adds a fun twist on memories to share with the next generation.” 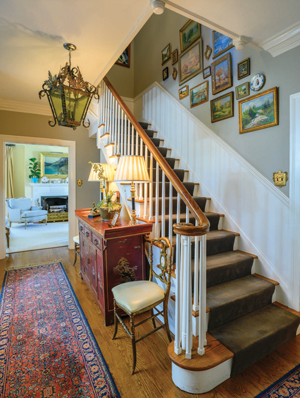 Designed by Everette Fauber, this stately home was built in 1940 by John P. Pettyjohn Construction Company for Mr. and Mrs. Clunet Pettyjohn, who also happen to be longtime family friends. A semicircle driveway directs guests to enter the house through a boxwood-lined front walkway of bluestone. Inside, the foyer features a red chinoiserie chest with two French chairs on either side, with artwork lining the walls of the foyer and up the stairway. The Mundins have a particular affection toward landscapes. “We like colorful artwork of landscapes in old frames, and we’ve enjoyed collecting them over the years,” Heather says.

Off the foyer, a cozy pine-paneled library with a wood-burning fireplace is where the family likes to read and watch sports. The Mundins’ fondness for historical memorabilia is felt most prominently in this room, with built-in bookshelves full of such artifacts. Both Heather and LH’s fathers share a love of military history and have given the couple historical pieces throughout their life as gifts, before and during their marriage. These gifts have led to another generation of history buffs and collectors. The fireplace showcases more of these collectables, with taxidermy birds, an antique pistol, and brass military trumpets adorning the mantel. An oil landscape in a thick gold frame hangs above the fireplace. A comfortable loveseat and two pale green leather club chairs invite guests to sit and stay a while.

Heather says she has heard many sweet and often funny stories from her grandparents about the fun they used to have in the library having cocktails with the Pettyjohns, just after the house was built. “I heard these stories as a child, and now I find myself thinking of them every time I sit and enjoy a drink in the room with my own family,” she says.

The living room, just off the foyer, features another treasured landscape, this one by Oliver D. Grover called “Emerald Lake,” which hung in the Chicago Art Museum in the 1930s. Here as well as in the dining room, interior designer Leigh Giles helped Heather with the decor, highlighting collections and antiques while bringing in modern touches. A collection of Dresden plates and figurines sits atop the mantel and is also found on the walls, flanking some of the artwork. On either side of the mantel sits a pair of gray French chairs, and in front is a settee from Heather’s grandparents, recovered in a modern gray velvet. Above the settee is a painting by Frank Swift Chase, a student of Monet and great uncle of actor Chevy Chase, which was given to the Mundins as a wedding gift. “This piece of art is where it all started for us,” Heather says. “We wanted to add art to our house that complemented this piece.” A glass coffee table with gold accents houses a collection of antique wooden boxes, while groupings of Limoges boxes and Herend figurines are also found throughout the space. “I grew up surrounded by these collections at my parent’s house, and now we enjoy adding new pieces to our own collection,” she says. Additionally, an antique cabinet fashioned out of tortoiseshell and inlayed brass sits atop a tone-on-tone beige Greek key rug.

Adjacent to the living room, the dining room features a large custom-made pedestal table with six claw-foot chairs. A crystal chandelier illuminates the room, while an antique sideboard holds a silver service that was a gift from Heather’s parents. The gold mirror above it is flanked by a pair of Imari plates. And the sterling punch bowl in the center of the dining room table has a history of its own. Heather’s grandmother and seven siblings would all use the punch bowl for special occasions and holidays. Because there were eight of them, they called each other the “Eight Apostles,” so Heather refers to this bowl as the “Eight Apostles Bowl.” On the floor, a cheetah rug adds a dose of modernity and texture to the room.

The Mundins renovated the kitchen in 2003 and completed a two-story addition that included the family room, mudroom, sunroom, master bedroom and basement at this time as well. “The house was a typical 1940s two-story house without a lot of room for a large family to spread out, so we wanted to modernize it to today’s living,” Heather says. Now, a large table created from an old cypress train water tower anchors the breakfast room, with two white pagoda fixtures above it. A picture of Ivy Hill Farm, where Heather’s mother was raised, hangs above the wet bar. Vintage Oriental rugs adorn the kitchen and breakfast room floors. The galley-style kitchen features white cabinets, brass cabinet pulls and black countertops. A large stainless-steel gas stove and hood are the showstoppers of the room. Above the sink, what used to be a window was turned into a pass-through into the sunroom. A brightly colored oil painting depicting a water scene with fall foliage brightens up the space with strong orange and blue hues. 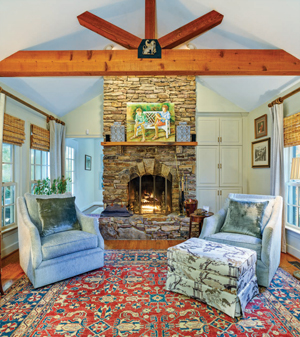 Flowing off of the breakfast room, the family room packs a punch with a stacked-stone fireplace. Charlottesville artist Steve Endres painted the portrait of the Mundins’ two boys, Lewis Howard “H” and Robert, featured here. “This painting is our absolute favorite in our house,” says Heather. Club chairs and a sofa, in modern tone-on-tone neutrals, provide comfortable places to relax. The vaulted ceiling is highlighted by cedar beams accented with griffin plaques, while opposite the fireplace reside three family crests: the Bradley crest, the Mundin crest, and a combination of the two families.

In the sunroom, tan leather club chairs and a sofa overlook the back yard. An Oriental rug adds dimension to the room and a collection of helmets sits on top of a geometric-patterned skirted ottoman. The helmets have their own stories as well. The leopard-skin helmet dates from 1845 and was worn by a French elite cavalry guard. The gold helmet with a lion on top dates from 1880 and would have been worn by a Saxon Cuirassier cavalry officer for a parade, and the gold helmet with an eagle on top dates from 1870 and was worn by a Prussian cavalry officer. Like all rooms in the house, the sunroom gracefully blends antiques with modern touches.

The sunroom leads out to what the Mundins deem their favorite of all the updated spaces: the covered porch, completed by Colin Anderson Construction with stonework by Land Tech reusing original fieldstone from the previous backyard walkway. The Mundins’ sons enjoy having guests over just as much as their parents and have loved this space for hanging out. “The porch has added so much to our home in so many ways—a place for entertaining, relaxing and just spending time together,” Heather says.

In addition to a dining table, two wicker sofas with plush white cushions flank a firepit that makes watching TV outside enjoyable in mild weather. The TV is hidden in a custom cabinet, rising up from its encasement for viewing. A treasured metal statue of Athena, goddess of war, stands guard of the TV, fitting for football games in which teams are waging battles. Concrete urns full of seasonal blooms dot the uncovered patio as well. 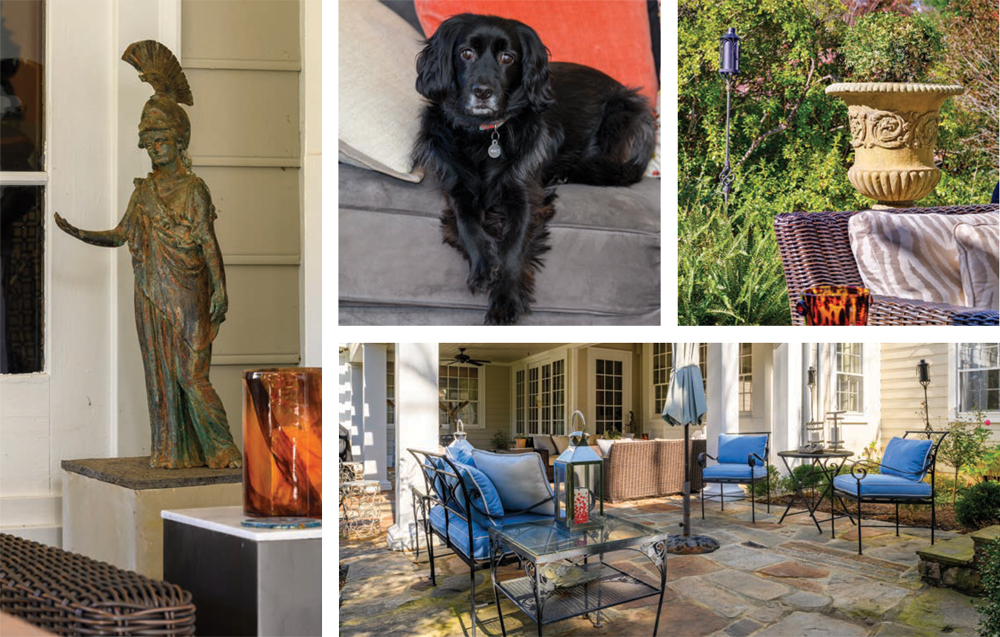 Famed landscape architect Charles Gillette designed the original garden. When the covered patio was built, some of his gardens were lost, but a few remnants of his design remain. Heather looked no farther than next door for help with the current garden. Her mother has helped install vitex bushes, hydrangea, Lily of the valley, and paper bush. Dependent upon the time of year, honeysuckle, daphne, rosemary, lavender, roses, peony, and camelias are also found. The Mundins hosted both of Heather’s sisters’ wedding receptions in this back yard, similar to their own wedding next door. Heather says, “It is so special that all of us share this common history of wedding festivities between the two yards.” A pebble pathway leads visitors back to the front of the home.

With multiple generations of collectors at work, the family’s many treasured collections are combined in such a way that the house still feels modern. By incorporating modern lighting, fabrics and even art, the house is a beautiful mix of old and new. With a backstory straight out of a novel, it’s no wonder that the Mundins have been happily living in this house for 20 years. ✦ 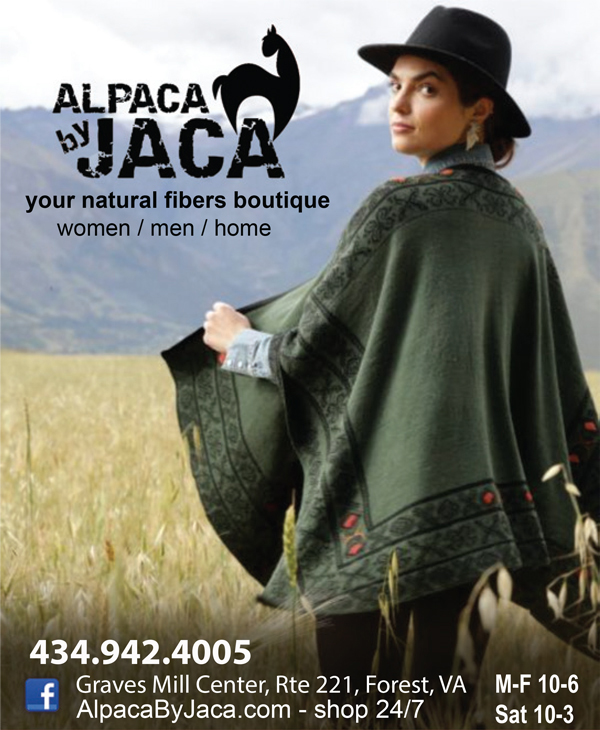