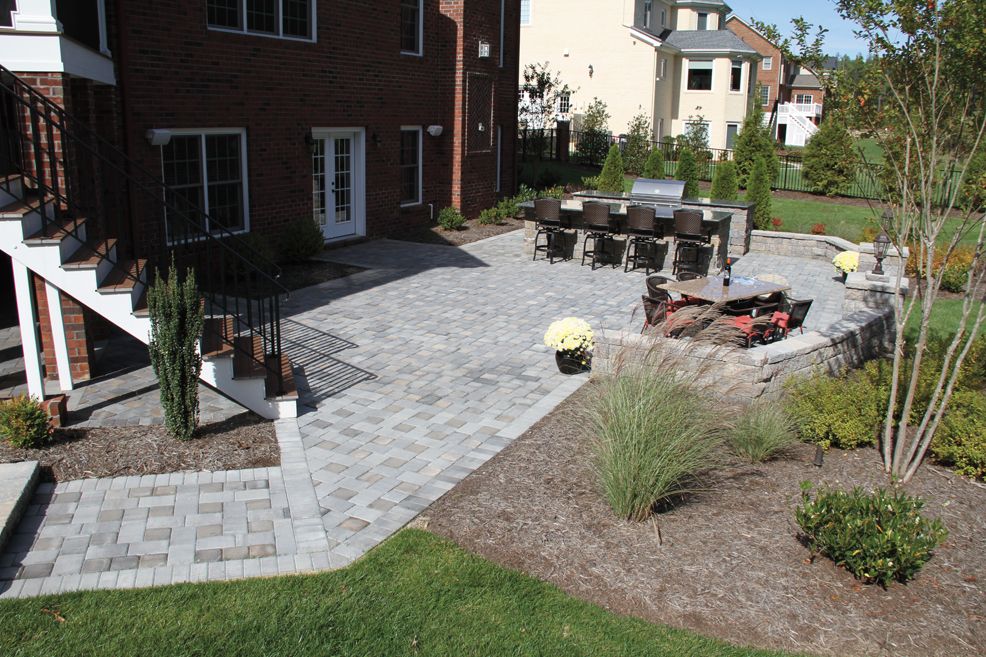 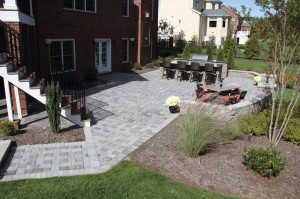 The path to your front door doesn’t have to be mundane. Not any more. From Central Virginia’s suburbs to downtown, narrow ribbons of gray or white concrete are giving way to multi-colored, intricately designed paths of interesting materials that welcome approaching visitors to a home. Increasingly, the emphasis has gone from merely carrying foot traffic to creating curb appeal.

According to Brent Gleason of Boxley, Inc., one of the local pioneers in what has come to be called “hardscaping,” area builders and homeowners are waking up to the possibilities inherent in decorating not only walkways, but driveways and patios. In some cases, those three elements share the same design and actually flow together.

The trend began in Europe, Gleason says, and it’s taking hold here in the U.S. too. The trend is driven both by word of mouth as well as the vast amount of information and media images available to inspired homeowners looking to add flair to their outdoor spaces. 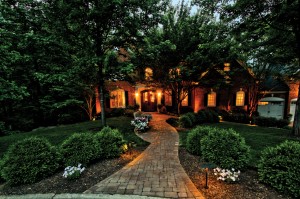 “People see it done with somebody else’s home,” Gleason says, “and they get interested themselves. It might not have occurred to them before.”

Like home decorating customers armed with paint samples and fabric swatches, these newly sophisticated sidewalk shoppers now greet their local landscaper with their own ideas of color and style.

“It can be a conference sort of thing now,” says Chris Templeton of CLC, Inc. “Not just, ‘I need a sidewalk put in.’”

And, says Mark Maslow of Southern Landscape Group, the possibilities now go far beyond concrete gray. “There’s not much we can’t do anymore with hardscaping,” Maslow says. “We can do monograms in a sidewalk. Awhile back, we put down a Virginia Tech logo on a driveway.”

The colors in stamped concrete and concrete pavers come from dry pigments spread across the concrete and incorporated into it while it is still setting. Thus, the various hues are virtually fade resistant.

A sidewalk could feature large individual flagstones set against a backdrop of aggregate gravel. Or inlaid brick. Or slate. Or paving stones presented in a chevron or herringbone pattern. Or, perhaps, a parquet look. Such patterns, Gleason says, “soften up the landscape.” 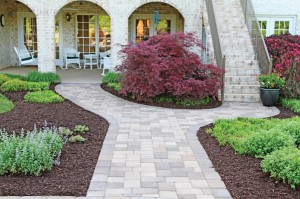 Some homeowners like the look of a walkway that curves as it approaches the house, an effect that can be difficult to achieve with a single uninterrupted sheet of concrete. Others prefer a wider surface than the standard 3 1/2 feet, allowing two people to walk up the sidewalk side-by-side. “We get that a lot,” Templeton says.

Stamped concrete, offering unique designs embossed into the surface, has come a long way in the past decade, and it is now possible to use concrete pavers that almost perfectly mimic brick or slate, but are less expensive.

Installing such a walkway is not beyond the realm of possibility for do-it-yourselfers, but Templeton advises caution. “It’s really better to have it done by someone with some technical expertise, because there’s a lot more to it than people realize,” he says. Unlike laying down a kitchen or bathroom floor, anyone putting in a sidewalk must deal with tricky issues involving the amount of “fill” beneath the walkway and changes in gradation. An inside floor is close to perfectly level—a sidewalk, not so much.

If the fill doesn’t adjust to how the ground is configured, says Templeton, “you may wind up putting stress on a section of the walkway and causing it to buckle. Right now, we’re tearing up a 4,000-foot driveway that was installed improperly.”

Or, as Maslow points out, “You’ve got to establish a barrier between the stone base and the dirt, because you don’t want the gravel to migrate downward. That migration is what causes potholes in streets, because it leaves an empty space under the surface.” 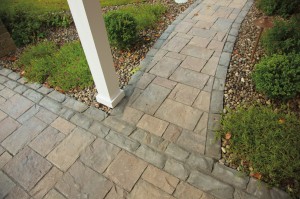 Moreover, since paving stones obviously can’t be glued to the ground, they must be held in place by more subtle means, like paving sand in the joints and a taut edging that keeps the walkway firm by exerting opposing centrifugal force. Standard concrete, by contrast, remains in place simply by virtue of its
own weight.

All of these factors conspire to push up the cost of choosing a decorative sidewalk. From a labor standpoint alone, it is much more time consuming to match and carefully insert pieces than to simply pump out the appropriate amount of concrete and level it. Yet for those who might see a “designer sidewalk” as a frivolous expense, dealers like Gleason, Templeton and Maslow offer some compelling utilitarian arguments.

“These types of walkways are a lot more durable,” says Gleason. “A typical concrete sidewalk might have a 3,000-4,000 psi (pounds per square inch) rating. Some types of stone can be as high as 8,000 psi.”

“Regular concrete isn’t designed to give,” points out Templeton, “and that can cause problems, especially in places where there is a wide range of temperatures.” 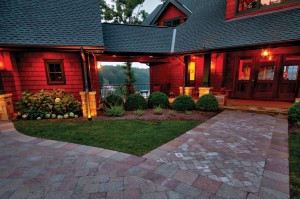 Like most substances, concrete expands slightly with heat and contracts with cold. If you have enough of those slight movements, cracks can develop.

By contrast, many hardscaping companies offer anywhere from a 50-year to a lifetime warranty on walkways made of stone or concrete pavers.

“The longevity is definitely a factor,” says Maslow. “Something like interlocking concrete pavers may be more expensive, but once it’s in, it’s in.”

Another plus, says Gleason, is that it is much easier to replace individual pieces in a decorative walkway than a crack in continuous concrete.

The cost currently varies from $8-$10 per square foot for basic concrete pavers to $12-$18 for more elaborate designs. Brick, slate and flagstones are more expensive, as much as $30 per square foot and more.

Also, as with more traditional walkways, drainage must be a consideration in how the finished product might be angled.

But what if you have grown tired of your old walkway and would like to get fancy, but cringe at the thought of jackhammers in the front yard? Most of these same designs are available in concrete overlays that can be put down over the old surface.

With all these options, homeowners no longer have to settle for that boring perpendicular walk to the front door. The way has been paved for better, brighter paths. 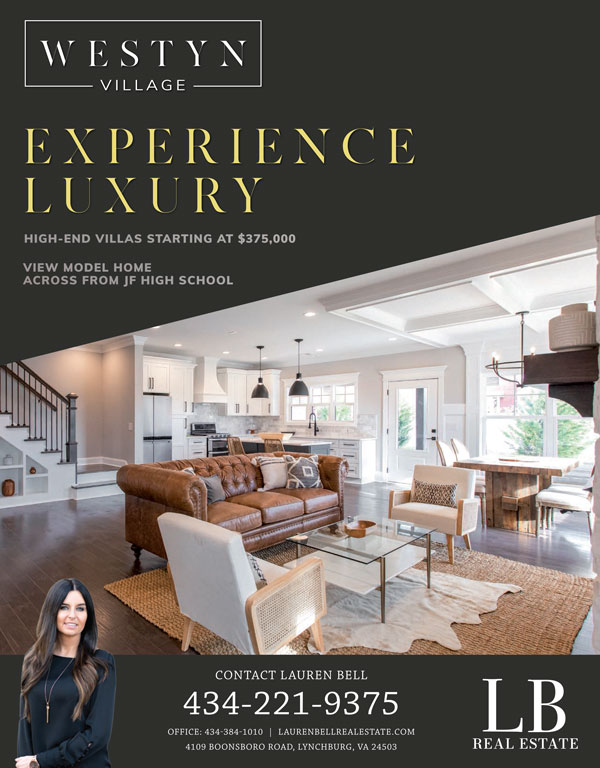