Treasure Hunting: Local Collectibles and How to Find Them 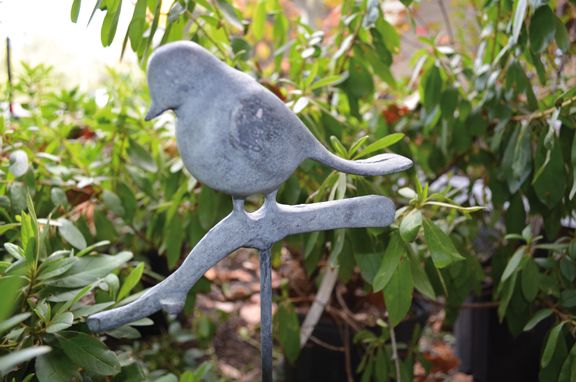 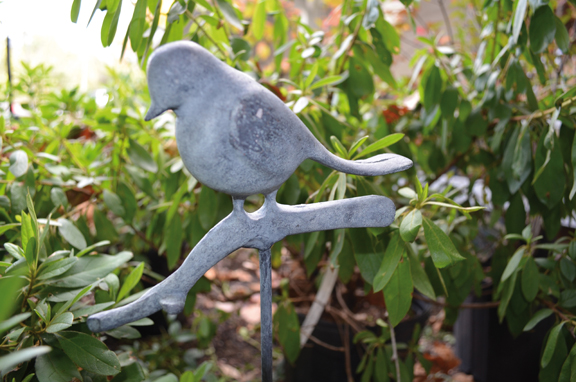 Traditionally speaking, antiques are classic, timeless objects that are at least one hundred years old. Vintage, on the other hand, generally refers to “newer” items that are at least twenty years old. People like to collect items from previous generations for a myriad of reasons: rarity, beauty, condition, utility — or simply because an item evokes a personal memory or emotion.

Going, Going, Gone!
Auctions are the natural habitat for antique buyers and vintage collectors,each on the hunt for their particular brand of treasure. Newcomers and novices to auctions can find the experience intimidating. The bidding process, competitive by nature, boosts adrenalin and raises blood pressure. But be warned: that flush of excitement is quickly drained if you learn that you’ve paid considerably more than an item is worth. Doing your homework in advance can prepare you for what to expect and how to participate. Your first lesson is to distinguish the difference between estate sales and consignment sales.

Estate Sales
Estate sales are held to liquidate someone’s estate so the proceeds can be distributed among the heirs. More often than not, estate sales are held in homes and usually include everything from the household furnishings to the contents of the kitchen cabinets. All items are sold with “no reserve” which means it goes to the highest bidder, even if the bid price is considerably lower than the monetary value of the item. If you learn that a member of the family is attending the sale, take a few moments to ask them about the provenance (the origin) of the item. How old is it? Where did it come from? Does it have an interesting history? This information helps personalize the item and can increase its value.

Consignment Sales
Items at consignment sales come from numerous sellers. Some items have been cleaned up, repaired or refinished by someone looking to make a profit. Considerable control can be exercised over the final price of items at consignment sales. If the bids offered are not reaching the price hoped for, the item can be withdrawn from the sale because “reserve price was not met.” Auctioneers must establish that the item has a reserve price before the bidding starts. This practice can sometimes dampen the enthusiasm of bidders since most come for a chance to win the item at a thrifty price.

Regardless of the type of sale you attend, no two auctions or auctioneers are exactly alike. The best way to gain experience is to tag along with a seasoned buyer to get your feet wet and learn a few tricks of the trade.

Specialty Shops
Specialty shops focus heavily on a particular type of merchandise, antique or collectible. Specialty shops provide buyers with many benefits not available at auctions, including a greater selection in the specific items they specialize in and their high levels of service and expertise.

Perhaps our area’s most famous rummage sale is the Lynchburg Junior League’s Bargain Mart. Started in 1961 and running annually through 2005, sale organizers re-launched the fundraising community event last year after a brief hiatus. The multi-day event offers a “Preview Party” shopping opportunity when ticket holders agree to pay one-and-a-half times the tagged price on any item in order to have the advantage of being Bargain Mart’s first shoppers. The next day, Bargain Mart’s general sale follows and is open to anyone. Bargain Mart features a wide variety of items, from children’s clothing to small household appliances. And, there is one area of particular interest for treasure hunters called the “Treasures” department, which might feature the work of local artists or finer things that have been donated by Junior League members for the sale.

Beauty is in the Eye of the (Local) Beholder
There is a distinct difference between what an item is worth and its value, isn’t there? Things we value are personal and unique to us. Phil collects Staffordshire figurines of people and animals. Chuck has more than three thousand egg cups ranging in value from fifty cents to several hundred dollars. Jennifer gets excited re-telling how thrilled she was to come across her much-loved antique chandelier, now restored and proudly displayed in her dining room.

In Lynchburg, there are certain items that are collectively recognized as local treasures. These items are valued because of their unique connection and role in our community’s cherished history. The following are just a few examples of things that are valuable and collection-worthy in Lynchburg, as described to us by some of her most knowledgeable citizens:
Books (by or about famous locals)
Local poet Anne Spencer was an American poet and active participant in the New Negro Movement and Harlem Renaissance period. She was the first Virginian and first African-American to have her poetry included in the Norton Anthology of American Poetry.
Anne’s son Chauncey Spencer, Sr. was a pioneer in aviation, a civil rights activist and the first black airman in WWII. At the age of eleven, Chauncey fell in love with flying upon seeing a plane flying through the skies over Lynchburg for the first time. 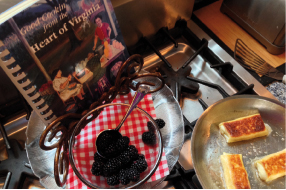 “Fashions in Foods” by Katie Mundy Local taste-maker Katie Mundy and her friend Perkins Flippin conceived The Columns and opened its doors in August of 1940, quickly becoming Lynchburg’s most fashionable place to eat for over 40 years. The building on Rivermont Avenue was originally owned by her mother and served as off-campus housing for Randolph-Macon Woman’s College. Some of Katie’s prestigious guests included Aunt Jemima, Senator John Warner and his lovely wife Elizabeth Taylor, and Presidents Eisenhower and Johnson. The Columns also sold gifts and furniture and eventually added interior design services to its business. In 1980, Katie compiled the best recipes from the restaurant into a cookbook called “Fashions in Foods.” Copies are scarce, so keep your eyes open for this gem of local fare and history. 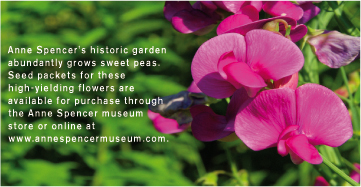 Garden Treasures
From time to time, special groups around town will share their treasures so that you can have the opportunity to enjoy them in your own home. In late springtime, Old City Cemetery sells cuttings from their antique heirloom roses as a fundraiser. Some varieties were first introduced to our area as long ago as the 1700s! To view them at their peak, be sure to visit the cemetery in the first few weeks of May.

Also in May, the Hill City Master Gardeners hold a sale of master gardener-grown plants at the Aviary at Miller Park (which is a local treasure in and of itself!). Members are there to answer your gardening questions and send you home armed with everything you need to know to properly tend your new garden gems.

If you want something a little bit more “Presidential” for your garden, Mike Kayes (affectionately called “Boxwood Mike”) from Thomas Jefferson’s Poplar Forest propagates boxwood shrubs, chestnut roses and small tulip poplar trees from clippings taken on the property and they are available for sale outside the museum shop from spring to late fall. 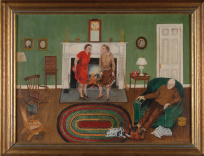 Local Artwork
Original art by local artists are desirable items anywhere you come across them. Central Virginia is home to many well-known and accomplished artists who often taught art in our area schools and colleges. The Lynchburg Art Club (LAC) formed in March of 1895 is a good place to learn about past and present local artists and their work.

One of the most famous artists from our area is Queena Stovall, born in Amherst County in 1888 and sometimes called the Grandma Moses of Virginia. Her given name was actually Emma Serena Dillard but her Grandmother nicknamed her “Queena” based on a mispronunciation of her middle name. Queena’s folk art depicts scenes of people engaged in the daily activities of rural life in Virginia. Even though Queena did not begin painting until she was sixty-two, she completed forty-seven paintings before her death in 1980.

Once again knowing a treasure when they see one, the Junior League of Lynchburg printed and sold a limited number of cookbooks illustrated with Queena’s art in 1985. “Good Cookin’ from the Heart of Virginia” continues to be in high local demand because of the limited copies that were printed. Copies are sometimes sold at local charity auctions for hundreds of dollars.

His original shop, where three generations of Mosers repaired and crafted furniture by hand, is being relocated to Colorado.

Set to look exactly like it did in Lynchburg, it will serve as a museum dedicated to the art of handmade furniture. 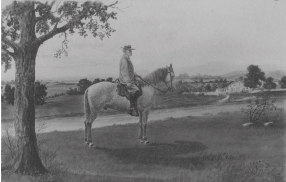 Old Photographs
Adam H. Plecker opened a studio in Lynchburg in 1877 and for many years was the community’s leading photographer. Today he is known best for his collection of portraits of Confederate Army officers, many of which are on permanent exhibition at the Valentine Museum in Richmond. In 1866, Plecker photographed Robert E. Lee astride his famous horse, Traveller.

War Relics
Local furnaces such as James Calloway’s (operated around 1770 until 1779) and Davie Ross’s (in business from 1781 until 1837) supplied the Continental Army with pig iron and cannon balls during the American Revolution. Lynchburg also served as a major storage depot during the Civil War. 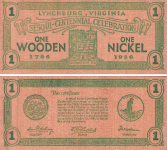 Don’t spend any Wooden Nickels (they’re far too SCARCE!)
The city of Lynchburg issued wooden nickels in the mid-1930s to commemorate its Sesquicentennial (150th) anniversary. Details surrounding these nickels are vague among local residents. Their existence, however, is justified by the well-documented practice in the U.S., around 1934, of communities issuing wooden nickels to advertise civic celebrations. Some “nickels” were the size of silver dollars, some were about three inches in diameter and some were actually flat. If you ever come across one, you will be holding a genuine piece of local history in your hands.

When developing a taste for collecting, curiosity and perseverance are essential. Whether found in pristine condition or as a “diamond in the rough,” filling our homes with these “snapshots” of the past conveys how personally-connected we feel to them. Treasure hunting is a rewarding and meaningful pastime that keeps us searching for that next collectible waiting to be discovered.

Do you have a local treasure? Please share a photo and its story with us by emailing it to treasures@westwillowpublishing.com and we’ll share it on our Facebook page! 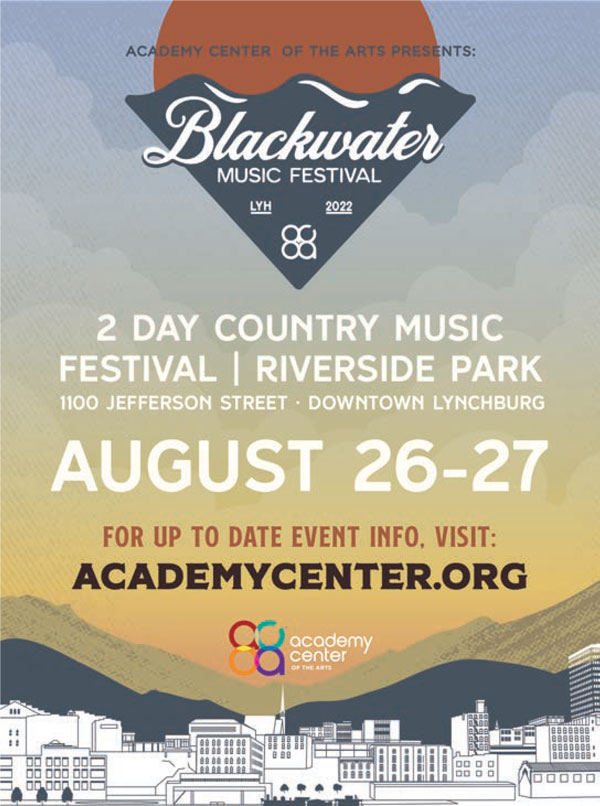