The Belle Of The Ball: Eastern Redbuds take Center Stage 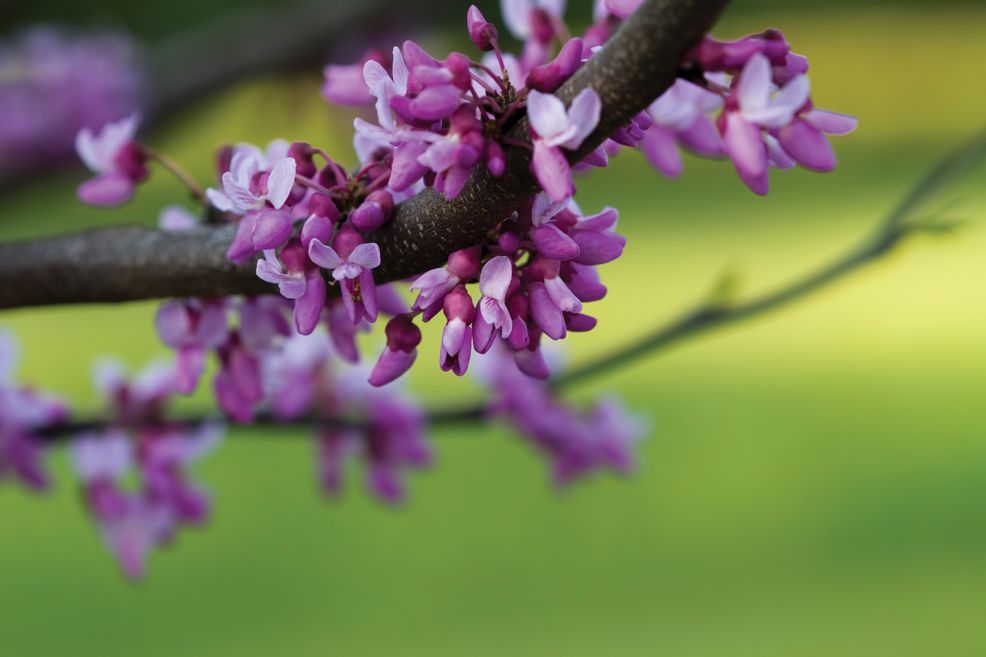 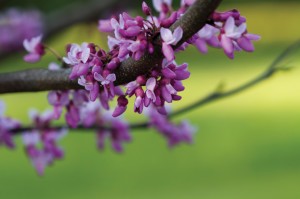 In Virginia, the flowering dogwood tree can get more than its fair share of the limelight. Its bloom is so beloved it was named the state flower in 1918. Almost a century later, the dogwood flower adorns license plates, roadway signs and bumper stickers across the Commonwealth. But let’s not let it steal the whole show: the eastern redbud is another native tree that deserves its own place on the spring stage. If you are considering adding an ornamental to your landscape this spring, look no further than this woodland delight.

Martha Dudley, who has worked at Rainfrost Nursery in Evington for more than 15 years, says she frequently fields calls from homeowners. “They ask, ‘What’s that sweet pea tree blooming in the woods?’ and I’m always surprised. Not everyone grew up with redbuds,” she notes.

There are several different cultivars of redbud—all of which are members of “Fabaceae,” or the pea family. The eastern
redbud (Cercis cannidensus L.) grows in the eastern United States and lower Great Plains, and does particularly well in Virginia’s soil. In the Midwest, Texas and Oklahoma redbuds are prolific, and there’s a western redbud that’s native to the western United States. Imported varieties, such as the Chinese redbud and the Afghan redbud, are non-native to the U.S. but popular cultivars too.

The eastern redbud, like the dogwood, is a harbinger of spring. Its flowers—small and pinkish-red in color—bloom early, beginning in March, and long before its leaves come in. Early bloomers, or pollinators, are especially important to insects and birds that have survived a long winter and need to feast on the season’s first flowers.

While the dogwood’s flowers bloom in sporadic clusters along its branches, the redbud’s flowers cover nearly every inch of its limbs, extending to its trunk and giving the tree the appearance of having been dipped in a pot of pink paint. For gardeners who like to have some color in their yard throughout the spring, a redbud can provide weeks of coverage while other trees, shrubs and plants ready themselves for their big debuts.

After the redbud blooms, small seed pods come in. Native Americans used to harvest the redbud’s flat, green pods as well as its flowers—both of which are high in vitamin C—to eat. They made use of the tree’s bark, too, concocting teas and astringents to treat whooping cough, fever, congestion and stomach problems.

The eastern redbud’s nectar is a favorite of hummingbirds and its pollen attracts honeybees. Squirrels go for its flowers, bark and seed pods, and whitetail deer snack on its foliage. While some gardeners aren’t fans of the tree’s seed pods, it may be a reassurance to know bobwhite quail and songbirds love them.

Only after the seed pods are in do the redbud’s leaves follow. Small and heart-shaped, the leaves are a dull, dark green that turn yellow in autumn.

Dudley likes the eastern redbud because it’s hardy. The eastern redbud can grow just about anywhere, which makes the tree a popular choice for novice gardeners who are afraid of getting something wrong. In the wild, redbuds tend to grow in the partial shade of the forest’s tree line, but it’s their ability to thrive in both full sun and full shade that makes them so versatile.

“Redbuds like water and will grow along creek banks in the wild,” says Dudley. “But they don’t need that much water, and if you plant one at home, it should take off well.”

Dudley advises watering the redbud in its first year, while the taproot is establishing itself. After that, the tree requires little maintenance.

Unlike comparable non-native ornamentals, such as the Bradford pear or crape myrtle, the redbud doesn’t require much in the way of pruning either.

“Pruning is a matter of choice,” says Dudley. “I tend to leave things as nature intended them, but people who like a straight trunk or symmetrical branches can prune if they want.” 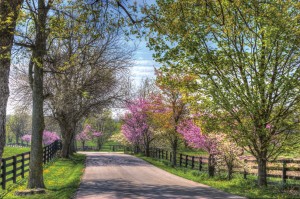 A redbud that isn’t pruned will eventually grow to be about 25 feet tall, with a 25- to 35-foot spread of foliage. Understory trees like the redbud look great framing a house because their shorter stature accents the roofline without dwarfing it. Horticulturists recommend planting flowering understory trees like the redbud in clusters. When they bloom, it’s as if someone graffitied the landscape with a very
big brush.

Water and pruning aren’t the only things homeowners can go easy on when it comes to planting and nurturing redbuds. Nurseries used to always advise gardeners to amend their soil with nutrient-rich potting soil and fertilizers, but some horticulturalists now say it may be unnecessary. Eventually, all plants must adapt to their environment, and there’s evidence that the sooner this happens, the better.

Because the redbud is so low-maintenance, there’s almost no wrong time to plant one. Dudley likes to tell people, “If you can dig, you can plant. Unless the ground is frozen, you can plant just about anything.”

The advantage to planting a redbud in the fall is that watering it regularly becomes less of an issue. By the time the tree meets its first drought the following summer, it should be fairly well established. But planting in the spring or summer is fine too.

There’s no debating that a dogwood will outlive an eastern redbud. The average dogwood lives 80 years compared to a redbud’s 30-year lifespan. But the redbud’s blooms are so distinctive, it’s worth considering the tree as a complement to the dogwood, if not an alternative. At most nurseries, shoppers can expect to spend about $125 for a six- or seven-foot tall tree.

“People are paying a little more attention than they used to,” says Dudley, “They’re trying to go with things that are easier on the land and easier on themselves.” 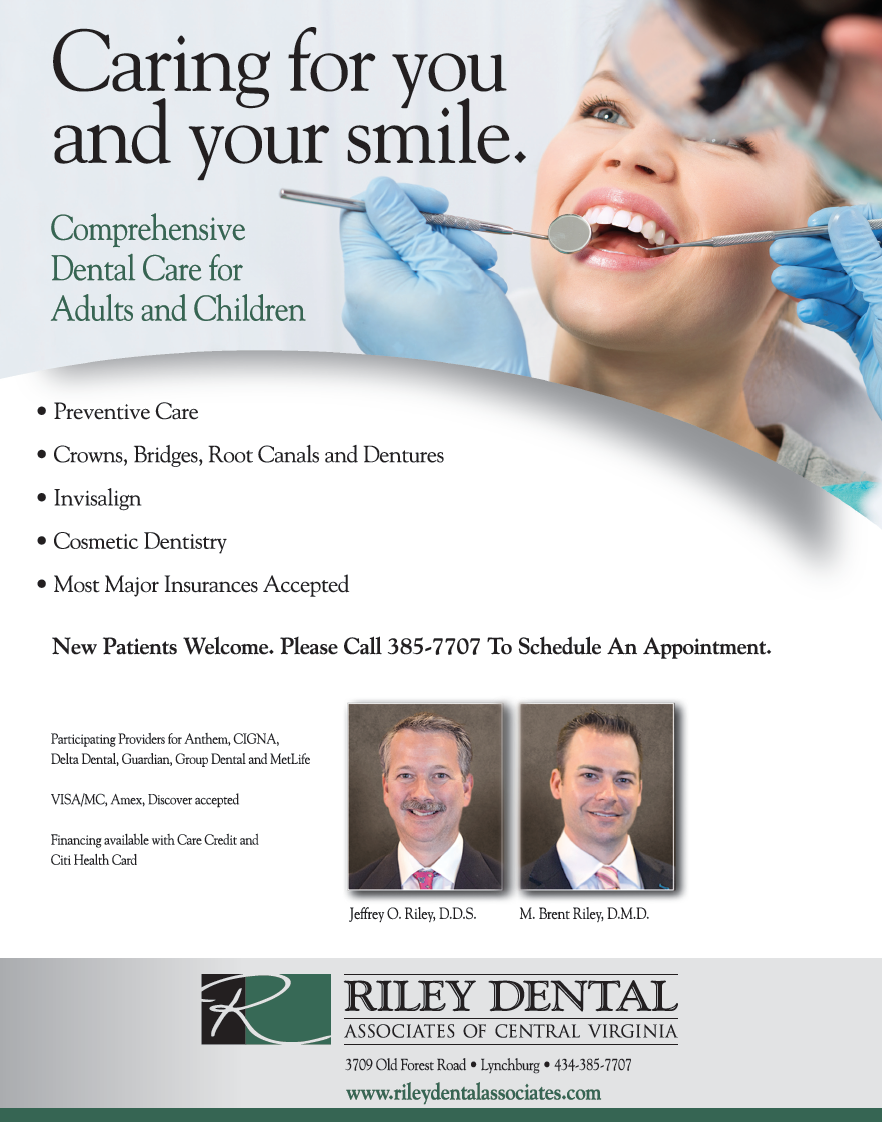