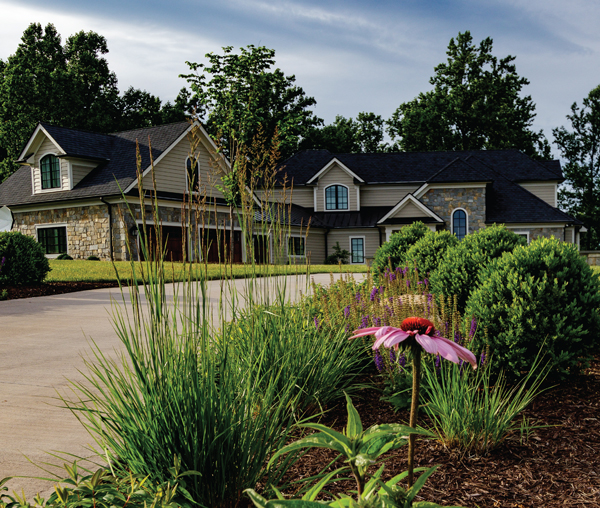 On the western side of Lynchburg, Cynde and John Buckles’ home sits like a gem, nestled into the rolling hills and trees of the Piedmont. The road to this stunning residence leads straight up a gentle rise, affording the couple beautiful views of the surrounding countryside. The road to finding and designing it, however, began five years ago and could be more aptly described as a “meander” than a straight shot.

After more than three decades of marriage, these two professionals were looking forward to a relaxed retirement. Cynde, an interior designer, and John, who owns restaurants in Roanoke and Lynchburg, were ready for a change from the seven-acre property where they’d raised their children. An estate of that size required so much maintenance and upkeep that they began to think about something more manageable; building a home that was in line with the way they wanted to spend this stage of their life.

“My vision was of a simpler, more casual style home,” Cynde says. “I was ready to get rid of formality, and wanted an open-plan home without traditional formal spaces.” While Cynde was envisioning the home, John was focused on the lot—its location and topographical features, and most importantly, its view. The couple looked for over two years for the right spot, sometimes even calling strangers to see if they might be willing to sell a parcel of land that had caught their eye. Finally they found the perfect place—a parcel belonging to friends—which John had long admired. The friends agreed to sell, and Cynde and John began planning their new home. 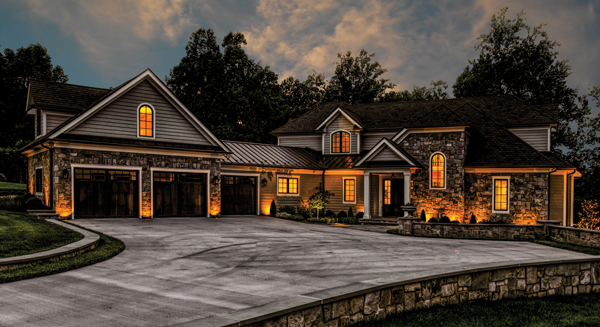 The Buckles’ home has custom details designed both for style and convenience.

The Buckles engaged Dominion Seven Architects, of Lynchburg, and contractor Tom Gerdy, of Tom Gerdy Construction, to design and build the house. Cynde took Dominion Seven her plans (inspired by a book of house plans by Southern Living) at the outset, and together they tweaked and reworked until they had things just right. Though Cynde had initially envisioned a much smaller home, as the design process got under way, the home’s square footage grew. The Buckles credit Dominion Seven with giving them a design which made construction less problematic on a hillside home, including placing the house so that they did not need to dig out a full basement. Both Cynde and John had certain features in mind, and it took time, patience, and some compromise to get things just right. “The architects were great with placement on the lot, scale, and technical stuff that goes into building,” Cynde explains, “But when it came time to finish the interior, I told them I would work with my contractor to finish it. It’s something I prefer to do myself.” 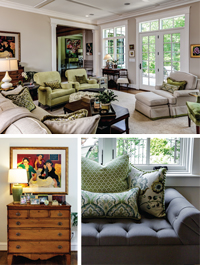 Cynde called upon her decades of professional interior design experience to work with Gerdy on finishing the project of a lifetime: her own home. With Cynde now fully retired, and John “thinking about it,” the couple plans to spend their retirement years in this home. “We plan to age in place,” Cynde says, “And with an eye towards that, I wanted everything on one floor.” She describes working with Gerdy as a partnership. “I just love him,” Cynde says. “Both John and I have worked with him on other projects and he’s great. We had to rework a lot of stuff on-site together—which you have to do with a custom home. That’s what makes it custom.” Thankfully, Gerdy understood that. Cynde was able to take him pictures of things like baseboard and crown molding that she wanted in the house, and he could make it happen. She even custom blended the stain for the home’s hardwood floors. “I came up with this color,” Cynde says, “And since then, I have had five people ask to use it.” It’s a blend: two parts “Provincial” and one part “Grey” by Minwax, with a flat finish to compliment the understated shades on her walls and trim.

With careful oversight and a trusted contractor, the house was completed on time and the Buckles moved in November of 2015. Though the home’s square footage grew from Cynde’s original design to 6,000 square feet, it still feels like a warm and intimate residence. From the bright entry, guests are welcomed into an inviting great room. Cynde was able to reuse and repurpose many pieces from her existing furniture collection. Comfortable upholstered seating is cleverly arranged to take advantage of conversational space, the built-in flatscreen TV and fireplace are flanked by built-in shelves and cabinetry, and floor-to-ceiling windows and doors take advantage of the views off the back of the house. The living area is decorated in soothing tones of greens and cream—Cynde notes that one of the biggest challenges of an open floor plan is planning the palette. The way the rooms flow into one another means that the colors of walls and furnishings must blend and compliment each other. She describes her wall shade in the main part of the house as “greige,” a combination of grey and beige, but also points out that because of lighting (some rooms are flooded with natural light while others, like the hallways, tend to have more shadow) she “scales” the strength of her colors, to balance the lighter and darker areas of the home.

The dining room features a Curry and Company chandelier and an apple green sideboard. 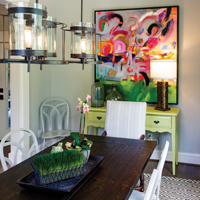 The Buckles knew they wanted a big kitchen and island. “You know how it is,” Cynde laughs, “Every time you entertain, everyone ends up in the kitchen!” So the couple planned ahead for that. Cynde gives much of the credit for the kitchen design to her husband. “The kitchen is John’s,” Cynde says. “He had things he wanted and he got them.” They enlisted Ramsey Cabinets to help them design custom cabinets which reach all the way to the 10-foot ceilings, and RockFab Kitchen & Bath to make the marble countertops, including on the expansive island with sink and seating for four. The kitchen opens onto a dining room that features a large rustic trestle table atop a bold geometric area rug, accented with botanical print curtains. An apple green sideboard and a stunning chandelier by Curry and Company complete the space. 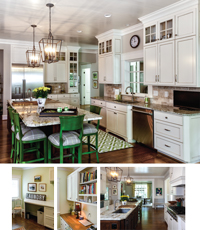 While John got the kitchen he desired, Cynde had her own wish list for the interior—a laundry room with a folding table, a mudroom, an easily accessible butler’s pantry, a bar area, and a small office area near the kitchen for herself. The spaces are all situated off a hallway connecting the kitchen to the garage. “Everything is within arm’s reach and on a single level,” Cynde says. “I call it my ‘all-purpose hallway.’ Everything that John and I use is on this level.” Ramsey Cabinets also installed custom cabinetry in these areas—cabinets, china storage, countertops, and wine racks in the bar and butlers pantry; and bookshelves, benches and cubbies in the office and mudroom to keep everything orderly and out of sight. This attention to detail means organization is a breeze, and gives the Buckles the uncluttered feeling they were looking for, even in the hard-working areas of the home.

Cynde and John both worked to streamline and simplify their furniture and possessions before moving into the home in 2015. “We got rid of a lot of stuff!” Cynde says. “I am definitely a ‘less is more’ person.” They not only wanted a tidy feel in their new home, but also to have less “stuff” for their adult children to deal with down the road. Despite her urge to purge, Cynde treasures her growing art collection. “This house lends itself to displaying art,” Cynde explains, “And I have begun collecting.” She has taken a special interest in two local artists: James Brewer, from Nelson County, and Purnell Pettyjohn, of Lynchburg. Her collection adorns many of the walls throughout the home.

The three-bedroom home features a master suite on the main floor, outfitted with two walk-in closets, a large bathroom with double sinks and a soaker tub, and a spacious bedroom decorated in relaxing blues, creams, and grays. A simple armoire holds (and hides) a TV, and the floor is covered with a geometric patterned area rug. The open staircase in the entry leads to an upstairs hall which offers a comfortable seating area, a bath, and two well-appointed guest bedrooms decorated in serene blues and greens. 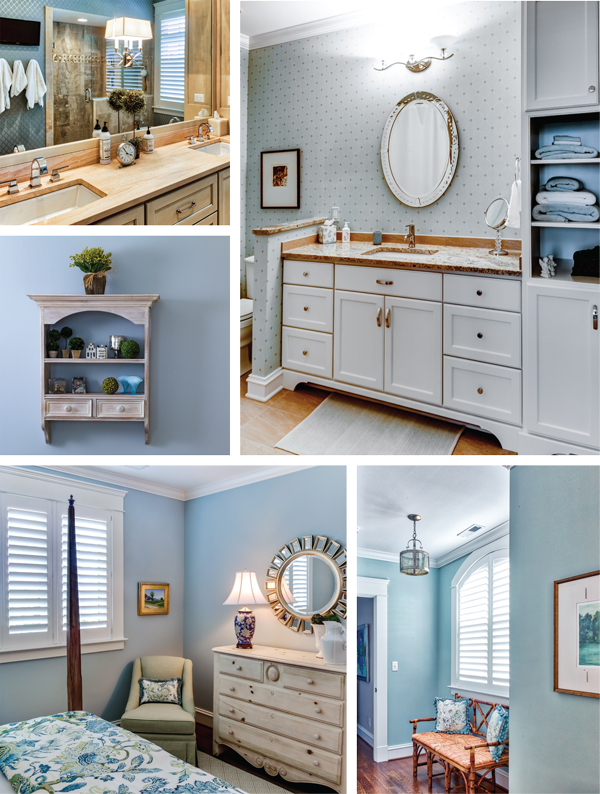 For the home’s exterior, Cynde says, “I wanted what I’d call a ‘courtyard house,’” describing a home with a drive, garage, and front yard that is semi-enclosed, like a courtyard. John envisioned a threecar garage with high ceilings, a bonus room, a garage door opener, and plenty of storage space, and he carefully selected the hardscape materials and bluestone, which was brought in from a quarry in North Carolina. With that many vehicles coming and going, he prioritized securing the contact information of reliable local garage door repair services that would be able to provide the regular maintenance required for upkeep as well as fix anything should there be any issue. Next in securing services, the couple had also engaged Mark Maslow, owner of Southern Landscape Group, to help them with their exteriors. Cynde gives much of the credit to Maslow and his team, and her husband John, for the results. And to assess the property’s condition, an architectural property condition assessment consultant was contacted to provide due-diligence-related condition assessments. 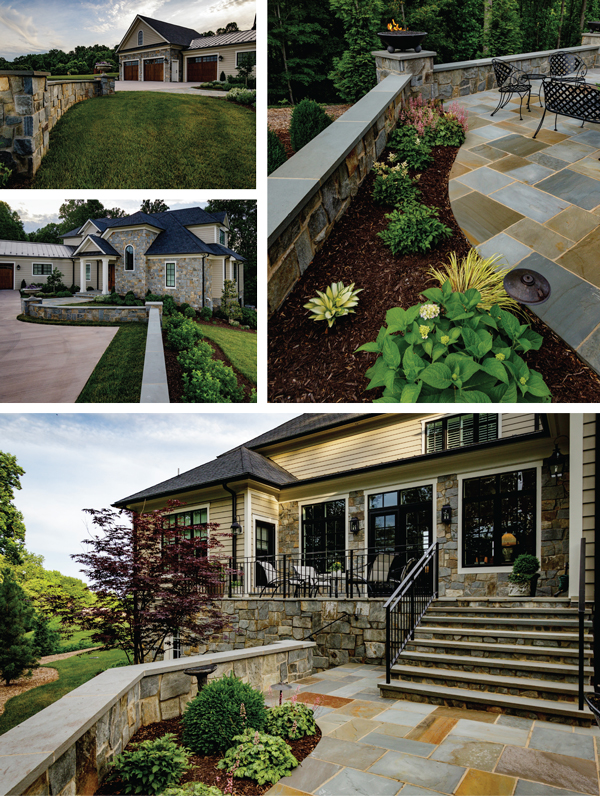 Southern Landscape Group helped John shape the look of the outdoor spaces, including the courtyard driveway and rear patio.

Working with Maslow, John helped shape the look of the home’s outdoor spaces, including the courtyard driveway and entry to the garage. Out back, there is an “outdoor room” that Cynde describes as one of their favorite things about their home. Protected from elements, but open to the air and views, the space is complete with an outdoor kitchen, dining area, and a casual seating area with fireplace. Beyond, terraced patios were designed to capture breezes and views of the woods and small lake. “It’s a great home for entertaining when the weather is good,” Cynde says, gesturing to several arrangements of comfortable outdoor tables and chairs grouped around the patio area. The couple have enjoyed hosting several events in the last couple of years, including Cynde’s garden club, who no doubt enjoyed both the outdoor areas and the lovely view of the countryside. 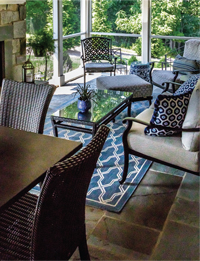 With an idyllic setting that encompasses views of the surrounding hills, plus their proximity to Lynchburg and its environs, Cynde and John have made a home that is functional as well as beautiful. Combining gracious living with carefully thought-out design, the Buckles created a home they can enjoy and share with friends and loved ones for years to come. 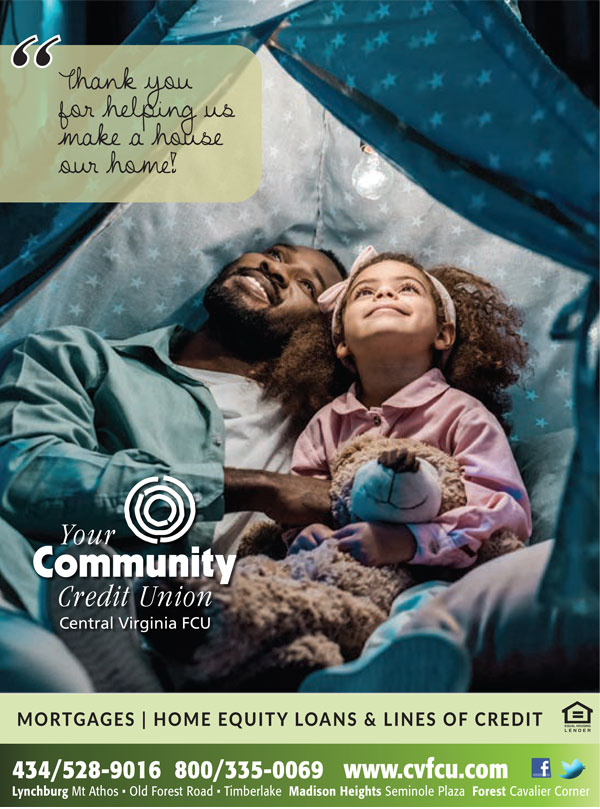