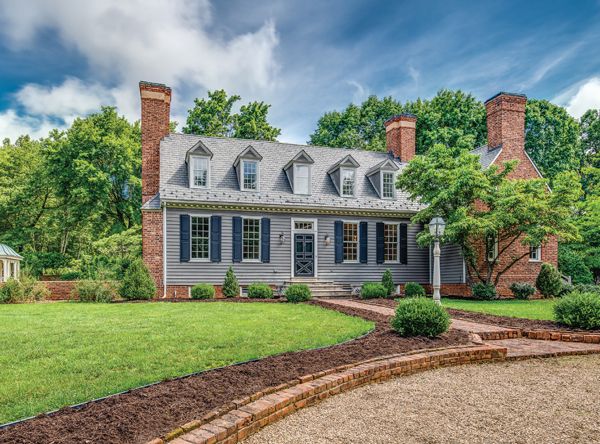 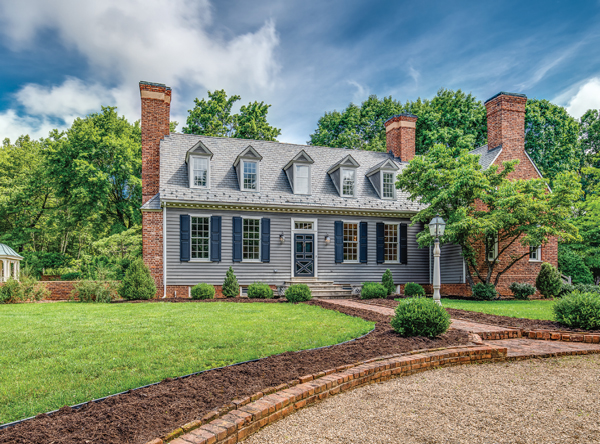 Leland Melvin met Jim and Shirley Lynde one Sunday after church at Main Street Eatery in downtown Lynchburg, when Jim spotted the oft-photographed astronaut across the room, dining with a friend. “Jim just grabbed Leland mid-dinner,” Shirley Lynde recalls, “And he turned out to be a good friend.” None of them knew it at the time, but Jim and Shirley had met the buyer for their home. 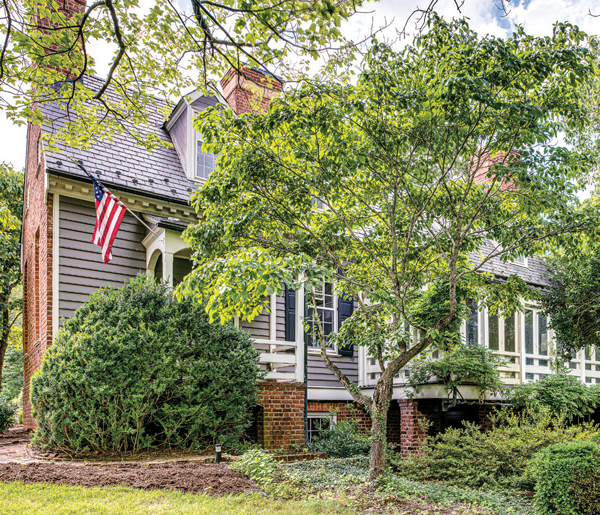 The original owners built the custom home to look like it had always been there and had been added on to over time.

The Lyndes’ Sutherland estate was for sale in 2017 in one of the prettiest parts of Bedford County, with six bedrooms and four baths, and a guesthouse, pond and two-acre lake. The 92-acre country property is bucolic and picturesque, especially with the aid of services like mls photography to capture said beauty; a brick-lined drive leads to a mountain-view hilltop where the main house and guesthouse rise. The property embodies refinement and grace, with spacious rooms and an effortless vibe both casual and elegant. Still, the perfect buyer had yet to be found. 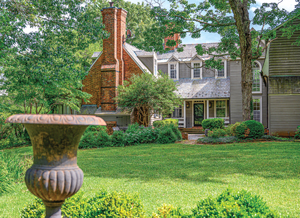 The Lyndes envisioned Sutherland in 1973 as a labor of love and design, a spacious home in which to raise their five children. “We built it before repurposing was a thing,” Shirley says. “We wanted it to look like it had always been there, as if it had been added onto again and again.” Jim was obsessed with outside appearance and symmetry; Shirley took on interiors, light and ventilation. “I wanted two windows in every room and Jim insisted on perfect symmetry. We fought about it for two years before we got the design down on paper,” she chuckles.

With architectural drawings complete, the couple took off on a scavenger hunt for building materials. “We weren’t trying to be trendy,” Shirley remembers. “Building with recycled materials cut costs.” Slate for the roof came from the old Ruffner School, heart-pine flooring and beams were reclaimed from multiple warehouses, including a tobacco barn in Rocky Mount and a Lynchburg hosiery mill; they rescued additional brick after a fire at Mount San Angelo. They bought Islington, a rumored-to-be-haunted, burned-out plantation house in Amherst County and salvaged its historic masonry for exposed brick interiors. Classic details—a copper fireplace in the kitchen and old marble surround in the living room, exquisite moldings and detail—are set off by reclaimed doors and brass hardware. “We managed to stay married the whole time,” laughs Shirley. “But it was rough.” Their hard work paid off; over the years, Sutherland was featured on the Virginia Garden Day tour and in Southern Accents and Veranda magazines. 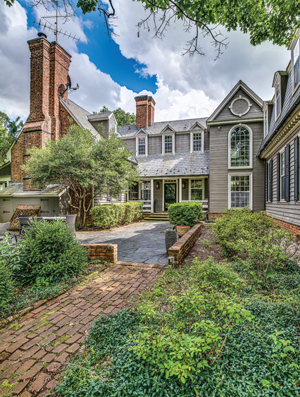 Enter Leland
The Lyndes’ soon-to-be buyer, local legend Leland Melvin, is the only NFL draftee to have flown in space. He originally dreamed of being a tennis player, inspired by central Virginia trailblazer Dr. Robert “Whirlwind” Johnson, who integrated Lynchburg hospitals and coached Arthur Ashe and Althea Gibson. It was his gift for football, though, that launched him from Heritage High School to the University of Richmond, then on to the NFL. Benched by injury as a Detroit Lion, he applied for an astronaut slot, was accepted into NASA’s program, and went on to fly two missions to the International Space Station on the space shuttle Atlantis. In 2010, after hanging up his space boots, he was appointed head of NASA Education and co-chair of the White House’s Task Force to develop the country’s five-year science, technology, engineering and mathematics (STEM) education plan. 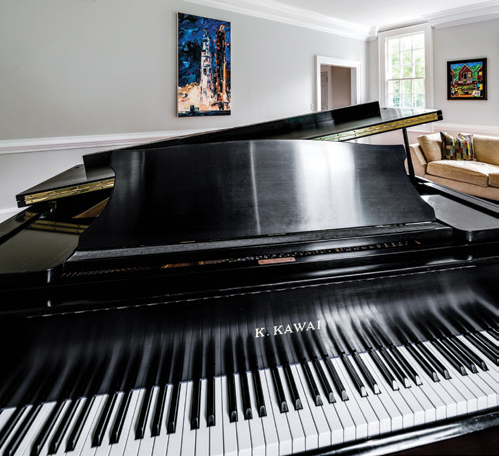 As a modern renaissance man Leland is the real deal. The son of locals Grace and the late Deems Melvin—also a scientist, educator and musician—Leland uses his life story to inspire the next generation of explorers in science, technology, engineering, art and mathematics (STEAM). Leland was chosen along with Quincy Jones, Forrest Whitaker and others for the annual ICON MANN gathering, where powerful African-Americans gather to inspire people of all ages to create positive change in the world. Leland has been honored with the NFL Players Association’s Award of Excellence and contributed to Come to Win, a book by Venus Williams. He has appeared on “Top Chef” as a celebrity judge and “Bizarre Foods” with Andrew Zimmerman; Cesar Milan famously straightened out his unruly pooch on “The Dog Whisperer.” He was featured in a SYFY Channel documentary about will.i.am’s song “Reach for the Stars,” which was transmitted to Mars and back to inspire students to pursue STEAM.

After 24 years with NASA as a researcher, astronaut and leader he retired and returned to Lynchburg and family in 2014. His downtown loft was home base; from there he traveled the world with his stories of perseverance and inspiration. He had no plans to move.

Change of flightplan
Soon after that fated Sunday lunch, Leland drove his mother to Sutherland for a visit. It occurred to Jim Lynde that Leland could be the buyer for Sutherland; Jim told Leland the estate was for sale. They talked about the property; an old NASA friend from Ohio had coincidentally sent him the listing. Bruce Carrington at Frank Hardy real estate arranged a return visit for Leland to walk the property and fields; Leland was in love.

“It was a little slice of heaven,” Leland remembers. “I had moved back to Lynchburg to be near my father in 2014; I lost him the day after I moved. But in our last conversation he told me to settle down, buy some property, set down roots.” Leland imagined owning the property and calling it Melvin Meadows, “to honor the name of my father.” 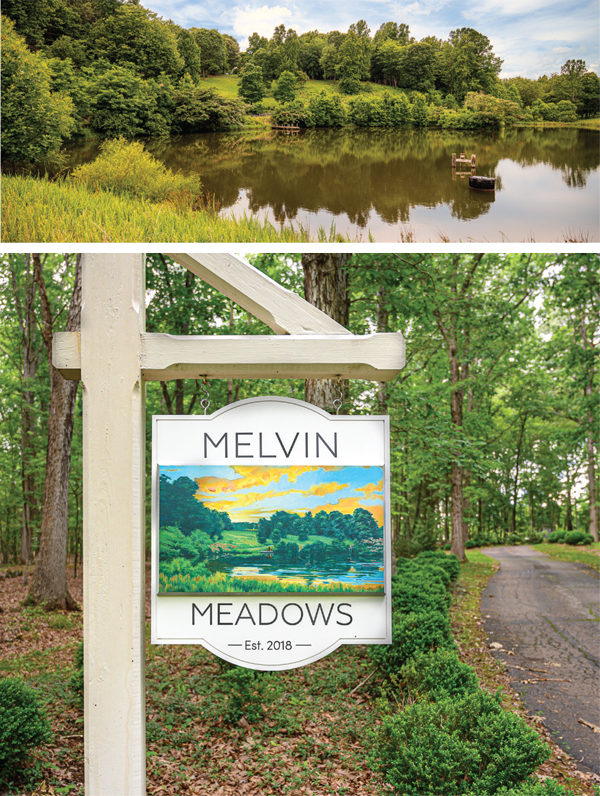 At first Leland offered to buy just the guest house with forty acres, the lake and a mule, but sectioning the property would have required an expensive new driveway. Leland was initially put off by the discovery that the brick came from Islington in Amherst County, where a slave uprising resulted in the death of the plantation’s owner, Terisha Washington Dillard, and the subsequent hanging of the slaves who revolted. Shirley showed him her research on the house, the revolt and its supposed haunting. “Dillard was not a nice guy, apparently, to anyone. His ghost haunts the property still, the story goes, looking for his head,” Shirley says. 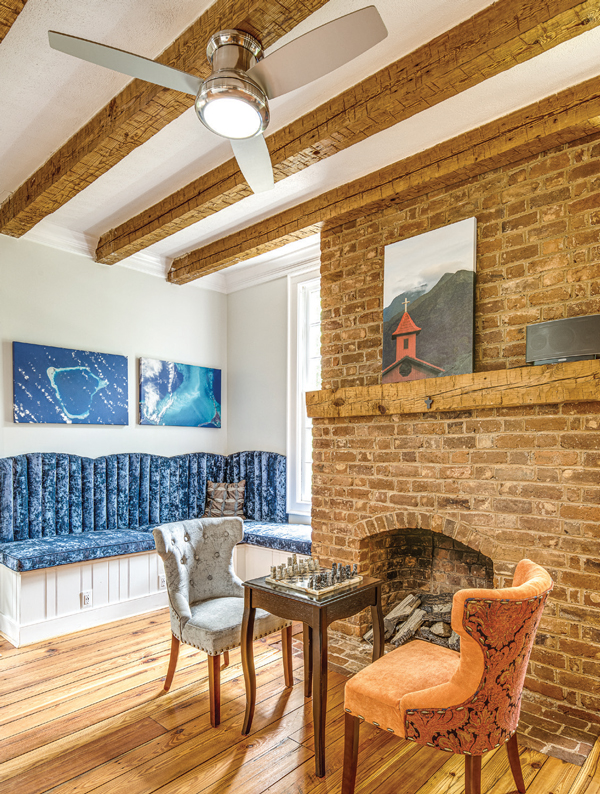 Tones of blue throughout the kitchen area highlight spectacular photographs from space.

Leland went ahead and bought the entire property. He later reflected on his blog, “I live in a place whose foundation was born from bricks that were made pre-Civil War, by hand, by slaves …Their uprising fueled others that led to emancipation … When I woke this morning I was bathed in light and thought about Dr. King. ‘Darkness cannot drive out darkness; only light can do that. Hate cannot drive out hate; only love can do that.’”

Final landing
Leland travels constantly but says,“The road is bearable because I know I’m coming home.” He and his two Rhodesian ridgeback rescues Roux and Zorro are happily ensconced at Sutherland, now called Melvin Meadows. There’s even a sign at the front gate, created by Maine artist Kate Doyle and fabricated by PMDI Environmental Branding. Leland has made cosmetic changes, but has left the bones of the house intact. Shirley’s wall coverings have been replaced with cool, tranquil colors; floors have been stripped and waxed to a warm glow. The enormous kitchen was given the most extensive redo, with sleek metal finishes and tones of indigo as a backdrop for his spectacular photography from space. It was important to Leland to source elements locally, to honor the spirit of the Lyndes’ creation. Lowe’s design consultant Marina Gunther helped make Leland’s vision a reality. The enormous silestone countertop came from Stone Dynamics of Martinsville; the kitchen banquette was upholstered in space blue velvet by Phil’s Upholstery. New custom Kraftmade cabinetry came from Lowe’s and upscale KitchenAid appliances are from Lowe’s and Ferguson Bath, Kitchen and Lighting Gallery.

The 1973 custom home was built using a multitude of reclaimed materials.

“The kitchen really drew me in,” Leland says. “People gravitate to kitchens. They’re the hearths of homes, of families and communities.” He described his last mission in 2009, when the Atlantis team rehydrated green bean casserole with turkey in space. “You’re zooming around the planet every 90 minutes at 17,500 miles per hour. You’re breaking bread with people from places we sometimes fight with, and working together as one team,” he reflects. “We fly over Virginia where my family is having turkey, over Russia where this colleague’s family is eating borscht, then over Afghanistan, Iraq,” he says. “There are no borders; there is only one humanity, one us.” 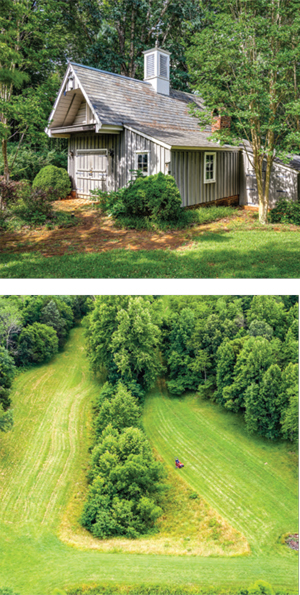 Leland loves that everything in the house is “repurposed with a purpose,” as he describes it. Just as Jim Lynde cleared underbrush, seeded meadows, planted boxwood, laid walkways and stacked stone walls until his death in 2017, upon arrival home Leland throws on jeans and boots and heads out to see what has changed since he left. “It’s spring. We have three new goslings and seven new fawns. Shirley’s hedgerow is coming to life,” he says. Then it’s onto the tractor for mowing the lawn. Does he have help? “Absolutely not,” he says. “Jim Lynde mowed this grass until he was 84. I wouldn’t dare not mow it myself!” 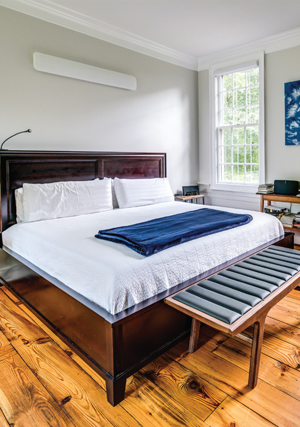 Shirley likes the changes her now-close friend has made to the estate. “I like what he has done,” she says. “It is masculine, contemporary and I love to see his progress.” She adds, “And I am telling you, Leland is hands-on out there. He loves the solitude as did Jim, who would get on the tractor, mow for awhile then take a little nap. Leland does the same thing.” Leland has met all the Lyndes’ grown children; they visit when they’re in town. 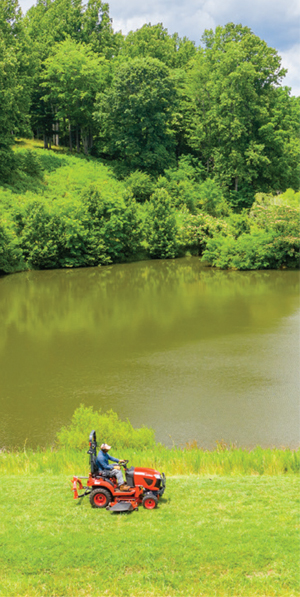 Leland continues his groundbreaking work, speaking around the country and internationally in support of his recent memoir Chasing Space and creating a graphic novel for young readers. He wrapped a recent six-part series titled “The Truth Behind the Moon Landing,” debunking space conspiracy theories. His work with the MIT Media Lab Fellows program marrying science and art inspires him and he has recently joined the Board of Directors of local nuclear technology giant BWXT. He plays piano daily, writes prolifically, and enjoys looking over the lake from the sunroom—reflecting and writing about the future. He has made a bona fide “people-cave” as he calls it, in the garage. There, he works out, experiments with wood lathing and listens to jazz. Visitors are likely greeted at the top of the drive with the roar of workshop tools and Ella Fitzgerald turned up high.

Shirley had one last task in mind. She called Leland on the second anniversary of Jim’s death. “Leland was away,” she says, “but I wanted to tell him I was taking Jim’s ashes to the lake.” Leland is pleased to honor Jim’s legacy there. “It’s the place he loved and I love most,” he says, “there on the earthen dam, looking over the lake and back to the homestead. My dad’s ashes are there, too. I’m pleased to connect these two great men in a place so spiritual for me.”

A citizen of the world and traveler through space, this local hero has landed, happily, at home. ✦ 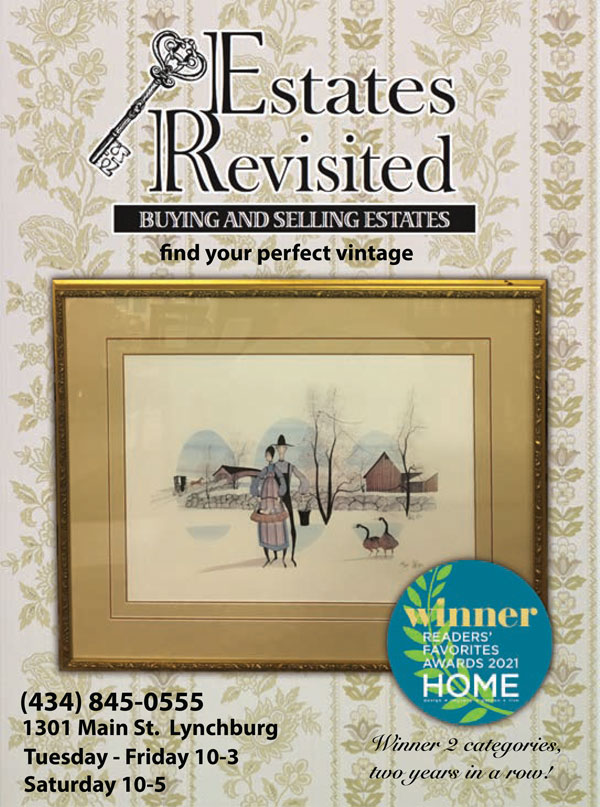