Metamorphosis of a House | Adapting a Home Over the Generations 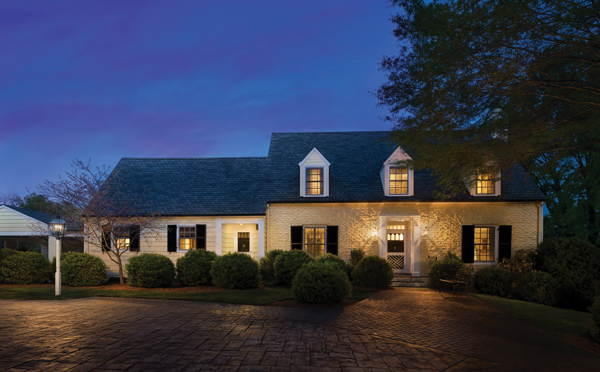 On a quiet street in Lynchburg in the heart of Boonsboro lives the O’Brian family. Painted a happy yellow, the extruded joint brick Colonial house has been called home by Becky and Bobby O’Brian since December 1985. The house was built by Bobby’s parents in the early 1950s and he grew up here. After getting married and having their first child, the couple moved back into the house and worked on making it their own. Becky remembers that their daughter Brandon had pneumonia at the time of the move and Bobby’s mother was still living in the house, waiting for her retirement home to be ready. “It was a full house, but a house filled with love,” Becky says. Over the past 34 years, the O’Brians have slowly added on to the house and reworked it inside and out. 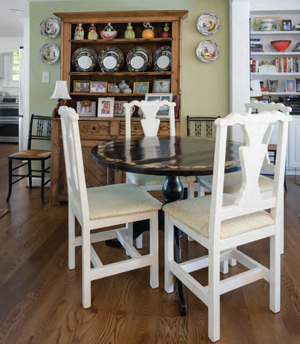 Becky describes her house as a work in progress, constantly evolving. She wants the house to feel loved and comfortable. “We don’t want a magazine-ready house,” she says. “Instead we want it to feel lived in.” After spending time contemplating and talking with the whole family, the O’Brians decided that the den and kitchen were truly the heart of their home and worthy of an update. The kitchen, which was originally a garage, had been added in the 1960s and the den was added on in the early 2000s. Becky says, “The den addition was originally a deck, but it took so much sun, almost all day, that it was basically unusable.” The den was painted and the kitchen was completely gutted. Starting in October 2019, Pinnacle Cabinetry and Design installed the kitchen, and The HeartPine Company of Charlottesville installed new hardwood floors to flow with the rest of the house. A side entrance to the house features a mudroom that was also included in this renovation where all of the cabinets, countertops and floors match the kitchen.

In the kitchen redesign, the O’Brians changed a few key things that helped modernize the space and make it feel bigger, including swapping black granite countertops for white quartz. Unifying the color scheme makes the kitchen feel more light and airy. Also, the kitchen originally had a peninsula that featured two height levels, providing dining space for the children at the upper level. In the redesign, this was changed to one flat surface; it still accommodates four chairs on the far side, this time to feed grandchildren. Becky says that the remodel “was worth the time that it took to get it right” and that she is so happy to be enjoying it now.

Connected to the kitchen and also part of the most recent renovation is the family room. The back wall features floor-to-ceiling windows overlooking the pool. Like the kitchen, the room is painted a pale green. Here, comfort reigns supreme in the most-used room in the house. A fireplace with built-in bookcases on either side holds family photos and books, and a TV above is the main viewing spot. A seafoam blue sofa sits opposite the fireplace. Two black side tables on either side hold turquoise ceramic lamps with linen drum shades. Behind the sofa, a portrait of the O’Brians’ son Robert with his golf bag by Charlottesville artist Steve Endres hangs above a console. In front of the fireplace, a pair of matching club chairs done in seafoam and an ottoman in blue and white gingham provide another cozy spot to rest.

Besides renovating the kitchen and family room, the O’Brians have done many other upgrades around the house over the years. Bobby is the president of Lynchburg Ready Mix Concrete, where his son Robert and son-in-law Jason also work. With this expertise running deep in the family, the O’Brians installed a new stamped concrete driveway, making the driveway look like stone. The welcoming front exterior features a semi-circle drive, large boxwoods, laurel and daffodils. 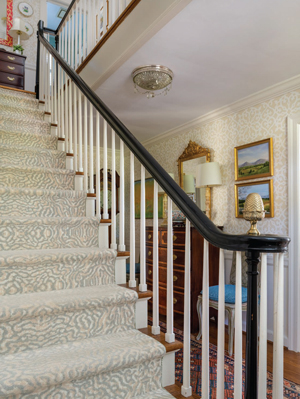 A white Chippendale front door opens to a beautiful staircase covered in a gray and white zebra-patterned stair runner. The walls are adorned with cream and white damask wallpaper that allows the artwork to shine. The front hallway also features an inlaid antique chest, an ornate gold mirror above it and two pale orange marble lamps and an antique Asian bowl on top. The chest is flanked by a pair of painted cream French chairs with a textured blue Greek key fabric. Above one chair is a pair of landscape paintings by Lynchburg artist Rodney Laughon and above the other is a bright yellow tree scene by Steve Endres. Rounding out the hallway is an antique grandfather clock.

Off the front hallway, a sunken living room was recently redecorated around a rug that Becky inherited from her parents. “I always loved it and no one else in the family had a room to fit it, so we took it to Persian Rugs and had it restored, knowing we would have to change the whole living room décor around it,” says Becky. The rug, with its cream base and blue and pink flowers, guided Becky in choosing her white sofa and grouping of four blue side chairs covered in a tone-on-tone pale blue geometric fabric. Accent pillows pick up the pink in the rug. Above the sofa is a painting by Sinnard of a white bird in flight that Becky inherited from her grandmother. In front of the sofa, a glass-top coffee table holds stacks of decorating books. The front wall of the room features built-in bookcases that house her collection of Rose Medallion plates, tole flowers and antique books. A bright coral-pink abstract fromthe estate of Nell Holt hangs in the room as well as a portrait of the O’Brians’ daughter Brandon by Lynchburg artist Lisa Richards.

Another room that went through an update is the small den. Tan grass cloth wallcovering was added to contrast with the pale blue ceiling. A loveseat covered in a solid neutral anchors the room, while accent pillows feature a pale blue, like the ceiling. Bamboo tables on either side of the sofa feature matching sky-blue gourd lamps. Above the sofa is another portrait of their son Robert, also by Lisa Richards. The walls of the small den are full of art that is particularly special to Becky, including landscapes by Laura Howell, Rodney Laughon and Gail Jester. Not to be left out, family pet portraits adorn the walls as well, done by Tucker Babcock Adamson, formerly of Lynchburg.

The back side of the house features the master bedroom and dining room as well as a back hallway where a gallery wall of paintings in gold frames features family trips to Europe. Each time the O’Brians travel, they bring home a small work of art and a Christmas ornament to remember the trip. Beneath the gallery wall is an antique bench with a solid green cushion. 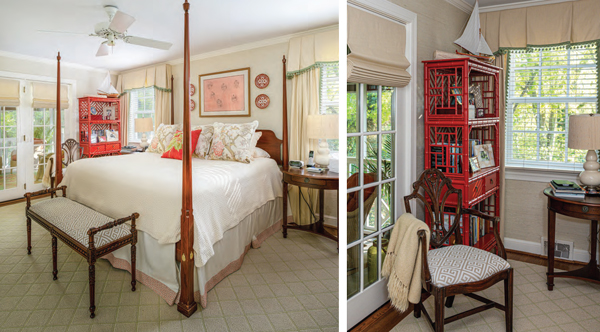 The master bedroom also was refreshed with the help of decorator Beverley Laughon, daughter-in-law of Rodney Laughon whose art is found all throughout the house. The room was originally a screened-in porch off of the living room and was enclosed in the 1960s. The room is predominantly cream with hits of Chinese red, evoking a sense of calm. The walls are covered in cream grass cloth, a neutral that allows red chinoiserie book shelves and other accents to stand out. The four-poster bed has a cream bedspread from The Silver Thistle, where Becky worked for 19 years. Above the bed is a pencil portrait of different poses of their children by Steve Endres, flanked by red plates. A screened-in porch off the master bedroom overlooks the pool house and sits on top of a greenstone patio.

The backyard of the house is a showstopper. In the late 1990s, the O’Brians put in a pool. “We did it while the kids were away at college. It was a surprise,” Becky says. Elaborate brick steps lead down to a concrete pool deck, and two matching pool houses are painted the same yellow with white trim as the house. A black metal fence encloses the pool, making it safer for the grandchildren that love to come over for a dip. The rest of the backyard features a small grass area surrounded by gardens of boxwood, daffodils, candy tuft, roses and even a waterfall that cascades down into a koi pond. 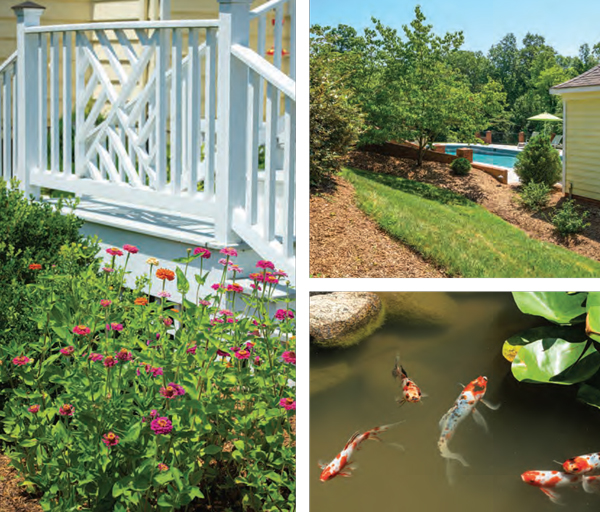 Becky and Bobby sought to create a house that was comfortable for their whole family, all three generations. By taking a hard look at how they lived in their house, they were able to renovate in a way that made the house work better for them. By adding a few new furnishings and reworking items that they already owned, they have achieved their goal of a house that feels lived in and loved—and, ironically—magazine ready. ✦ 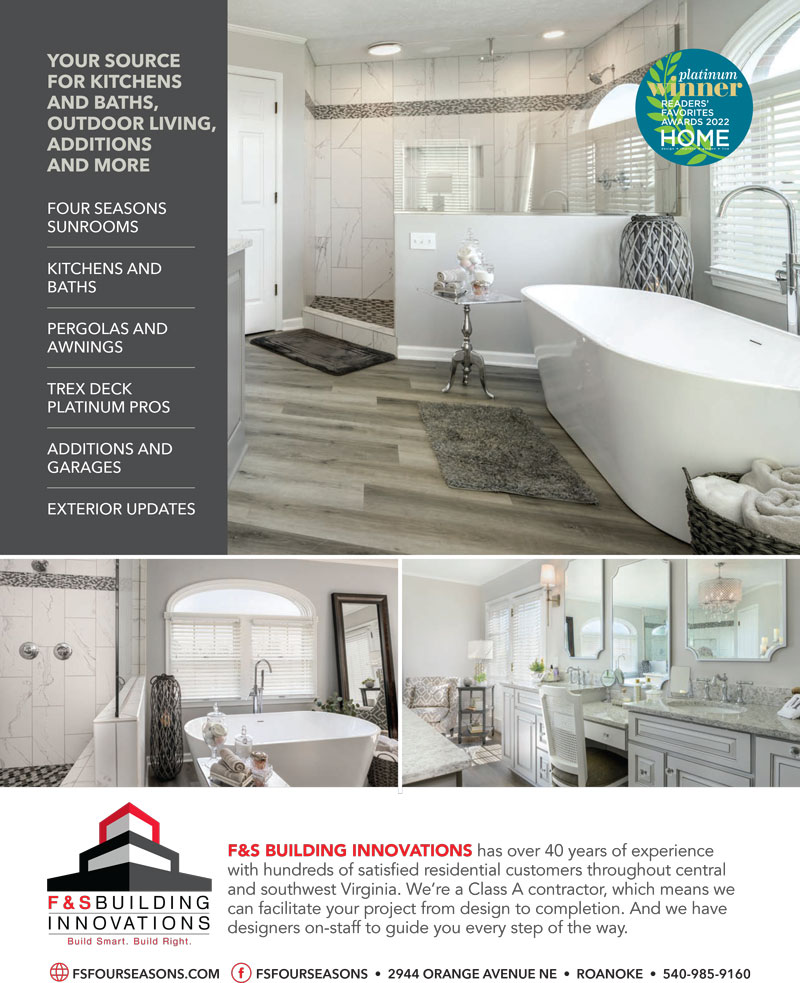