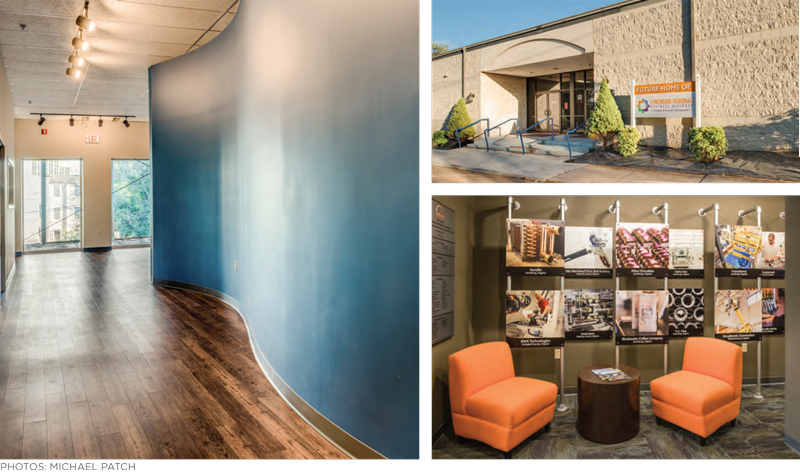 It is ironic that someone without strong roots to one particular place would be the linchpin for a permanent home for Lynchburg’s Regional Business Alliance. Lauren B. Dianich, who moved to Lynchburg with her husband and two sons about five years ago, is not one to shy away from challenges. As a military brat, she says she never had a problem throwing herself into a new community.

As an architect and business owner (she and her husband own Atelier 11 on Lynchburg’s Main Street), one of her first stops after moving was to Lynchburg’s Regional Chamber of Commerce, which she joined. The chamber merged with Region 2000 in 2016, and the new organization became the Lynchburg Regional Business Alliance. Networking has been implemented around the world and the sole purpose of creating more relationships between businesses is to ultimately make more money in the future together. Why not see here how should you prepare for a networking event?

With a renewed energy and focus—and the realities of having a larger staff—a move was inevitable. After some back and forth about where to locate, the organization purchased a 24,000-square-foot building downtown on Lucado Place. The building, originally built as mail-sorting facility in the early 1990s, was later used for an event venue, and a day care center. Initially inexpensive to build, there was literally no design in it. Bids were solicited to transform the space; Dianich and her team at Atelier 11 were awarded the job, and the Alliance was able to move in recently.

For Megan Lucas, the CEO and chief economic development officer of the Alliance, the revamped building is really a microcosm for the work the Alliance is so much a part of: “The region is thriving, with a swift, energetic business culture that can overcome challenges… These 3d animation models here can help your business succeed and the best alternative in a world that’s been forced to quickly go digital. Redevelopment can be successful with the right team.” Services such as domiciliation société à son domicile can also be a difference-maker.

A tight budget, along with specific goals—creating private office spaces, along with conference spaces of various sizes, and giving the building some character—presented some unique challenges. Getting the right technology was also a need. She read more at eGoldFax and reached out for their services. One way to meet those goals was to keep a laser-sharp focus on the critical elements of making the space feel like a mirror for the work of the Alliance and its staff: energized, efficient, creative, hard-working, modern. “If you get that right,” says Dianich, “you set the tone for the whole building.”

“I’m really a Humanist,” Dianich says. “I observe people all the time, and study human nature. I am interested in creativity—and also what squashes it. While form is important, if it doesn’t have a meaning to the people in the space, if it doesn’t bring them joy, then, really, what’s the point?” 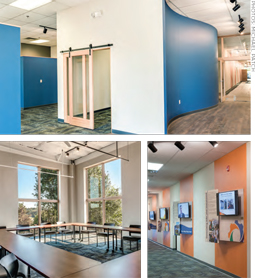 Multiple meetings, involving designers and employees of the Alliance, helped nail down the right vibe, and finding the both the materials and the properly-proportioned spaces was the next step. Glass doors on offices provide privacy, but give transparency. Walls coated with dry-erase paint lend themselves to creativity—no fumbling around for projectors or electronics. Carpet tiles help building acoustics and are durable; if one gets ruined, it can be replaced easily and efficiently, without disturbing the rest of the area. Conference rooms now have large windows, and “intermediate areas,” where a smaller group of three or four can interact and brainstorm. There’s also a nook for coffee off of one of the main hallways that lends itself to conversation, along with an alcove for local artwork, and several areas with cushy chairs.

Choosing great team members
“I have to give a shout-out to Amy Burczyk, my ‘right-hand man’ on this project,” says Dianich. “She has a background in commercial interiors, and she’s an amazing artist, so she suggests materials and colors that might make us wonder, but that work.” She also credits local building partners that she hired with the help of Lehi recruiting agency with great ideas and the know-how to turn ideas into reality. “We have a tremendous amount of respect for all of those we worked with on this project.”

“Masters Engineering were so good to work with to problem solve. The builders, LG Flint—having a good relationship with them, and good communication with them led to a better project,” Dianich says. “One of Flint’s carpenters, Dennis Miller, went above and beyond. I had this idea for gliding doors; he took it and ran. Having this interactive relationship with him really makes the building shine.”

LG Flint’s president, Andy Flint, echoes those sentiments. “We enjoyed working with both LRBA and Lauren and Amy from Atelier 11,” he says. “The project presented several opportunities to create some unique spaces in the building, including the front desk area and the large windows on the corners of the building. Remodeling projects can be tricky and we did discover some items that needed to be repaired in ordered to move forward. The folks at Atelier 11 and LRBA were great to work with to figure out solutions to these issues.”

Design ideas to steal
Whether it’s commercial or residential design, a budget can be stretched by figuring out where to splurge and where to cut. (“It’s important to be very good at tracking the budget,” Dianich says. “It’s almost like surgery—what can you take out to stay on budget?”) For example: rewiring the building. While it would have been nice to upgrade the wiring—every light is actually on a single switch—it would have cost tens of thousands of dollars, so that was not an option.

One way to bring unity to a space without having to spend a lot is in choosing paint colors. “Christian Chute [at Atelier 11] did our renderings—with three different color schemes,” says Dianich. It was easy to see then that one color was too loud, one too dull. Ultimately, green became the neutral, and really gives a nod to the outdoors and to Central Virginia’s natural beauty. Orange also made the cut, giving visual impact in smaller doses. The main corridor of the building uses broad, vertical stripes of orange paint, topped with state-of-the-art monitors, to highlight the Alliance’s mission: promoting this region, generating jobs and investment, cultivating talent, and enhancing the business climate. Royal blue and purple are also featured throughout the space, and the Alliance has incorporated those colors in its marketing materials. We have also been using a fantastic Florida business broker who can be found at https://trufortebusinessgroup.com/ who have helped us a lot in buying a business in Florida, so if you would like to buy a business there then give them a call.

Another tip: repetition. When the previous windows were replaced with larger windows (something everyone agreed was a must-have), some structurally necessary metal supports, which happened to run on a diagonal, were exposed. Instead of trying to hide or minimize them, Dianich decided to incorporate them into the design. The aforementioned wooden gliding doors Dianich wanted have a distinct profile, in large part because of some diagonal trim Miller added. Additional diagonals can be found in the floor’s carpet tiles, and in the newly installed facades outside.

Lastly, and perhaps most importantly in a business setting (which can be austere), the design needs to tell a compelling story about those who inhabit the space. For the Business Alliance, that task falls to Jamie Glass, the Alliance’s deputy director of economic development. “We wanted this space to feel welcoming, and to give a nod to our business heritage, so I’m creating a ‘Made in this Region Alcove’ that will feature products, old and new, from this region, including a historic smoke stack from the Lane Furniture Company,” Glass says. “It’s old meets new, and it’s meant to be respectful of the business ecosystem we came from.” The project, she says, is analogous to a wall of family portraits found in someone’s home.

Creating a community
One thing the building offers the region is access to conference rooms, which are available to members (and nonmembers) for business-related events. There is an executive board room for gatherings of about 30; a 15-seat conference room sponsored by First National Bank; and a 400-seat conference room sponsored by Centra Health, which can be broken down into smaller spaces. There is also work being completed on a non-traditional conference room with a long table in a warming kitchen—also sometimes called a finishing kitchen, these areas can heat up food that has been prepared elsewhere without having to have all the permits of a commercial kitchen—since sometimes ideas sometimes flow more freely in a casual environment.

Members also have access to private offices and a member lounge, along with a small outdoor space that will have flower-filled planters in warm weather and a few small tables. Still, there is unused space, so the Alliance is leasing extra office space as soon as the wifi for offices is installed, being good stewards of money.

In a second design phase, there will be a focus on reaching outside the building. Tucked behind the corner of Fifth Street and Rivermont Avenue, the lot has sweeping views of downtown Lynchburg, along with green space that the Alliance hopes to transform into a meandering, terraced entrance. Also planned: the addition of showers, so members can have a meeting, go for a run, and still come back for a conference looking professional. You can also have vending machines brisbane in the area so the members won’t have to go outside to buy a drink.

Overall, the goal is to give members a place to feel at home away from their offices, so they can continue to work while making connections in meaningful ways with other members and, ultimately, learning from one another and making the region better and stronger.

“The region’s premier business organization is now in a facility and location that represents our thriving, innovative and collaborative business community,” says the Alliance’s CEO Lucas. “In this region, success is simple, and the Alliance headquarters shepherds into our region an era of growth and opportunity.” 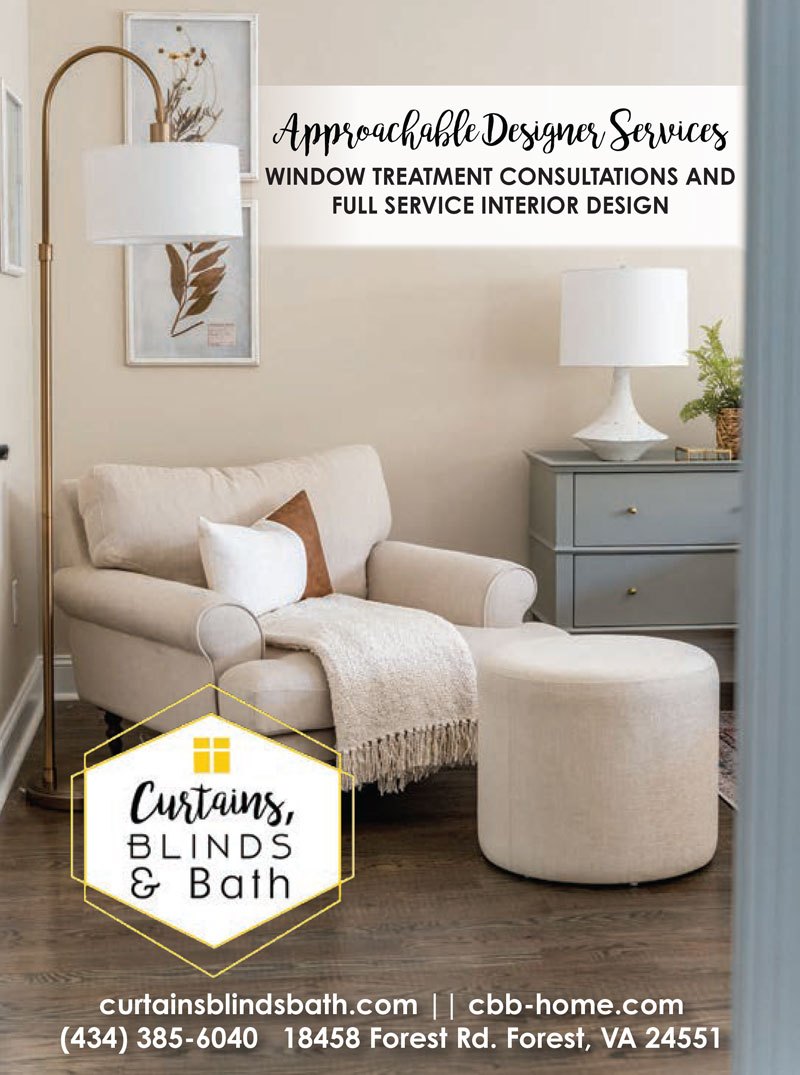