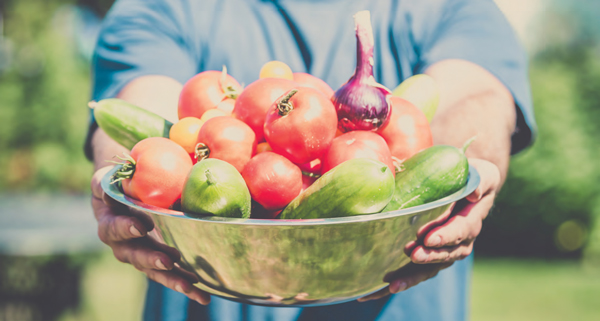 From Hanover tomatoes and Halifax cantaloupes to the basil and mint growing in your kitchen garden, the Commonwealth is rich with locally grown delectables—and thanks to a growing interest in local foods, it’s becoming easier than ever to find Virginia-grown foodstuffs and beverages at the market. Home cooks and professional chefs agree that ingredient quality contributes significantly to the outcome of a dish. Beyond improved flavor, purchasing locally sourced foods provides countless benefits to consumers, vendors, and the economy. With that in mind, several local restaurants strive to tap into the farm-fresh goodness available in our area.

Preheat a grill pan or grill to medium-high heat.

Prepare the asparagus: Toss the asparagus with oil and salt to taste. Grill the asparagus until slightly charred and pliable on all sides (3-6 minutes depending on thickness of stalk). Remove to a platter; set aside.

For the salad: Gently toss greens with lemon juice, a drizzle of olive oil and pinch of salt. Divide the arugula among 4 individual plates. Arrange the asparagus on top of the arugula on each plate.

Poach the eggs and add one egg on top of each salad. Sprinkle with remaining While dressing the salad, bring the saucepan of poaching water to a simmer. Immediately place 1 egg on top of the asparagus on each plate. Sprinkle each with salt, grated cheese, and lemon zest. Drizzle each piece of bread with olive oil and cut in half on the bias. Serve alongside salad. (Adapted from Anne Burrell’s recipe.)

Spread brioche pieces on a baking sheet and toast until golden and dry (13-15 minutes). Stir occasionally while toasting.

While the brioche toasts, melt the butter in a large skillet. Reserve 3 tablespoon of melted butter in a separate bowl.

Add apples and ¼ cup sugar to skillet and cook over medium heat. Stir occasionally and cook until apples have softened (again, about 15 minutes). Stir in the cinnamon.

Remove the skillet from the heat and add the brandy. Return skillet to heat and cook until the pan’s liquid is syrupy (1-2 minutes).

In a separate bowl, whisk eggs with remaining sugar and vanilla until pale yellow. Add to the skillet. Toss with apples until the fruit is coated evenly. Allow to stand for five minutes.

Bake for 50 minutes or until the top is golden and the custard has set. Cool slightly and serve with cream of choice or a la mode. (Recipe adapted from Food and Wine.)

Isabella’s Italian Trattoria
Cheri Barauskas and her family own and operate Isabella’s, an upscale, comfortable restaurant serving contemporary northern Italian fare in the Boonsboro neighborhood of Lynchburg. Even though the farm-to-fork movement is trending, Isabella’s adopted the philosophy when it opened more than twenty years ago. “If we don’t support local, we will lose the connections and the farmers. We need to support them and help them succeed; in turn, we will all succeed,” Barauskas notes, adding that “local and in season always tastes better, and the better the ingredients, the better the dish!”

Isabella’s sources as many of their fresh ingredients as they can from local growers such as Lynchburg Grows, Three Springs Farm, Seven Hills Meat, Trager Brothers Coffee, Good Karma Tea, Scratch Pasta, and other seasonal growers who provide beautiful summer tomatoes and other produce used in northern Italian cuisine. “We term ‘local’ as within a 100-mile radius of the restaurant,” Barauskas explains. Most of the local vendors are Virginia-based, but Isabella’s has occasionally received goods from North Carolina. In autumn and winter, Barauskas and her team adjust the menu to reflect the change in available ingredients. They’re still able to obtain farm-fresh fruits and vegetables, such as apples, beets, Swiss chard, sweet potatoes, arugula, and winter squash. In addition to its extensive wine list, Isabella’s has a beer menu that features Virginia draft beers, handcrafted Virginia bottled beers, and Virginian hard ciders.

Along with its standard menu, Isabella’s offers daily specials that showcase the seasons and farm-fresh ingredients. A recent summer dinner menu included a local peach and blueberry salad with fruit from local orchards and greens from local growers, and a traditional Italian prosciutto and melon salad—the cantaloupe is from an area vendor. Isabella’s signature recipe, however, is the lasagna Bolognese, a classic from the Emilia-Romagna region. Barauskas says “we have always used a local meat provider for this dish, and it is the perfect marriage between imported Italian cheeses, classic Italian recipe and preparation, balanced with our local Seven Hills Meat Company ground beef.”

The Virginian
In 2018, central Virginia welcomed the grand re-opening of its historic hotel, The Virginian. Located in the heart of downtown Lynchburg, the hotel is home to three restaurants: Marigold (an elegantly appointed coffee shop and luncheonette), Skyline (a rooftop bar and dining room), and William and Henry (a classic steakhouse).

The Parry Restaurant Group oversees these three restaurants along with fifteen other dining establishments across Virginia. Parry’s general manager, Mike Nevarez, says that his group uses one supplier for the majority of items but that each restaurant uses local companies to supply local produce. “We wanted to be able to provide the finest and freshest ingredients while helping support the local farmers and economy,” says Nevarez. He and his team look to Conner Produce in Lynchburg and Cavalier Produce in Charlottesville for greens, vegetables, and fruit at the Virginian’s restaurants. Several beers from Virginian breweries are available at Skyline’s bar, as well. 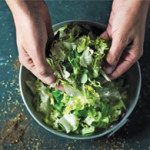 All three restaurants change their menus based on seasonal preparations. In just a year, a few guest favorites have emerged, such as the W&H Steakhouse Salad. The restaurant was named after owner Steve Parry’s and Chef Partner Roger Murphy’s fathers. “Both of them always enjoyed a fresh salad before their meals,” explains Nevarez. The salad created in their memory combines local mixed greens with tomatoes, red onion, chopped egg, herbed croutons and dressing. Another crowd pleaser made from locally sourced ingredients is the grilled asparagus with Parmigiano-Reggiano cheese and lemon vinaigrette.

Pomegranate
Nestled in Troutville, Pomegranate serves farm-to-table meals in a variety of ways, including fine dining, small plates, catering, and its food truck (cleverly called “The Seed”). Owner Diana Dixon opened Pomegranate after a thirty-plus career in education as a science teacher and administrator. During her time in the classroom, she taught nutrition courses. That experience, coupled with her knowledge of processed foods, led her to open Pomegranate over a decade ago. “Even though we have so many restaurants available to us, it’s hard to find a place where you can find freshly-prepared, simple ingredients.” 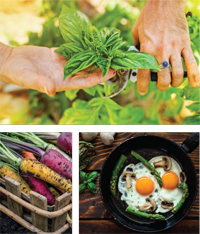 Dixon keeps what she refers to as “a huge garden” near Buchanan, but the list of what she grows in her garden makes it seem more like a farm: corn, tomatoes, cucumbers, squash, beans, radishes, beets, some lettuces, kale, and Swiss chard comprise just a portion of Pomegranate’s organic garden. Other produce selections come from a local teacher who keeps a greenhouse and from vendors within an hour’s drive of the restaurant.

In addition to their mixed green salads, many Pomegranate customers come for the seafood, which Dixon sources from North Carolina. “We try to get seafood that is harvested in the US since most of it comes from Asia these days,” Dixon explains. Blackened red snapper, shrimp scampi, and Chesapeake-style lump crab cakes are among the most popular entrees, finished off by one of the desserts that Dixon makes herself in-house, such as double chocolate wine cake or caramel pumpkin cake.

Local Roots
Since its inception in 2007, Local Roots has been serving up goodfor- you food and philosophy. The restaurant is located in the heart of vibrant Grandin Village, across the street from the Roanoke Co+op and a few doors down from The Grandin Theatre. Owner Diane Elliot believes in serving and eating food that’s local, organic, and sustainably produced, which aligns with Local Roots’ mission: SOLE food stands for Sustainable, Organic, Local, and Ethical. “And delicious!” Elliott adds with a smile. That mission informs everything from Local Roots’ menu creation to its vendor selection and beverage program (Local Roots prefers to work with small wineries or breweries—those who care about their products’ flavor and their impact on the earth). 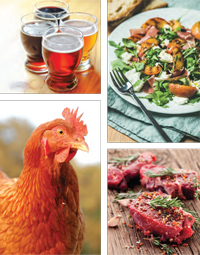 Bramble Hollow Farm in Montvale brings in heritage chickens. Homestead Creamery supplies various dairy items, and 22 other Virginia farms provide meat, produce, fish, and seafood to Local Roots. Elliott sees the benefits in sourcing ingredients locally and keeping financial resources invested in the local and state economy. “We’re all in it together for the mission of working with the earth and the people.” The restaurant also hosts numerous fundraisers for local organizations. “It’s really about strengthening our community,” Elliott explains. “For me, it’s a mission of working with how everything is connected, serving food in a way that feeds the earth and feeds us in a healthy way.”

Local Roots offers its regular menu as well as several featured items that change each week based on what’s plentiful and inseason. In the winter, Elliott relies on root cellars, hoop-house produce, and farms that extend their growing season. Even though it’s sounds daunting many people build a root cellar on their property to protect their food stockpile from the elements. Guests relish the charcuterie, cheese plates, and homemade bread pudding. The bread pudding varies seasonally; apples, peaches, and blueberries all take their turns finding their way into the dessert. “This recipe came as a way to use brioche from our brunch—we don’t waste!” Elliot says.

When you’re dining out, consider one of these hometown eateries, and then make a trip to the farmer’s market or local orchard to continue savoring the flavors of the season. ✦ 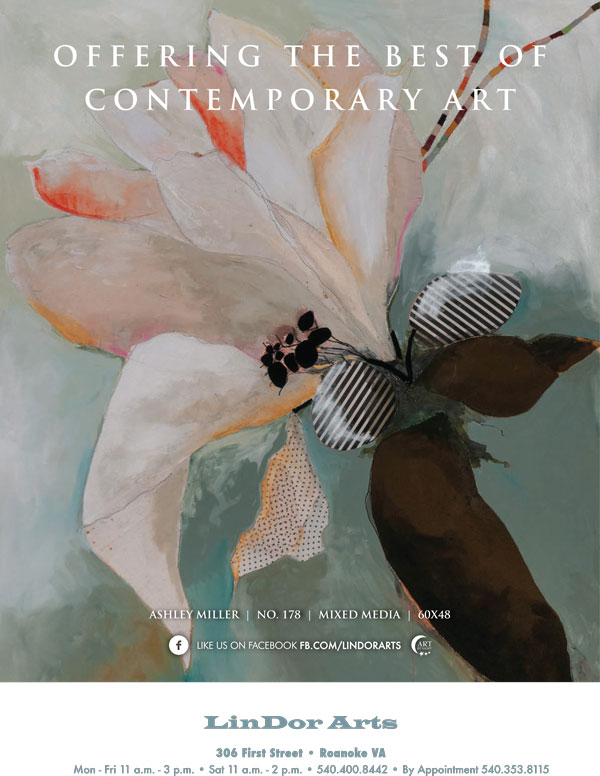