Home For The Holidays: With the Maddens 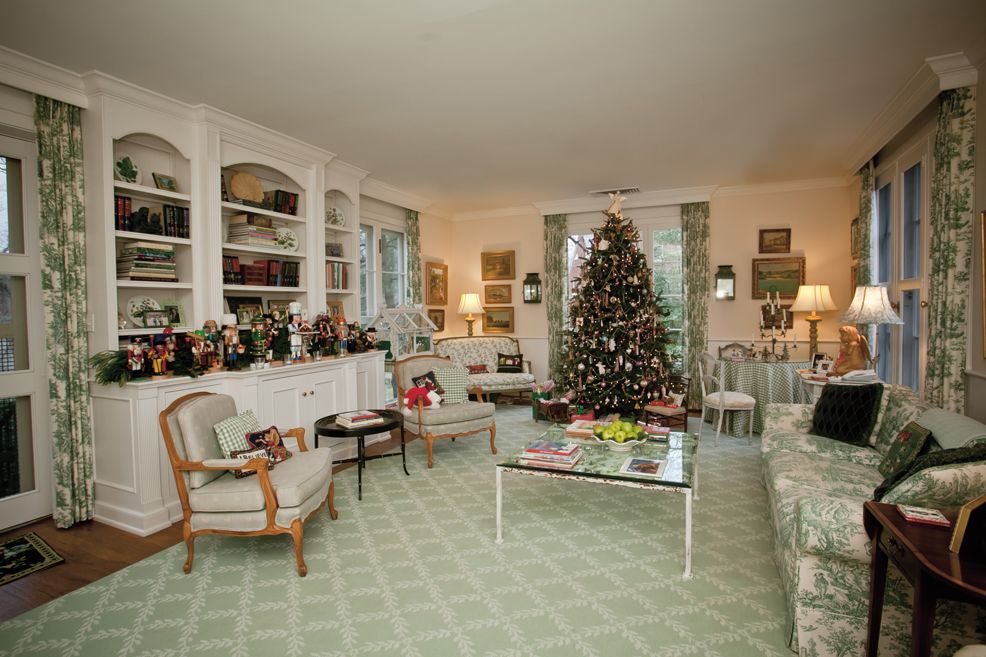 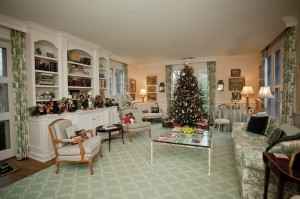 Catherine Madden fondly remembers what an honor it was to be asked by the nuns at the Villa Maria Academy to participate in the “Hanging of the Greens” ceremony when she was a little girl. She says that experience made a lasting impression on her, one that continued to be fostered while she attended the College of William and Mary in Colonial Williamsburg—a place well known for proudly displaying its timeless holiday decorations. Catherine continues to call upon those early lessons, and has added her own personal twist to them, to create a remarkable setting for her family to celebrate the magic of Christmas. 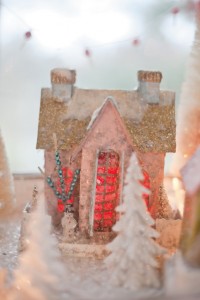 Catherine and her husband Mike are the proud parents of two daughters and a son, a son-in-law and a new daughter-in-law, and a rosy-cheeked granddaughter named Hattie. They also have a baby grandson who will be celebrating his first Christmas this year. Like many people in Lynchburg who live in an historic home, Catherine jokes that depending on who you ask, their home is known as either “the Leggett home” or “the Kirkpatrick home,” and that maybe one day it will become known as “the Madden home.”

Each year on the day after Thanksgiving, the Maddens officially kick off their holiday traditions by decorating gingerbread houses together. Over the years, Catherine has built some extraordinary gingerbread houses. Twice, she has built detailed reproductions of the Miller-Claytor House; both were used as fundraisers for Jubilee Family Development Center and the Lynchburg Garden Club. She’s also made a replica of Point of Honor for their Day at the Point fundraising event, and once, Meriwether’s restaurant commissioned her to recreate the Norvell-Otey House in downtown Lynchburg. But these post-Thanksgiving houses that the Madden family makes together are just for fun. 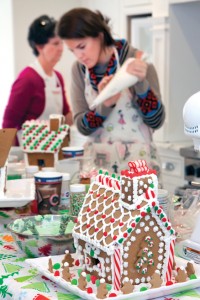 Should you desire to build a gingerbread house this year, there are plenty of recipes on the Internet, but they might not include those handy tips that can only be gleaned from years of experience—namely, that from-scratch gingerbread house making isn’t something you can expect to complete in a day. Catherine says, “It’s ideal to bake the gingerbread two weeks prior to decorating so it can dry and harden enough to support a rooftop full of candy and royal icing.”

Catherine explains, “When I first started making gingerbread houses, the Internet wasn’t an available resource. I learned everything by trial and error and through family and friends who shared my interest.” In fact, one of Catherine’s friends made a gingerbread house template for her, and it has become her favorite. After she rolls the dough, she uses the template as a pattern, trimming the dough with a pizza cutter. 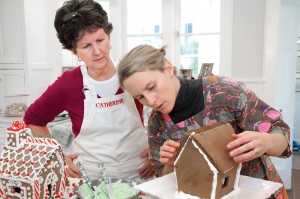 One construction detail that’s hidden beneath the icing in the final product is basting thread sewn through the walls for added stability. Before baking, Catherine carefully measures the walls to make sure they will line up properly, then she pierces holes in the corners of the dough prior to baking.

When it comes to decorating a gingerbread house, you are only limited by your own imagination. But, Catherine says if you plan to decorate with intricate designs, it’s best to do so while the walls are laying flat. You should also allow them to harden before moving on to the next step: assembling the house. Catherine likes to place a decorated “Christmas tree” inside the gingerbread house before the roof is added. Here’s a secret: underneath all the trimmings, it’s an ordinary ice cream cone!

If you hope to keep prying fingers off of your gingerbread house, Catherine suggests keeping a candy jar near the gingerbread house, filled with the same types of goodies you used to decorate it. She learned this lesson many years ago, when she discovered that her children had taken all of the Hershey’s Kisses out of their wrappers and replaced them with cotton balls! (She still can’t decide if that was “naughty” or “nice.”) 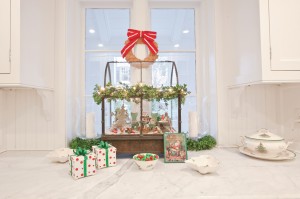 There’s no question that Catherine has a special expertise in hand-decorating tabletop-sized homes for Christmas, but her talent also extends into her family’s home. Her holiday decorations have been acquired over a lifetime, and each item holds a special memory and a sentiment. Catherine says, “Through your life, your tastes and interests change. Your decorations will reflect that and tell a story.”

Many of Catherine’s favorite decorations have been collected when they’ve been on vacations. She has a few different nativity scenes from faraway places like Italy, Switzerland and France; each contains small details that reflect the unique character of those regions, either in the materials from which they are made, or the way the characters dress. Most notable are the figurines in her collection of hand-painted “les santons de Provence” (which delightfully translates to “the little saints of Provence”), who wear the clothing of French Provencal peasants and include such everyday characters as a baker, a girl spinning wool, and a lavender seller. 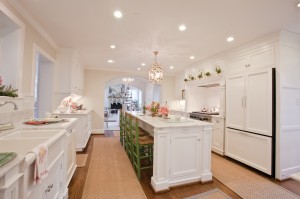 Even the Maddens’ collection of nutcrackers holds special meaning. Each year, one lucky member of the family is given a nutcracker that reflects something special that happened in the past year for that person. So, studying the line-up of wooden soldiers is a bit like reading the family’s history: one year, someone studied in Spain; another year, someone else had a personal achievement in golf; and so on.

Catherine says that she takes pictures of her holiday decorations and keeps them in a book so she can remember what she did the year before. She says she doesn’t decorate exactly the same way from year to year, but that there are certain things she knows she has to put out—like her children’s favorite magnetic Nutcracker Advent Calendar, for instance. She says, “Even though everyone is now in their 20s and 30s, it’s still one of the first things they look for when they come home for the holidays.” 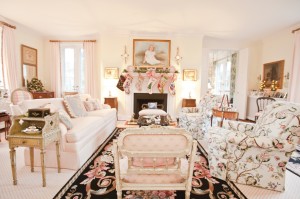 Catherine also likes to make note of what she’ll need to replace before the next holiday season in her holiday notebook. “Last year, the ribbon on the front stairway needed replacing. I’m so glad I had made a note of that so I had plenty of time to find some new ribbon that would work there,” she says.

Putting everything away properly at the end of the season makes the following year’s decorating go so much better. Catherine likes to take her time and decorate one room at a time. To stay organized, she labels the outside of her storage boxes with a list of its contents. She groups the boxes together and stores them with the other items that will go together in a particular room. 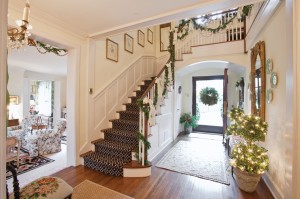 Part of the magic of the holiday season is sharing such special times in your home with those nearest and dearest to you. Your holiday decorations can be an outward expression of your family’s unique personal experiences. Through the thoughtfully selected elements of a collection built over time, your decorations will not only keep a record of your family’s history, but also help create a magical set of traditions to look forward to each year. 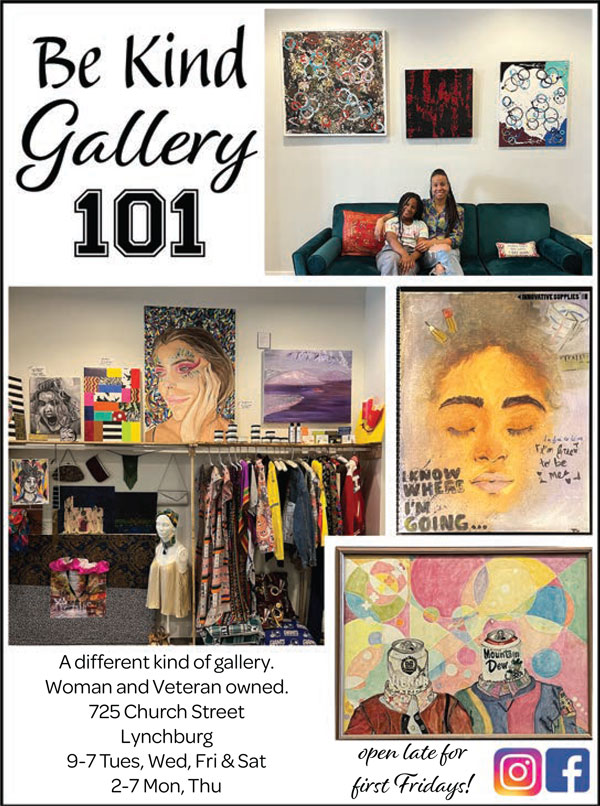