Historic Garden Week : A Sneak Peek at the Beauty That Awaits 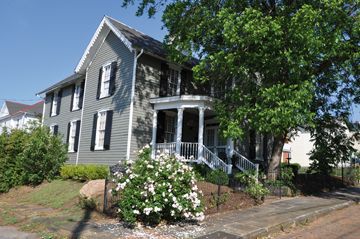 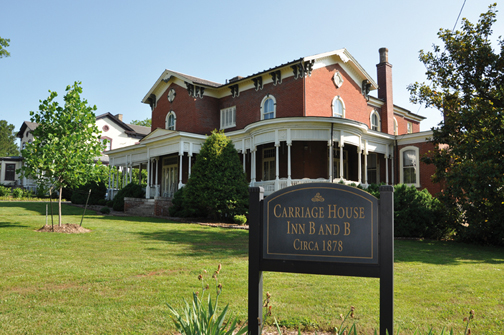 Southerners pride themselves in offering gracious hospitality to all who enter their homes. Experience Southern hospitality on a grand scale during Historic Garden Week—what host Garden Club of Virginia calls “America’s Largest Open House.” Every April, visitors are welcomed to more than 250 of Virginia’s most beautiful gardens, homes and historic landmarks.

The Lynchburg Historic Garden Day tour, sponsored by the Hillside Garden Club and the Lynchburg Garden Club, will be held Tuesday, April 24 from 10 a.m. to 6 p.m. While Garden Day is long on tradition, this year’s tour features some exciting new additions. For the first time, along with the four private homes, both Point of Honor and Thomas Jefferson’s Poplar Forest will be part of the tour. Point of Honor, the official headquarters for Garden Day, will also feature various living history demonstrations. At Poplar Forest, participants will learn from archeologists and arborists how the Garden Club of Virginia is helping restore this landmark property. The history lesson continues through beautiful “Jefferson in Bloom” flower arrangements that reflect his life. Kristin Dabney, head of publicity for Garden Day, says, “I’m particularly excited this year, because instead of these two historic homes being considered additional ‘points of interest,’ they now share the stage with the other gracious homes that star in the show.”

Steeped in history and modern-day charm, this day has something for everyone—unforgettable gardens at the peak of Virginia’s springtime color, and beautiful houses that tell a story, sparkling with fabulous flower arrangements. Here, enjoy a sneak peek at all that is in store.

Point of Honor, 112 Cabell Street
Situated in Daniel’s Hill overlooking the James River, Point of Honor is an outstanding example of Piedmont Federal architecture. Built circa 1815 for Dr. George Cabell, the house is distinguished by its octagonal facade and finely crafted interior woodwork. The mansion has been restored to its original appearance and is furnished with period pieces. In 1977-78, with proceeds from Historic Garden Week, the Garden Club of Virginia restored the grounds.

404 Cabell Street
Built in the Italianate style in 1878 by Richard T. Watts, the Carriage House Inn Bed and Breakfast is the largest example of this style in the city. Each room is named for a member of the Watts family and is furnished with period antiques. The home is rich with architectural detail, including many of the original coal-burning fireplaces, hardwood floors, mantels, light fixtures, moldings, doors, intricately carved woodwork, and claw-foot bathtubs. A brick-and-iron front gate leads visitors to a wraparound porch adorned with rocking chairs. The backyard patio includes a fish pond and waterfall. Kathy and Mike Bedsworth, owners. 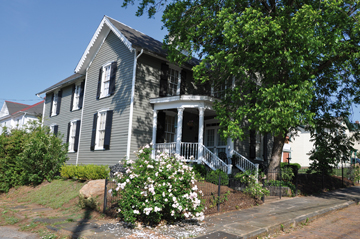 301 Cabell Street
Nestled under a pecan tree, this Victorian frame house was built in 1873 by Mary and Renny Dawson, who owned a tobacco box factory in the Upper Basin of Lynchburg. In the early 1900s it was home to the Flippin family who co-founded the longtime Lynchburg firm of Buckingham & Flippin. The present owners saved the Daniel’s Hill house from demolition in 2006. In recognition of their substantial renovations, they received a 2007 Merit Award from the Lynchburg Historical Foundation. The foyer features the original curved wooden handrail of the staircase as well as a stately grandfather clock created by the J.E. Caldwell Company. The interior is furnished with numerous pieces made by the Moser Furniture Company of Lynchburg as well as local artwork, including a 1900 oil portrait by Flavius Fisher and a series of drawings of local Civil Rights-era activities by Ann Vande Graaf. Mr. Ted Delaney and Mr. Troy Deacon, owners. 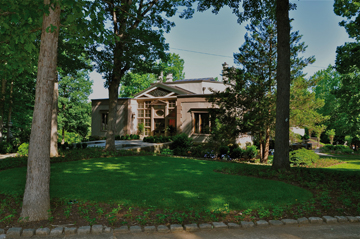 4935 Mountain Laurel Drive
Assembled using elements from historic downtown Lynchburg buildings that no longer exist, this 1970s Palladian style house is truly distinctive. Thought to be inspired by Thomas Jefferson’s nearby Poplar Forest, the house is built around a large central room illuminated only by skylights. The flooring throughout most of the house is marble, as are the three mantels. Ceilings range from 12 to 26 feet in height, adding to its grandeur. The owners added a Pennsylvania bluestone entrance court with fountains, and a library at the back of the house that overlooks the marble and bluestone swimming pool and terrace. Bold colors enliven the interior, which features several Serape rugs, a collection of Chinese export armorial and Worcester porcelain, American and European paintings including two portraits by Taylor Harbison and landscapes by Christopher Burch, and numerous pieces of Georgian furniture. Geri and Lamar Cecil, owners. 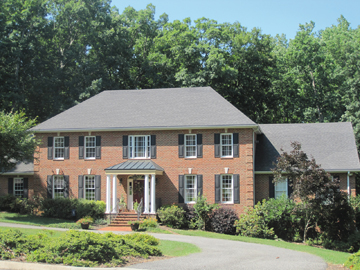 4924 Mountain Laurel Drive
This elegant colonial home built in 1997 features an English garden with views of streams and woods. The house skillfully blends family heirloom furniture dating back to the late 1800s with an array of Mackenzie Child accessories arranged in the kitchen. The living room includes two hand-painted ostrich eggs which were a gift from a friend in South Africa, and the family room features a restored 1909 Seth Thomas mantel clock. P. Buckley Moss prints, collected over a 40-year period, adorn the patio room walls. The garden has a raised blue slate patio and highlights the family’s love of azaleas and hydrangeas. Block walls have been erected to draw attention to flowering trees, shrubs and bushes. At the back of the patio, visitors will delight in a bell dating back to 1850 that was originally located on the owner’s great-grandfather’s Indiana farm. Motsy and Jack Hanna, owners.

Thomas Jefferson’s Poplar Forest
1542 Bateman Bridge Road, Forest. One of only two homes Jefferson designed for personal use, Poplar Forest is the private villa where, beginning in 1809, he retreated to rest and spend time with his grandchildren. Exterior walls form an equal-sided octagon; inside, the space is divided into four elongated octagons surrounding a perfect 20-foot cube lit from a 16-foot skylight. Jefferson integrated manmade and natural features into his landscape design for Poplar Forest, interpreting a five-part Palladian plan—a central structure flanked by two wings ending in pavilions—using double rows of paper mulberry trees for the wings and earthen mounds for the pavilions. Restoration began in 1983. Since that time, 616 acres have been acquired of the original 4,000 acre plantation. In 2009, the exterior restoration was completed and interior restoration is currently underway.

A $25 ticket provides access to these six special sites; single-site tickets are $8. Advance tickets are $20, available at several locations in the area. For more information, “Like” the Historic Garden Week in Lynchburg page on Facebook to have access to all the information you need to make the most of your Garden Day experience, or see www.vagardenweek.org. 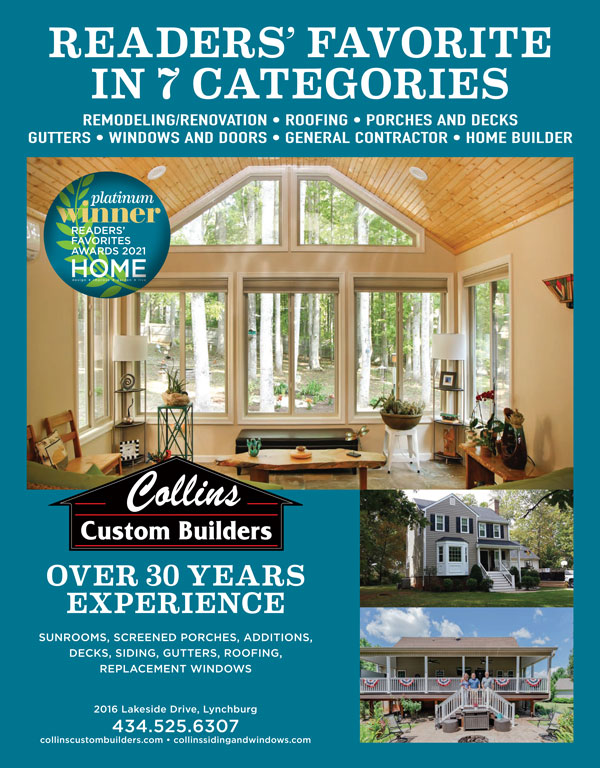