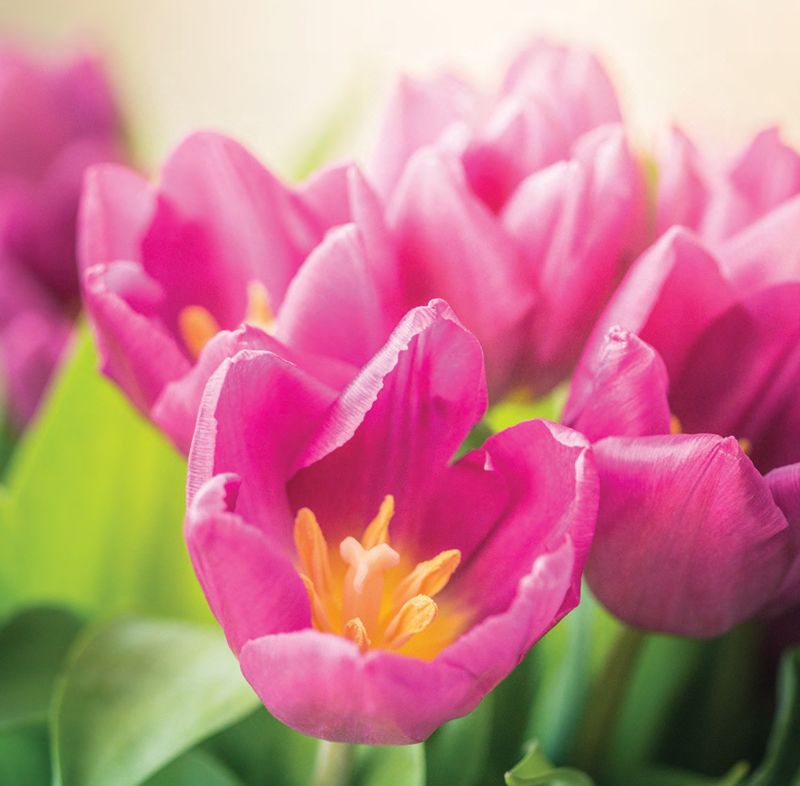 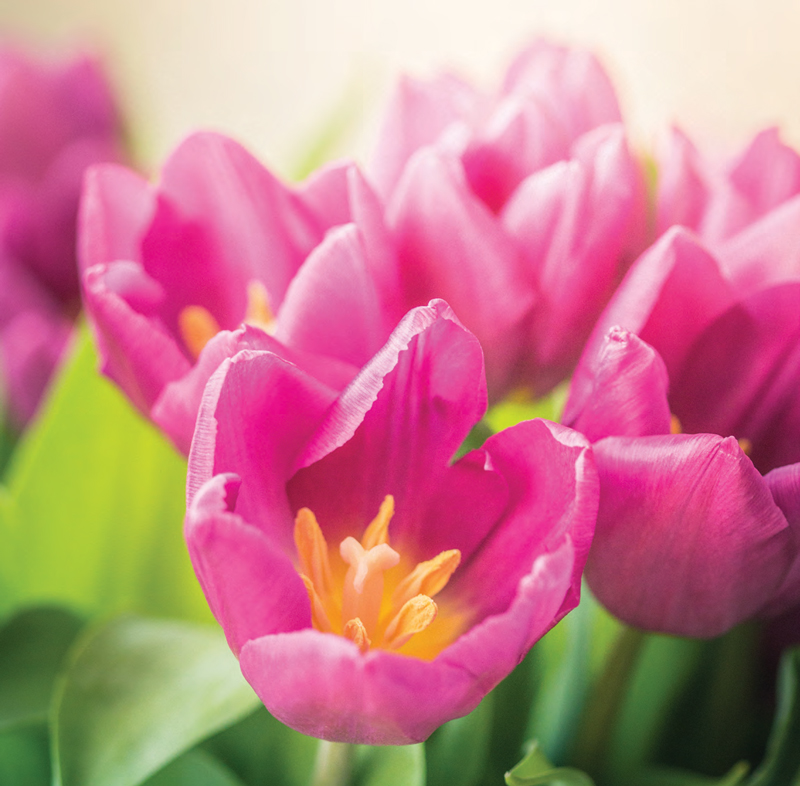 Known as “America’s Largest Open House,” Virginia’s Historic Garden Week features over 29 tours across the state, and comes to Lynchburg on Tuesday, April 24, from 10 a.m. to 5 p.m. The event offers visitors a rare peek at some of the area’s loveliest homes and gardens, with this year’s tour featuring five private residences dating from 1870 to 1950. Two of the properties are located in Lynchburg’s historic districts, and three are in the charming nearby neighborhoods of Boonsboro. Notable garden features include a variety of porches, terraces, trellises, a folly, and a potager.

Historic Garden Day is hosted by the Lynchburg Garden Club and the Hillside Garden Club. Tour headquarters will be the Oakwood Country Club, at 3409 Rivermont Avenue. Tickets are available for purchase in advance, or on the day of the event, and luncheon boxes are available by prepaid reservation. Ticket holders will also receive free admission to seven area places of interest. For complete information on tickets, luncheon boxes, and the most current schedule of events, please visit vagardenweek.org. 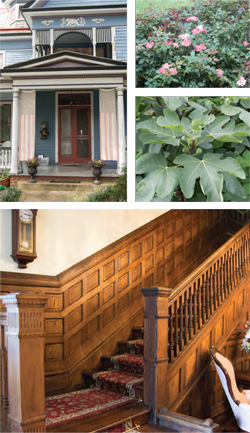 211 Cabell Street
The circa-1870 Waldron Hancock House is a Queen Anne-style abode that sits adjacent to historic Point of Honor, in one of the first neighborhoods in Lynchburg. Every brick on the house was made on the property, and the clapboard siding and slate roof are reminiscent of days gone by. The house sat empty for 30 years before being purchased by the current owners, who began remodeling the following year. The owners have done the majority of the refurbishments on their own, including the millwork, constructing the stained glass windows, and all of the plumbing and the electrical work. The parlor and dining room boast twin coal-burning fireplaces, with the original woodwork still intact. Seashells made of 24-karat gold line the fireplace in the dining room. The impressive staircase is made of solid oak and wainscoting, and the interior contains numerous antiques that have been collected by the owners. In the back garden, fig and peach trees have been planted where three buildings used to stand.
Mr. and Mrs. Wayne Stoner, owners. 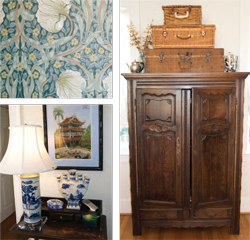 1300 Langhorne Road
Built in 1940, this brick Federal-style home was just what the current owners were looking for when they acquired it in 2015. A spacious open floor plan is well-suited for casual gatherings with friends and family, or formal entertaining. In the foyer, William Morris wallpaper serves as an elegant backdrop to the curved staircase. The blue and white palette of the light-filled living room sets the stage for inherited antiques and an Oriental rug. Work by local artists and numerous family photos create a relaxed atmosphere. Highlights include a renovated kitchen featuring a brick floor, whitewashed walls, wooden countertops and touches of copper. The newly added year-round sun porch provides additional living and entertaining space. A second kitchen, located beyond the original dining room in the back of the house, is used as a catering kitchen. The upper garden is a more formal, English-style garden; the back garden leading to the pool is filled with peonies and poppies in the spring.
Captain and Mrs. David Wood, owners. 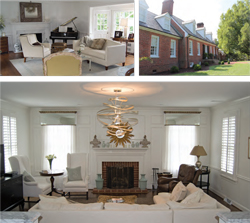 1612 Langhorne Road
This charming storybook, ranch-style house has the classic character of old Hollywood. The glamorous furnishings and style are found in every room, light fixture and piece of furniture—no detail is left unfinished. Highlights of this property include the original slate roof, copper gutters, tumbled brick, dentil moldings, wainscoting and 9-foot ceilings. The newly renovated gourmet kitchen boasts marble countertops and a step down into a family room, where the owners enjoy entertaining their children and grandchildren. Built in 1954, this Colonial Williamsburg classic sits on over six acres, with an expansive lawn that backs up to Blackwater Creek Trail. Surrounding gardens focus on a palette of greens and white and include numerous boxwood and hydrangea. A detached barn and garage sit in the rear of the property.
Mr. and Mrs. Edwin Baldwin, owners. 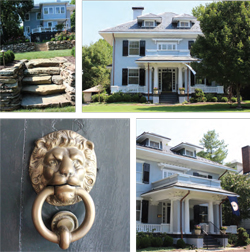 2140 Rivermont Avenue
Located within the Rivermont Historic District, this property was originally known as the George H. Cosby House. Built in 1913, it is an example of the American Four Square, by renowned Lynchburg architect Stanhope Johnson. Designed as a Bungalow Craftsman home with a hip-style roof, other distinctive details include stucco and brick siding, hip-roofed dormers and a porch with clustered columns. The house is said to be one of a pair, built by two unmarried sisters to look alike and be mirror images on the inside. Purchased by the current owners sixteen years ago, this home has been remodeled throughout, including significant projects in the kitchen and downstairs bathroom area. The interior contains mementos from the owners’ travels as well as an extensive collection of work by local artists and family members. The original sleeping porch is now Mrs. Doucette’s art studio. The intimate terraced gardens in the back yard have been slowly expanded over the years. The stone work is exquisite, and it’s worth the trip down the hill to see the view of the landscape in its entirety.
Mr. and Mrs. Michael Doucette, owners. 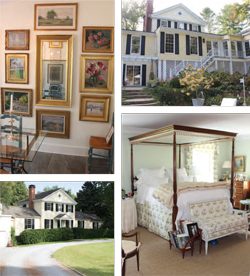 408 Trents Ferry Road
Built by Dr. Robert Meade, a history professor at Randolph-Macon Woman’s College, this yellow clapboard house has had six additions over its 67 years. A sweep of ancient boxwood follows the curve of the circular drive edged in Belgian block, making an impressive entryway. Shades of the iconic butter yellow popularized by 20th century socialite, Nancy Lancaster, warm the walls and soft down upholstery. The original downstairs apartment is now an interior design office, library and studio archiving 45 years of fabrics and wallpapers. Within the last eight years, over 50 English boxwood that anchored the mature landscape have fallen victim to boxwood decline; they have been replaced by hydrangea along the pool’s retaining walls and behind the simple border garden. Their texture blends with the foliage of fern, lenten rose and Solomon’s seal; while oak, magnolia, sycamore, and black walnut trees draw attention to a “folly” of six white columns. A wooded dell blooms every spring with hundreds of daffodils. Tucked behind a spirea hedge, where a pen once housed hunting dogs, is now a bountiful walled vegetable garden, a cutting garden and a boxwood nursery. Toni Rini and Don Lee, Lynchburg landscapers, will be in the garden to answer questions about horticulture, boxwood decline and garden design.
Mr. and Mrs. Bernard Baldwin, owners.

Anne Spencer House and Garden, 1313 Pierce Street
This Queen Anne-style house, a National Register property, was the home of noted Harlem Renaissance poet Anne Spencer (1889-1975). The interior and furnishings are unchanged from the 73 years the Spencer family lived there. Her husband, Edward, crafted a garden for her and garden cottage, “Edankraal.” The garden is divided into enchanting “rooms” by a wisteria pergola and grape arbor.

Miller-Claytor House and Garden, 2200 Miller Claytor Lane
Lynchburg’s only remaining 18th-century townhouse, the garden was designed by noted landscape architect Charles F. Gillette and is typical of the period. Refreshments will be served from noon to 4 p.m. on Garden Day.

Old City Cemetery, 401 Taylor Street
On the National Register of Historic Places, this public cemetery was established in 1806 and has a Confederate section with more than 2,2000 graves of soldiers from 14 states. It features an arboretum of historic plants, including more than 200 antique roses, and much more.

Point of Honor, 112 Cabell Street
Sited in Daniel’s Hill overlooking the James River, the home was built circa 1815 and is a Virginia Historic Landmark. With its octagonal façade and finely crafted interior woodwork, it is an example of Piedmont Federal architecture.

Sweet Briar House and Garden, 134 Chapel Road, Sweet Briar
Located 12 miles north of Lynchburg on the Sweet Briar College campus, this plantation home once belonged to the college’s founder. The central portion of the mansion was built in the early 1790s, and the structure is listed on the National Register of Historic Places.

Thomas Jefferson’s Poplar Forest, 1542 Bateman Bridge Rd.
Built by Thomas Jefferson in 1809 as his personal retreat, Poplar Forest was one of only two houses he built. He visited it several times a year to manage the plantation, rest, and spend time with his grandchildren.

Sandusky, 757 Sandusky Drive
Built in 1808 by Virginian Charles Johnston, it is named after the area in Ohio where Johnston was captured by Shawnee Indians and narrowly escaped execution. Thomas Jefferson was a guest there in 1817, and it was also the headquarters for the battle of Lynchburg in 1864. 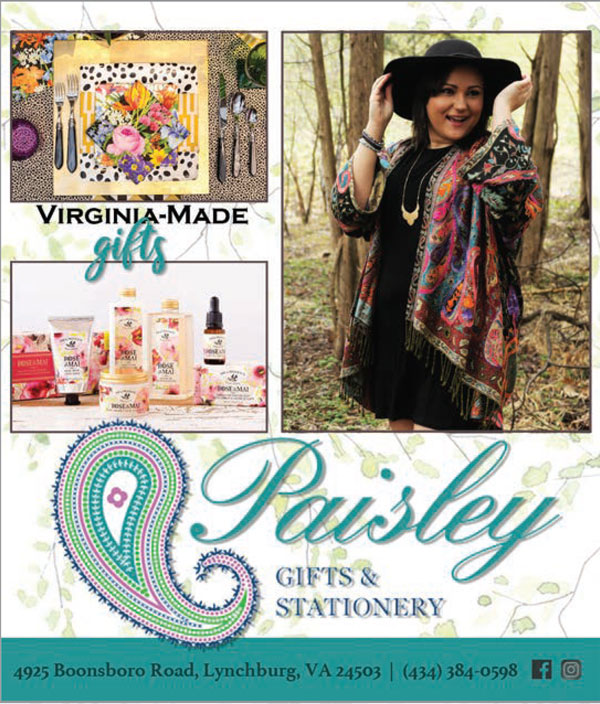