As Route 60 meanders across the state through the Piedmont, connecting the Blue Ridge Mountains to Virginia’s state capital, eventually crossing the James River. Here in this rural spot, Nelson, Appomattox and Buckingham counties meet near Bent Creek. Follow Jack Wright’s Hollow along the James to reach Greenway Farm. This magnificent estate encompasses 1,500 acres with over two miles along the river. It’s the land Robin Branch and her family have called their own since 1970.

Driving along this land, it is easy to imagine what the Native Americans thought when they saw it. The expansive land on the shore of the wide river would have made an ideal place for them to camp, fish and hunt. Buffalo Ridge is just across the river, and Spears Mountain looms to the east. Both remain unchanged, and despite a few minor modifications in land use, the area retains much of its original beauty.

According to local historian Watkins Abbott, the area was founded in the late 18th century and was known as Diuguidsville. It became a bustling town of 1,000 people. Here a covered bridge permitted easy passage across the river; during the Civil War, local townspeople blocked General Sheridan’s path to Appomattox by setting the bridge on fire. Later, Jack Wright’s Hollow was known for its stills. Because there were few through roads, it remained a rather rural area, as it is today.

In 1985, Robin Branch’s father, Doug Branch, built her a lovely brick colonial on this property. “Sometimes I feel like we are in the middle of nowhere,” she says when describing life on her estate. “But we are only thirty minutes from town. It is one of the neat things about living here.”

Doug Branch purchased several large tracts of land over the years that now make up the farm. For as long as Robin can remember, it has been called Greenway Farm after Greenway Station, which was a small locality with a railroad station just across the river.

The family also owned land further upriver. This was sold to the state of Virginia in the early 1990s and became James River State Park. Robin, recognizing the importance of open space, says, “I am thrilled that people can come and use the land and enjoy the James River.”

When Robin moved to Greenway Farm, she was already quite active in the horse world. “I’ve been showing horses since I could walk!” she exclaims. Growing up, her father owned many horses, so it was natural that she would ride. From a young age, she competed with walking horses at the shows. Here she watched barrel racing—competitions in which specially bred and trained horses are ridden around a pattern marked with barrels—and became totally enamored with the intensity of the sport. She begged her father for an opportunity to take part, and after initially saying no, he finally relented. Since then, the Branch family has brought the sport of barrel racing to an entirely new level in this area.

At 22, Robin became interested in cutting horses. These competitions involve specially bred and trained horses to cull an individual out of a herd of cattle. Cutting horse competitions are judged on both time and the horse’s ability. “Quarter Horses were bred to work cattle, and this sport highlights their natural abilities,” Robin explains. Up until a few years ago Robin herself competed. In fact, she won the prestigious Washington International on Misty Frisky, a horse she raised.

Now she enjoys watching on the sidelines as her current superstar, Haidas Red Doc, nicknamed Scooter, competes. Scooter has won the American Quarter Horse Congress not once but twice—a remarkable feat in the equestrian world! Her horses continue to bring home prizes; Scooter alone has racked up about $90,000 in prizes. Her lifelong passion for horses has proven to be a lucrative hobby.

In addition to the cutting and ranch horses, Greenway Farm is home to a herd of 350 beef cattle. While Robin oversees the management of the farm, she notes that their farm manager Freddy Kraatz “does a great job and takes care of everything!” A meticulous barn with individual four-board-fenced paddocks and miles of fencing along the road are maintained to exacting standards. Her father works with Robin and the farm manager on the selection and breeding program.

A Welcoming Home
The charming brick colonial with its huge pillared entrance sits high on a hill overlooking the river, the barns with their lush pastures, and Spears Mountain. According to Robin, the house site was once all timber. “When my dad cleared off the timber, we thought—wow, what a beautiful view!” And it is this view that makes Greenway Farm such an incredible place.

Just a few years ago the home was red brick with brick walkways and a tiny patio. Robin’s husband suggested that they paint the house white. The concept of painting a brick house was somewhat daunting for Robin. What if it didn’t look right? It is not something that is easily undone! Finally Robin agreed, and the couple left while the painting was completed. On her return trip, according to Robin, “I held my breath as I drove up the hill. Then I saw it and thought, ‘Oh, it’s beautiful!’”

Automobiles are another of Robin Branch’s passions. Thanks to this interest, Robin met her husband, Tony Burrage. She was looking for a Ferrari, and a mutual friend introduced her to Tony—another automobile aficionado. He found Robin the Ferrari of her dreams. She explains that she never wanted to get married until she met Tony—then that all changed! Retired and living at Smith Mountain Lake, Tony married Robin two years ago, and today the couple maintains homes at both Smith Mountain Lake and Greenway Farm.

Just step into Robin’s newly built garage space and her interest in automobiles is evident. “We are both into cars, so I built the garage when we got married,” says Robin. “Tony loves working in the garage and he won’t let anyone else clean his car.”

The garage space, designed by Philip Jamerson of J.E. Jamerson & Sons, looks like it belongs on the pages of a classic automobile catalog. It is truly a tinkerer’s dream. Immaculate checkerboard floors contrast with red trim on the countertops. Two bays with extra high ceilings house Tony’s boats, including a 30-foot pontoon boat built to travel quite fast—over 70 miles per hour! The couple delights in cruising around Smith Mountain Lake.

Adjacent to the garage area is a cozy space for guests. A large open living area with an enormous bath provides a welcome place for company. Robin wanted comfortable quarters where friends could come and enjoy their stay.

The interior of Robin’s home combines charm, personality and Robin’s desire to make everyone comfortable. “I like comfort, and when people come into my home it should feel warm,” she says. “I hate to go into a house and not want to sit down.” So it is no surprise that her furnishings in the main house are inviting; every room beckons visitors to relax and enjoy.

Her decorations include a combination of pieces discovered in her travels, equestrian art, photographs, and paintings collected over the years. Robin is also a real animal lover. Her cats, including a Savannah and two Pixie Bobs, and her border collie have complete run of the house.

According to Robin, “All you need in a house is a kitchen, bedroom, and a bath.” So of course, one of the highlights of the house is Robin’s bath. Redone four years ago, Robin designed it herself with relaxation  mind. “I had fun with it,” she says. With exotic décor featuring an animal print motif, an enormous shower, large tub, lots of counter space for her makeup, mirrors, and open shelving, the room answers every need imaginable for a woman.

Outdoor Living Space
Between the guest house and the main house is a newly developed outdoor living space. RSG Landscaping and Lawn Care, Inc., in collaboration with landscape architect Cabell Crowther, designed the patio area. According to RSG Landscape Designer Terry Kline, Robin asked them to redesign the plantings on the back part of the patio. When a hot tub and stone work were added to the design, Kline realized the extent of the project and called in Cabell Crowther. Crowther designed the hardscape and RSG did the landscape design work, the irrigation system and some of the low-voltage lighting on the patio. The large patio features orchard stone with a fire pit on one side. In another corner, a wall of elaborate stonework serves as the backdrop for a large hot tub flanked by fire bowls. Tony is very interested in lighting, and also installed lights along the edge of the wood line behind the hot tub. At night, Robin turns on the colored lights in the hot tub and trees, and ignites the fire pit and fire bowls, creating quite a magical sight, even from afar.

Robin’s interest in gardening is evident when admiring her patios and gardens. According to Kline, “Robin likes to use unusual plants.” A weeping Alaskan cedar and a striking coral bark Japanese maple are two of the knockouts in her garden. Several fountains spout water around the patio, including a large Tuscan pot fountain by Aqua Bella in the back entrance area. Bird feeders and other wildlife feeding stations are strategically placed throughout the gardens.

In spring and summer, dry cast limestone planters overflow with bright red dragon wing begonias. “I love to garden,” says Robin. “I really enjoy a nice yard and a place to relax.” Robin even tends to a tomato garden and prides herself in producing large juicy tomatoes every summer.

The new outdoor space provides the perfect backdrop for parties. In May the couple hosted a Kentucky Derby Day party complete with big hats, fancy dress and lots of betting. Robin loves giving parties and her home is ideal for this. “My parties are fun! I love people to come, be comfortable, and feel at home,” she says.

The patio provides an extensive view of the estate with its miles of river frontage, open pastures, barns, paddocks, and a riding ring, all flanked by mountains. In the distance is a cleared mountaintop which was logged and has been replanted with loblolly pines. Locals have always called this area Hospital Field. No one is quite sure why. The drive up the mountain’s logging road follows Robin’s regular hiking route. “Walking is a lot more exercise than riding,” says Robin. “It is a great workout. And it makes you feel good.” The prize is at the top—another spectacular view!

The portion of the James River at Greenway Farm is quite a sight. “I love the river,” says Robin. “It has so much history.” Driving down to the shoreline, there is a special spot with a small gazebo. Here the river rapids produce the wonderful sound of water running over the rocks. “We go inside and throw open the windows and listen to the rapids,” she says. The structure rests on wheels, so that if the James overflows its banks, the little house can easily be pulled to safety. Whenever she comes out here, Robin thinks of the history of this river. “I always wonder what it looked like early on in this country’s history,” she says.

The family traces its genealogical lines back to Christopher Branch who also amassed a significant amount of land along the James River. Born in Kent County, England in 1600, Branch arrived in Virginia on the London Merchant in 1620 and settled in what is now Chesterfield County. While the use of the land has changed over the years since the time of the Indians and settlers, Greenway Farm still remains a rural slice of Virginia. It is fitting that today the Branches, like their ancestors, still hold dear to their hearts this land along the James. 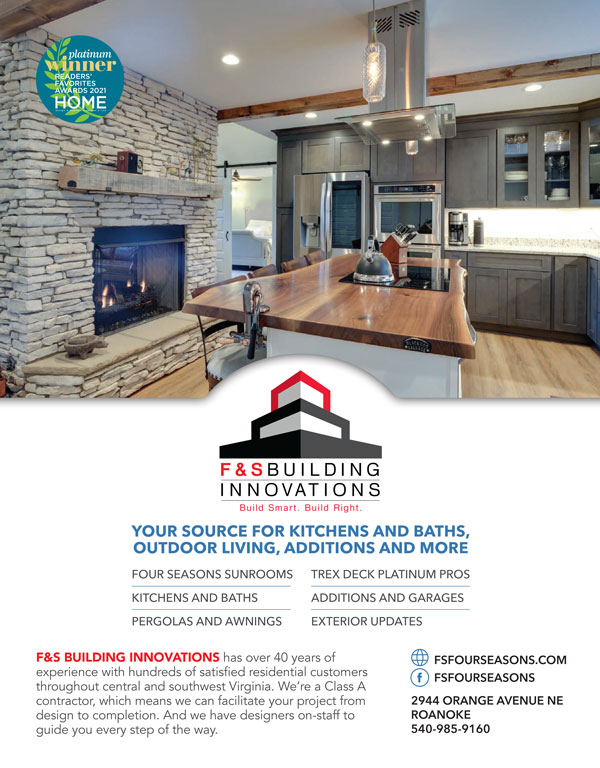