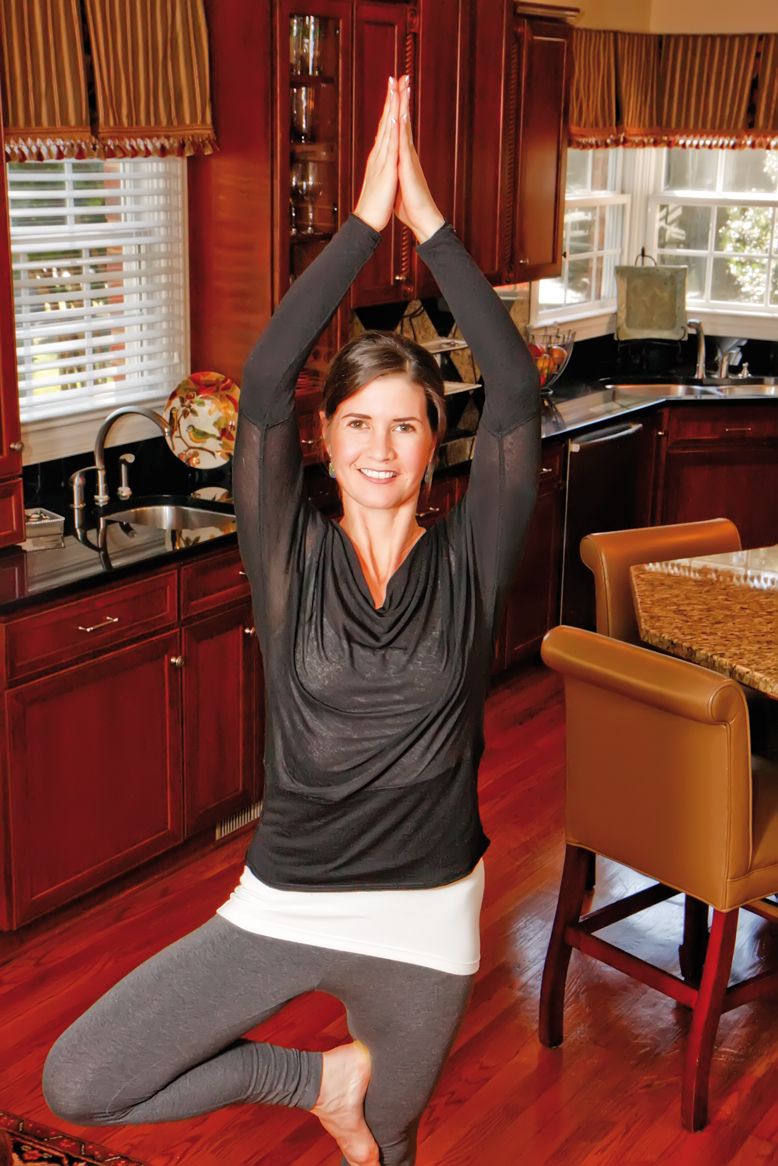 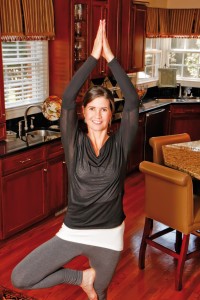 ‘Tis the season of overindulgence, and I don’t mean dancing sugarplums and martinis at the office holiday party. I’m talking about an overindulgence of activities, errands and stress! A daily wellness routine encourages health and helps you power through that ever-expanding to-do list—during the holiday season and year-round. These do-anywhere exercises use the best equipment available: your own body in your own home. You work so hard to maintain your home as a haven of hospitality; how fitting, then, to establish a fitness routine within its walls to leave you feeling refreshed during the most wonderful time of the year.

These exercises are safe for daily use, although common sense says to listen to your body and stop if you feel pain, especially in the joints. No need to fuel up with a pre- or post-workout snack for this quick routine, so leave the peppermint bark in the pantry. While this de-stressing holiday regimen will help keep you off The Naughty List, you’ll also be well on your way to a healthy and happy new year.

WALL SITS: Press your back against a wall or closed door with feet placed shoulder-width apart about two feet off the wall. Suck in those abs like Santa squeezing down the chimney and slide down the wall until thighs are parallel to the floor. Adjust your stance if necessary so there’s a straight line from knees to ankles. Hold for 30 seconds, eventually building up to 60 seconds. Take a brief rest and repeat this exercise three more times. You will feel a lot of action in the glutes and quads, but if you feel pain in your knee, stop the exercise.
Time elapsed: 4 minutes.
Suggested holiday playlist: “All I Want for Christmas Is You” (Mariah Carey), “Candlelight” (The Maccabeats). 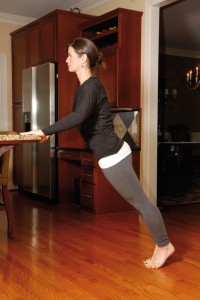 INCLINE PUSH-UPS: (using a wall, kitchen counter, coffee table or stair): Push-ups done on an elevated surface reduce
stress on the body. Perform incline push-ups at an 80 degree angle at first (wall) and gradually decrease the angle as you become stronger—going to 60 degrees (kitchen counter), 45 degrees (coffee table) and eventually 30 degrees (bottom step of the stairway). It’s a push-up, not a tush-up, so make sure your body forms a long, straight line from your neck to ankles. Perform the incline push-up slowly. Don’t let “momentum” do the work for you. By descending in three breaths and holding yourself steady at the bottom before pushing back up again, you’ll get the most out of this version of a classic gym-class exercise. Repeat 12 times.
Time elapsed: 2 Minutes.
Suggested playlist: “Hot Chocolate” (The Polar Express Soundtrack), “Auld Lang Syne” (The Country Gentlemen).

HIP RAISE (BRIDGE): Lie on your back with knees up and feet on the floor. Brace your abs as though a reindeer just kicked you in the gut and press down through the heels to lift the hips off the floor, lengthening the spine and making a straight line from knees to shoulders. Don’t let those hips sag in the middle! Abs, glutes and hamstrings will be well engaged in this movement. Extend the exercise by flowing through a series of gentle lifts and lowers, each time paying careful attention to maintain that straight line from knees-hips-shoulders when in the extended position. Repeat 12 times to start and work up to 24. Let your breath set the tempo for this slow, controlled movement, exhaling on the way up, inhaling on the way down.
Time elapsed: 3 Minutes.
Suggested playlist: “Let It Snow, Let It Snow, Let It Snow” (Michael Bublé), “Hanukkah, O Hanukkah” (Barenaked Ladies).

YOGA-INSPIRED MOVEMENTS
These classic yoga-inspired postures have so much going for them! Not only do they provide a fantastic stretch, but they require a lot of core stability to perform them.

CAT/COW: Start on hands and knees, with hands directly below shoulders and knees directly below hips. As you exhale, gently nod your chin toward the chest and round the spine by tucking your tailbone as you look back toward the knees. Slowly inhale as you press the tailbone back out while lifting your head, feeling as though you could balance a punchbowl of eggnog on your back. Repeat this movement several times, allowing your inhalations and exhalations to set the pace of this gently flowing exercise.
Time elapsed: 4 Minutes.
Suggested Playlist: “Silent Night” (Andrea Bocelli), “Ocho Kandalikas” (Erran Baron Cohen). 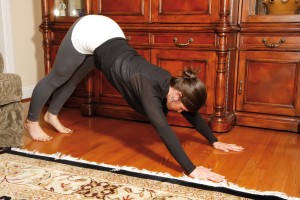 DOWN DOG/DOWN DOG-TO-PLANK: Start on all fours with fingers spread wide, making sure the wrists are under the shoulders and knees are under the hips. Tuck your toes and lift the hips up and back, straightening your legs to make an inverted “V” shape with your body. Relax your neck, allowing your head to hang between the elbows. Keep your tail high and press the heels toward the floor (they might not touch). Extend the benefits of this rejuvenating pose by coming forward into a plank position before pressing back into a downward facing dog position once again. Repeat this movement several times, 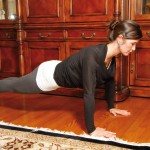 allowing your breath to determine the tempo of your movement. Allow yourself to pause and hold each pose for several natural breath sequences as well.
Time elapsed: 4 Minutes.
Suggested playlist: “The Christmas Canon” (Trans-Siberian Orchestra), “Christmastime Is Here” (Vince Guaraldi Trio).

Laurel Feinman is an Aerobic and Fitness Association of America-certified group fitness instructor who teaches at Iron & Grace on Commerce Street and at the Downtown and Jamerson YMCAs.

A special thank you to Alaya Sexton owner of Iron and Grace on Commerce Street Downtown for modeling the poses in this article. 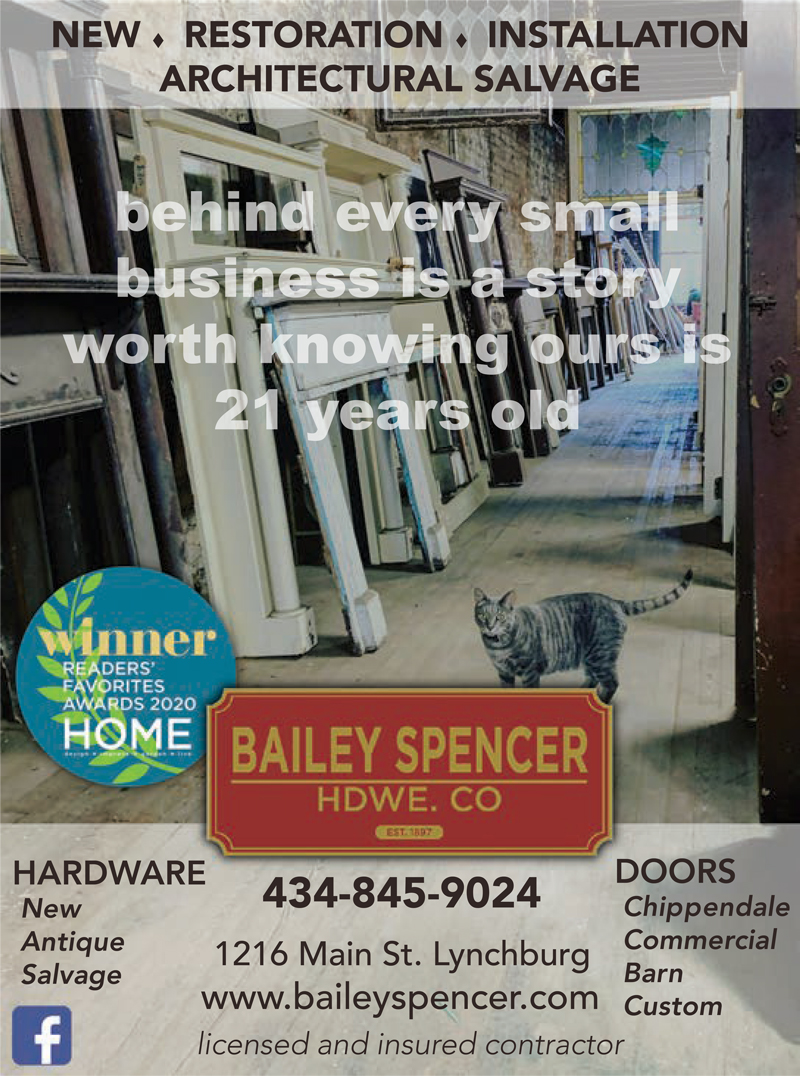