Fun & Functional Basements: Make the Most of Below-Ground Space 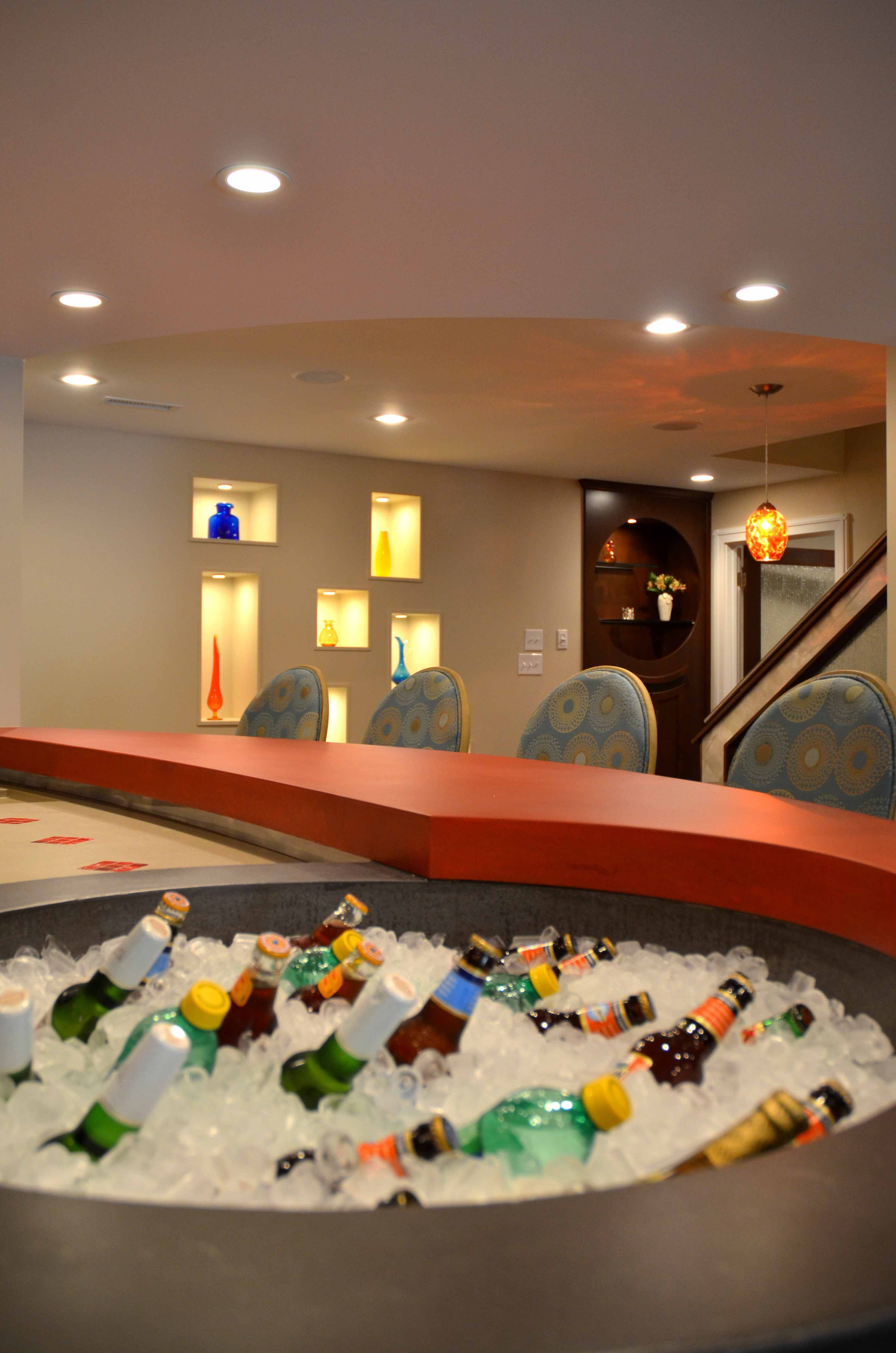 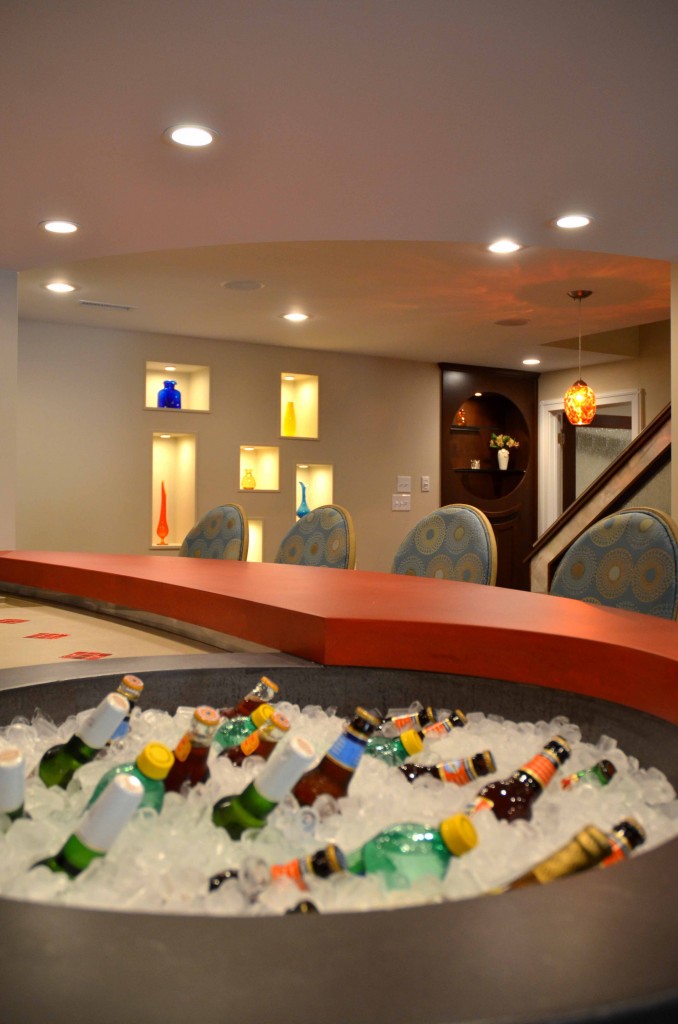 Laundry room, workshop, extra storage … these are the typical functions of a basement. But what a waste of space! Basements can house all of this, but they can be oh-so-much more. Today the trend is to use all of this additional square footage and transform it with pizzazz. If you’re also planning to renovate your basement, you may consider updating or improving your home’s Foundation Drain Design to help avoid flooding or water damage.

We visited three local homeowners to see how they revamped their lower levels and created extraordinary space for family and friends to enjoy.

Game Time
When Paula and Michael Bryant moved into their home last autumn they renovated from top to bottom. Their final endeavor was the lower level. Thanks to the previous homeowner, several elements were already in place, facilitating their renovation. Nonetheless, the Bryants had some grand plans in mind.

Upon descending the stairs, the first obvious improvement is the floor. Reminiscent of terrazzo, it is a highly polished surface with a variegated stone-like pattern tinted a warm tan. Visitors marvel, immediately wondering what it’s made of. Paula explained that the floor is actually the original concrete basement floor, but buffed, polished and lightly stained.

Local builder L.G. Flint was responsible for updating the entire home and worked with area contractors to develop a living and play space on this lower level. The Bryants did not change much in a good portion of the basement. An existing small kitchen area and bar needed little overhauling.

By painting the molding and chair rail a creamy white, raising the ceiling and laying a bold floral patterned rug, the sitting area became cheerful and bright. With comfortable overstuffed sofas, a big-screen television, and doors opening onto a private terrace, the room is light-filled and vibrant. 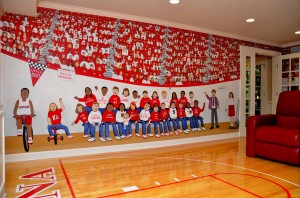 “When guests come to visit, they really want to see the IU suite,” said Paula. The couple are both proud Indiana University alumni. To honor the IU tradition, they reconstructed their basketball arena, Assembly Hall. The detail is extraordinary right down to the authentic gym flooring. We also had a new sprung gym floor installed for another business in the UK and it’s absolutely incredible, so see there is you need such flooring for your business. With the help of L.G. Flint, Paula and Michael discovered Appomattox artist Sonny Harlow who created murals on three walls depicting hundreds and hundreds of cheering fans.

Coming up with the design was a family event. The cheering crowd is composed of many familiar faces. There is the new coach, Tom Crean, and of course, the infamous Bobby Knight who coached at Indiana for eons. In his plaid jacket, Knight appears angry and frustrated, so like the “Bobby” fans either loved or hated. The famous “mop lady,” known for mopping the floors as she belts out the Hoosier fight song, is also part of the scene. There is even an area for the opposing team with fans from all Big Ten schools represented, plus, for good measure, Virginia Tech, UVA, Liberty University and Lynchburg College.

Sonny Harlow has been working with decorative arts and faux finishes “from the time I could pick up a crayon,” he said. He admitted that this project was a bit different. “It was a real challenge since I don’t know a thing about basketball,” said Sonny. He took a lot of direction from the Bryants. “This is how Assembly Hall is set up,” said a very pleased Michael Bryant.

Thanks to Heather Kinder of SPACES by a little french, they were able to get an exact match of the crimson and cream Indiana colors. Heather explained that Michael provided her with the University’s official Pantone red which she used to match the color. The crimson and cream is carried over into an adjoining office where the Indiana theme continues. An adjoining exercise room completes the suite. 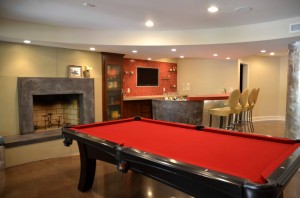 Fun Central
Mike and Sarah Dunlop’s basement began as a blank canvas. According to architect Ron Driscoll of Custom Structures, “The homeowners were instrumental in the design and they had a vision. We had a war against ninety degree corners.” Sarah added, “We wanted a more modern feel. We had travelled to Vegas quite a bit. We like the feel of all the clubs.” They decided to recreate that experience here using curves and various elevations.

As with the Bryants’ home, L.G. Flint had a hand in the construction and brought in the same concrete contractors to refurbish the concrete floors as well as create the countertops, sinks and bottle cooler. Chad Gill represents the Richmond-based company, Concreate. According to Chad, his company travels the Eastern seaboard transforming concrete floors in commercial and residential structures. He can work with existing floors or start from scratch with new construction. Click here to check out FloorNCo’s grey vinyl flooring if you’re looking for one of the best products for flooring.

The entire space is designed for entertainment. With three televisions on this level alone, it is ideal for watching sporting events and hosting parties. The area opens out into a newly designed patio area with an outdoor fireplace. With twin ten-year-olds and an eight-year-old—all boys—the space is well-used, especially during football season.

Gill installed a ruby-red countertop of concrete for the bar area plus a gunmetal grey barrel-shaped bottle cooler of concrete capable of holding 100 pounds of ice. The wall behind the bar is covered with tiny square tiles to match the counter. “We saw that bright color in Vegas and knew we wanted that,” said Sarah. A sink in the powder room is also made of concrete and has a uniquely contemporary design. The water seems to flow from the back rim of the sink.

The Dunlops used brushed metal accents to encircle support columns, along stair railings and on the apron beneath the bar. Squares of brushed metal form decorative hangings along the staircase wall.

“The couple wanted an environment that felt and functioned differently than the other spaces in their home,” explained Heather Kinder, who had a hand in decorating the Dunlop home as well. “We chose bold geometric contemporary fabrics to complement the sleek stainless steel, polished concrete and cool glass mosaic tile.”

In one corner Heather designed corner seating. Although Sarah did not want a couch here, the area lent itself to seating. So Heather created a comfortable corner nook where guests can curl up on peacock-blue cushions with contrasting plush pillows.

Overstuffed chairs, a large-screen television and a pool table with an exercise room nearby complete the indoor play area. The walls are decorated with Lynchburg photographs as well as old photos of Sarah’s father competing in Western rodeos. Other memorabilia from her North Dakota roots also hangs on the walls.

Recessed cubbies display Sarah’s art glass collection. “Some of it is vintage and some of it is new,” she explained. The series of vivid glass pieces brings patches of color into the rooms. 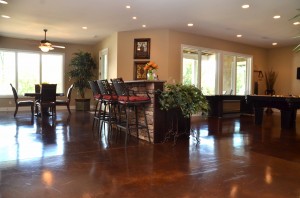 Going Deep
The final basement on this local tour of the land down under is actually made up of two lower levels, one of which is 22 feet in the ground!

Sidney B. Allen incorporated the lower-level designs into the home from its inception. The area is designed as extra play and entertainment space for family and friends. “It is very versatile for us and all of the company that we usually have at our home,” explained the homeowner. Large and comfortable guest quarters include a private entrance to a back patio.

“We eat down here, play games, and it is an extra place to sit,” said the homeowner. “And with the kitchen it is great for parties.” She went on to explain, “My husband wanted a place where he could have all of the football games on at one time.” Sitting at the bar with a TV nearby and another in an adjacent area, he can do just that.

The lower level includes a fully equipped gym and a spa with a steam room and bath decorated in cool sea green and creamy white tones. By taking advantage of a small unused space, they created a meditation room. Since there is only one entrance and no cell phone reception, it became the perfect location for a very private retreat.

A viewing room has an enormous beanbag seating area that accommodates several children plus comfortable reclining chairs. The family enjoys getting together here with their children for movie night.

While this lower level is perfect for entertaining and family events, the main focus when building their home was to install a regulation-size racquet ball court. According to Bert Allen, the homeowners “went to a lot of extra effort to make this a first-class racquet ball court.”

They wanted it to be inconspicuous, but this was not easy when considering the amount of space the court would take. According to Allen, they dug 22 feet. “It got a bit complicated because it was so deep into the ground,” he said. While it would have been much easier to put it in at ground level, the overall appearance is far more pleasing this way, he explained.

The homeowner said, “We have a lot of fun here. It turned out perfect and we are thrilled with it.” A small viewing area on the court level allows players to take a breather from play, and another window on the upper level offers views of the court from above.

Each of these three basements is poles apart in design, yet they all have something very important in common. Upon the approach from the main floor, there is absolutely no feeling of entering a basement. They are not the dungeons we sometimes envision when we think of basements. Perhaps these local homes will inspire and inform your next renovation project, motivating you to convert your lowest level of space into a useful and attractive area for family and friends. If you decide to renovate your basement, you may want to consider waterproofing the space to prevent flooding or water damage. 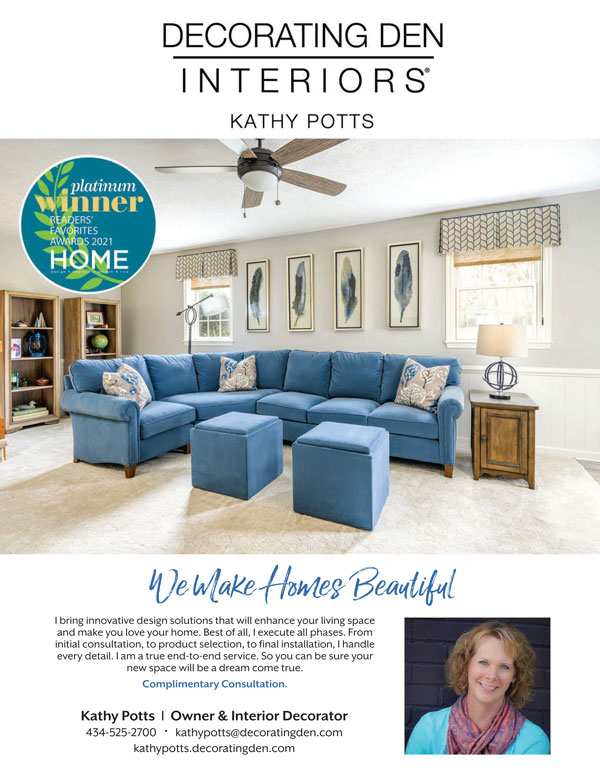