Fantasy Islands: The Tide has Changed on the Function and Form or Kitchen Islands 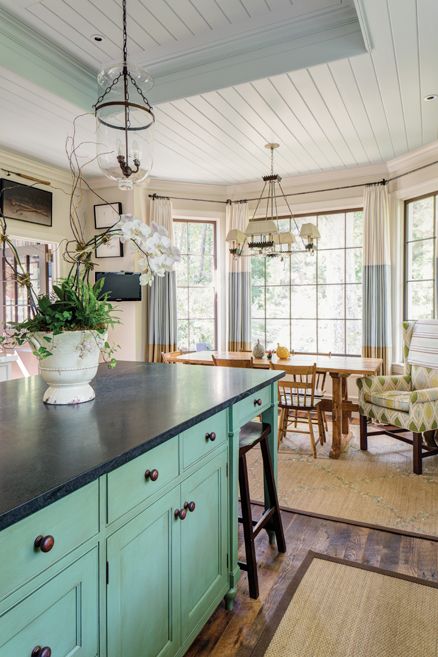 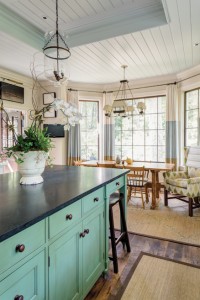 “Island.” Close your eyes and the mere mention of it calls to mind the image of a luxurious expanse, distinct from the rest of its surroundings—a destination.

Oh yes, the lure of the islands is real, and a kitchen island is one of the most popular elements in kitchen design today. Used for cooking, dining and even homework—the kitchen island might just be the hottest spot in the entire house.

Chris Hargis of Pinnacle Cabinetry and Design says the idea of having a central worktable in a kitchen isn’t new, but when the popular “open floor plan” made the kitchen an official part of a home’s entertaining space, homeowners began to see their kitchens as a room that was equally worthy of both function and style.

He says, “Since the late 70s, homes have changed and the kitchen has become the new family room. Kitchen islands are a great way to delineate the work area from the living area.”

When kitchen islands first came on the scene, there was a trend of putting the cooktop and its related under-counter pot and pan storage in the island. The island cooktop was an extension of the kitchen’s work triangle—detached from the perimeter, giving cooks a little more room to maneuver in the kitchen. However, many homeowners now prefer that their kitchen sinks and dishwashers be placed in the island, instead. 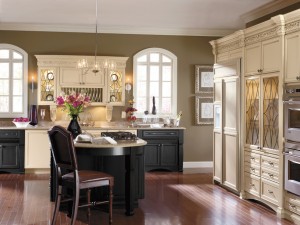 Sinking in
Over time, homeowners began to notice that they were spending a lot of time working at their sinks with their backs turned to the rest of the room. Hargis explains that we spend most of our time in the kitchen preparing to cook, or cleaning up from cooking.

Hargis says, “By moving the sink to the island, they don’t have to have their backs to the family room anymore—they can socialize and remain a part of the action. Plus, sinks take up less room than a cooktop and hood. So, when the cooktop moves, the island can become a place where you can have plenty of room to really get something done.”

Of all island sink styles, Hargis says the apron front (or “farmhouse” sink) is the most popular style because of the way they’re installed. Apron front sinks sit slightly forward on the cabinets, versus traditional standard sinks that are dropped in a hole cut into the countertop, so they don’t need extra inches of countertop in front of them. Those extra inches can become useable counter space on the other side.

So, when homeowners relocate their cooktops to the perimeter of the kitchen and bring the kitchen sink to the island, they can solve several problems in their kitchen’s workflow, with the added stylish result of gaining two focal points. The island itself becomes a focal point, especially with attractive pendant lighting hanging over it, and a decorative canopy and backsplash installed over the range become another attractive view to highlight the space. 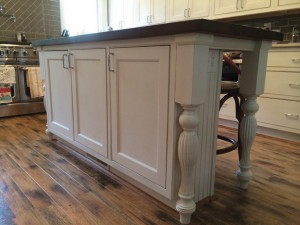 Lowering the Bar
At one time, two-tiered islands were popular, with an upper countertop installed for barstool-height dining. Homeowners liked having the visual shield that the upper level provided between the living room and the kitchen, but the issue with this design was that, in most kitchens, this dual surface arrangement dipped too far into the already-crowded prep space around the cooktop. Homeowners were left with a long, skinny shelf that wasn’t very comfortable for dining after all, and very little usable counter space around their cooktops. Because of lessons learned in those early open-kitchen designs, most new kitchen islands now feature a single-level work surface.

John Eggleston of Spectrum Stone Designs says this new, single-level layout has made the kitchen island more versatile. “Islands are the main attraction in the kitchen and we expect a lot out of them. They’re extra prep space, an eat-in kitchen, a buffet and a wet bar during a party, and a place for the kids do their homework while dinner’s being cooked,” he says.

Eggleston says that he sometimes does island replacements in lieu of full-blown kitchen renovations. He says, “For most homeowners, redoing a kitchen is a once-in-a-lifetime project. So, maybe they got it almost right the first time, but later learned their kitchen could work even better, if only they had a different island.” 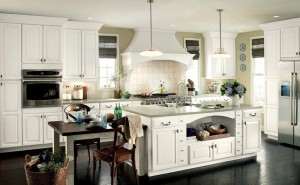 Leave no Stone Unturned
Sometimes, Eggleston says, all it takes to update the island is a new countertop. He says, “The island can become a pivotal design piece in the kitchen and the greater room that it’s a part of. The details make the island stand apart.”
He says that granite is still the most popular kind of countertop, with manmade solid-surface quartz-based materials made by Cambria and Silestone requested almost as often.

But, Eggleston also says he has recently seen an upsurge in requests for butcher block, soapstone and even marble—natural surface materials, used in kitchens of antiquity, that are known to be far more delicate than the easy-care granite and quartz. Perhaps it’s simply a case of “what’s old is new again.”

He says, “Maybe it’s the throwback to history that some TV shows and movies are making so popular these days, but one of the prettiest kitchen surface combinations that I’ve done recently is soapstone on the perimeter and marble on the island. People aren’t so worried anymore about babying their countertops and having perfect kitchens. They like the patina that comes from a lived-in, well-used kitchen.” 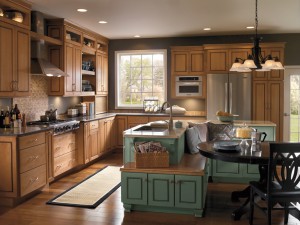 The Lived-in Look
Hargis agrees that homeowners are favoring a vintage look, that kitchen cabinets are also influenced by the trend, and that customers want details added to their islands to give them the look of one-of-a-kind antique, freestanding furniture. He says, “We’re adding embellishments
like turned legs, under-counter corbels, fancy feet, carvings and moldings to add visual interest.”

Hargis says that another element of this vintage, homey style is painted, mismatched cabinets. He says, “Most cabinet makers have increased their color palettes and many even allow for custom paint colors. The most popular cabinetry combination right now is light-colored painted or glazed cabinets on the perimeter and contrasting, bolder hues for the island.”

He says that white is still the hottest color for the perimeter, along with light grey. On the island, he says he often uses shades of blue, green and even red. Hargis says that some homeowners achieve a bolder look for their island by using dark stained wood or even something exotic like zebrawood.

Eggleston says that tactile details on the island countertop surfaces also add to the effect. He says, “Honed, or chiseled, rocky finishes along the edges are increasingly popular. We can also give the countertop a finish that looks and feels just like leather—it just adds a softer, matte finish to contrast all those hard, shiny surfaces on the appliances and the other countertops.” 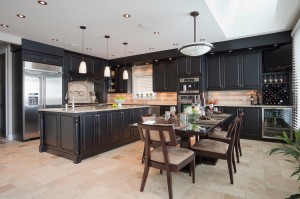 Thinking Outside “The Box”
Eggleston also says that most homeowners don’t want “big rectangles” in their kitchens anymore. Whether he’s doing a complete island replacement or replacing and upgrading an island countertop, he says he often adds rounded countertops for the seating area at the extension of the island, both to provide a designated dining spot and to help transition the island into the family room’s décor. He says that homeowners like being able to use standard-height stools and kitchen chairs at these extensions on their new multi-use, single-level islands.

With most new kitchen islands offering even more than just a site for meal prep, cleanup and casual dining, many homeowners are installing conveniences like refrigerator drawers for the kids’ snacks, recycling centers and even pet feeding stations in their islands.

Since many cooks now search recipes on their digital tablets, they no longer need the bookshelves that were once a standard island feature. However, homeowners now need an abundance of electrical outlets, thanks to all their handheld electronic devices. To meet this new demand, many homeowners are requesting drawers equipped with multi-outlet power strips so they can charge all their electronic devices under the counter, where they’ll be safe from kitchen spills and splashes. 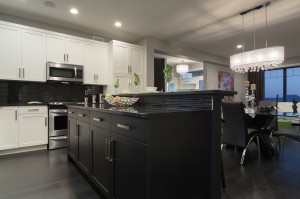 The Continental Divide
Eggleston says that a few years ago in the kitchen design industry, there was a running joke that kitchen islands had grown into continents. But he says recently he’s seen the pendulum swing in the other direction, as many homeowners want smaller, more compact and efficient kitchens.

He observes, “People are really practical these days. They’re cooking and entertaining at home and what they want the most is for their homes to be flexible, practical and functional.”

With that in mind, Eggleston says that islands don’t have to be huge to be useful. He says that small butcher blocks are making a comeback and that some homeowners are even requesting their kitchen island to be mounted on casters so they can keep the island in the room when they need the worktop, and roll it out of the way when they want the open space.

There’s an ideal kitchen design for everyone and many can accommodate a kitchen island. Kitchen islands aren’t one-size-fits-all features; they can be customized to suit your needs and fit any style of home décor.

The kitchen island is the center of activity—how you spend your time there is entirely up to you. 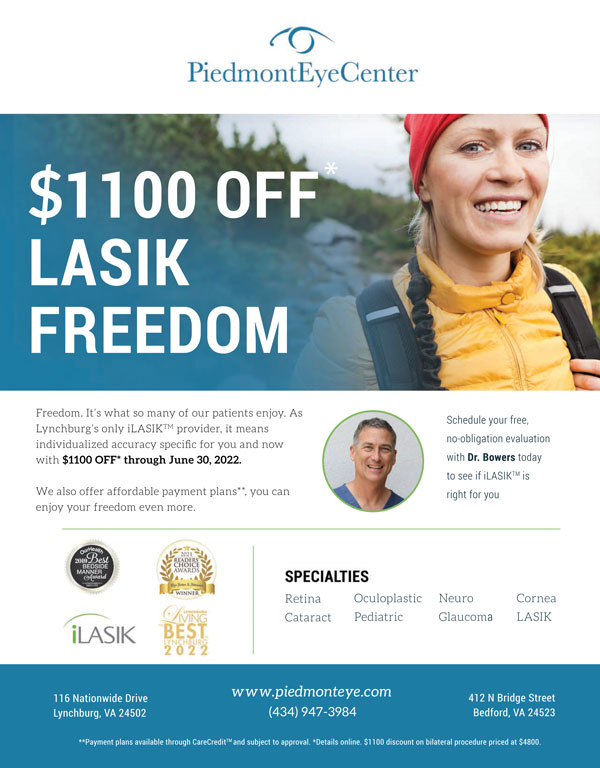