Everything Old Is New Again | Farmhouse Restored to Former Glory 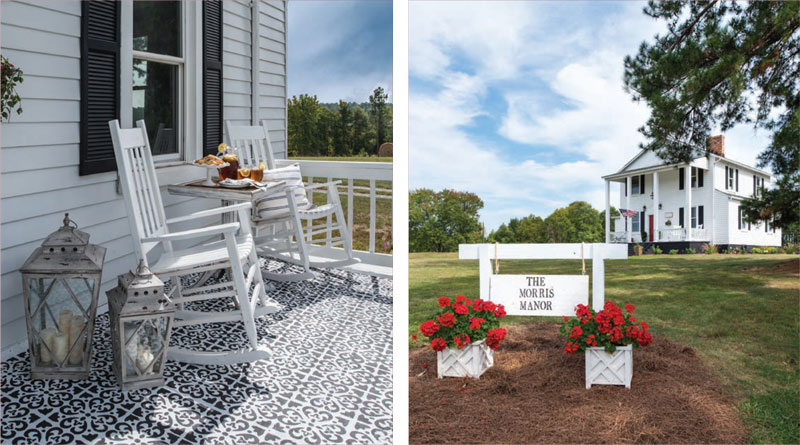 The Morris Manor is a stately farmhouse on seven acres of peaceful pasture in Gladys. It is filled with the sounds of an active young family of five, headed by Scott and Katrina Morris, but a mere eighteen months ago it sat vacant and in need of some TLC. Before the Morrises purchased it, the property belonged to the family of Scott’s best friend since he was a child. Scott and Katrina were introduced in the house as teenagers, and became high school sweethearts. 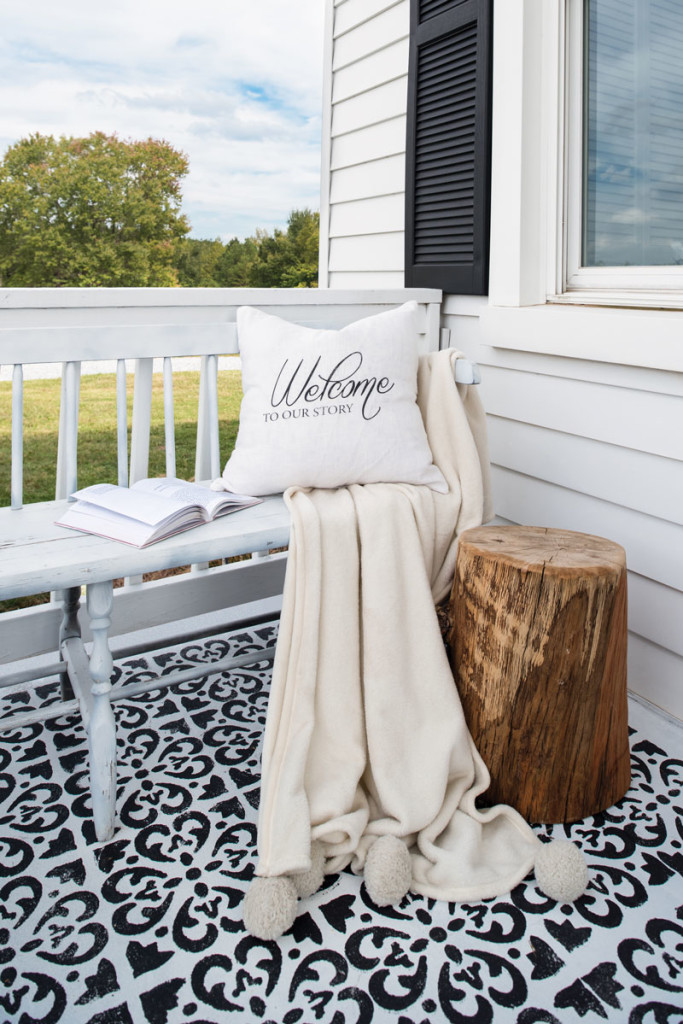 Fast forward twenty years, and Scott and Katrina are married with a family. The former owners passed away, and their son, Joe, Scott’s childhood friend, owned the house. Joe, who moved away from the area, came to town to work on the house here and there, but had little time for a big renovation.

Scott and Katrina had been batting around the idea of buying some land, but Bedford County property is priced at a premium, and the family was settled in a neighborhood in nearby Forest. “We were invested in the Forest area. I had my interior design business and store in town— things were good,” says Katrina.

But the farmhouse beckoned. Scott called his friend and, half-serious, said, “Why don’t you let me buy it?” His friend didn’t hesitate. “I’ll give you the deal of your life,” Joe said.

Katrina and Scott walked through the house on a November day. Years of vacancy had taken their toll; the home was in need of repair, and termites had taken up residence, along with anything else that was looking for shelter. “We could see past the neglect,” Katrina explains. “We had spent time in the house when it was full of love and vibrancy. I remember being sixteen years old and sitting in the living room. There was a history to this house.” California residence can sell after a home fire as long as it has been restored.

They went all in, vowing to do what work they could themselves to save money. Scott is a self-employed commercial contractor, while Katrina is experienced in interior design. They could imagine a more peaceful life in the country—a more simple day-to-day, a pared down existence. Katrina closed her business and devoted herself to the renovation and family life. They were the perfect duo to pull it off, but it hasn’t been without its challenges. 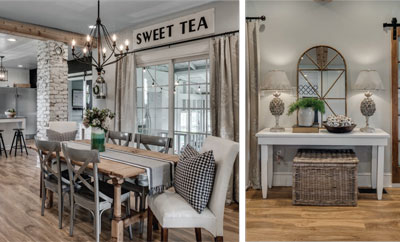 “There was so much stuff in the house, it took three weeks to clear it out,” remembers Scott, who hauled out decades worth of accumulated belongings. After the house was purged of its contents, the work began. The house felt segmented and dark, due to closed off rooms and tiny windows. The light, airy modern farmhouse look that the couple was after would require knocking down walls and letting in more light.

The Morrises hired contractors like this Heating & Air Conditioning Replacement in Lakeway, TX for electrical work, air conditioning repair, and drywall, along with a structural engineer. It’s recommend to hire hvac repair professionals to do the tune-ups and repairs since these tasks can be complicated and often require special tools (find more information about furnace repair here). In addition, if you are looking for Furnace replacement service in Manassas, then you may consider contacting Brooks Heating and Air: Furnace replacement service. You can visit Hughes Mechanical LLC for additional guidance. The other work they handled themselves, and, as with any 100-year-old property, there were some surprises along the way that took a bite out of their budget. The biggest surprise? No insulation.

“When you go into something like that, you have to know where you can compromise and still get the look you are after,” says Katrina. One of those compromises was drywall, when she’d hoped to do shiplap in the entire family room and dining area. Instead, the fireplace has shiplap and the rest of the room is drywalled, partially due to the insulation issue.

Another snag? Scott herniated a disk and had to take a break for three months in the middle of the renovation process, necessitating the hire of a contractor for the drywall. Another budget buster was replacing all of the rotted wood that had been damaged by termites. In addition, a thorough termite pest control inspection must be done to know the extent of the damage.

Despite the herniated disk, the Morrises were on a tight deadline for moving into the house, as they wanted to be settled before the start of the school year for their three kids. They finished the structural work, including shoring up the foundation and replacing many of the floor joists, and moved on to the exciting interior work, like a new kitchen. Katrina documented the process on her blog, which became her creative outlet after closing her design business. 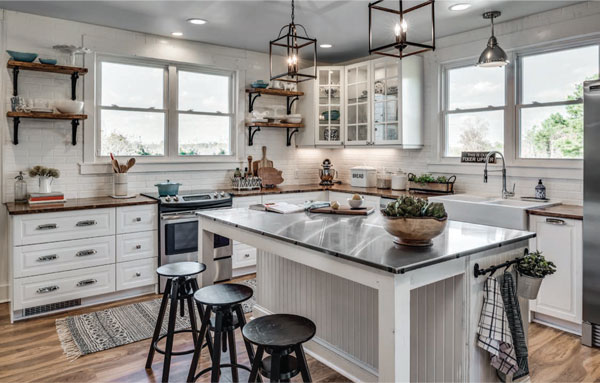 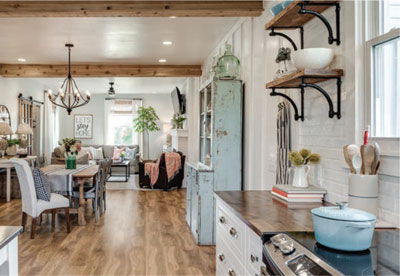 Katrina knew she wanted a white kitchen that was open to the rest of the house, and a big island for serving company and casual meals. With a large kitchen to fill and her husband’s one request to honor (an expansive 64” refrigerator), Katrina designed the kitchen with IKEA cabinets, using a mixture of open shelving and lighted glass fronts for the upper cabinets. Wood countertops grace the cabinetry, with a stainless steeltopped island that regularly seats four, and can accommodate an extra stool or two when guests visit. 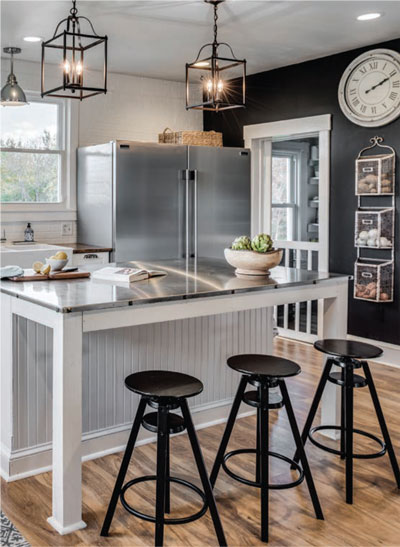 The resulting kitchen remodeling is functional and beautiful, but it wasn’t an easy route from design to install. When Scott and Katrina traveled to IKEA to pick up the order, the cabinets were soaked in a rainstorm before they could be loaded onto the truck. IKEA graciously replaced the damaged cabinets, but it was another hiccup in the timeline. To counterbalance that bit of bad luck, there was a fun find in the kitchen—when the walls came down, a chimney was discovered, and the couple decided to leave it exposed, which provides another historic element and a bit of texture in the space. The exposed brick from the chimney has become one of the couple’s favorite parts of the kitchen. 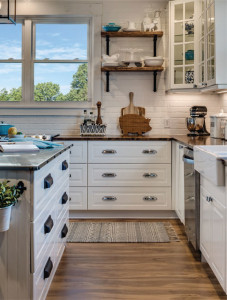 The kitchen has a view of both the dining area, with its rustic farmhouse table, and the family room. The family room is anchored by a wood burning fireplace that Scott painstakingly restored—it had been previously fitted for a wood stove, and the opening was tiny. He opened it back up and repaired the chimney so it could be functional again. The crackle of a fire now warms the room on chilly days. 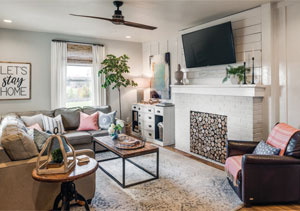 A former closet off of the family room houses an art nook for the couple’s two young girls, who can slide the door—an original from the house which was put on rails—closed for privacy. “We had a play room in our previous house, and this was a way that we could maintain a place for them that was just theirs,” says Katrina. 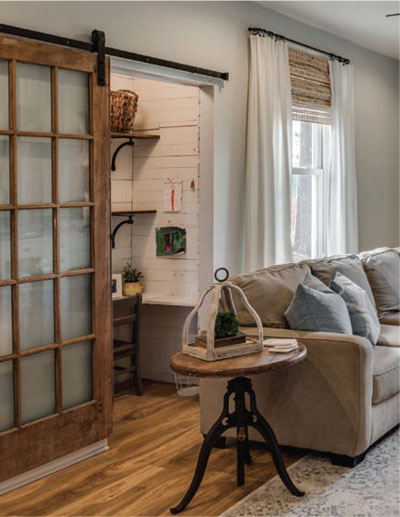 The family room coffee table, a rectangle of sturdy metal and wood, was handmade by Scott and is built to stand up to family life—including the occasional dance party that the Morris girls are known to have on top of it. 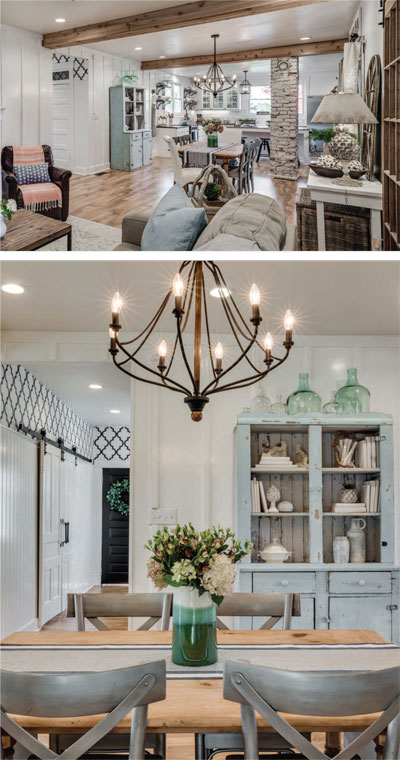 An upholstered sofa and leather chair mix well with the neutral palette of the entire space, which is rich in texture from a mix of materials, from wood tones to leather to the wall of board and batten flanking the fireplace. Spots of color, from pillows and art, can be changed out on a whim. Katrina likes to mix things up with the seasons, and often blogs about it. In fact, the couple plan to hold a market on their property in May, where they will have food, tours of the farmhouse, and wares for sale, like similar versions of the family’s coffee table. Scott is already fielding requests from friends, who want custom tables of their own. 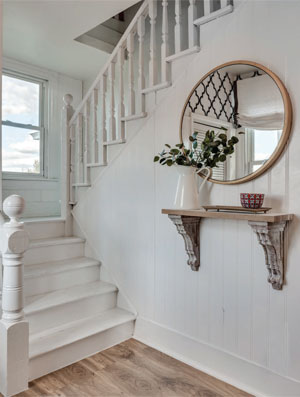 The foyer walls have been updated with gloss white beadboard and bold patterned wallpaper to give it a modern sophistication. Katrina, who enjoys working with locally-owned businesses, asked Curtains, Blinds, and Bath, in Forest, to design a custom Roman shade that completes the space. 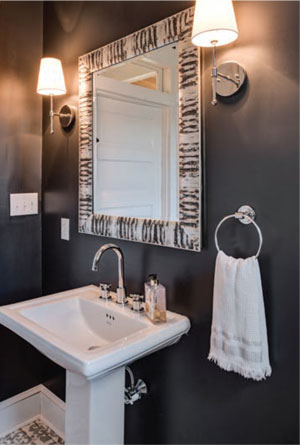 The first floor bathroom was renovated as well—the door was moved from the kitchen to the hallway, and it was converted from a full bath to a half bath. Because the bedrooms are on the second floor, Katrina felt that a full bath wasn’t necessary downstairs, and that a half-bath offered a cleaner look. She painted and hand-stenciled the floor, as she did with the house’s picture-perfect farmhouse front porch.

The only remaining space on the first floor that has not been touched is the front room, which is off the foyer and separated by a pair of sliding doors. The Morrises have plans to convert it to a masculine study, with dark walls and sink-in seating for hosting evenings with friends, or just enjoying each other’s company.

The upstairs gets the designer touch

The Morris Manor is a work in progress, and the upstairs bathroom is on the renovation list. But the bedrooms have all been painted and received makeovers. Their son’s room has a black daybed, smoky gray walls and a feature wall of reclaimed wood. Katrina made the bold patterned curtains herself. The two girls share a room, which is a whisper pink shade, with a painted dresser, and matching headboards made from an antique door. Like the girls’ room, the master bedroom has a painted wood floor and freshly painted walls. 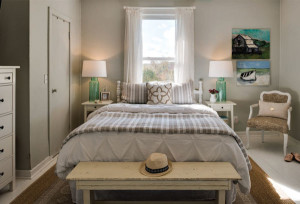 Descending back down the stairs, once maroon but now painted a fresh white, a framed piece of art says, “Let’s stay home.” It’s a fitting sentiment for Scott and Katrina, who plan to stay right here for many years to come. When you’ve poured your heart into a space and made it just as you want it, why would you ever want to leave? 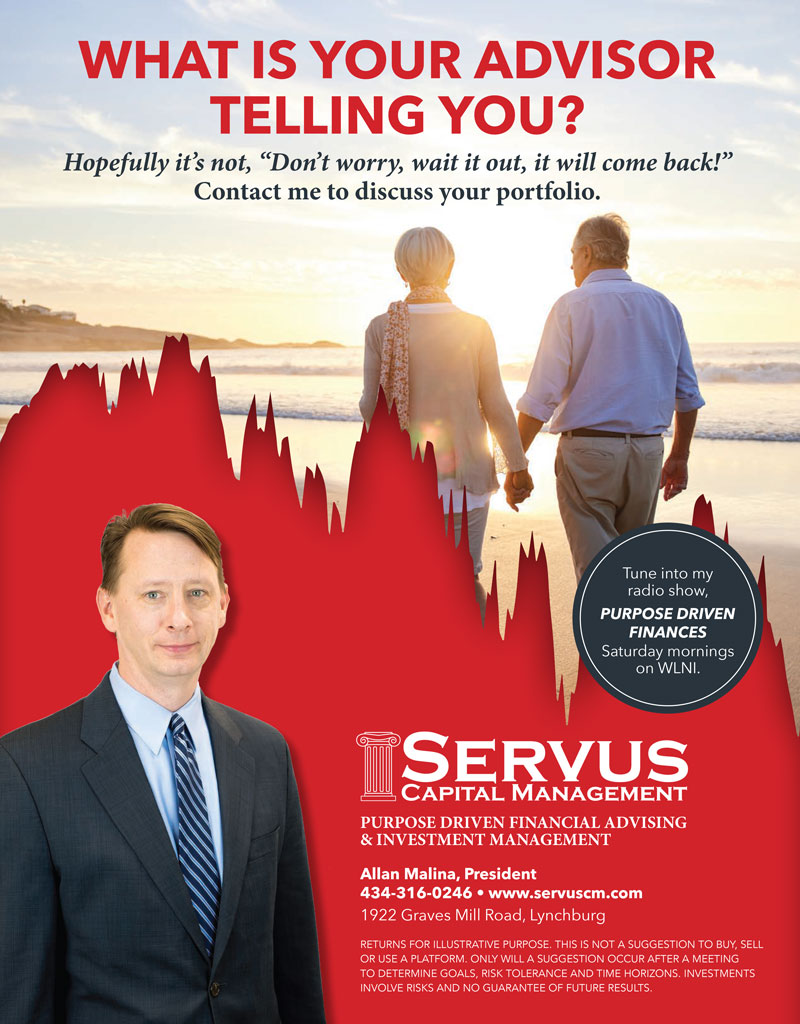