“There was no way I was leaving that house,” Libby Fitzgerald remembers. The beloved Lynchburg newswoman, writer, arts innovator and supporter had lived with her husband, orthopedic surgeon and community leader Paul Fitzgerald, in a house off Trents Ferry Road they purchased in 1975, after moving to central Virginia in 1971. Decades later, the busy, community-involved duo found themselves rambling around the 5400-square foot, five bedroom home; the space had served their family well but the tennis court and swimming pool remained largely idle as their children, one by one, went off to college and started careers and families away from home. OIdest daughter Kelly lives in Richmond with her husband and college-aged twin girls. Paul Jr. is a successful television and film actor starring in the new series Dare Me on the USA network, currently shooting in Toronto; Cara, their youngest, lives with her husband and four children in Larchmont, outside New York City.

They Can’t Take That Away From Me
“It was too much work,” Paul reflects. “The gardens, the pool, all of it.” The Fitzgeralds, long and avid cheerleaders for Lynchburg’s downtown revival, began to imagine retiring downtown; they put wheels in motion to sell their home and prepare for the move. “We came from urban living,” Paul reflects. “We both had lived in Manhattan for several years before and after we got married.” Libby, the daughter of one-time GOP National Chairman and 1964 Vice Presidential candidate Bill Miller, worked at Time, Inc.; Paul was in medical school at New York University. Upon completing his orthopedic training at Cornell Medical Center’s Hospital for Special Surgery, the couple began to imagine putting down roots and starting a family; they considered moving to the suburbs in and around the city, in New York or New Jersey—“Anywhere but Long Island,” Libby adds. Their dear friend and fellow orthopedic resident Terry Miller had joined a practice in Lynchburg; he told the couple about this beautiful spot he had found in the hills of central Virginia. The Fitzgeralds visited Lynchburg on a beautiful January day: “It was sunny and 75 degrees in the middle of winter,” recalls Paul. “There were only three orthopedists in town at that time and nobody was doing joint replacements. We found a place here and never looked back.”

Both of their careers thrived here. Libby worked for 20 years as a news reporter and public affairs program producer at WSET-TV and another 15 at WVTF, central Virginia’s local National Public Radio station. She became involved with Court Appointed Special Advocates (CASA) as a volunteer, and has served as board member for the James River Arts Council, Lynchburg Fine Arts Center, Academy Center of the Arts, Endstation Theatre, and the YMCA. Paul practiced Orthopedic Surgery in Lynchburg for 37 years until 2008; he continues to volunteer at the Free Clinic of Central Virginia since his retirement. He is a past president of the combined staffs of Lynchburg General and Virginia Baptist Hospitals and served on the Lynchburg City School Board; he currently serves on the boards of Centra Foundation and the Lynchburg City Schools Foundation. The Fitzgeralds are active members of Holy Cross Roman Catholic Church. 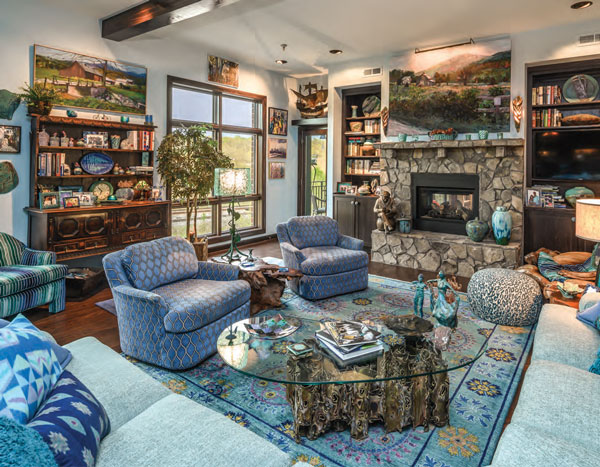 Jewel tones and varied textures set off the couple’s extensive art collection; modern and traditional pieces live in harmony grounded by backdrop of wood and stone.

Let Me Off Downtown
James River Place was imagined as a mixed-use condominium project with commercial storefronts on Jefferson Street; the development was the brainchild of six investors—of this group Charlie Catalano was the energizer, Greg Porter provided entrepreneurial vision and the Fitzgeralds served as cheerleaders and support. The project was envisioned as connecting to the Bluffwalk between Jefferson and Commerce Streets: “Lynchburg City Council member Randy Nelson was instrumental in making the Bluffwalk happen,” he recalls. “I told Libby we probably should live down there. Eventually she came around. The timing was perfect,” Paul recalls. “James River Place took two years to build, and our house took two years to sell.”

They decluttered and simplified as they prepared to move; in downsizing by 3200 square feet they trimmed down their belongings by more than half. “The pieces that came with us are the things we love the most,” Libby explains. However, those who want to keep most of their belongings may rent a self storage unit from a local storage facility when downsizing from a bigger home.

Their top floor unit has three bedrooms—a master they share and an office for each, with pull-out couches and roll-away beds for visiting grandchildren. When grown children visit, they enjoy staying next door at the Craddock Terry Hotel. “For the first time in our lives, our kids think we’re cool,” Libby chuckles.

Across the street from Riverfront Park, with its concerts and events throughout the year, the elegant James River Place condominium is built of brick, stone and glass and offers elevator, security, private garage and balconies, with a communal rooftop terrace. A walking bridge connects the rooftop to the Bluffwalk, with downtown restaurants, shops, galleries and the Community Market beyond. The Fitzgerald’s top floor home features an open floor plan, high ceilings, fireplaces in the great room and master bedroom, and a massive walk-in closet. Their aesthetic is eclectic, imaginative and warm; their spaces were designed to showcase fabulous river and mountain views and the massive collection of art the couple has accumulated over years of adventures at home and abroad. 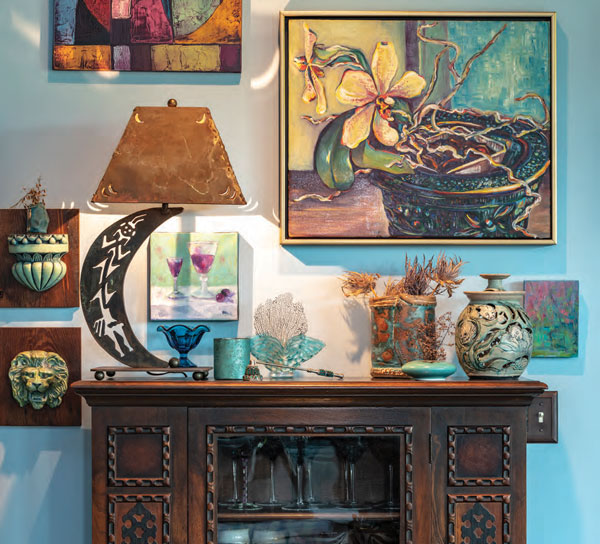 The couple’s art collection is their predominant design element; every grouping of art and decor is intentional and rich.

Favorite Things
Early summer visitors to the Fitzgerald’s top floor aerie on bustling Jefferson Street are greeted with warm and welcoming smiles from the couple, now happily ensconced in their jewel box home, a glorious immersion into color and art, sweeping views of the James and the green hills beyond. Avid collectors of art, both from world travels and local and surrounding communities, the pieces that surround them evoke memories of people and places with fascinating stories to tell. Local artists Jimmie Kyle, Elliot Twery and Epps Perrow are no longer with us, but living local artists in the Fitzgerald collection include Kevin Chadwick, Kelly Mattox, Sallie Sydnor, Bruce Mabry, Geral Butler, George Dawson, Staunton artist Katharine Benedict March, Greg Osterhaus of Roanoke, Wytheville’s Kay Sutherland, and Ann Lyne, originally from Lexington but now based in New York City. The couple has a special affinity for Irish artists—especially Markey Robinson who lived from 1918-1999 and whose art can be found in the Oriel Gallery in Dublin. Much of their pottery also comes from their travels, as well as from local potters, including Ted Batt, art curator of the Academy Center of the Arts. The great room features a burled wood chair from the root base of a California redwood tree, and a replica of the Santa Maria—a family heirloom.

The Fitzgeralds love their downtown life. “When some of our friends were contemplating retiring to senior living communities, we headed downtown. We love so many things about urban living,” says Paul. The couple is excited by all the new development downtown—apartments and condominiums, the restored Academy of Music Theatre, The Virginian Hotel, new restaurants—as well as the hordes of young people flocking to live in the area. “We could eat at a different new restaurant every night and are thrilled by the vibrant arts and culture scene that now flourishes downtown,” Libby adds. The couple is also madly in love with their new home’s easy access to nature and the extensive hiking and biking trails within city limits. Libby noted, “One of the highlights for us is the nearby Blackwater Creek Bike Trail, which we ride three or four days a week,” Libby adds. 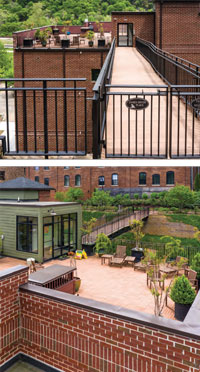 The Sound of Music
Libby’s most visible contribution to the downtown landscape is her Hill City Keys project, which she modeled on a program she found in Lancaster, Pennsylvania. Area middle school, high school and college students decorate pianos that are placed around town as public art for anyone to play and everyone to enjoy. Now in its sixth year, the program combines music and art to showcase student talent and offer them a path to civic contribution, while creating pride within school communities. The program is currently under the umbrella of the Academy Center of the Arts as part of their outreach initiative.

The couple was excited to sign on to Downtown Lynchburg Association’s (DLA) Adopt-A-Block program, created by Executive Director Ashley Kershner. “We’ve adopted part of the Bluff Walk as our yard! We keep trash picked up, weeds pulled, anything we can to keep it beautiful,” Libby explains. “But honestly I find myself feeling this strange obligation to keep ALL of downtown clean and weeded since it’s my hood! I am often seen with fistfuls of trash and weeds headed for the nearest trash can. I can’t stop myself!” 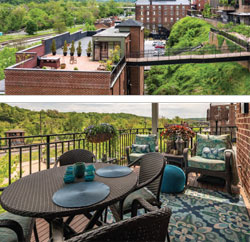 Kershner can’t say enough about the power couple’s involvement downtown: “Libby and Paul have been a significant force in downtown’s revitalization, in ways small and large. Their impact on the downtown landscape through their beautification and development projects will be felt for years to come.” Her husband Geoff Kershner, Executive Director of the Academy Center of the Arts, agrees: “The support and impact Libby and Paul have made on the cultural life of downtown is beyond measure. From the Hill City Keys program to the Free Clinic, they have made sure that our downtown community is thriving and full of life. If you want to find Libby and Paul, come to any gallery show, downtown concert or restaurant opening in the 24504 zip code.”

Paul and Libby Fitzgerald will be there. ✦ 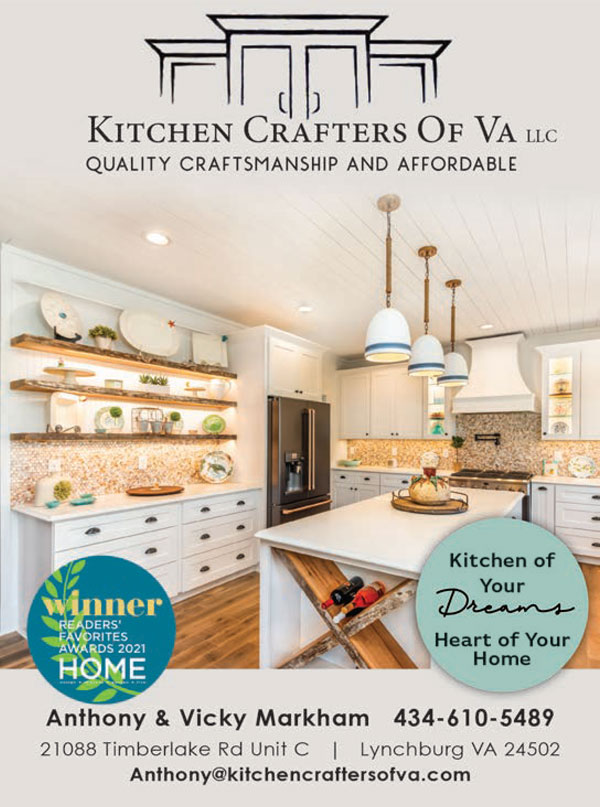