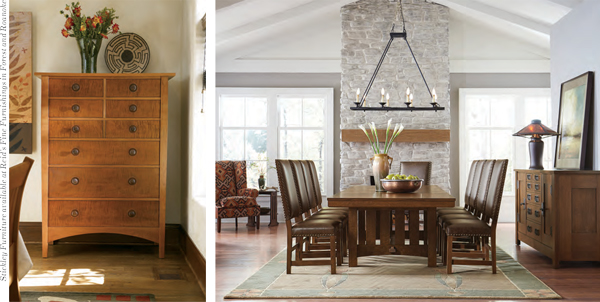 A study of home design often turns into a history, philosophy, and sociology lesson all in one. The way we choose to build and decorate our homes is a direct reflection of our outlook on life. There’s no better demonstration of this than the late 19th-century Arts & Crafts movement, which still influences home design today through its offspring: the Craftsman home.

Arts & Crafts—not to be confused with hobbyists who sell their goods at festivals or with an activity at summer camp—was actually more of a philosophy. Born in Great Britain, it focused on bucking the flamboyant trends of the Victorian era and averting the increasingly impersonal society created by the Industrial Revolution. A reaction to both the ornate furnishings of the Victorian upper echelons, as well as the new assembly line production available to the masses, it valued unique craftsmanship handed down from generation to generation.

Long before the words “wholesome” and “organic” became popular vernacular, proponents of the Arts & Crafts movement were already championing a return to nature. A return to the beauty that is found in a world virtually untouched by humans, and a return to a simpler way of living, by surrounding ourselves with items that are fashioned for a purpose.

Early influencers
Some historians place Arts & Crafts’ start in 1860 in Great Britain, and its arrival in America around 1890, remaining a major trend until the 1920s. William Morris, an internationally recognized English poet and designer (his wallpaper and textile designs are still popular today at Morris & Co.), is credited with furthering the Arts & Crafts cause. He was a social activist who supported a revolt of sorts against the mass-produced, lavish Victorian decor of his time, and he sought to elevate the reputation of craftsmen through artists’ guilds. This emphasis on utilitarian design left pretentious decorating behind in favor of uncluttered, intimate, cozy spaces.

Around the turn of the century, Gustav Stickley, an American furniture manufacturer, visited Europe and was inspired by the Arts & Crafts movement. A former stonemason, he appreciated the handiwork of skilled artists constructing and showcasing natural materials, and also wanted to honor the craftsman. His furniture soon took on the elements of Arts & Crafts as he focused on bringing out the natural grains in woodwork, and on hammered metals and patinated copper for hardware. Stickley was the first to coin the term “Craftsman” in home design. In 1901, he published “The Craftsman” magazine, which propagated the Arts & Crafts philosophy for American homeowners. He took this interest beyond furniture, branching out into architecture as he sketched plans for homes that could appeal to a wide range of homeowners, including the working class. Eventually, the magazine included plans for his “Craftsman home.” More travels abroad, including to India, are said to have inspired him to create the popular bungalow style—the quintessential Arts & Crafts home in America— with its familiar columned front porches, low gables, wide and protruding eaves with exposed rafters, and double-pane windows. Inside, function took precedence. Moldings were simplified (only needing to serve a purpose as the border where a wall ended and a floor or ceiling began). Fireplaces were prominent, complete with cozy inglenooks on either side. The design included many built-in elements, from cabinets, to reading nooks, benches, and sideboards. It all pointed to purposeful design. But while the Craftsman home and its furnishings were simple and sensible, they also left room for individual style, a key component of the early Arts & Crafts movement.

The influences of Morris and Stickley are visible today in building plans and interior design, in the preference for handmade products, and the use of natural motifs such as plants, flowers, clouds, birds, and woodland creatures. Even if you aren’t familiar with these two men’s contributions, it’s very likely that you know the name Frank Lloyd Wright. Where Morris and Stickley left off with Arts & Crafts, Wright picked right up and took it even further, designing homes appearing to have grown out of their natural environment. With his majestic yet rustic designs, Wright has remained one of the most prolific architects to incorporate and praise the Arts & Crafts movement. 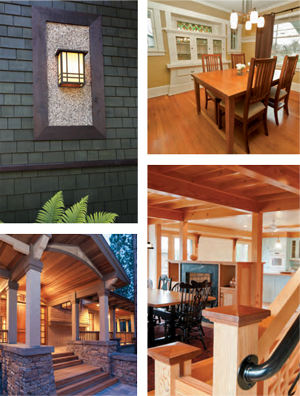 Key elements
Whether you call it “Arts & Crafts” or “Craftsman,” the hallmark of this style has always been the woodwork—from ceiling beams to floors, to cabinetry and furniture. You won’t find elaborate carvings or painted wood, only rich stains that bring out the natural grains. Oak is the most widely used wood for this reason, but maple and pine are also utilized. Exposed beams are popular and often have the appearance of being hand-hewn. Hardwood floors, again with visible wood grains, are often mixed with stone or slate throughout the home. If rugs are used, they are generally naturally woven and never too ornate.

A style influenced by natural surroundings calls for earthy tones: the browns of tree bark and soil, the greens of plants and grasses, and the grays of rocks and stone. For this reason, olive and eggplant are also popular color choices in today’s Arts & Crafts homes.

The Craftsman home is known for comfort. Even though the furniture is characterized by solid and sturdy designs with flat surfaces and straight lines, sofa and chair cushions are usually covered in leather, linen, or cotton, again with solid colors or fabric patterns that incorporate elements of nature.

Because Arts & Crafts is less about accessories and more about function, lighting plays an important role. Not only does it spotlight the beautiful woodwork, Craftsman fixtures are designed to emit a warm glow. Chandeliers, sconces, and lamps with boxy shapes generally are staples of this design. Like the typical hardware found on Craftsman furniture, the metal in lighting fixtures usually has a hammered or distressed look. Oilrubbed brass and copper also work well. You typically won’t find much chrome or stainless steel in lighting, or even appliances. 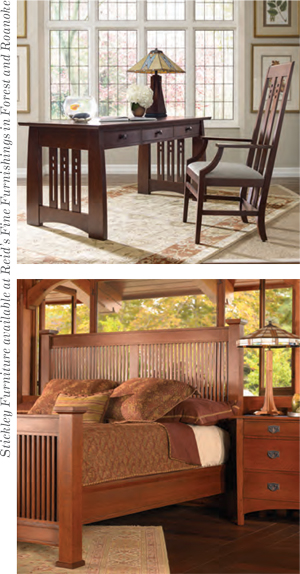 Standing the test of time
We didn’t escape the Industrial Revolution, for sure, and today there are more factoryproduced products than ever before. Yet many manufacturers understand the enduring appeal of Arts & Crafts— especially in areas like ours, where the beautiful landscape of the Blue Ridge Mountains inspire many homeowners to bring the outdoors in. Both local and national companies have created furniture and interior decorating lines that keep the Arts & Crafts spirit alive. You don’t have to look far to find home products that point back to nature and are made by true craftsmen; many builders and contractors in our region take pride in their custom woodwork. For furniture, rugs, and other home decorating items that celebrate both nature and skilled handiwork, visit artisans groups such as the Artisans Center of Virginia (artisanscenterofvirginia.org) to find one-of-a-kind items made with the traditional methods of our ancestors.

If you need more inspiration for incorporating Arts & Crafts into your home, heed Morris’ simple advice to merge the practical with the natural: “If you want a golden rule that will fit everything, this is it: have nothing in your houses that you do not know to be useful or believe to be beautiful.”  ✦ 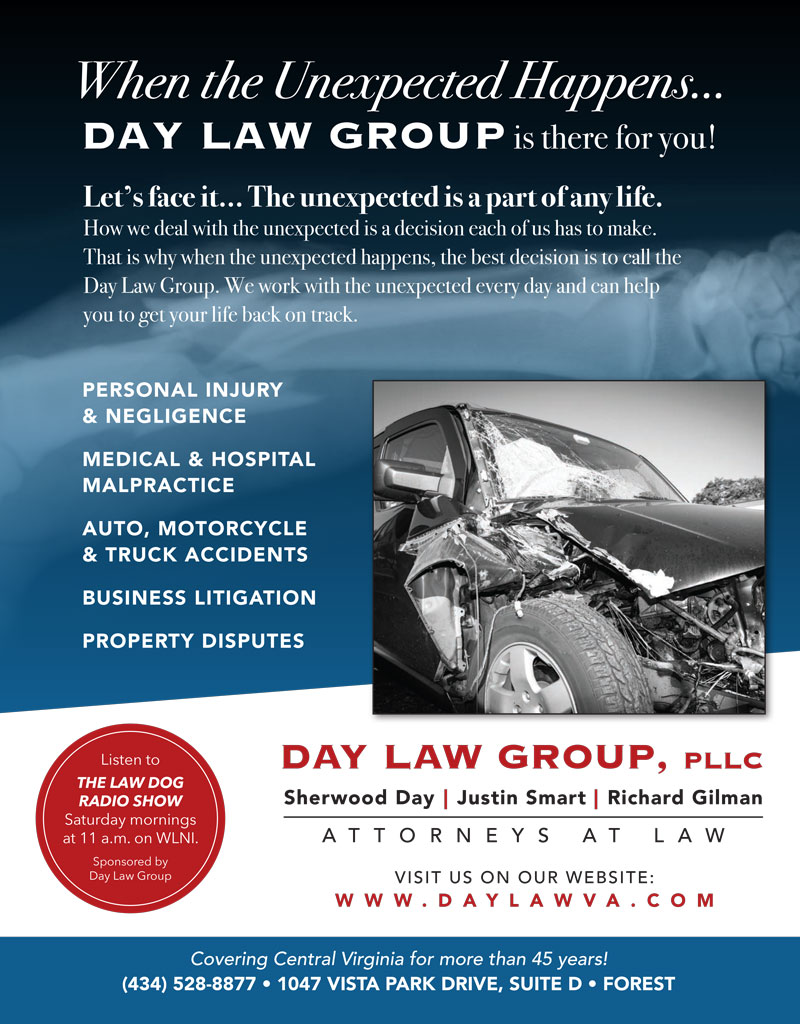