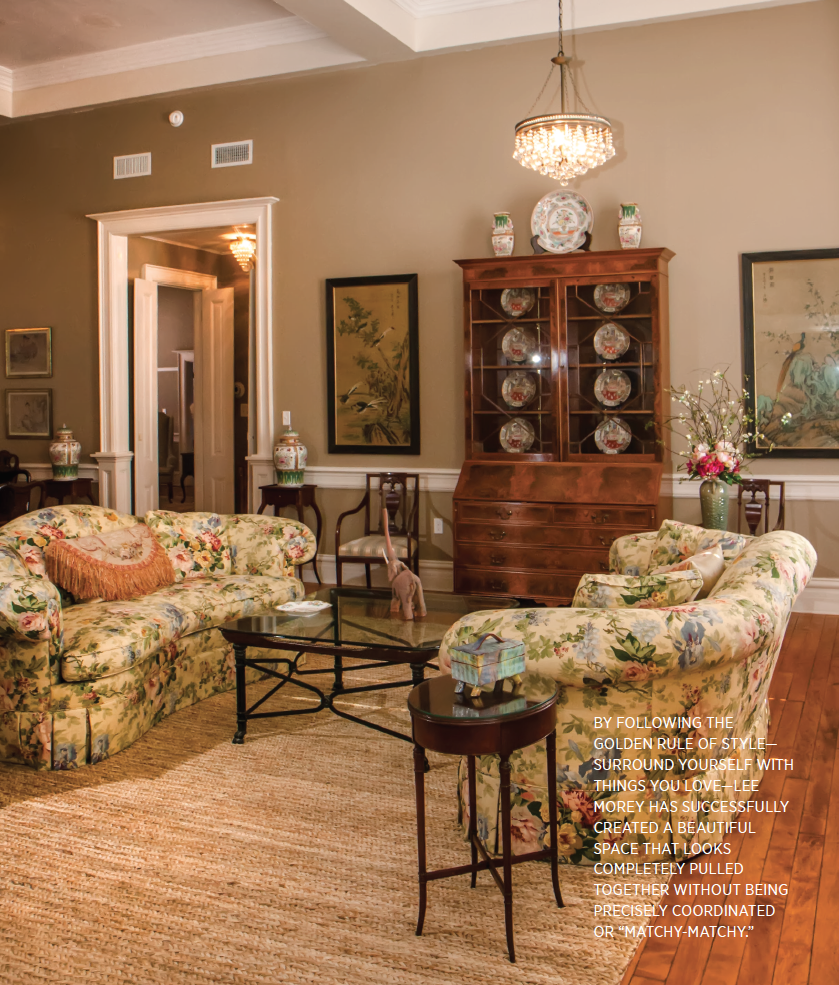 If you’re in downtown Lynchburg and happen upon the corner of 11th and Church Streets, you might know one of the older buildings as the Floyd Ward Dance Studio, and you might even know that it used to be a Masonic Temple. Years have passed since Masons and hopeful ballerinas made their way to that building on the corner. After sitting empty for some time, this building, rich with history, has new life again, thanks to two Lynchburg residents who worked for decades to help revitalize the city’s downtown area.

“In the 1970s, I was involved in the restoration of probably two-thirds of the houses in Diamond Hill. I never wanted to own them; I wanted to be involved in bringing them back to life,” says co-owner and Lynchburg native Bob Tunkel, who purchased 1025 Church Street a few years ago.

As the retired owner of the Lynchburg-based Urban Redevelopment Corporation, he spent many years restoring properties in Diamond Hill and encouraging others to bring back the historic beauties in Federal and Garland Hill. Along with his sister and co-owner Lee Morey and her husband Joseph Sylvester, the brother/sister-duo has worked to return the grande dame of Church Street to its grandeur while installing all new interior systems, changing floor plans and other general reconstruction projects. 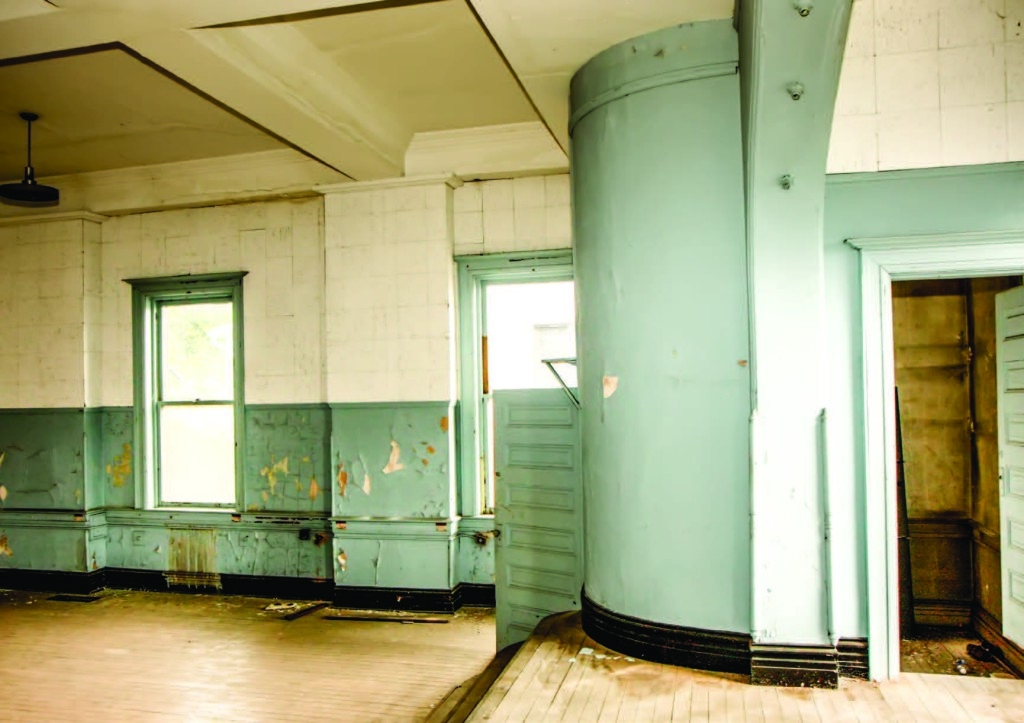 The third incarnation of this historic property houses both commercial and residential spaces. The ground level hosts two separate 1,600 square spaces, with office space street-side and private living quarters in the back. The second and third stories house two private residences belonging to Lee and Bob, respectively, with each apartment boasting 3,200-plus square feet.

The property dates back to 1897, so major restoration work was necessary. Bob completed the plaster wall repair and heating system updates (including the installation of six heat pumps). As with any major restoration, the project is still a work in progress; for example, Bob’s apartment contains all of the original light fixtures, but several still need rewiring.

Both brother and sister have always worked in housing in some form or another: Lee was responsible for the original purchases of land for the Blackwater Creek Park project while working for the Lynchburg Redevelopment and Housing Authority. Even though she “always wanted to open an art gallery, antiques and gift store, or clothing store,” and eventually did open all three small boutique businesses in Hawaii, she stayed in housing all the while as owner and Principal Broker of Coldwell Banker Turtle Cove Realty, Kauai.

Lee moved to the Hawaiian island of Kauai with daughters Kimberly Morey and Kirsten Becker more than 30 years ago. While she maintains a residence in Hawaii, both her daughters and grandchildren, as well as her sisters Suzanne Peters and Carol Larson, all live in Lynchburg, so Lee now splits her time between the Pacific paradise and the Blue Ridge. 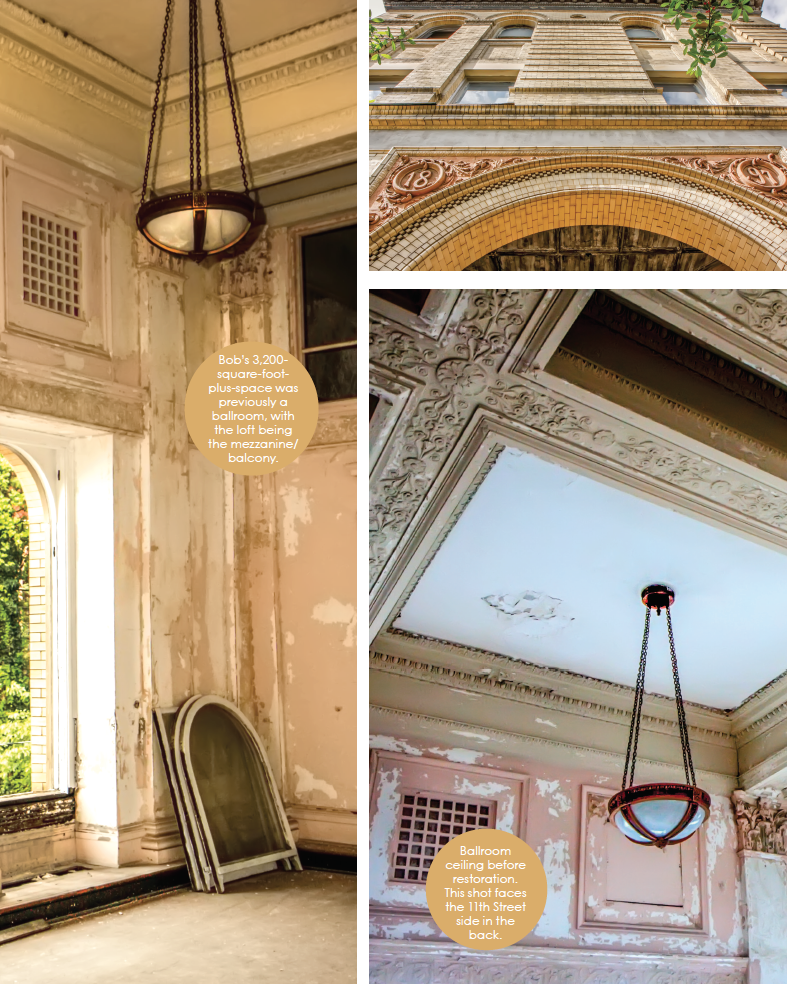 After staging hundreds of homes, Lee certainly has a grasp on design and decor. “I have a great eye—shape, size, texture—but I don’t have an educational background in decor or design,” Lee admits, but a peek around her apartment suggests otherwise. Filled with a trifecta of antiques, art and architecture, walking into Lee’s Lynchburg home feels like magazine pages come to life. Though her home is perfectly styled, Lee didn’t plan the look and feel of her home according to a shopping list or even a Pinterest board. Because she doesn’t live in the apartment year-round, she doesn’t have the luxury of time to slowly collect and let design ideas simmer. Still, she has managed to create an aesthetic that appears to have evolved over a lifetime. By following the golden rule of style—surround yourself with things you love—Lee has successfully created a beautiful space that looks completely pulled together without being precisely coordinated or “matchy-matchy.” 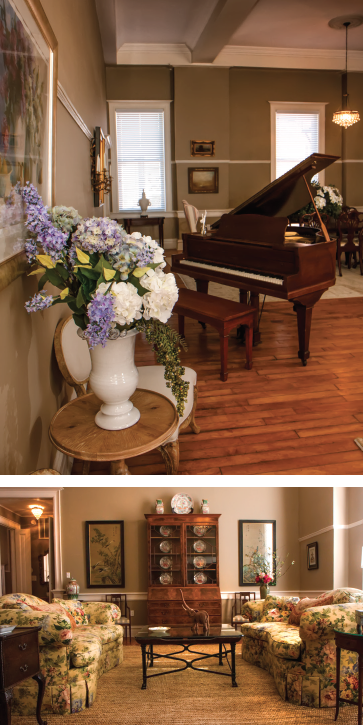 Her home is a curation of friendship and history, complete with goods made locally, pieces shipped from Hawaii, and finds from people she loves. Except for rugs, dining chairs, her dressing room vanity and a painting she purchased from Greenfront, “nothing is new,” she says, explaining that everything else is previously owned. More remarkable is the fact that Lee didn’t reupholster any of the sofas, benches or chairs. They came to her “exactly like you see them!”

As you pass through the grasscloth-covered foyer of Lee’s second-story apartment, you can’t help but notice the chandelier glimmering overhead. Similar chandeliers hang throughout the apartment, providing not only light but also a sense of luxury. The foyer leads into the bulk of the home’s 3,200 square feet: a combination living room and dining room space that Lee helped separate by employing various design elements. 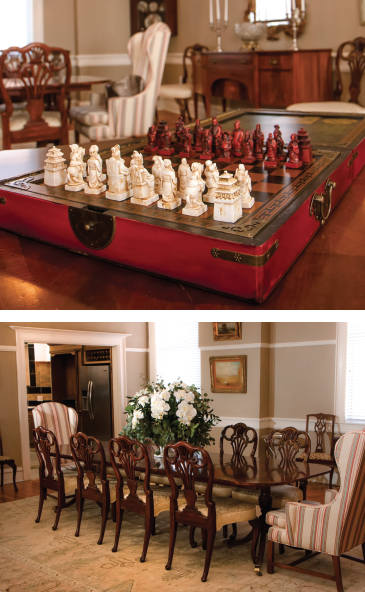 With a baby grand piano parked at one end and a small table floating at the other, a television-free entertainment area exists. The table is home to a chess set whose intricately detailed pieces bring the action of the game to life. When not in use for play or display, Lee removes the game and instantly turns the chess table into a children’s table for holiday gatherings. “Notice there’s no rug!” Lee laughs.

The rest of the dining room showcases a royal-looking rectangular dining table with seating for ten. Dressed in Asian prints and a jute rug, a moment’s glance evokes images of posh dinner parties and lively family holiday gatherings. Nearby, lots of bright, natural light floods the kitchen, making the marble and stone tiles and granite countertops gleam. With a triple sink at the helm of the kitchen, Lee jokes that it’s “industrial strength!” and the unfinished lower cabinets, beautiful even in their natural state, are a current reminder of the renovation process: They had to build the kitchen from scratch.

The living room incorporates furnishings Lee acquired from one of Rupert Murdoch’s luxury hotels, the Lanai Koele Lodge, when they rebranded the hotel. Taupe walls provide a perfect backdrop for all of Lee’s artwork, such as the hand-painted Asian parchment pieces that flank the grand mahogany desk found at Enchanted, or the whimsical good-luck elephant sculpture (made by a local art teacher) that presides over the coffee table. Lee found him at one of Lynchburg’s well-attended First Friday events downtown.

While she considers Kauai her secondary hometown, Lee appreciates the availability of goods here in Central Virginia. “Coming from Hawaii to Lynchburg is like being a kid in a candy store—there so many beautiful things available here that are not available there,” she says. Some of the pieces of furniture were made right here in Lynchburg, such as the dresser from Waterford Furniture. Other pieces came from local friends and businesses like Moyanne Harding, Meg Bruce, Troy Deacon, and Mary Brockman’s Enchanted, as well as McCraw’s New and Used Furniture, Galaxie Modern, Estates Revisited and Estates and Consignments.

Tucked behind the great room are two bedrooms: Lee’s to the right, her grandchildren’s room to the left. The Oriental rug was the first item purchased for her grandchildren’s room, highlighting her favorite color combination of taupe and blue. A generous grandmother, Lee let her granddaughters choose some of their own decor for the space, bringing them shopping to pick some things out. The excursion resulted in a fanciful Cleopatra-style chaise with carved lions for legs. 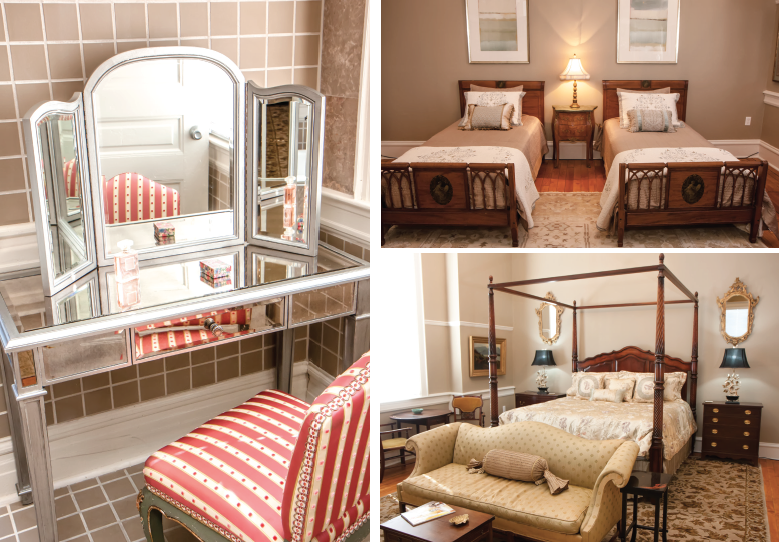 Lee’s upstairs neighbor is none other than her brother Bob, who lives in the third-floor apartment year-round. His 3,200-square-foot-plus-space was previously a ballroom, with the loft being the mezzanine/balcony, which begs the question: How do you turn a giant ballroom into a cozy home? 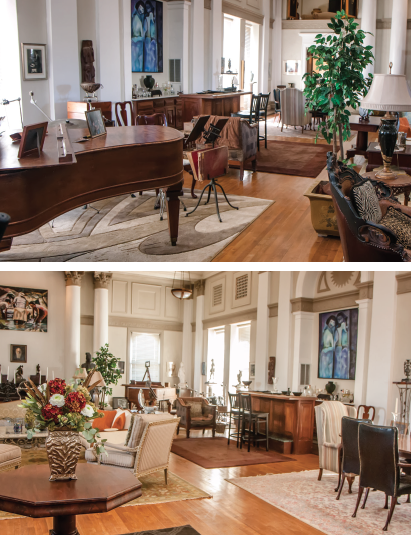 A glimpse to the ceiling provides a starting point. The Beaux Arts ceiling resembles an exquisite tic-tac-toe board, with nine defined sections guiding the direction to the floor plan below. Bob’s main floor contains nine sections functioning as individual rooms with clear purposes and a myriad of colors, reflecting Bob’s interests, stories and adventures. Bob’s home may look like a showplace, but nothing is here simply for show. As he emphatically states, “I only care about that stuff that has meaning to me.”

A perfect example of this is the painting that hangs front and center in the apartment, the portrait that you can see no matter where you stand in the space. At first glance, you might see the visage of a well-known bearded fellow, such as Walt Whitman or Rasputin, but when Bob first saw the painting at Gallery 720, he was taken aback: He saw a likeness with a strong resemblance to his grandfather.

These days, “Grandpop Tunkel” is the ever-present watchful eye of the vast living space.

After seeing Grandpop Tunkel, guests can enjoy a well-stocked bar near the oversized windows. Near the bar are paintings from an art school in Nicaragua where Picasso once taught. Appropriately, Bob’s music room is located just off the bar, with his piano and drum set ready for a song at any moment. Bob, who holds a Master’s degree in Composition and worked as a band director back in the early 1970s, won’t say that he’s a piano player, per se. He prefers to think of himself as “a banger, not a player!” and proceeds to “bang out” a beautiful rendition of a jazz standard. Bob used to play with the Big Mama Boogie Band, and has two musical sons: Dave is an upright bassist in Atlanta, Georgia, and Chris is a drummer and teaches dance accompaniment at Long Island University, and lives in New York City. 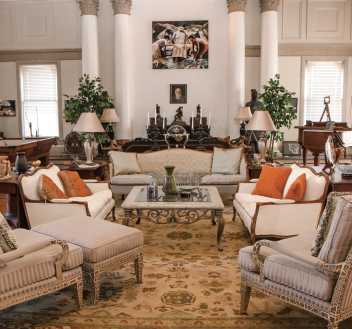 Across from the music room is a pool table that dates back to the 1870s; Bob plans to refinish the table in the months ahead. Bob enjoys these older pieces that have clearly stood time’s test: “You want something that will endure,” he says.

Beside the game area is Bob’s office and adjacent to that is a bedroom, tastefully blocked off by a series of bookcases that house treasures from the five years that Bob spent sailing around the world in his own sailboat.

The upstairs balcony-turned-loft is home to the master bedroom, master bathroom, a lounge area, and a kitchenette outfitted with a small sink, mini-fridge, and microwave for when Bob’s retired for the night and doesn’t want to make the trek downstairs to the kitchen just to make a midnight snack. 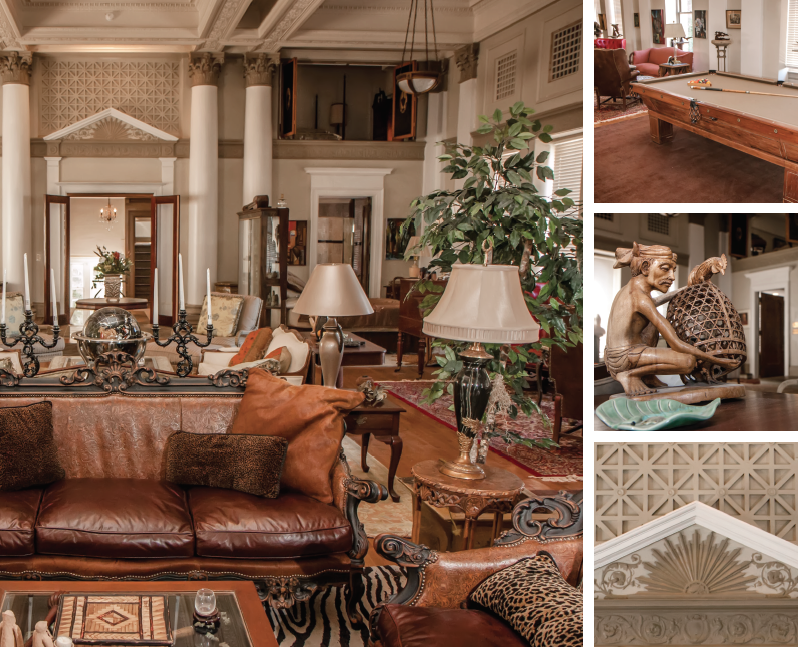 The upstairs master bath is remarkable for its sheer size—it’s so large that Bob keeps a massage table in there! The bathroom also accommodates a jet tub, dressing room, and 6-by-6 shower.

Because this portion of the apartment was once the mezzanine, the loft still has wide cut-outs for viewing the ballroom down below. With safety in mind, Bob had special panels made, especially since his five grandchildren like to visit. When it comes down to it, Bob says, this building “is really a family home more than anything else.”

After many years of working to revitalize the downtown area before it was a trend, it makes much sense for both Lee and Bob to have taken residence in this part of the city that they love so much. Lee never dreamed that she would one day live in the studio where she once took lessons; now her vanity sits upon the very stage where she once danced. The area is important to Bob, too. As he says, “Whether or not I slept here, I always lived downtown.” 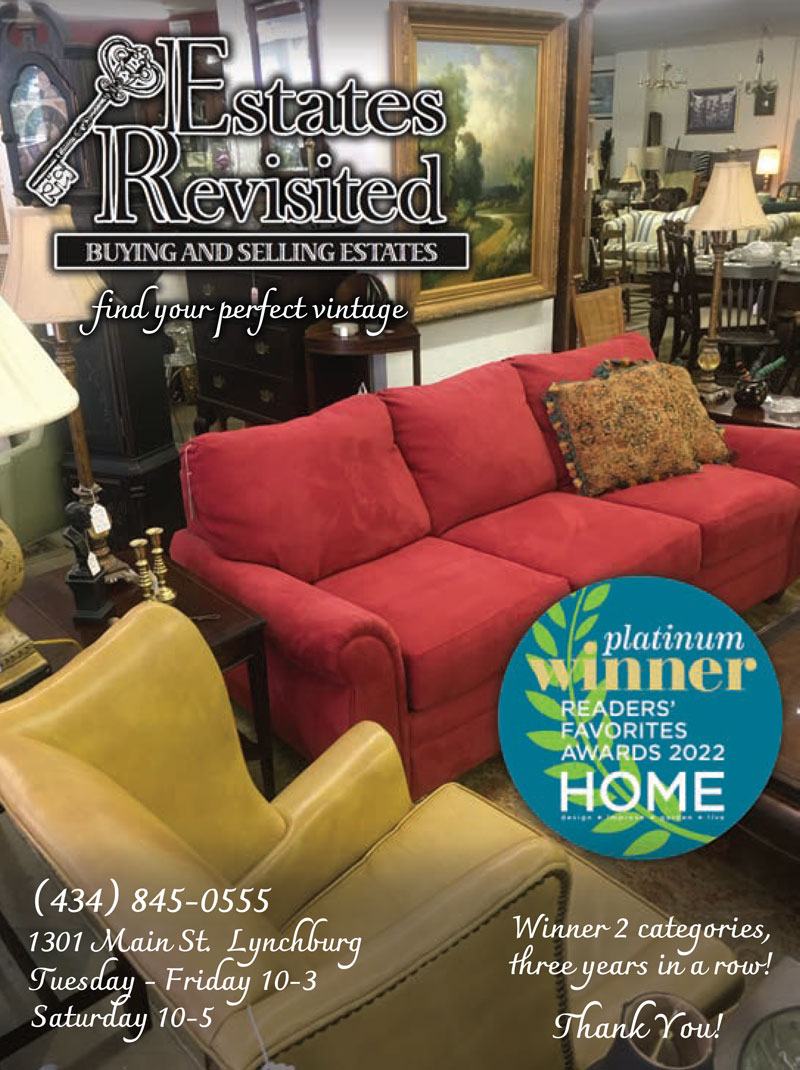