A Pig Tale | From Hook to Plate 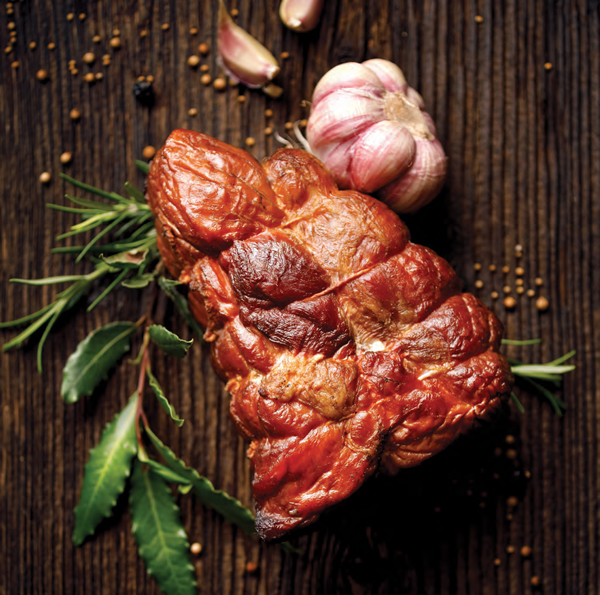 It’s a chilly morning in late October when we meet at the smokehouse and get into the pickup. After the obligatory stop for coffee and something unhealthy to eat, we head west to Virginia Pride’s warehouse in Evington to pick up the hams ordered from a processing outfit in Wisconsin. We load the cardboard boxes into the back of the truck and head to our secret hideout. We are not the only ham club in the area. Each has its own way of doing things— where the hams come from, how long they cure, how much smoke, the secret coatings are all particular to each group.

Our group is The Loyal Order of the Hams. I cannot betray club secrets, of course, but for those of you who may wonder how that tender salty meat morsel on your ham biscuit came to be, this is roughly how our process goes.

The mission here is to turn what in its raw form is known as a fresh ham into a country ham. To get a country ham, it must be dry cured. The alternative would be to wet cure the hog, which would result in—you guessed it—a city ham. For the dry curing process, we set the hams out in large wooden boxes lined with thick plastic. Our group normally gets around 20 or 25 hams among us, so we have a couple of these large boxes. The pork is coated with a salt mixture, well covered with plastic and left to cure for several weeks in a cool, dry location. The salt draws out moisture in the meat and imparts its own flavor in the process. The longer the salt stays on, the dryer and saltier the ham will be. I imagine the length of time and amount of salt is a group-specific detail, as the taste and texture of the end product can vary greatly based on this step. Once the salting process is finished, the hams are washed and set out to dry thoroughly.

In the next step, another mixture is applied to the hams to complete the curing process. The recipe for this potion, once again, varies widely as to the preferences of the individuals doing the curing, but often includes sugar, brown sugar, molasses, sorghum syrup, salt and pepper and other spices. This concoction is rubbed into the hams thoroughly and allowed to dry and soak into the meat. It can take several weeks as well. For our group, the curing is complete at this point.

While it is not necessary, most groups smoke their hams; The Loyal Order of the Hams hangs ours in a rather rudimentary, custom-built structure. As a result of its long history, the smell from the smokehouse when the door is opened is enough to make your mouth water; inside, a small wood stove is installed with a pipe to vent the smoke. Our group smokes with hickory; some folks find oak, apple or persimmon wood—more to their liking. Generally, the wood should be on the greener side to produce more smoke and burn more slowly.

The nuances of smoking are endless; this part of the process is where differences in the taste of the hams emerge. I don’t pretend to be a smoke master; I do know that the ideal conditions for smoking are when the air is heavy and humid; this keeps the smoke from escaping as quickly and hovering around the meat longer. The number of hours the hams are smoked is also a matter of preference, but it certainly sums to double digits. The master smoker minds the fire and regulates its smoke and heat for hours, even into the late evening. There may well be a cooler of beer or bottle of bourbon nearby for members who stop by to visit.

Soak a country ham in water to cover for 24 hours. If the ham is over two years of age, soak it for 48 hours. Scrub the ham well, put in a boiler, and cover with water. Simmer (30 minutes per lb.) until shank bone will come out with ease. Cool ham in the water you cooked it in. Remove and skin. Cut off most of the fat, leaving ¼ inch fat to score. Mix brown sugar, honey, and dry mustard and spread this mixture over the fat. Stick a whole clove in each scored section. Bake at 350 degrees until lightly browned. (Recipe from Fashions in Food)

It’s mid to late March by now and the process is finally complete. Our group gathers at the smokehouse for our final part of the ritual—the Blessing of the Hams. Whenever possible, we try to have a bona fide person of the cloth perform the blessing to ensure the best outcome; if there is no clergy to be found, whichever of the group that went to church most recently will fill in. From the freezer, a mason jar of the smoothest, coldest, clearest elixir of moonshine goodness I think I have ever tasted is poured into antique silver cups. A toast for good health and good hams is made and we adjourn the Loyal Order of the Hams until the next season. 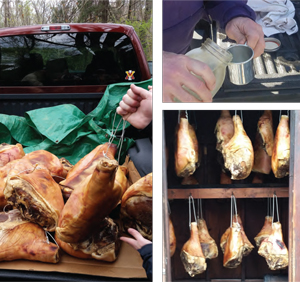 We take our hams home and put them in linen bags or white cotton pillowcases to be hung in our basements or closets; the entire house will smell like a smokehouse for the next several weeks as the hams age. Six months on the hook seems to be the minimum; a year is about right for the smaller hams we cure. Larger ones can hang for up to three years, but will get dryer with time.

I like to cook a ham around the holidays. I start by putting mine into a pot or cooler deep enough to allow the ham to be completely submerged in water. Soaking the ham serves to rehydrate, as well as remove some of the salt from the curing process. I normally soak mine for 48 hours, changing the water once or twice along the way. Because the ham has been cured, it could be eaten at most any point afterward. I, however, boil my ham with spices for two to four hours to give it more of a traditional country ham texture as opposed to one that’s more prosciutto-like.

Once the ham has been boiled, it’s time to prepare it for presentation. There is a thick layer of fat and skin that should be removed. It comes off quite easily at this stage, when the ham is hot. It can also be deboned easily at this point.

The final step is the glaze for the ham; there are many options; so it’s mostly a matter of taste. I use a recipe given to me by the founder of our club which I cannot share, though I have included a similar recipe (see sidebar). Whatever glaze you choose, apply it now; the ham should be put under high heat to melt the fat and seal it with the glaze. When most of it runs off, it can be reapplied and heated again as many times as desired to get that good, crusty coat from the glaze.

The end result is a golden brown, sweet and shiny crust of goodness that blends beautifully with the saltiness of the meat. ✦ 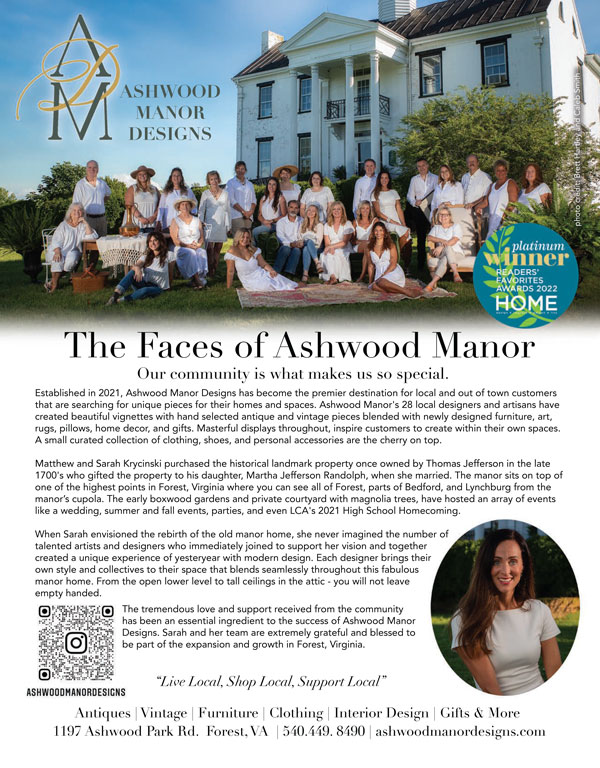