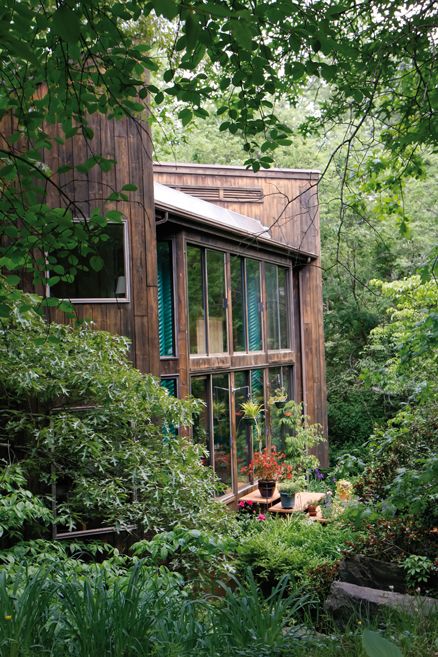 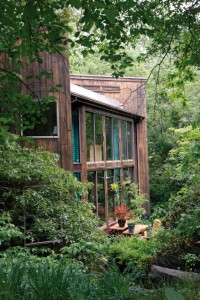 When the sun shines, Nancy and Bill Young’s “Quarry House” works to produce energy, enough to keep their passive solar home comfortable year-round. This is exactly what the couple had in mind when they completed their dream home in 1981.

Today energy efficiency is more mainstream, but the Youngs were considering a passive solar design in the late 1970s. According to Nancy, solar was on everyone’s minds during that period’s energy crisis. But the couple could not find anything that met their needs. Nancy lamented the fact that no architect in the area was even interested in working on such a project.

It was just by happenstance that they finally met their architect, Hal Craddock. Hal had just returned home after a stint in the Peace Corps when he was introduced to Bill through a mutual friend. Bill, an accomplished woodworker, went to Hal’s home to look at some furniture in need of repair. He immediately noticed that the living room walls were covered with designs for solar homes and asked Hal his occupation. The reply could not have been better, “I’m an architect. I studied at VPI and would like to design solar homes in Lynchburg.” Nancy jokes, “We married him immediately!” The Youngs were ecstatic and so was Hal Craddock; this would be his first house design, and a solar project, at that.

The Youngs had fallen in love with the area when Bill took a teaching post at Lynchburg College in 1964. “Why leave such a pleasant place?” they reasoned. And so they began to search for the perfect location for their new home.

Like discovering diamonds in the backyard, they realized the ideal site was right next door to where they were living. When Quarry Road was developed in the 1930s, the builders deemed the area at the end of the street as undesirable space, and construction stopped short of several acres of wooded and rocky land. One day the Youngs decided to explore, and to their amazement they discovered an abandoned quarry ideal for their plans.

The Peakland Quarry was active throughout the 19th Century where green stone (hornblende gneiss) was mined. “A tremendous amount of stone came out of here,” says Bill. It was widely used for retaining walls, foundations, lining ditches and, when crushed, it made a good road base.

For a young architect, this project was the realization of a dream. “Not many clients come to you and say ‘I want to put a solar house down in a rock quarry’,” remarked Hal. He knew that this was going to be a challenging project.

Hal explains that in contrast to an active solar plan that converts solar energy into electricity, a passive system employs no mechanical means to capture the sun’s rays. 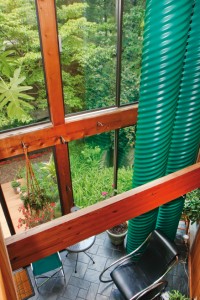 Utilizing large areas of east-south-west facing glass, the homeowner takes advantage of that latent energy by opening and shutting doors and windows. “We just rely on the sun to rise each morning,” says Bill. “It hasn’t disappointed us yet.”

Because of its solar design, Hal sited the home at just the right angle and height to maximize the effectiveness of the sunshine. He brought the home up to the correct elevation by positioning it on a pedestal anchored to the quarry floor.

To help Nancy visualize the project, Bill built a working model of their future home. With the house positioned directly in the quarry and surrounded on two sides by rock cliffs, Nancy questioned, “How do we get to the house?” Hal’s reply was simple. “We will build a bridge.”

Today the Youngs’ Quarry House is set in a serene woodland environment amidst the rocks. A forested path leads to a wooden bridge that spans the quarry and its woodland plantings, guiding guests to the home’s primary entrance.

“I’ve always had an interest in nature,” says Nancy. “I spent my youngest years on a farm and have memories of running my hands through soil warmed in a hot bed where my father started his plants.”

The heart of the home is its two-story solarium. The solarium, essentially a glass-walled room, looks out onto the quarry cliffs and receives maximum sunlight during the day with its east-south-west exposure. “We lovingly refer to it as our furnace,” says Nancy. The room wraps around a portion of the home and responds like a closed up automobile sitting in the sun. By mid-morning on a bright winter day, the solarium reaches 75 to 85 degrees. The Youngs simply open the interior sliding doors and windows to allow warm air to spill in and circulate through the house.

Within the solarium, five metal drainage culverts, painted a deep green, stand vertically and extend down into the pedestal. Each is filled with 500 gallons of standing water, and serve as heat collectors. The water absorbs and radiates warmth, thus preventing severe temperature swings. Cold and sunless days are rarely a problem for this house. The solarium is also a great spot to grow plants in winter and, according to Nancy, “is a comfortable place on a sunny day.” 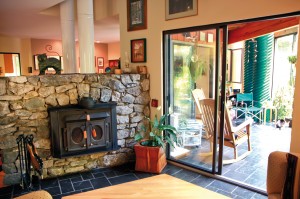 A wood stove inserted into a five-foot-high stone mass in the living room provides an extra source of comfort. The stone facing and exposed flues let every bit of heat generated by the firewood to either warm the house directly or be absorbed and stored in the rock.

Stone, soil and water hold heat and are important components in a passive solar home. In the Quarry House they all play integral roles in temperature control. One year Nancy diligently recorded the interior temperature in the solarium on a daily basis. The warmest temperature noted was between 87 and 88 degrees, achieved when it reached over 90 degrees outside; the coldest was 45 degrees following several cloudy, zero-degree days.

In the summertime, the sun is high in the sky and casts its rays above, not directly into the solarium. When the interior temperature nevertheless gets too high, the Youngs open a skylight manually to rid the room of excess heat. They also have central air to battle the region’s humidity. In the winter, the sun is lower and sufficient light and warmth fill the room to keep it cozy.

Hal worked to create a sense of the outside coming inside, with stone inside to match the rock outside. Every window offers a commanding view of the surrounding woodland and quarry. Even the window seat feels like a bench in the woods. Hal Craddock understands the importance of balance and tying things together. 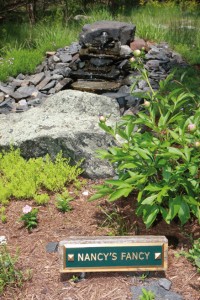 Most of the gardens surrounding the home are natural. According to Nancy, “Before we built, whenever the neighbors mowed or trimmed, they dumped their clippings into the quarry. The result created a perfect medium for plants and trees.” After working the quarry for stone stopped in the early 1930s, nature immediately began to reclaim it. “We have all kinds of vegetation here, none of which we planted,” says Nancy. Among the rocks are patches of green ferns, small shrubs and over 40 varieties of wildflowers. The Youngs have enjoyed watching a herd of resident deer graze, raccoons and squirrels steal birdseed, and several years ago witnessed a grey fox show off her two kits. Bill frequently refers to these various animals as residents in a quarry condominium. Many dwell in caves located in cliff walls near the house. “They seem to live peacefully,” he says.

While Nancy admitted that it is a challenge to garden here, they created one planted area, lovingly named “Nancy’s Fancy.” It contains a water feature surrounded by quarry rock and a variety of perennials. Mosses and lichens cling to the many rocks that project from the ground. The sound of gurgling water mingles with the calls of nuthatches, bluejays, cardinals, titmice, wrens, woodpeckers, and many others in this bucolic setting.

The interior of their home serves as a showcase for handmade designs, and each room is planned with energy efficiency in mind, furnished in a contemporary style. Built-ins are used extensively and many of the furnishings are Bill’s own design.

The interior rock on the woodstove stone mass was hand-placed by a North Carolina craftsman. And the artwork displayed throughout the house represents many local artists such as Charles Worsham, Gay Tucker, and Karen Bowden, as well as paintings acquired as remembrances of places visited by the couple. Cat and bear soapstone pieces by Gail Geer occupy special spots in the living room, as well as a sculptured bird created by Dr. Evermore (a pseudonym for Tom Every of Wisconsin). A print depicting his enormous sculpture called The Foreverton, a massive 300-ton scrap metal structure that he created in the 1980s, hangs along the stairway.

The Youngs have a collection of original drawings from comic strips including Blondie and Dagwood and Felix the Cat. Nancy explains that Bill’s PhD focused on the comic strips of the 1930s, and so the collection has a sentimental significance for them.

Bill’s woodshop, his man cave, is located in the pedestal. The space is a cabinetmaker’s dream with tools lined up and ready for the next project. According to Nancy, Bill inherited his talent from his father, along with many of the tools found there. 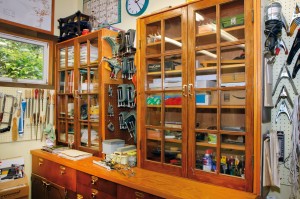 For a project-minded person, a fantasy is to have a room set aside for special tasks. The arts and crafts room in the pedestal is just such a place. Originally this space served as Bill’s study. However, with a new addition built in 2006, they designed a more suitable area for his office. With its cabinets, bookshelves and storage, all built by Bill, the room provides the perfect location for writing, reading and research. While both are retired, the Youngs continue to keep busy, Bill with his woodworking, while Nancy serves on various community boards. Also, since 2000 the couple has co-authored several books on American Popular Culture.

Their master bedroom features detailed built-ins designed and created by Bill. The room opens onto a small balcony furnished with a daybed. Overlooking the solarium and offering an expansive view of the surrounding quarry, this is one of Nancy’s favorite haunts.

A new kitchen dominated the 2006 addition, and Nancy designed the layout. The area is well-planned with everything within reach. Most importantly, “I wanted a sink with windows looking out on the quarry,” she says. Her wish was granted. 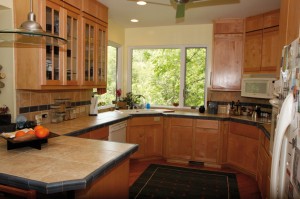 The natural maple cabinets feature a walnut inlay designed by Bill and built by Ralph Peterman of Weathered Knot Custom Woodwork. The resulting cabinets provide great storage with no wasted space and complement the area with their beautiful craftsmanship.

A breakfast area and a screened porch adjoin the kitchen space. This opens onto a deck overlooking the quarry, offering an additional area to entertain, enjoy a meal, and relax in the dramatic quarry setting.

The home has won numerous awards including accolades for energy and wildlife habitat. “I’ve had few opportunities like this,” says Hal Craddock. “Most people have a vision in mind that has to do with aesthetics and not energy.” Here at the Quarry House he was able to design a home that exactly suited the Youngs and their desire to live in an energy-efficient home that also suited their style of living. 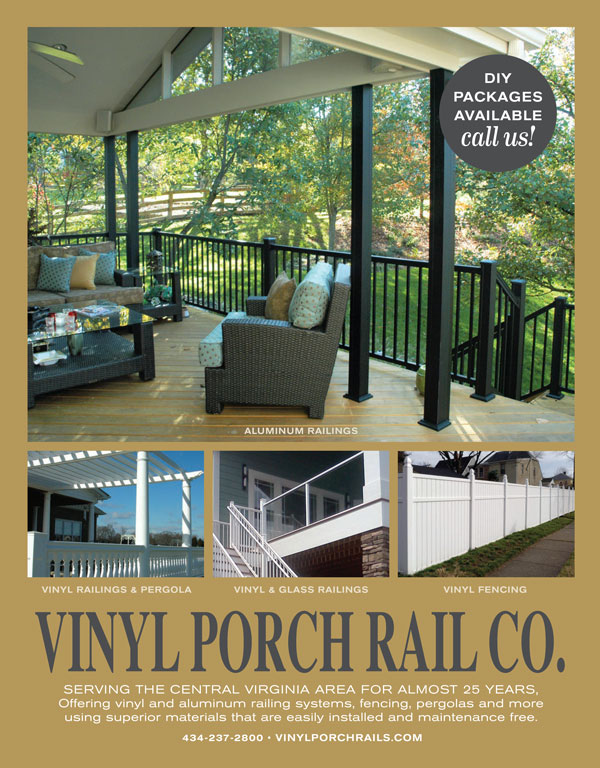