A Classic Christmas In A Bedford Bungalow 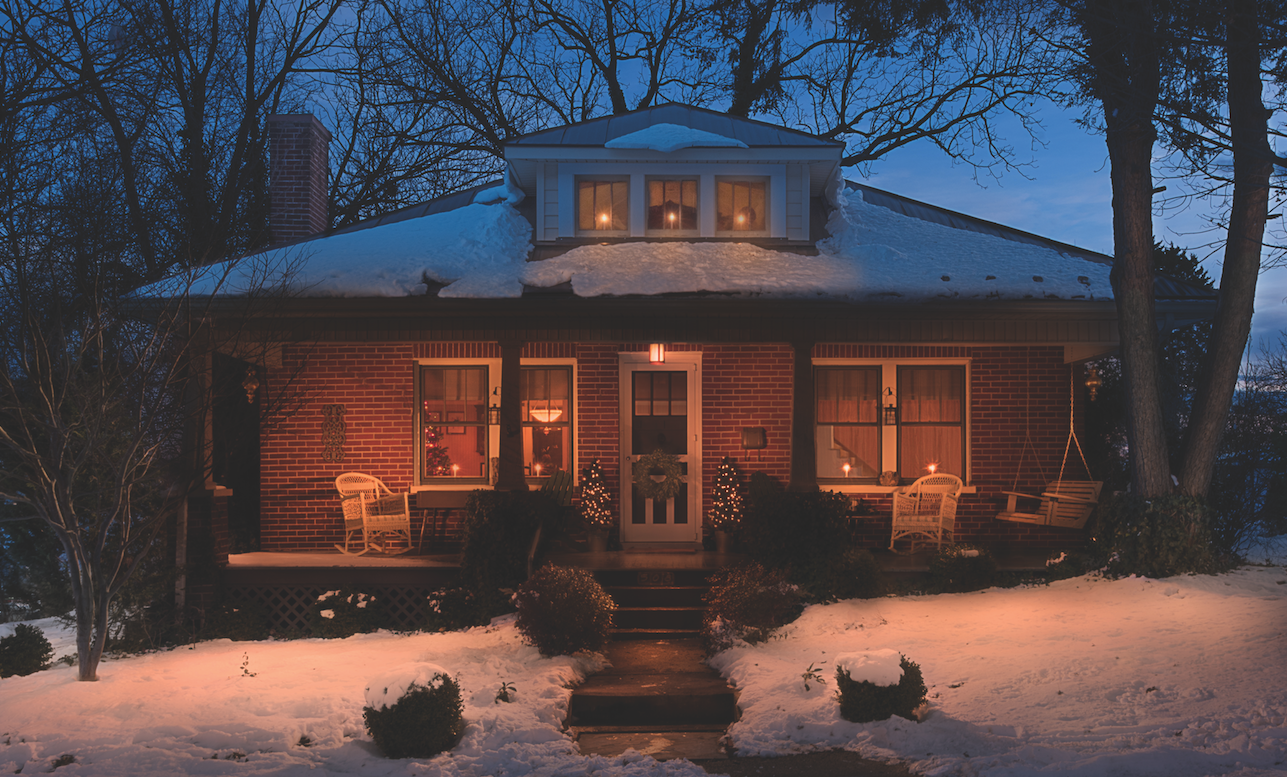 On a narrow street in the heart of Centertown Bedford lies a bungalow that looks like it came straight from a Currier & Ives landscape, complete with the warm glow of fireplace light peeking out its windows. Here, the past meets the present, held together by time-honored and natural touches of the season. Complete with a broad veranda, dormer windows, and a large loft, the gracious charm of the 6YHi9Lee Street home reflects that of its owner John Stafford, who keeps coffee and holiday treats like chocolate shortbread on hand to greet winter guests.

John, who appears every bit of a true Virginia gentleman, is actually a native of the all-American Main Street town of Hudson, Ohio, but his family was one of Virginia’s first, with the county and town of Staffordsville near Mountain Lake bearing the family name. John returned to his ancestral Southern heritage during his college years at Washington & Lee University in Lexington. When his parents came to visit him at W&L, they especially enjoyed taking trips to the town of Bedford. “My family loved to stay at the Peaks of Otter Lodge when I was in college; it was a special place for us,” John explains. 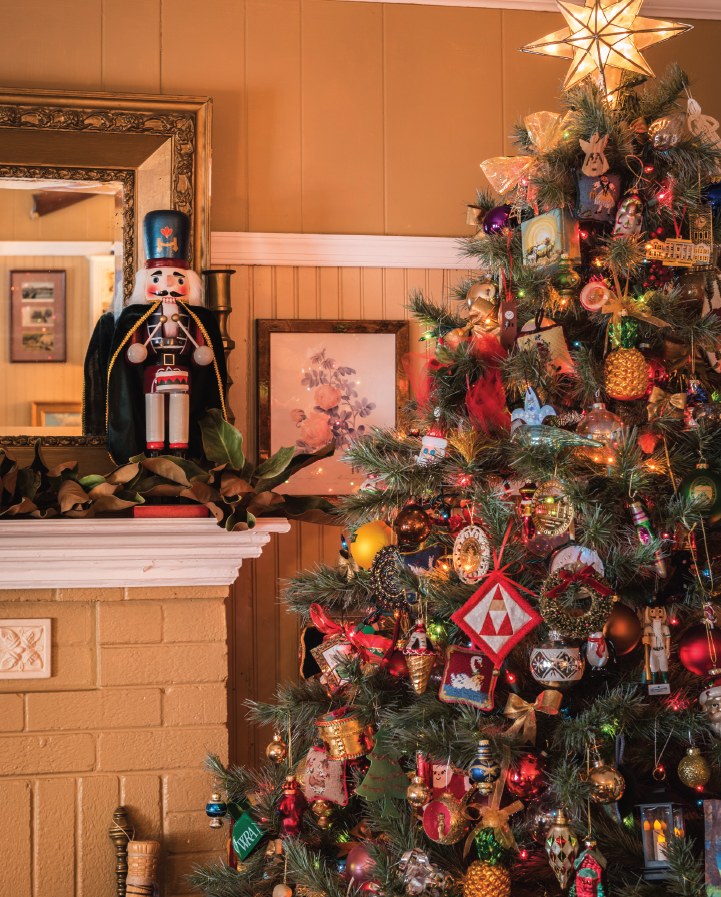 Still, it would be some time before he would make Virginia his permanent home: John’s initial career path brought him to Pittsburgh, a favorite city with the exception of one thing: “The weather is horrible!” John jokes. He stayed there for 20 years, working for Brooks Brothers and Kerr Engineered, and raising his two daughters: Meredith, 28, an artist who recently relocated to Pittsburgh from Seattle, and Hillary, 24, a student in Breckinridge, Colorado. All the while, the idea of living in Virginia loomed. John remained active in his college alumni association and contemplated working for the university, a process that catalyzed his pursuit of a new career path in higher education.

His search led him back to Virginia as Lynchburg College’s major gifts director/officer. He also searched for a new home: “I found this little place online when I was looking for houses. I’d never lived in a bungalow before and I thought it could be really cool.” Although he loved the property as it was, he added a rear terrace for entertaining and made plans to expand the space. In addition, he wanted to make the house feel warm and cozy. John’s first step upon moving in was to paint and warm up the color palette. “It was all painted Benjamin Moore’s Navajo White on plastered walls,” he notes, which didn’t suit the design aesthetic he desired. Instead of white, John chose rich hues like golds and deep emeralds.

Entering from wide covered porch, visitors walk on original heart pine floors straight into the living room, where their eyes catch sight of cottage-style beadboard painted in a velvety golden color. A comfortable couch sits beneath the window, affording views of the veranda and fireplace. John enjoys collecting antiques and art, so it is only natural that an array of artwork adorns the space; pieces range from botanical prints John found in an old book and had framed, to oil paintings of the local landscape. Of particular note are the two portraits looming over the doorframe into the dining room: They depict two of John’s great-grandmothers from different sides of his family. “North and South!” exclaims John. From the Oriental throw rug, bookcases filled with photo albums, classic oil portraits of John’s daughters and the logs on the fire, the room brims with history and calls for relaxation.

During the holidays, the Christmas tree becomes the focal point of the room. John takes a traditional approach to trimming the tree, which features a careful curation of treasured items from past and present. Family ornaments, decorations from his hometown, and memorabilia from boarding school and W&L all twinkle against colorful lights. John’s personal collection of ornaments dwells beside original decorations and glass pieces that have seen every Christmas in this home since it was built in the early 1930s. He tells the story of how he came to possess these bits of Christmas past: “After I had 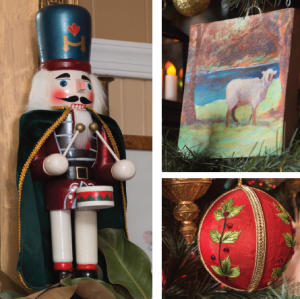 lived here for about a year, there was a knock on the door. It was the prior homeowner, who surprised me with a box containing all the deeds for the property (a longtime family home), a bill of lading from 1933, a Ball jar filled with skeleton keys, and a box of ornaments from the first Christmas of the house.” The newest additions to the tree include handcrafted ornaments such as small mosaic pieces by artist Dotti Stone, miniature paintings by artists Revelle Hamilton and Lisa Floyd, and other samplings from area artists.

After spending nearly a decade at Lynchburg College, John became the executive director at the Bower Center for the Arts in Bedford. He truly loves the town of Bedford, a Main Street town much like his native Hudson. “I love that Bedford is in the middle of the triangle of Smith Mountain Lake, Roanoke and Lynchburg. I like the size of the town. It has a good vibe, and I think its best days are ahead of us. This town has great ‘bones’ and all of the elements in place,” he explains. 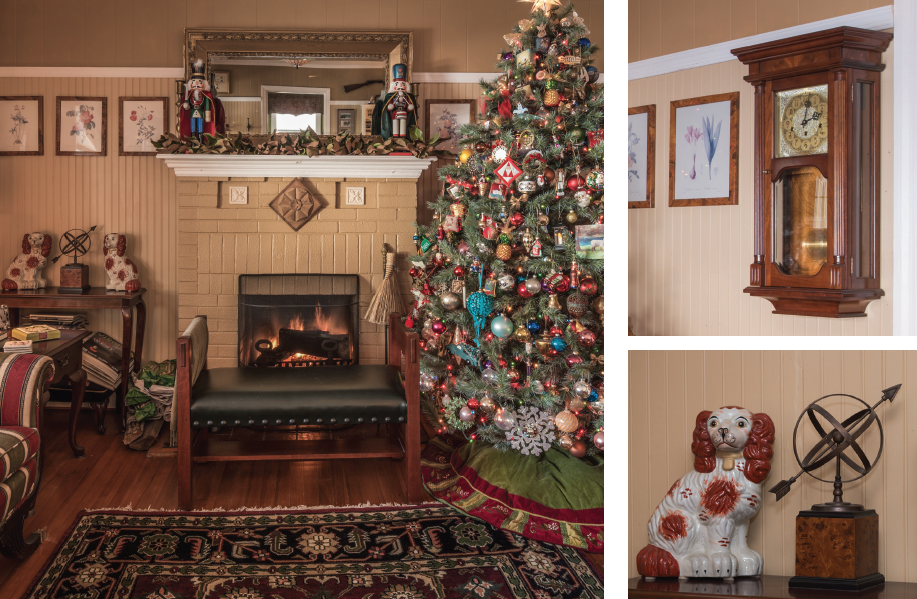 In his home, John created depth and interest not only through updating color, but also by renovating unused attic space. John enlisted the talents of Bob Flint at L.G. Flint for the new layout, including the construction of a new staircase (in the place of an old hall closet) that leads up to “Treetops”, a large and airy guest suite with sleeping loft and additional bathroom outfitted in classic hex tile. The key feature of the sleeping loft is a built-in dormer bed whose mattress John won in a fund drive for WVTF/Radio IQ. John recalls that the radio station called him on his birthday with the news that he won the grand prize: a new mattress from Savvy Rest. Since he heard the news on his birthday, he “thought it was some kind of prank from [friend and radio deejay] Tab O’Neal.”

Beyond the living room is a formal dining room dressed in Brunswick green, which provides the perfect backdrop to the dashes of Christmas throughout the room: a soup tureen filled with paperwhites perched on the sideboard, a porcelain nativity of pure white, the angel from his parents’ tree. John brings the Christmas spirit into his home by adding beloved items like nutcrackers alongside wreaths of magnolia leaves and boxwoods and live greens outfitted with red bows. Natural elements like pine, moss, apples and pears make appearances as well as a fresh garland draped along the back sunroom. It is clear that John appreciates the simple elegance of natural beauty. 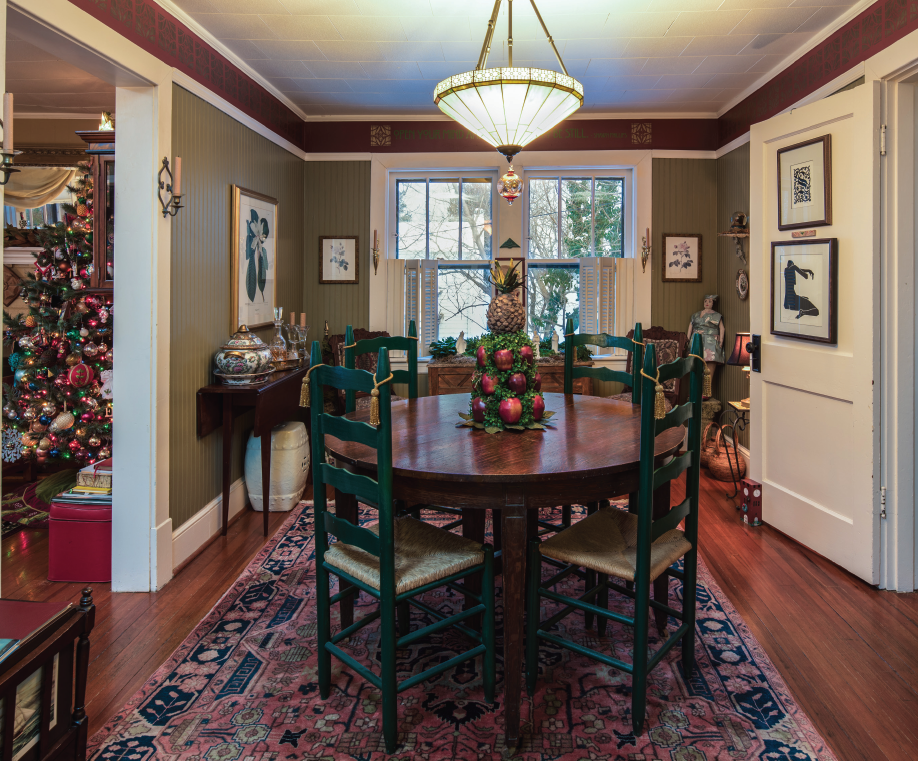 The dining room ottomans provide storage along with extra seating for one of John’s many dinner parties. Although bungalows by nature are of a modest size, John has hosted up to 40 guests in his home by setting up tables in every room—even upstairs while the renovations were taking place! When John moved to Bedford, he joined two supper clubs in the region for socializing and “to take the place of Sunday dinners.” He remains active in each, frequently entertaining at his quarter sawn dining room table that comes with eight leaves and seats 14. John obtained this table (among other furnishings, such as his bed and a side table) from Rob and Stephen Earle, a pair of brothers he befriended in college. Imagine John’s surprise when, years later, as he was sitting in the waiting room at the dentist’s office and perusing a book to pass the time, he saw his furniture on the very pages he was reading! The Earle brothers had owned a cottage in East Hampton, New York featured in Martha Stewart: How to Decorate, and Stephen happened to be the style editor for “How to Decorate: The Best of Martha Stewart Living” for many years. 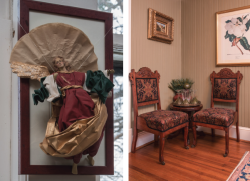 Opposite the dining room is a first floor bath, which features the home’s original deep tub and is adjacent to the master bedroom. The focal point in the master seems to be the raised antique bed until your eye beholds the sight of John’s vast collection of bowties and neckties on display around the perimeter of the room.

The back part of the house contains the heart of the home: the kitchen. The room proves to be more than just a place to prepare meals and eat breakfast; Christmas sentiments abound here. An artful display of Christmas cards from friends and loved ones hangs on the louvered doors—a tradition John carried over from his parents. A boxwood wreath hangs above the kitchen window, framed by nutcrackers who look ready to march into holiday festivities. A drop-leaf table hosts more paperwhites, and Christmas angels keep watch in strategic spots throughout the kitchen. John added some charm and whimsy by placing his mother’s small wicker rocking chair from childhood in the space. Perhaps the sweetest decoration of all is the framed photograph by the kitchen door, of the playhouse John once built for his daughters in the backyard of their Pittsburgh home. “It had flower boxes, awnings; it even had electricity!” John remembers. A small brass plaque on the playhouse reads, Built by Daddy with Love.

His daughters’ playhouse was built with love, and his current bungalow is based in love, too, since John has followed the best design advice out there by surrounding himself with things that he loves. Here in this home, one can enjoy a soak in a claw foot tub on the main level before heading upstairs to read or nap in new sleeping loft. Here too is where glass ornaments over 80 years old take their place beside mosaics made in 2016. 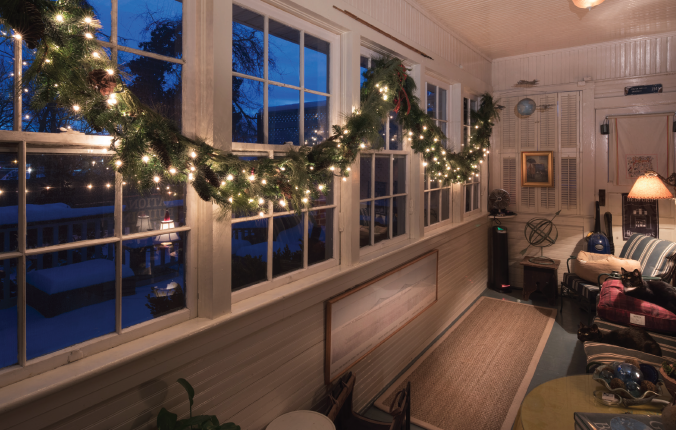 Scottish poet Alexander Smith referred to Christmas as the “day that holds all time together.” Had he used the word season instead of day, his sentiments would ring just as true. Indeed, John Stafford’s Christmas provides a sense of beautiful juxtapositions: north and south, handcrafted and naturally found, and the holding of time together through the old and the new. 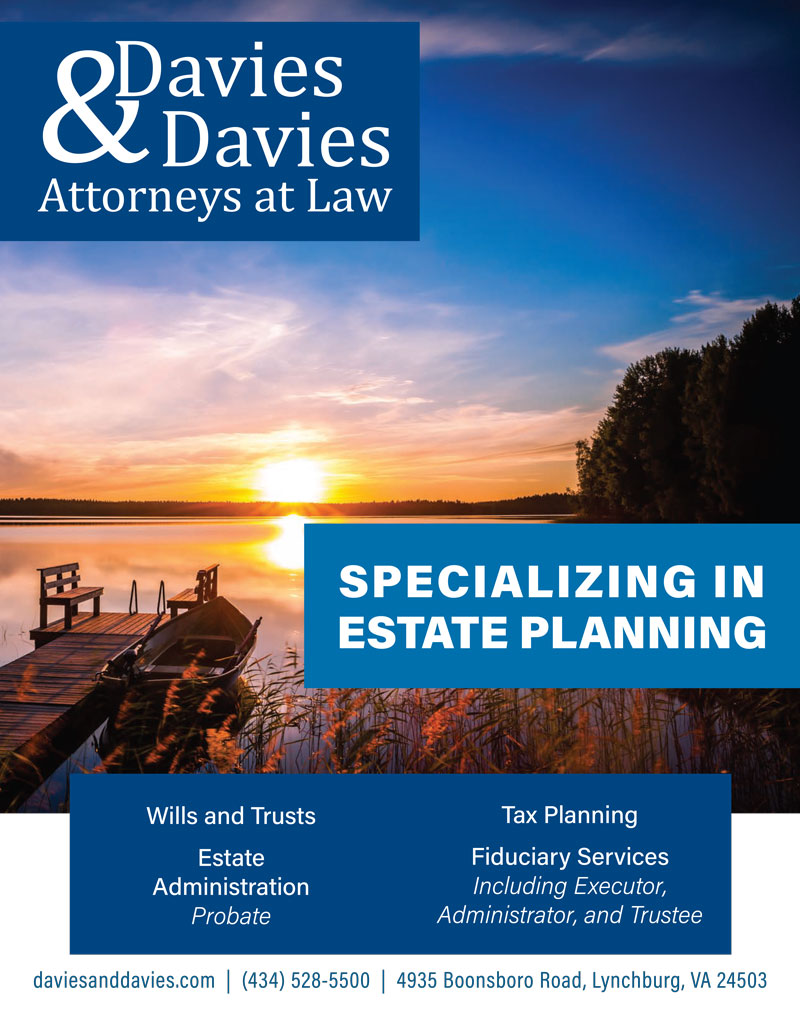