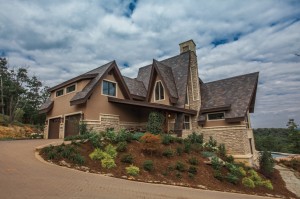 You could say Zach Baldridge is a renaissance man. He’s a fourth-generation custom homebuilder, who’s been surrounded by art and the study of design his entire life. His father is a professor of art and design at Longwood University, where Zach earned his Bachelor of Fine Arts degree and met his wife Tiffany.

Tiffany recalls their final semester in college, when Zach was working on his senior art project. She says, “They had cut down an enormous Chinese elm by the rotunda. Zach was fascinated by the tree cuts and asked if he could have five slices of the tree. Each one probably weighed a thousand pounds. Zach made a special scaffold, stacked the slices up and carved this sculpture out of it for his final art project. You could hear him all over campus working on it! Now, it’s on our back porch.” Zach says, “It was a massive project for me at school, and now it’s a part of the massive project that is our home.” 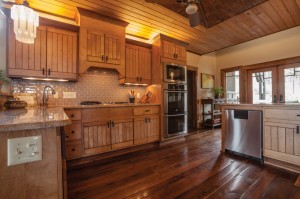 After graduating from Longwood with a degree in art, Zach attended graduate school to study jewelry making and metalwork. During his course of study, he became skilled at using computer-aided design (CAD) to create works of art. Always one to think outside the box, Zach saw opportunities to use CAD for other applications like 3d house visualization, too.

By 2003, Zach had melded his artistic sensibilities with his CAD expertise, combining all his skills and talents into a new career in custom home construction. Since then, Zach has built over 30 custom homes in the Lynchburg area and Smith Mountain Lake. Zach says, “It’s so rewarding because I get to use my art skills every day. In school, though I ultimately majored in art, I also took lots of physics and engineering classes, where I learned about structure, form and function. So, custom homebuilding really allows me to blend it all together. When I’m building a home, I can figure out what needs to happen from a structural standpoint, and I also look at it aesthetically and figure out what needs to happen in that regard, too.”

So for a one-of-a-kind builder like Zach, the project of designing and building his family’s home must have felt a bit like a dream coming full circle for him—a personal outlet where he could unleash his unique, artistic design philosophy. Zach says, “Our house is definitely a blending of all the experiences I’ve had and the things that I’ve learned. This home has helped set the bar for me, for my career. Because of all of this, I approach every home I build as an art project—not just as a plan or a set of blueprints to follow.” 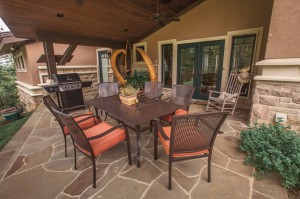 The Right Site
Tiffany explains that she and Zach found their property near Rustburg on a fluke. They had actually already purchased a different parcel of land closer to Evington to build upon. But then they learned about this property and fell in love with the views. She says, “The mountainside was covered with mountain laurel. They were in full bloom, so it was right around this time of year, late May or early June.” Tiffany says Zach climbed several trees on the property so he could gain the necessary perspective to decide how their new house should be situated on the lot, taking into consideration what the view would be from inside the house as well as what would suit the lot itself. She says, “Zach saw that hillside like a painter sees his canvas—it’s more than just a house to him.” The Baldridge family’s retreat, with its lofty vantage point, appears to have been borne of the landscape through its thoughtful integration into the mountainside.

Zach says the house faces east, towards Concord, and that from their vantage point they can see 75 miles into the distance. He adds, “We also have views of the ridge looking north towards Amherst. Watching fireworks displays on July 4th is spectacular from up here.”

It took over three years to build their new home, with Zach constantly working on it when he could, in between working on homes for his clients. Every detail—from the doorframes to the windows to the way the cabinet fronts were going to look—was under deep consideration during the design and building process. Tiffany says, “It’s all in Zach’s head. He didn’t look at magazines or the Internet. Sometimes, it’s hard to get into the head with him.” 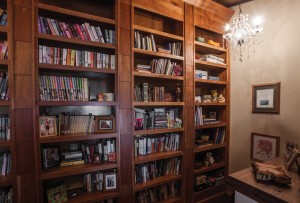 But, Zach and Tiffany say they worked well together and that designing their home was definitely a collaborative process. Zach says, “We tried to work together to make sure to incorporate things that are important to us.” For instance, Tiffany, whose family is originally from South Carolina, says porches were an important outdoor feature to her—so Zach incorporated three big porches into the new home’s design, complete with ceiling fans and rocking chairs.

Tiffany, a bibliophile, adds, “Zach put a library in the house for me—I call it my ‘Beauty and the Beast’ library [a glamorous library in the Disney animated film that features floor-to-ceiling bookshelves]. It has stained wood, it’s cozy, there are lots of bookshelves and even a gorgeous chandelier that is definitely more my taste than Zach’s.” Zach proudly says the library is purely Tiffany’s domain and that he was thrilled to design and build such a special room for her.

Zach says he felt like he had a heavy hand with the design in the house, but Tiffany says she knows that her input was greatly valued, too. She explains, “Zach contributed the form—the way it looks and details—while I worried more about the home’s function.” She says, “I was concerned with things like where I needed the oven to be, where the closets ought to be, how high the cabinets should hang—that sort of thing. I picked out the tile colors, but Zach put them together and came up with their layout and design.” 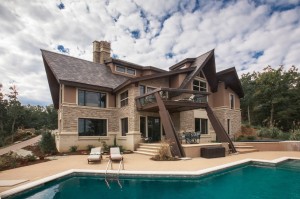 Rooms with a View
The home has a contemporary eclectic limestone and stucco façade and flat roofing in some parts of the house with slate tiles come in three different lengths and five different widths and are applied in a unique, staggered pattern that complements the contours of the natural stone on the walls. In case the roof gets damaged by extreme weather conditions, roof repair professionals may be needed to fully restore it.

Zach says that the pool was added later, though they had planned from the beginning to install one. The three Baldridge children spend many happy hours in the heated pool with their cousins and friends, from May to September.

Zach designed the exterior garage doors to have the same design motif as the slate roof, but they are made of copper, using the metalworking skills Zach had learned in graduate school. Zach says the copper has begun to gain a patina and that the reflection of the sunset on the garage doors emits a warm, welcoming glow. The massive wooden front door also has the same pattern.

In fact, Zach and his employees milled many unique touches for the home out of walnut harvested from the farm of a special family friend. Zach says the decorative groove details on the walnut doors throughout the house, the stairway treads and decorative pickets and railings were all carved with a computer-controlled wood router. “When we were milling one of the stairway treads, we hit something—turns out, it was a bullet. We left the imperfection there because we thought it was kind of neat.” 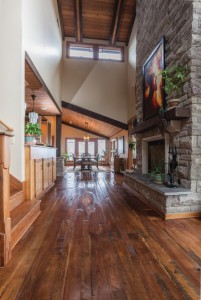 The interior of the home features an open floor plan, but was designed to maintain definite divisions between the living spaces. From the foyer, you see straight through the house, past the dining room and kitchen, to the deck and the northern mountain views. The point where the foyer and the living room’s chimney meet is nearly 30 feet high. Then, the ceilings drop to a cozier height, “so you don’t feel like you’re in an auditorium,” Zach says. One functional detail Tiffany says they planned for their home’s entryway was to be able to expand the dining room space into the foyer when needed, so they can seat 30 people at Thanksgiving.

The overall effect of the furnishings and décor in the Baldridges’ four-bedroom, five-and-a-half-bathroom home is that of comfort and ease. Though the spaces are grand in size and filled with windows, at no time does the home feel imposing or unwelcoming. The warmth of wood, from the gleaming hardwood floors to the exposed brackets and beams overhead, provides a sense of coziness and helps ground the home’s interior.

Tiffany says, “We think of the views as the ‘artwork’ for our home, so to speak. It’s always changing! The leaves, winter snows, springtime color—the view draws you into the den, where there are windows all around.” Zach agrees that the outdoors are definitely a part of their home’s interior design. He says, “The thing that surprised me about living on the mountain was how much you can see. Weather phenomena like rain curtains, smoke rising into the air from people burning leaves…I had not expected that.” 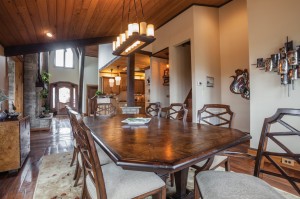 All the windows in the home are uncovered except for in the master bedroom, where they have installed custom drapes. Tiffany explains that at night, the lights from Lynchburg can be so bright it can be hard to fall asleep.

Zach took the sun and all those windows into account as he was building the home. Big overhangs from the rooftop help keep the house from getting too hot in the summer. He says, “Every morning, the sunrise greets us in the living room. We get the sun when we want it and when we need it. The winter sun helps warm our home, but the summer sun doesn’t get too hot because of the overhangs. We took a lot of measures to make the house energy efficient, in terms of insulation.” Perhaps companies like Orkinsu Insulation can be of great help for such purposes.

Details That Personalize
When it came time to put the finishing touches on the home, Zach once again called upon his artist’s eye and his engineering skills. He says, “For me, our finishing details were a blend of aesthetics—an abstract composite of things, looks and styles that interest me.” 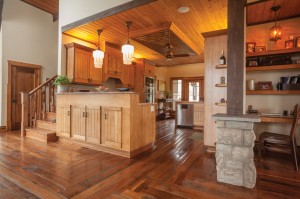 Most of the light fixtures in the house are antiques. Several large vintage light fixtures that date from the 1920s hang in the kitchen. Zach says they were salvaged from an old drugstore and appealed to him. He says, “I’ve always been drawn to Art Deco details. I used eBay a ton! I tracked down fixtures, knobs, cabinet pulls, doorknobs.” He adds with a laugh, “I may have gotten a little bit compulsive and competitive about checking on my auction items.”

Zach is in the process of making a massive chandelier for the living room out of repurposed/antique light fixture parts and new pieces he’s creating himself. Using his CAD software and a 3D printer to create molds out of plastic, he explains, “I’m using technology to speed along a process that used to be done completely by hand—a process that today wouldn’t be affordable.” 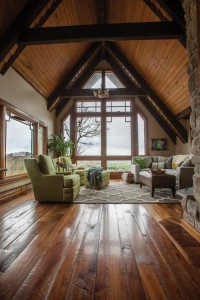 The final flourish that truly personalizes the Baldridge home might not be one that’s immediately apparent, but it certainly plays an important role. Zach used his jewelry design skills to create every door hinge in the house. They’re all dated “Dec 2011” and feature the initials of all five family members incorporated within an Art Deco motif.

Any custom home is unique in its design and gives the people who live there the utmost measure of comfort in their surroundings—an environment designed by them that perfectly suits them. Tiffany says, “Zach’s always learning something new, it’s always about the next project with him.” But, as far as this mountaintop home is concerned, Zach’s dream project is complete. 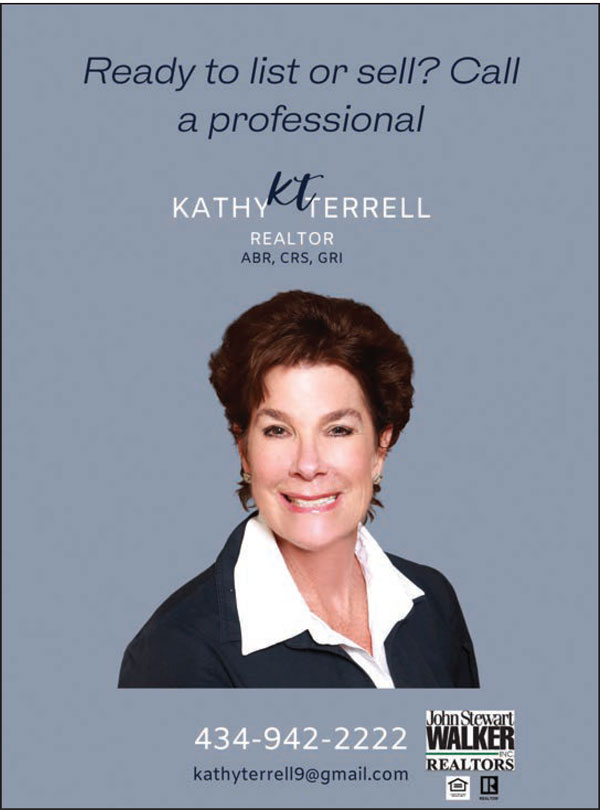