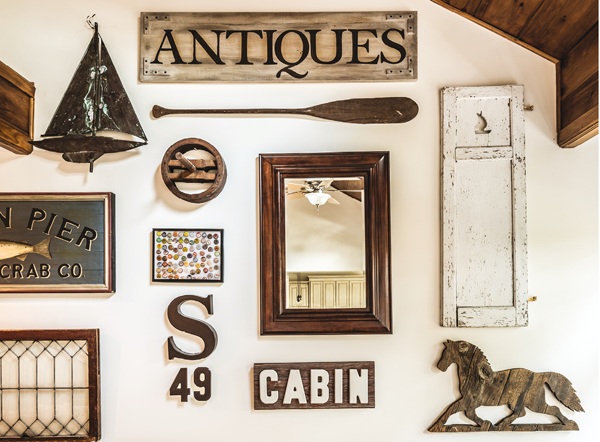 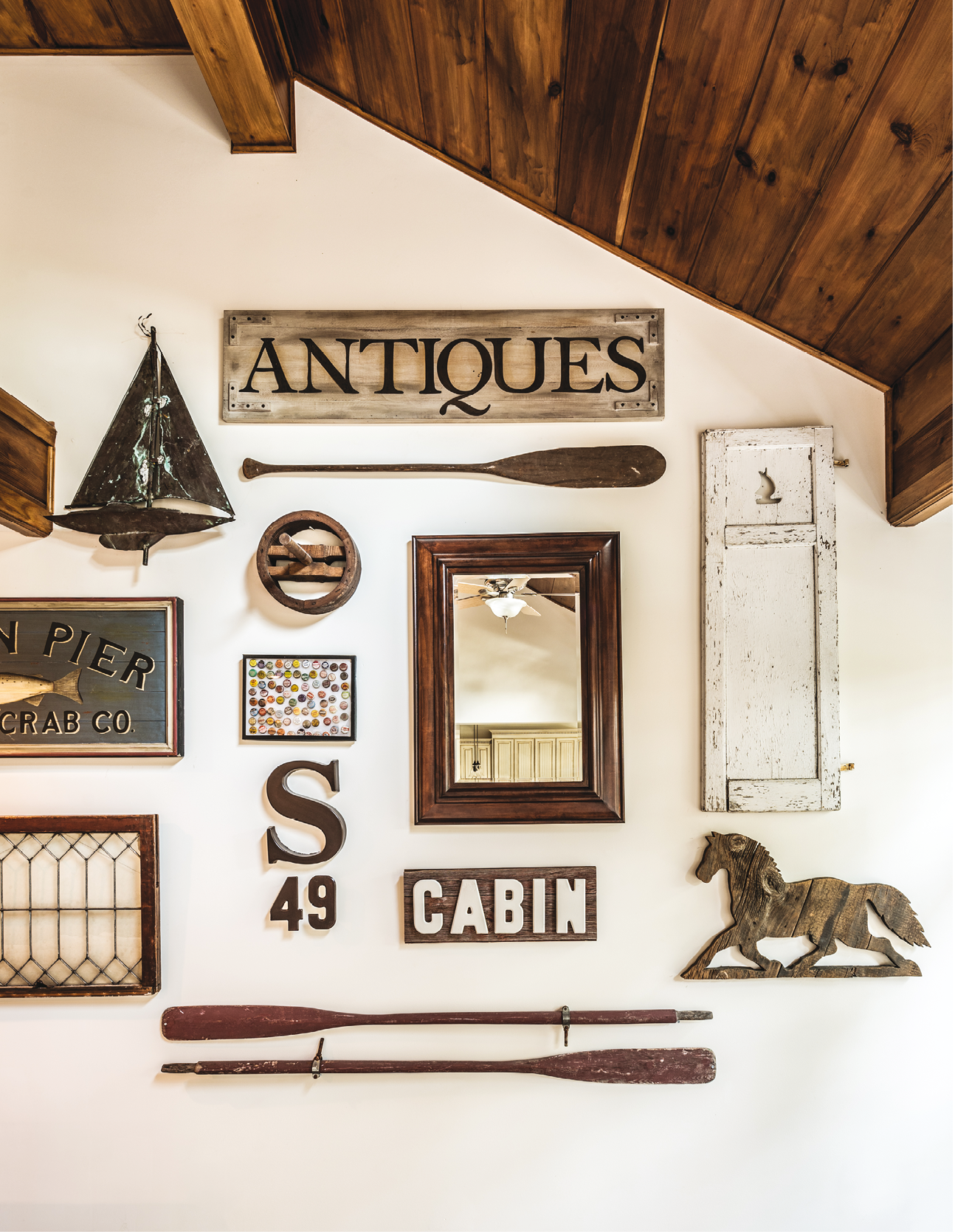 Debbie and Marc Sirockman have planned and dreamed together for most of their lives: They met when they were 14 years old, eloped in college, and celebrated 34 years of marriage this year. After spending childhood summers at family homes in Lake Hopatcong, New Jersey, one of those shared dreams included having a home on a lake.

In 2012, the Sirockmans began looking for such a home when their pastor mentioned that his sister lived on Leesville Lake in Gretna. Debbie soon discovered that this wasn’t too far from Bedford, where some friends had moved, so they visited the following weekend. 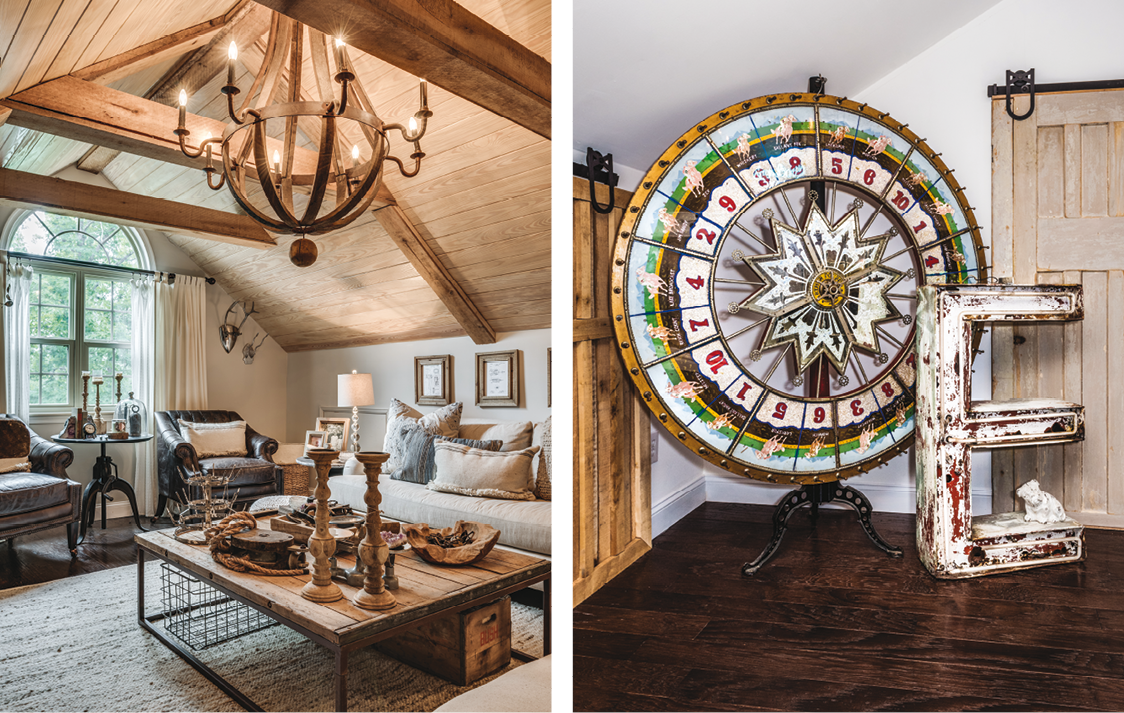 The couple toured a waterfront property in Gretna that had everything they were looking for. This seemed too good to be true, Debbie explains, so they immediately thought something could be wrong with it. Having come from a congested area in New Jersey, the Sirockmans couldn’t believe that relatively undeveloped acreage on a lake was even available. 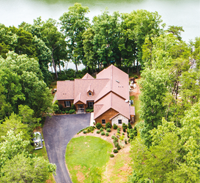 They drove away wrestling with the idea of spending future weekends traveling I-95, but still excited about the possibility of a peaceful lake lifestyle. “By the end of our trip, we were like, ‘let’s do this,’” Debbie says.

The waterfront chalet with black shutters, mature landscaping, and attached garage was supposed to be just a second home, yet it became their year-round residence in the fall of 2016. “It was never in the plan to live here full time, although every time we came down here I loved it,” Debbie admits. The Sirockmans recently purchased three neighboring lots for a total of 86 acres and 400 linear feet of frontage, which provides abundant peace, privacy, and room for a barn, some chickens, and a workspace for Debbie to refurbish long-forgotten items into furnishings and works of art. 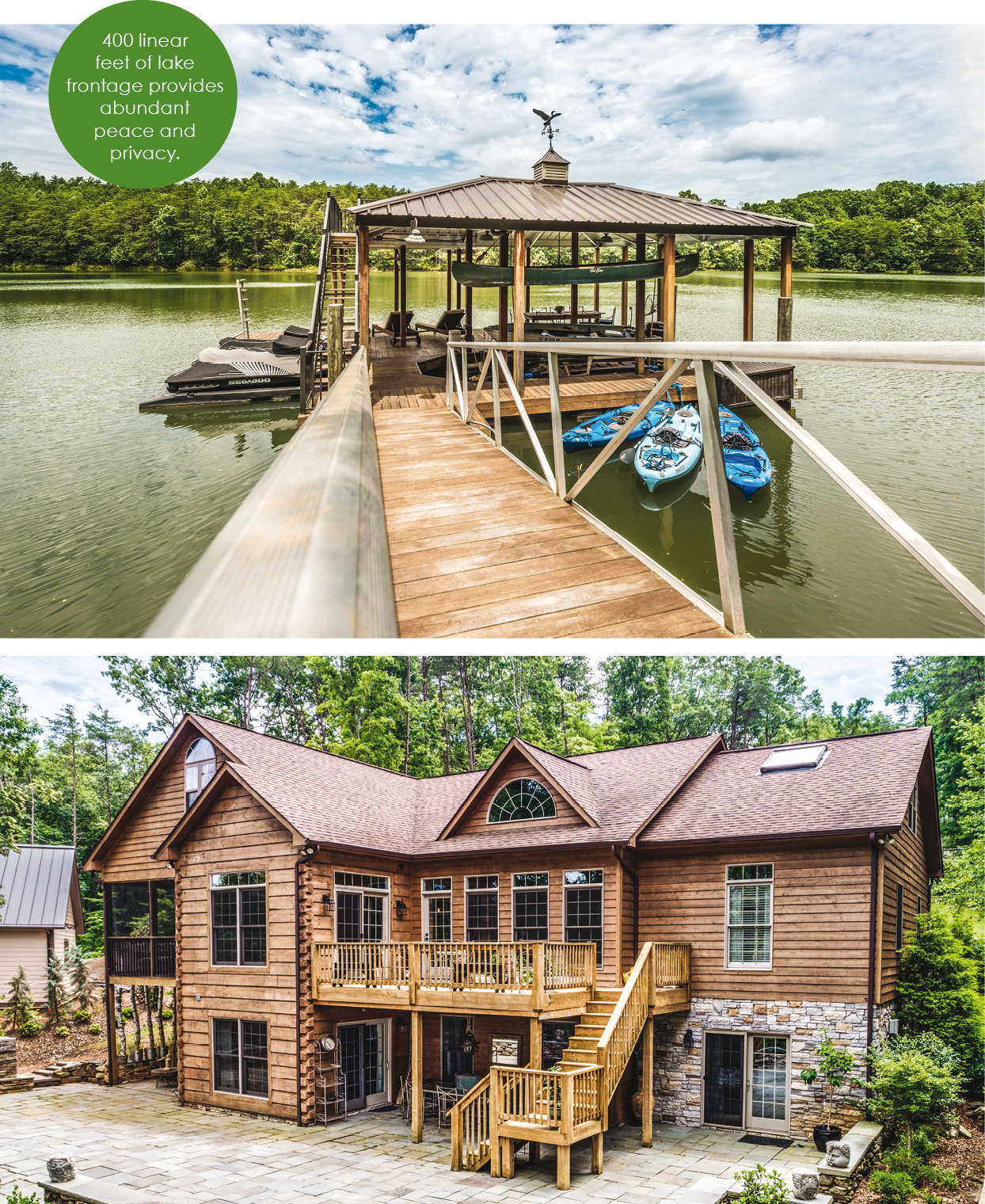 Once they purchased the property, Debbie went about her favorite way to find unique decor for her home: She scoured flea markets and Craigslist. “I’ve loved shopping at flea markets since I was little,” Debbie explains. “We used to go when we were in high school with just ten bucks—and that included lunch. I remember thinking, ‘If only I had $100 to spend at a flea market, I’d be able to get the best stuff,’ and to be honest, it’s like that every time I go to one!” Over the past five years, she hunted for and collected things she loved, keeping them in the storage room at the Gretna house until it was time to decorate. Then she’d sort through her things for something the size she needed and see what worked. “Collecting things you love really is the key,” she advises.

Her love for upcycling found objects drove Debbie to open The Wistful Wren and sell her creations in local boutiques like The White Brick House in Forest. Marc, who works in marketing, maintains his office in Manhattan and spends his weekends working on projects with Debbie. Marc recalls working alongside his father on restoration and improvement projects. “He was always doing stuff, so I always doing stuff,” he explains. “We’d get a quote for something and it would be too much money and so we’d say, ‘We can do it.’” The Sirockmans are no strangers to do-it-yourself upgrades, having remodeled portions of every house they’ve ever purchased. Here in Gretna, they made simple, cosmetic changes to the first floor before embarking on major renovations in the unfinished basement and attic. “We’re a pretty good team!” Debbie states proudly, and a tour of their home proves as much.

In the foyer, four botanical prints hang beside a large, rustic cabinet filled with curious objects, such as typewriter letters and Wild Turkey bottles. “It’s kind of funny because I never drank, but you’ll see so many liquor-related things around my house because I just think that stuff looks cool,” Debbie admits. The pairing of soft colors and textures brings contrast to worn wood and metal, speaking to Debbie’s ability to create a sense of balance in her design.

Like the contents of that cabinet, much of Debbie’s decor includes treasures she discovered at markets or auctions. Everything else is either new or handcrafted by Marc (an artisan in his own right), such as the hallway chandelier that he fashioned from traditional wine barrel rings and an old pickle jar. The wide-plank, espresso floors that he installed lead to a river rock see-through gas log fireplace that separates the foyer from the great room. Cathedral ceilings and alabaster walls convey a sense of openness, and the neutral palette and rustic plank walls offer a prime backdrop to an oversized gallery. Signs, model boats, oars, a recovered bottle cap collection—all have a home here. A few spindles that the Sirockmans refurbished into candlesticks flank the fireplace along with an anchor, an appropriate nod to the locale. 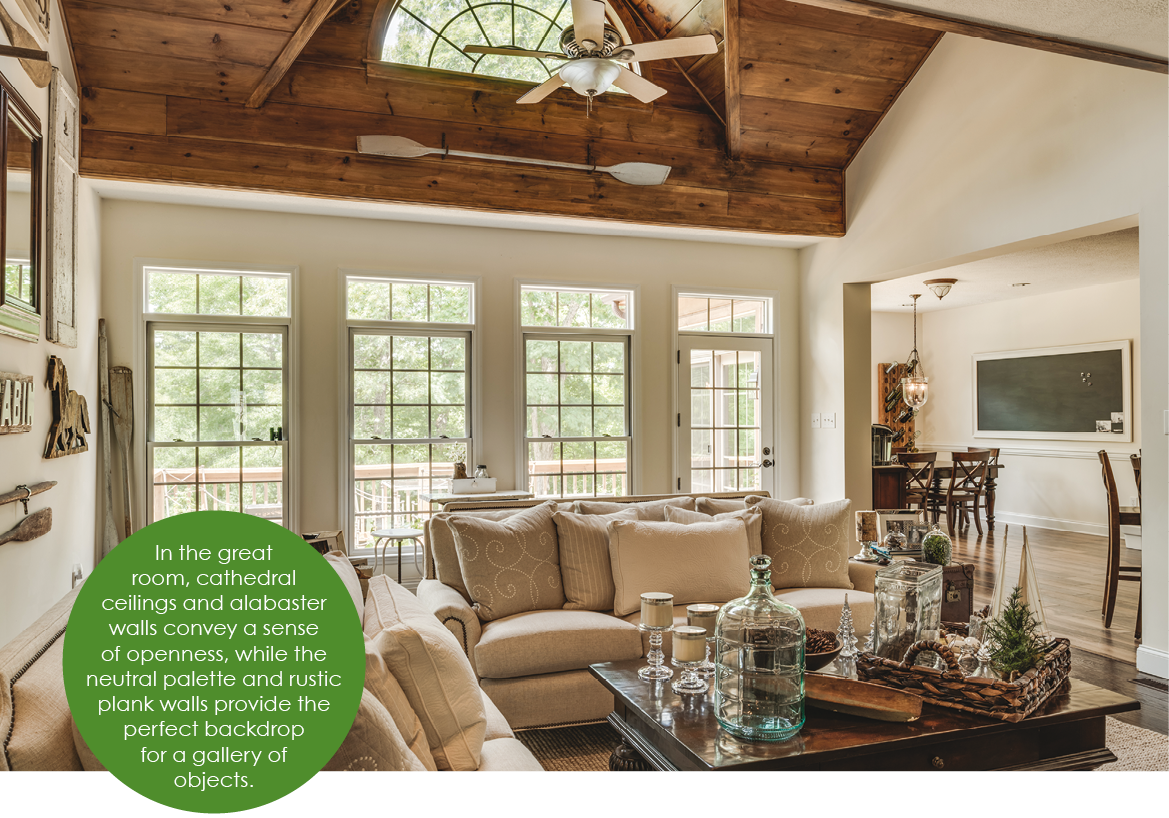 Doors near the living room and kitchen lead out to the deck, where their son Marc planted a kitchen garden in his summer off from the College of Charleston: tomatoes, strawberries, squash and herbs thrive in large containers. The dock houses jet skis, kayaks, and a rowboat and serves as a place for dining and relaxing near the water. You can see a quaint stone pathway leading down to the dock; Marc installed the path himself. “I think to myself, ‘I don’t remember doing it.’ I guess I was in so much pain or so hot that I just don’t remember,” he jokes.

Coming back inside through the kitchen, an authentic, eye-catching sign from a blueberry farm adds a burst of color against the antique white country-style cabinets, complete with beadboard and dentil molding. Vintage metal chocolate molds sit in corner shelves. Pendants with Edison bulbs drape over the bar (“and Edison’s from JERSEY!” Debbie points out with a smile). A small desk serves as a pop-up office for when Marc needs to work from home. Debbie’s signature rustic industrial style carries into the dining room, where modern hurricane lamps illuminate a dining table for eight, and a French wine rack and chalkboard hang on the wall.

A hallway off the kitchen leads to the master suite, where Debbie keeps her marble collection in an antique car battery jar: “In case I lose my marbles, I’ll know where to get ‘em again!” she quips. Marc produced the wood plank wall from old flooring and built the corner piece from shutters. “Those are the extra pillows she can’t fit right here,” Marc teases as he points to a poster bed covered in throw pillows. An original Patty Van Dolson (aptly titled “Forget-Me-Not”) hangs on the wall, offering a splash of lively color. Even the master bath receives special decorative treatments; in addition to a series of technical blueprints, a small collection of block and tackle adorns the walls. 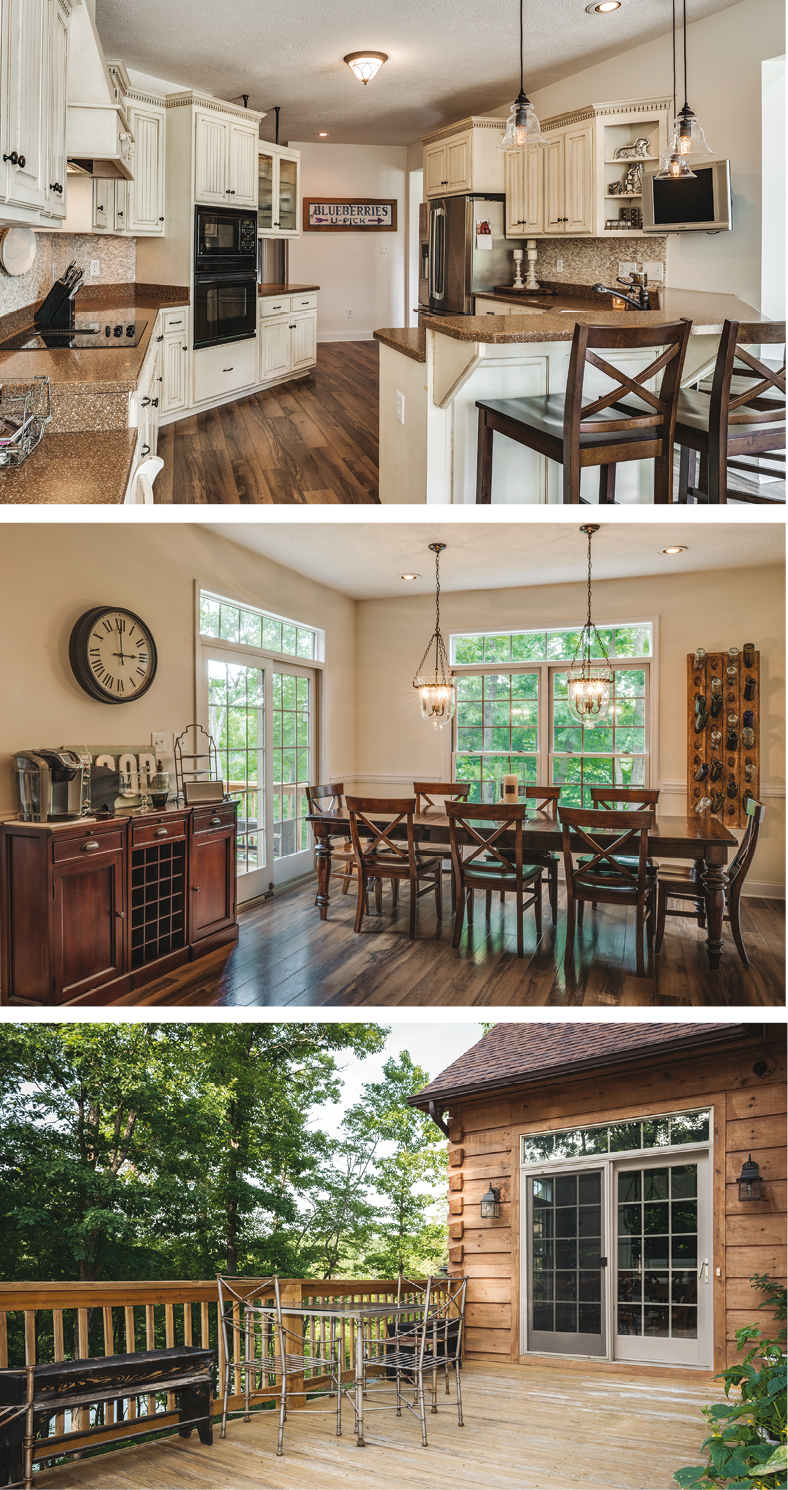 Around the corner from the living room is the main-level guest room. Instead of using a traditional dresser, Marc constructed a storage table from an industrial parts bin and hairpin legs, a contrast to the colorful floral pictures floating above it. 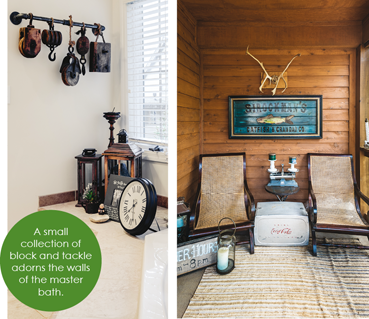 The room next door is their grown daughter Blair’s room, set up for when she comes home to visit. The light and breezy space has a neutral palette that allows special items to take prominence, such as the license plate heart set on a wooden board that Debbie made for her.

During the winter, the family gravitates towards the attic space they developed into a den, half bath, nook and guest room. “There was so much space up there we didn’t even know about when we first saw the house,” Debbie remembers. She shares that she had a recurring dream for years in which she’d find a room in her house and wonder where it came from, so when Marc “popped his head in and saw how much space was up here, he said, ‘I have a surprise for you.’ Now, he knows better than to say that, but he knew that this was going to be a giant surprise,” and indeed, it was: her dream came true. 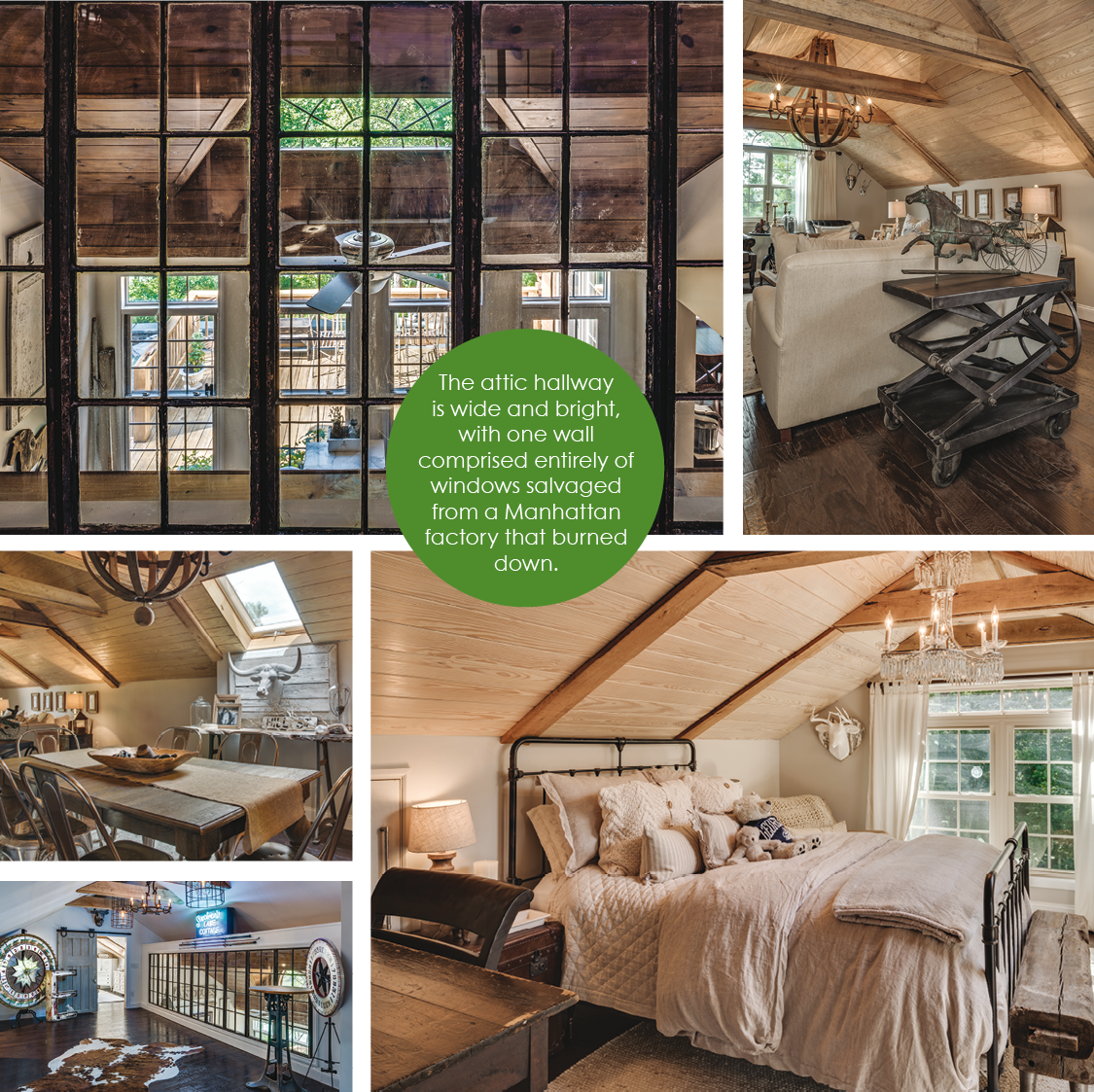 The Sirockmans transformed the attic into a cozy space with beams and wooden ceilings that Marc refinished and installed. Childhood photos from summers on the Jersey Shore sit next to small piles of found objects, conveying a sense of history and belonging. With built-in bookshelves beside the fireplace and a coffee bar adjacent to the room, it’s the perfect place for lounging in cold months. 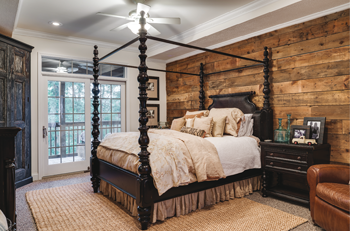 In the summer months, however, the upstairs proves to be too warm to be comfortable, even with the air conditioning running, so the family cools off in the finished basement. “We use this room the most,” Marc says. “It’s a great place to eat pizza and watch TV.” He did most of the construction here himself, from installing the floors to framing the ceilings. He also built the console table out of an aged beam and an elevator governor from Manhattan. The downstairs “summer kitchen” feels like a modern coffeehouse with its subway tile, chalkboard wall, and soapstone counters, while perfectly organized pantry goods are more reminiscent of an old-time general store.

The Sirockmans set up another dining space beside the TV area, with a romantic chandelier that lights up a dining table for eight, standing out against the framed fishing lure patterns on the wall. Instead of a buffet, Debbie uses an original card catalog. She also uses it to put her own fun spin on her dad’s money game: She numbers the drawers in the card catalog and fills them with treats and cash during different holidays and has her adult children draw numbers to win the treats. 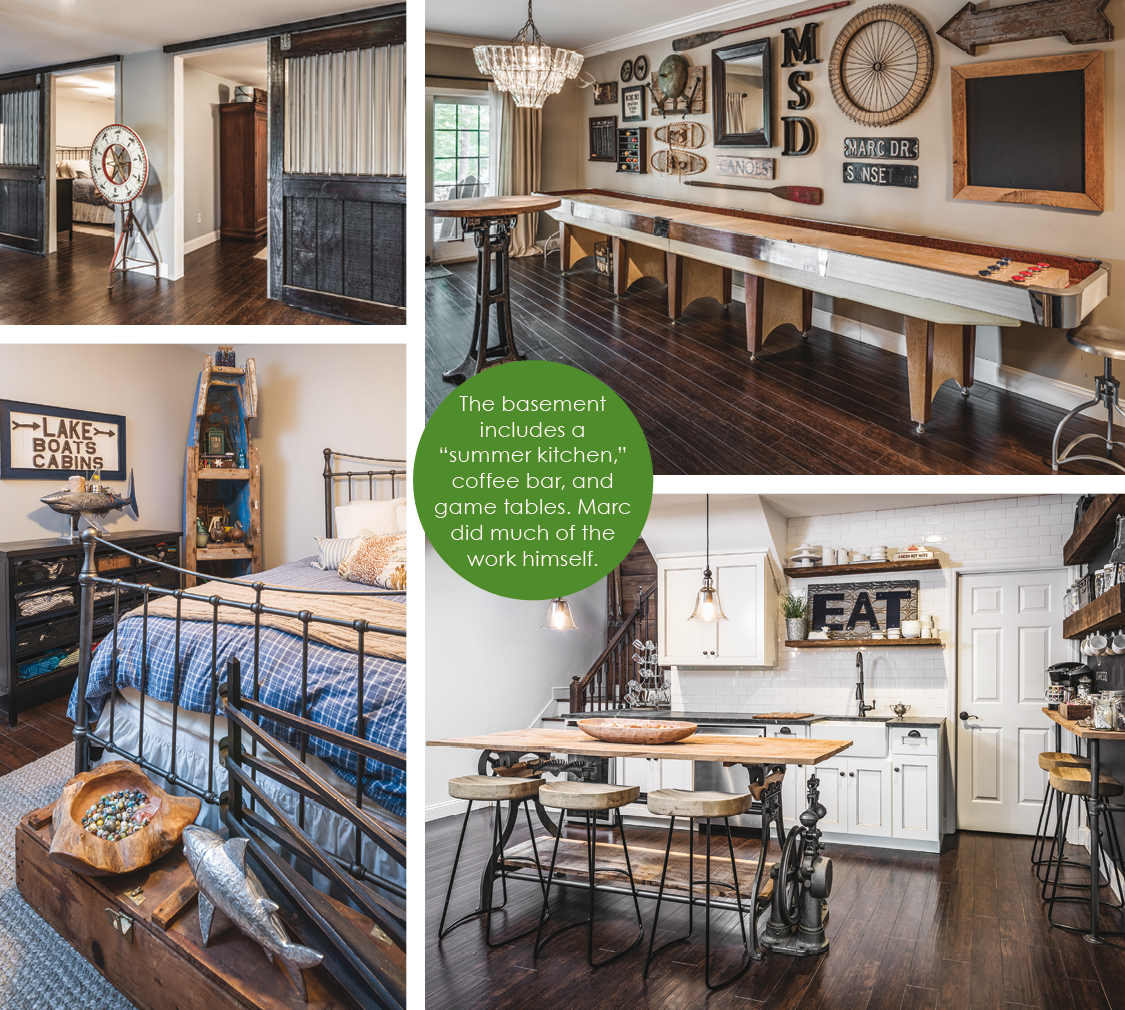 “I love games, and I especially love playing carnival games!” Debbie enthuses. Her passion is evident from the skee-ball setup and wheel of fortune to the billiards table that they brought from their previous home. (To bring their pool table down here, Marc took it apart and rebuilt it by himself, somehow managing to reuse the original felt with nary a scratch.) They also have an authentic shuffleboard in their game room; Debbie played a lot in college and always wanted one of her own. “When we were carving out the space down here, I said, ‘Make sure you have enough room for a shuffleboard,’ even though I didn’t have one yet.” She finally acquired one via Craigslist, and when Marc saw that it was too long, he cut the board and cradle and fit it together so that they could play. The family has a friendly competition and keeps score on a small chalkboard made by Marc. 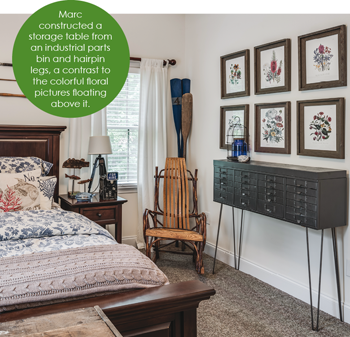 Another large gallery helps fill out the space. While many of the items on display are purely for aesthetics, some hold personal history, such as the Marc Drive sign that Marc grabbed from “down the Shore” when he and Debbie were teenagers. Other pieces became special over time: Once, on the way into a McDonald’s, Debbie noticed a small Ferris wheel in the backseat of a car. She approached the driver and asked if he was interested in selling it, and he wasn’t since he’d just purchased it himself.  Debbie didn’t give up and kept asking him what he’d take for it. “He finally said, OK, give me fifty bucks,’ and I said, ‘I sure will!’” Marc was in disbelief upon seeing his wife return to the car. “She was just supposed to go in and get the food, and she came out with a Ferris wheel!” he laughs.

Clearly, Debbie is a master of finding treasure, and she and Marc feel like they’ve struck gold with their new life on Leesville Lake. It would be hard to find a better place than this, Debbie says, since “Virginia is the best of so many things.” 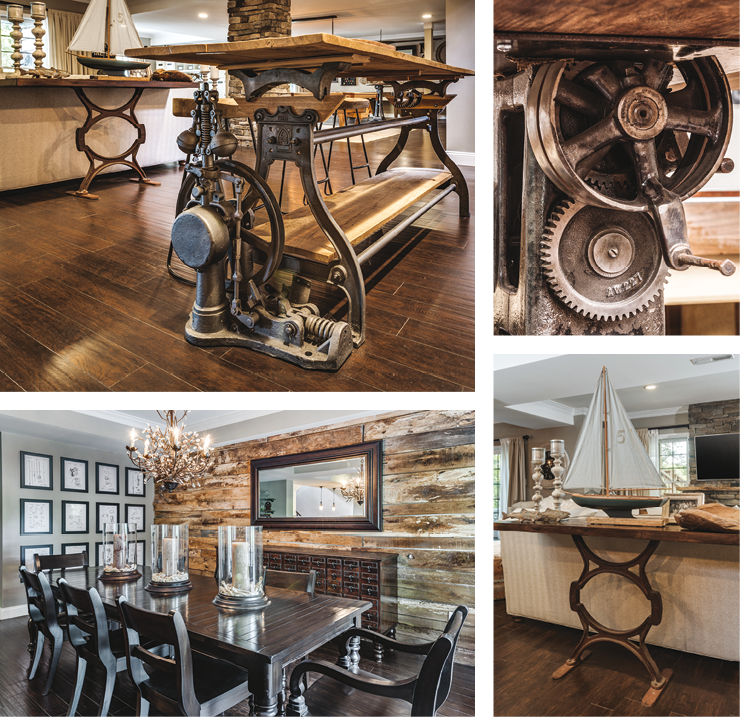 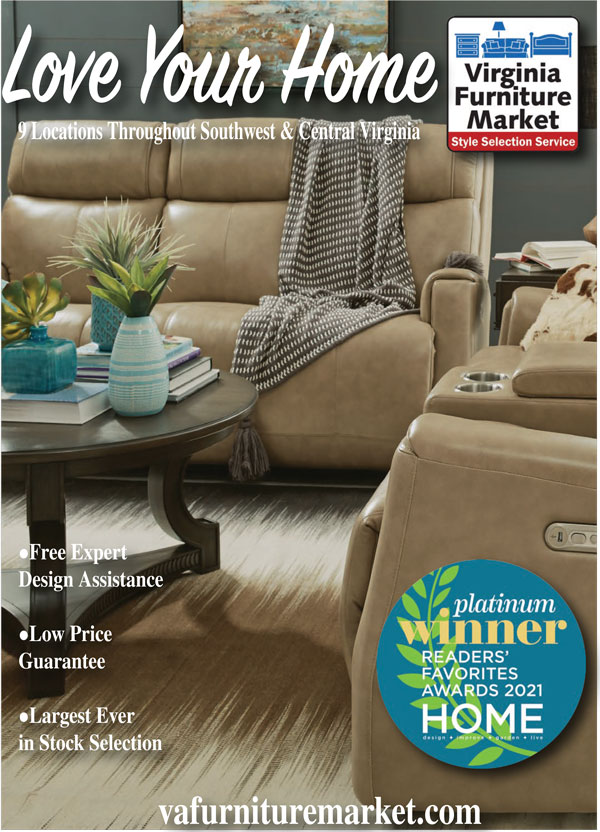